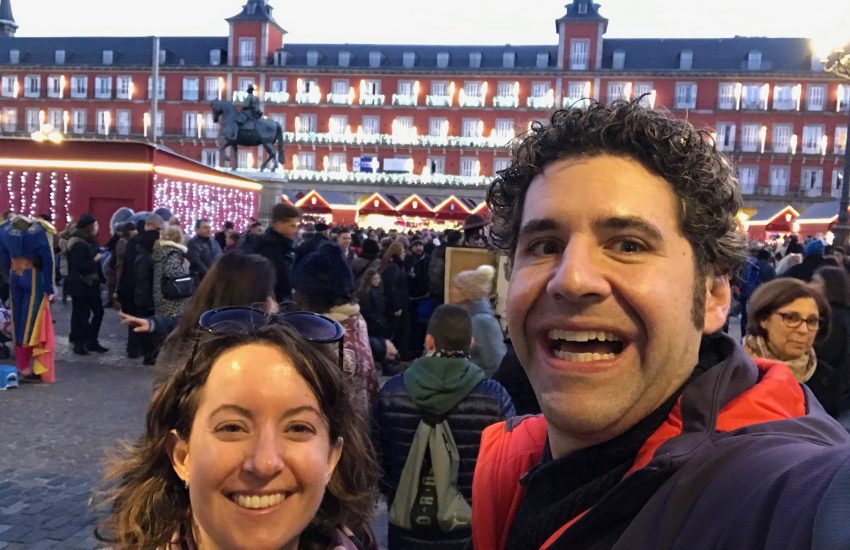 We spent our second Spanish Christmas in Madrid, a city that really embraces the holiday spirit.

We were excited when we learned a Catalan couple living in Madrid was hosting traditional Catalan holiday dinners. We enjoyed the typical food and drink, but let’s be honest: our favorite part was singing the Caga Tío song.

For our part, our stable of caganer were ready.

Also in season? Nativity scenes. The kind a caganer might inhabit. They’re kind of a big deal here, in case you didn’t know. We went to an exposition featuring pieces from around the world, as well as a pretty elaborate locally-crafted example.

And about that giant nativity scene at the end… They had Doer at “articulated.”

They had that kid in the video, too, imploring his mom to look how pretty this is.

Knowing that the season was coming, we planned ahead and booked seats on the very popular Naviluz, a double-decker bus that goes around the city center looking at all the different Christmas lights. We got great seats on the top of the bus, which was great until about 45 minutes in. 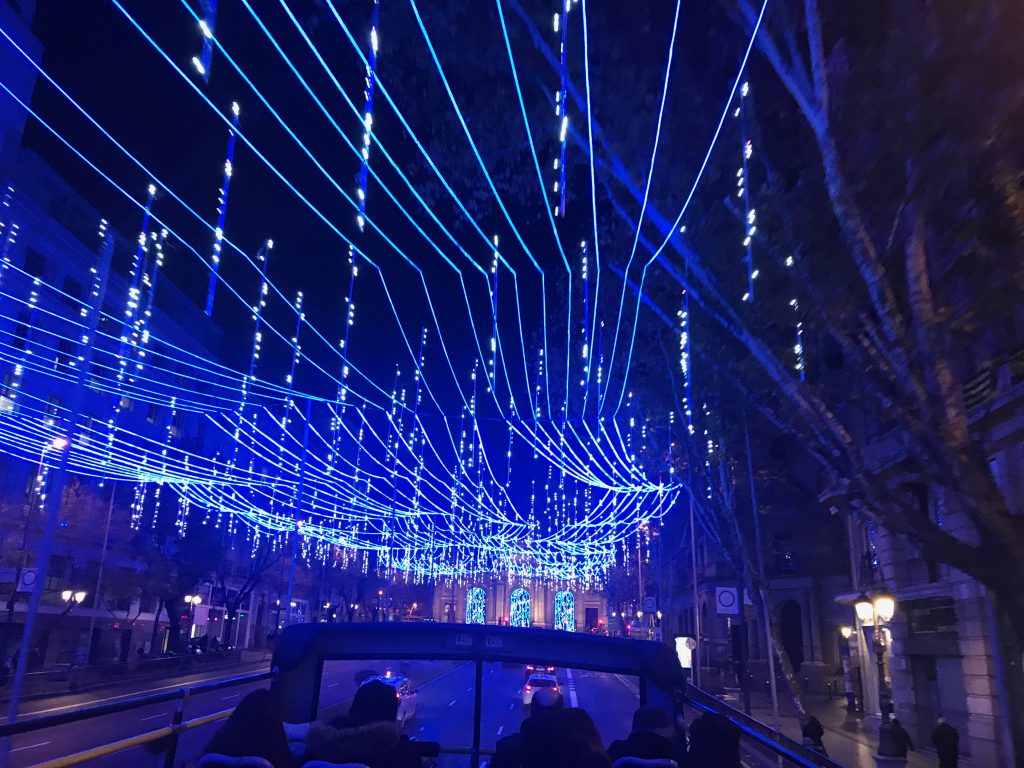 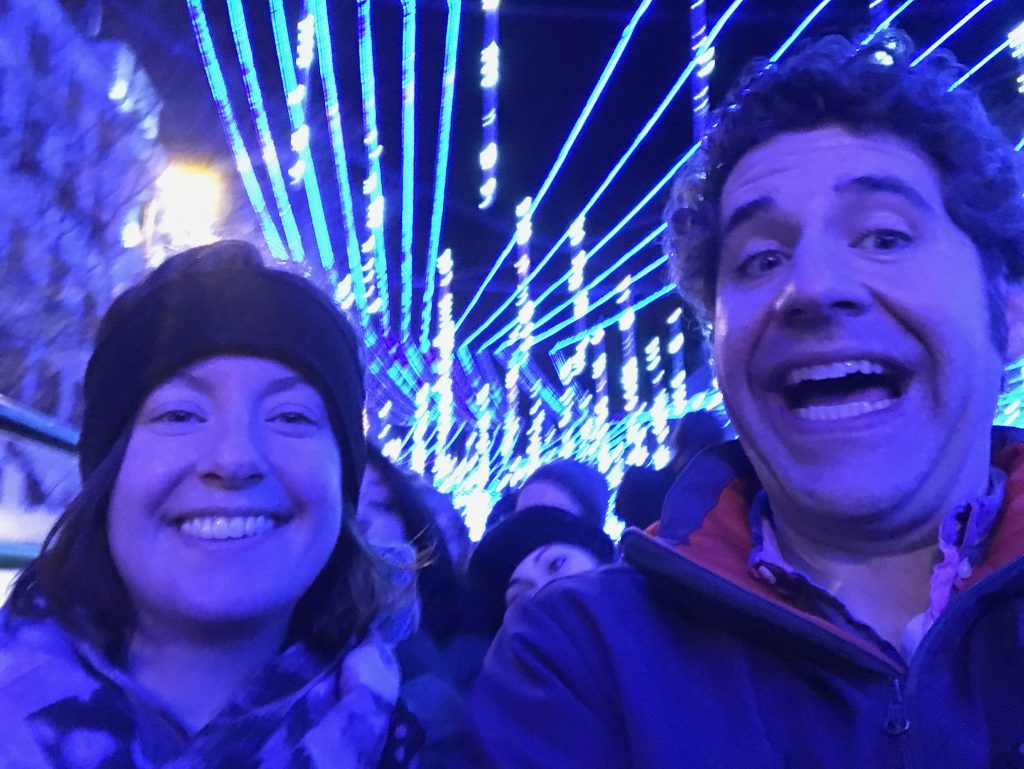 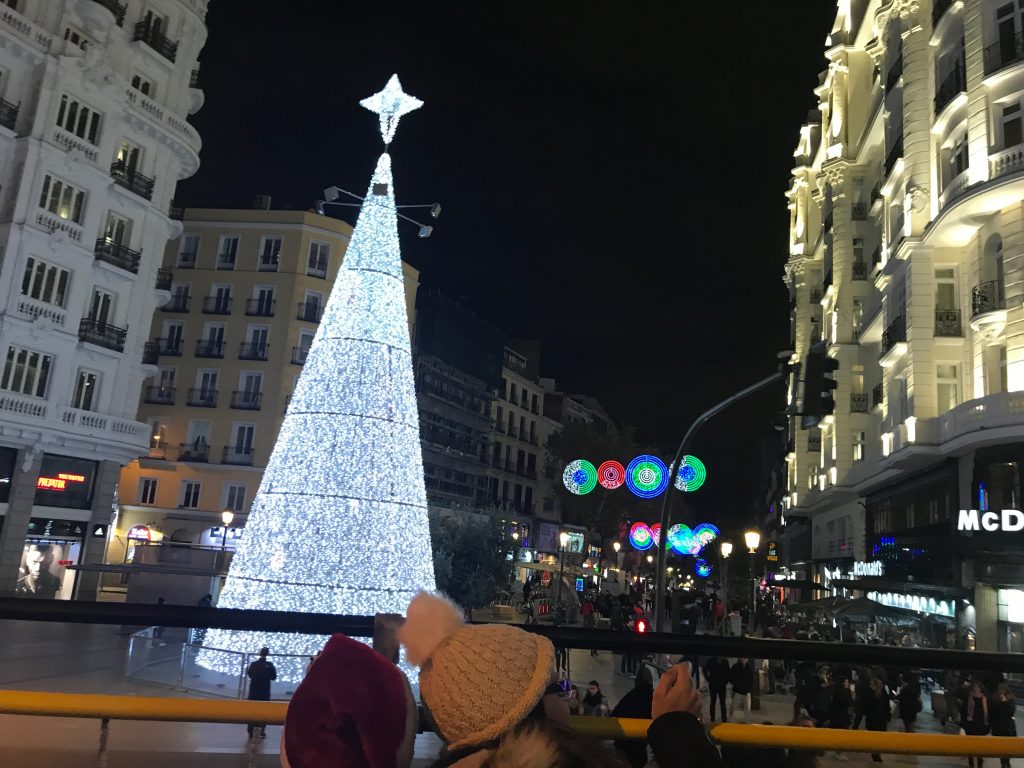 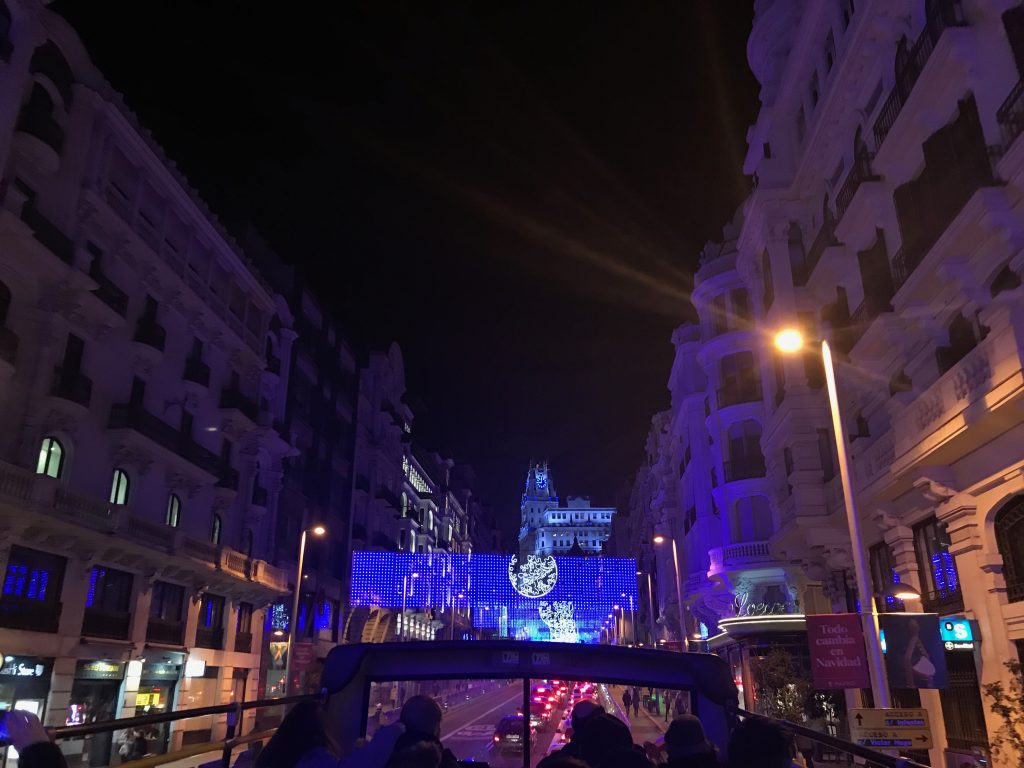 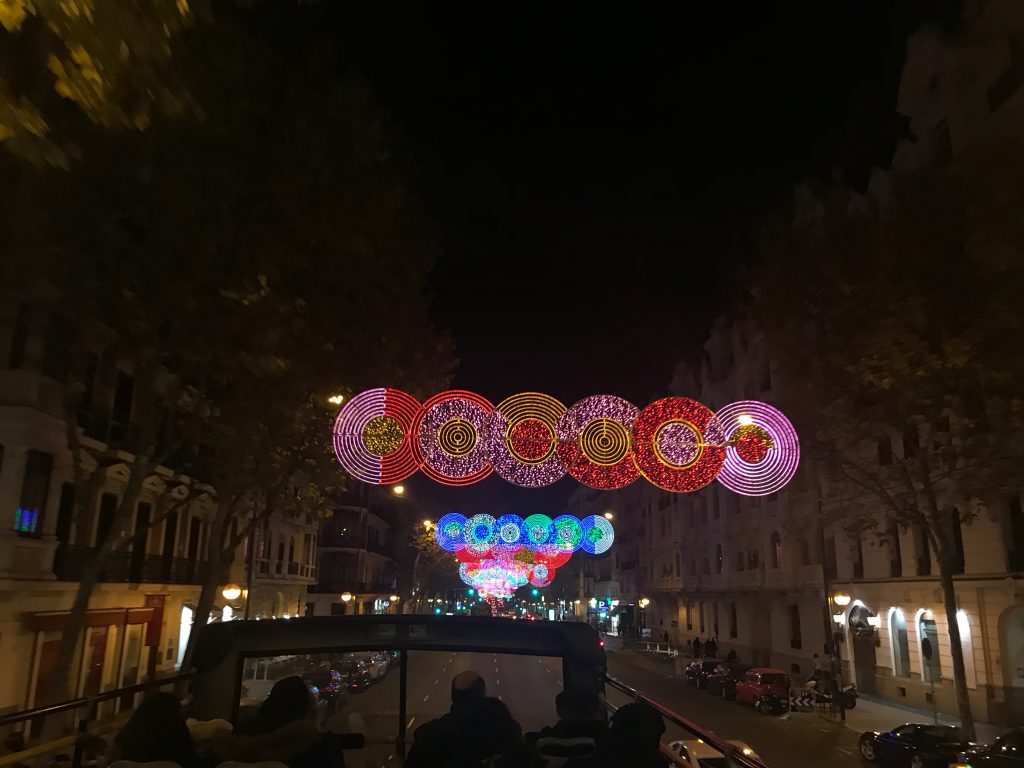 Also a holiday tradition in the center of Madrid: Cortylandia, an animatronic show put on by El Corte Inglés, the main department store chain in Spain. They have been doing the same show since 1979, though the story changes a bit. We are told every Spanish child (and many adults our age!) knows the refrain in this song. The show is temporarily setup over the entrance of the Preciados location, which again is just minutes from our place. Every evening before one of the multiple showtimes, the street in front becomes blocked with spectators wanting to see the 15-minute spectacular. 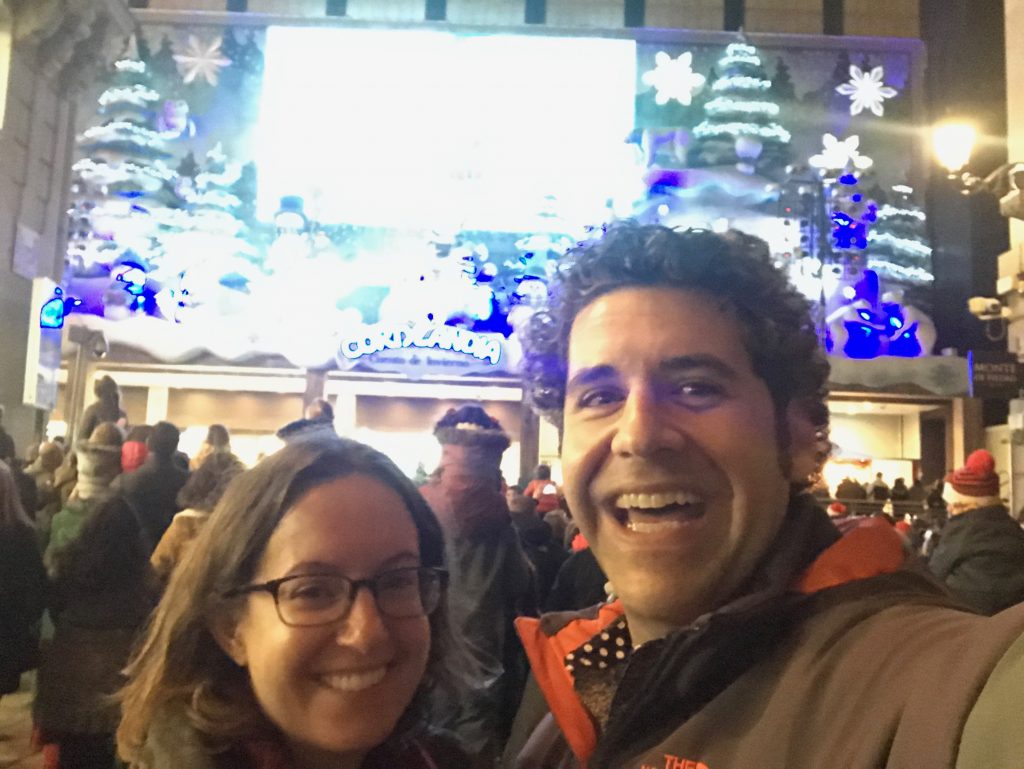 No surprise, the kids really got into it.

We really wanted to give you the full Cortylandia experience, but if you’re bored, skip to the last 10 seconds of this video where we get to the real purpose behind Cortylandia: toys, 7th floor.

One tradition we still don’t understand – but nevertheless enjoy observing – is the country’s obsession with the Christmas lottery. Doer watched students of San Ildefonso school drawing the numbers on TV, while Dreamer marveled at the excitement of her colleagues, who displayed the results in the staff room.

Lest you are thinking of USA Powerball, let’s briefly examine the economics of the Spanish Christmas Lottery: the good news is that you have over a 1 in 100,000 chance of winning. The bad news is that a ticket costs 20€ AND you have to share your prize with anyone else who has the same number. This past year (2017), ten people split the grand prize of 4,000,000€, meaning 400,000€ apiece, or about 320,000€ after taxes. Not exactly pocket change, but nor is there a lot of earnings potential there.

We began Christmas Eve day with a holiday symphony concert at the same theater. 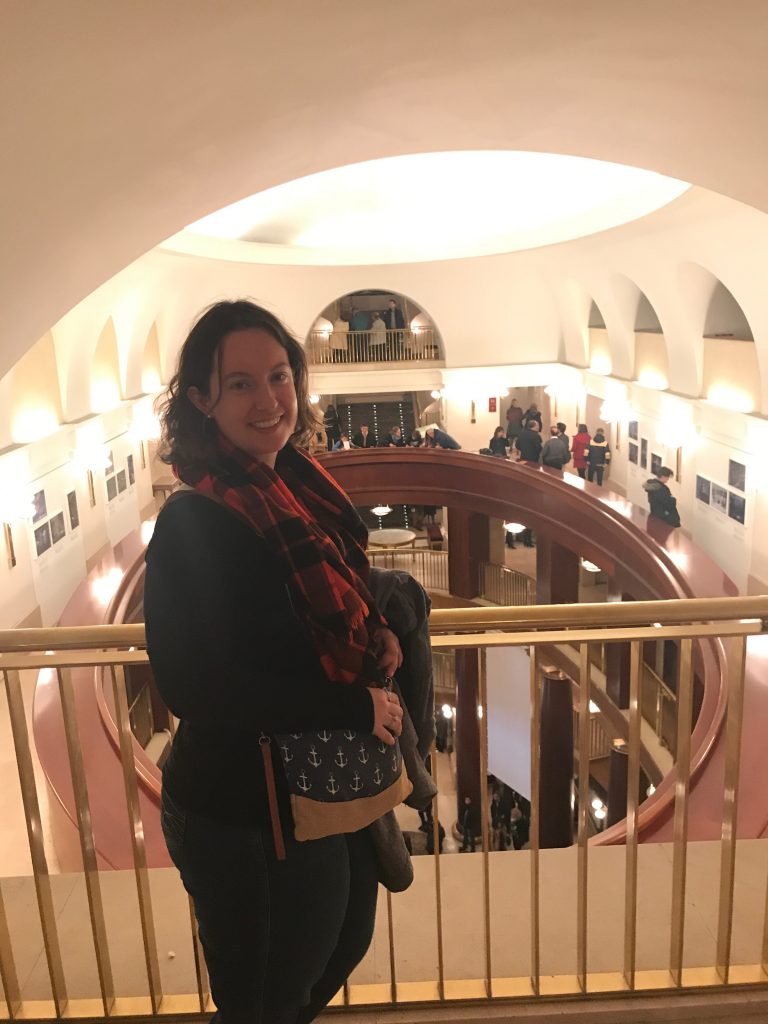 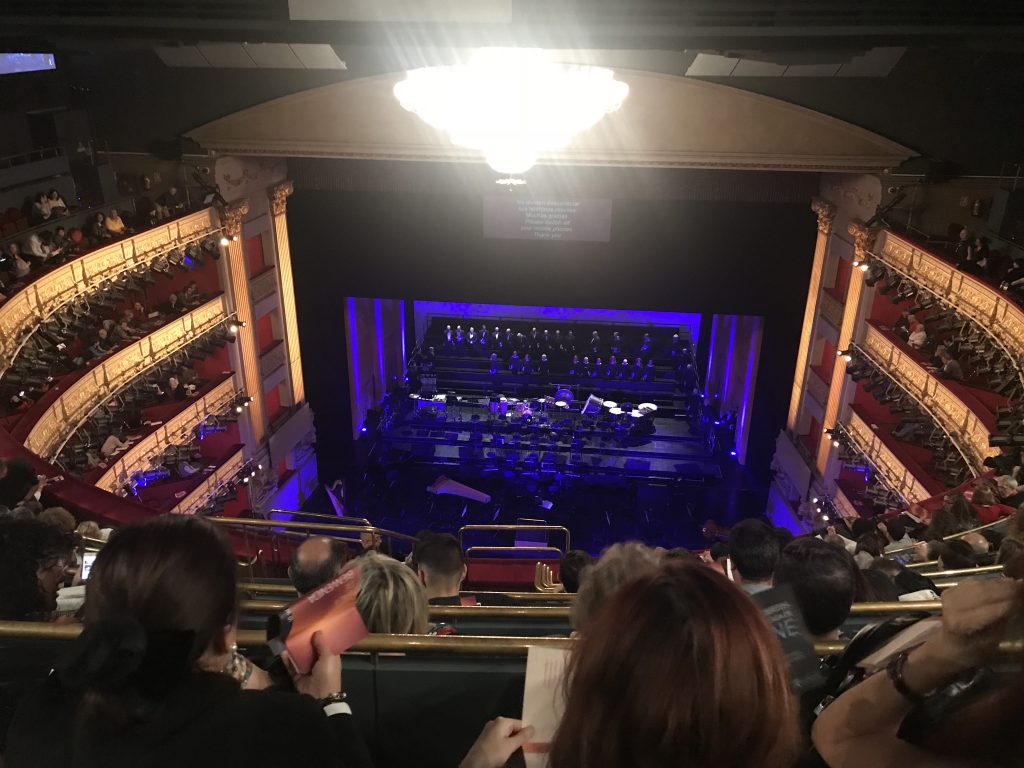 We were beyond excited and grateful to accept an invitation to Getafe, a suburb about 15 minutes by train outside the center of Madrid, to spend Christmas with our Spanish family.

The company wasn’t bad, either. 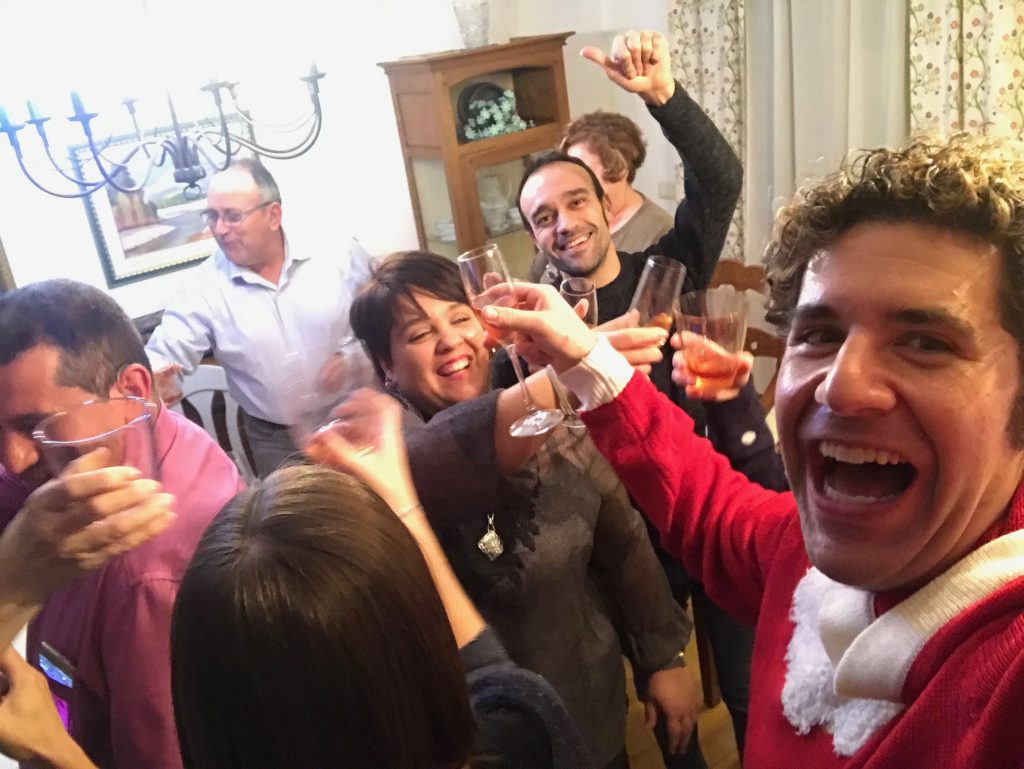 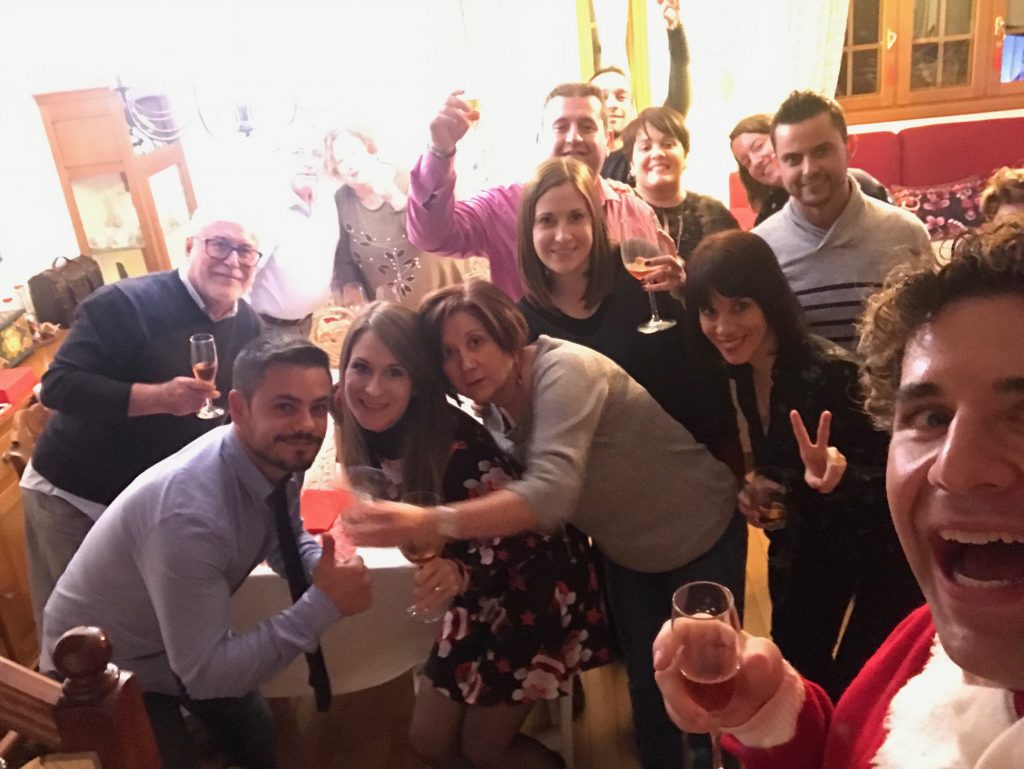 You’ll notice in the photo below we’ve got some new stuff on the table and everyone’s wearing different outfits. This is the Christmas Day meal, just as delicious with roasted baby goat on offer. Mom Hortensia really outdid herself! 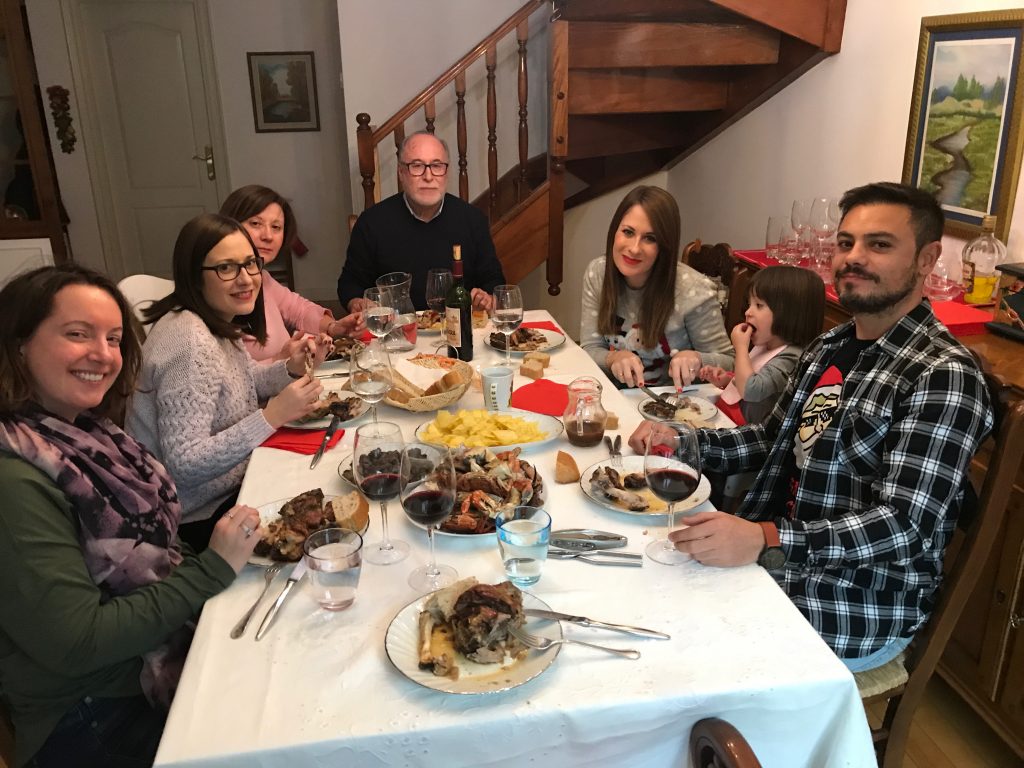 As we learned last year, the holiday season in Spain really doesn’t end until Three Kings’ Day in early January. This is when kids get presents, brought by the Kings. This year, we got to see Madrid’s big parade to welcome the kings.

There were lots of people throwing candy to the crowd of kids and adults alike. The firefighters really did their part.

As you can tell by Einstein above and the rocking scientists below, this year’s theme was science.

Then, the Kings arrived in their separate vehicles, and with their groups of helpers, who also threw candy.

We learned one thing about Christmas is universal: Mannheim Steamroller. 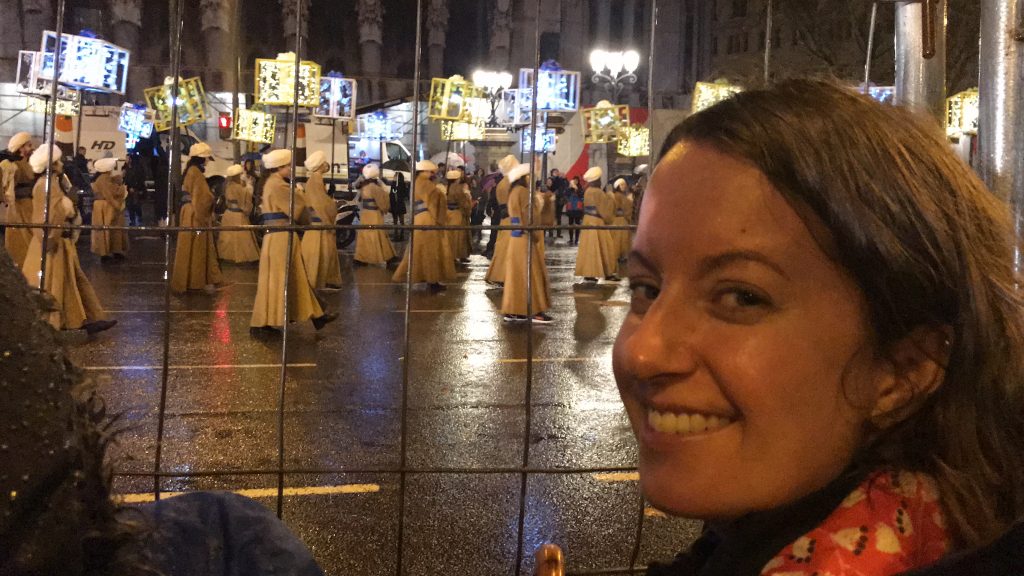 They even hired a proper actor to play the third king, if you get our drift. Nothing culturally inappropriate here in the big city. 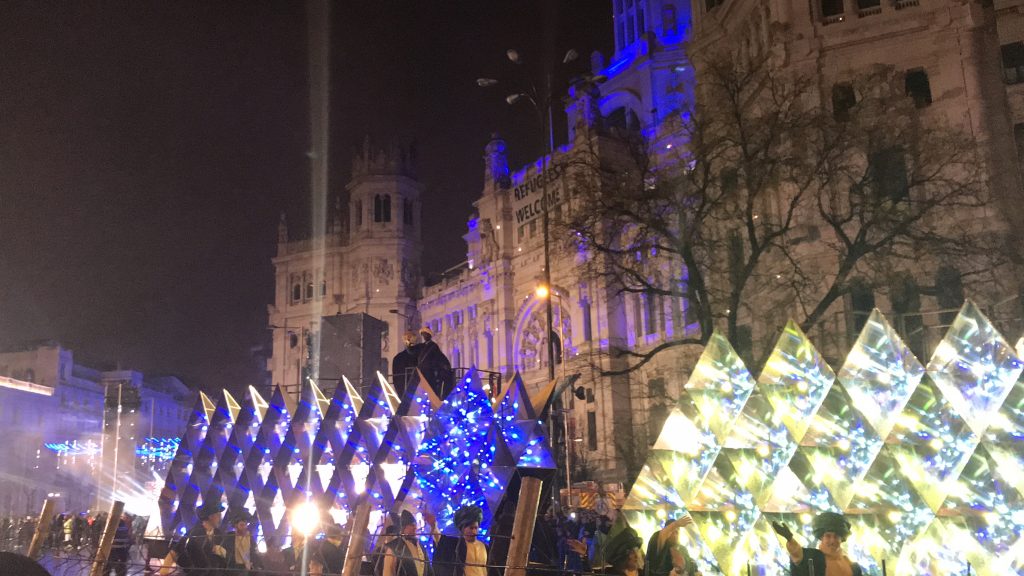 With all three kings safely landed in Madrid, the lady mayor gave a speech welcoming them and then introduced a star to guide them on their journey.

After the parade, we braved the crowd in our favorite pastry shop, La Mallorquina, to buy the traditional cake, Roscón de Reyes. 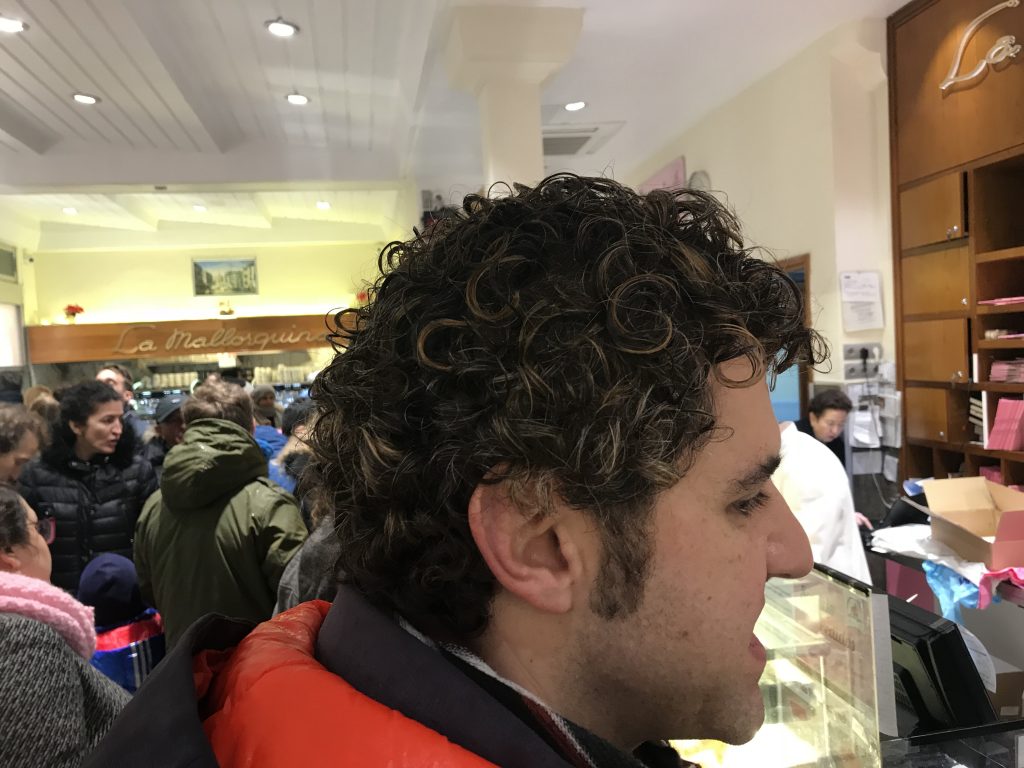 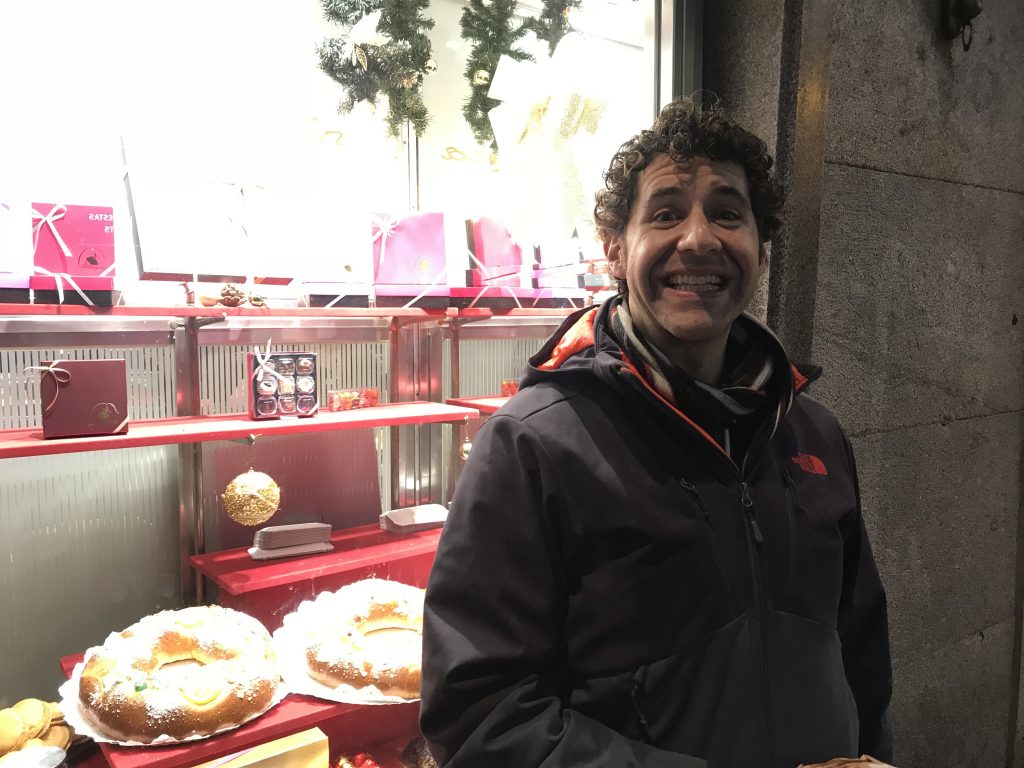 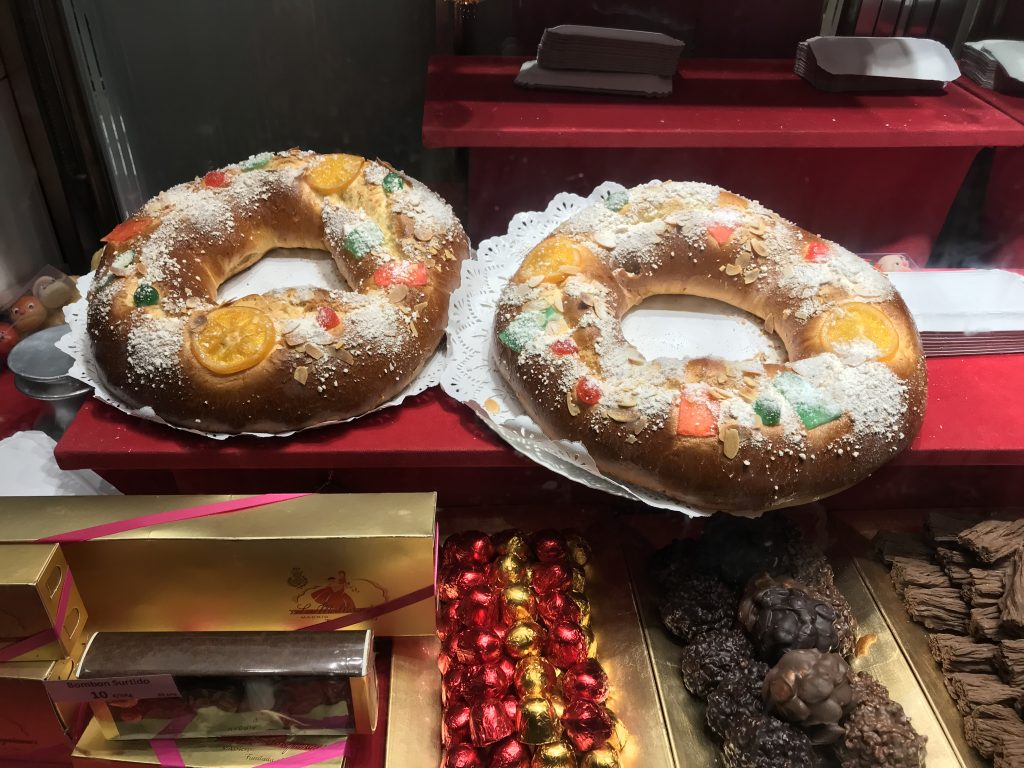 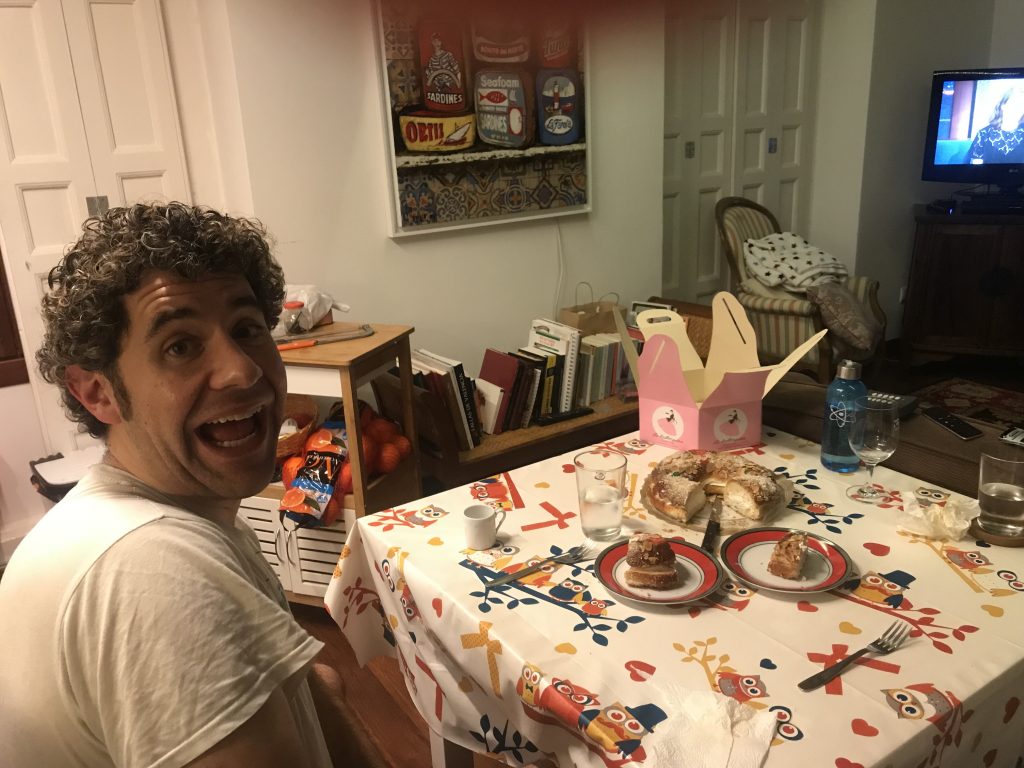 The Kings brought us a few gifts the next morning, too.

And lest you think we got caught up in all this Christmas hullabaloo, we will remind you we made potato latkes to celebrate Hanukkah, too! 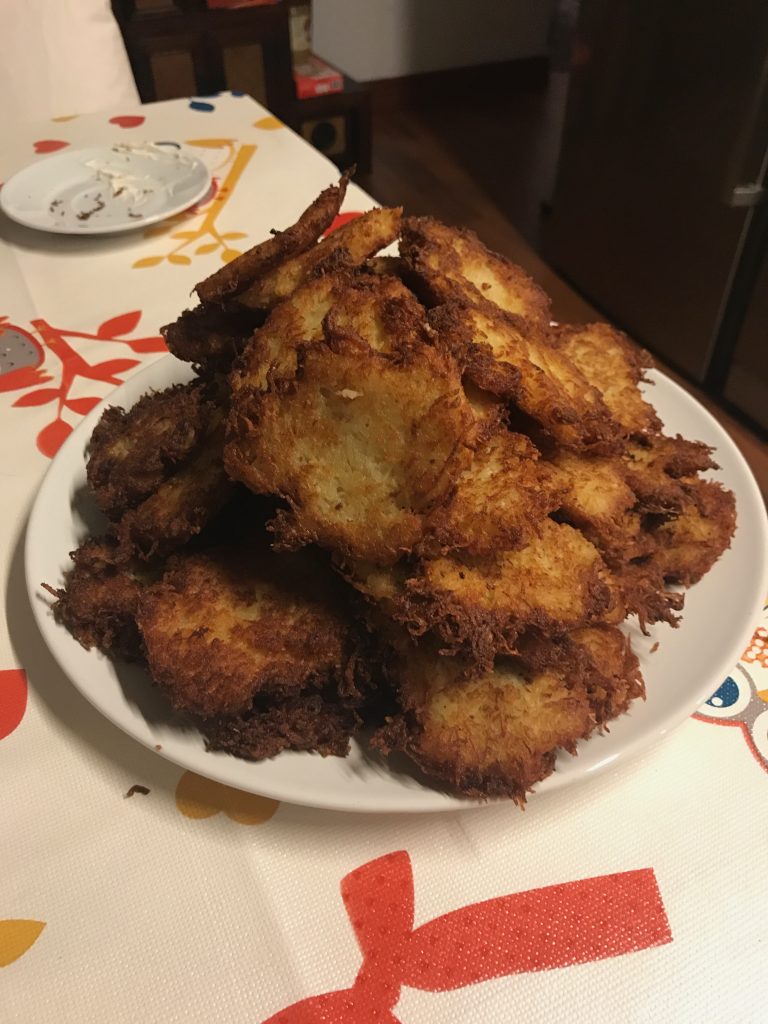 And don’t worry: we haven’t forgotten about New Year’s. That’s coming up next.