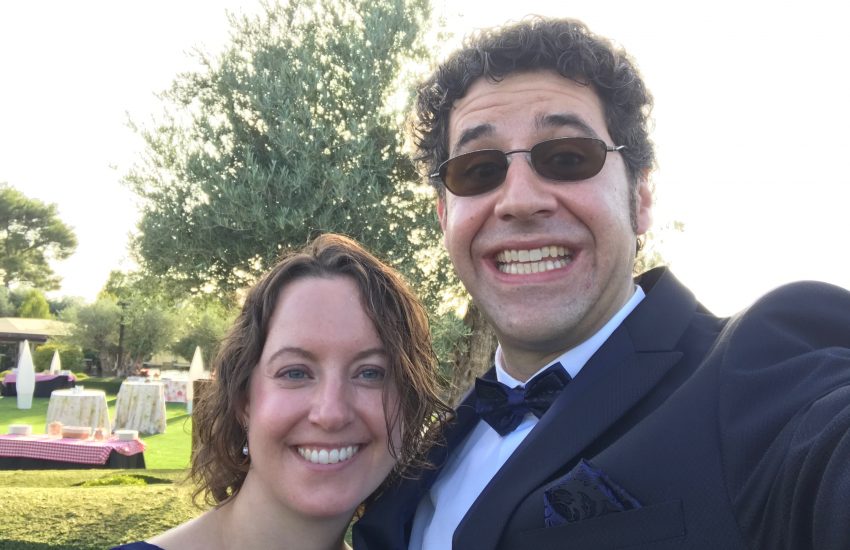 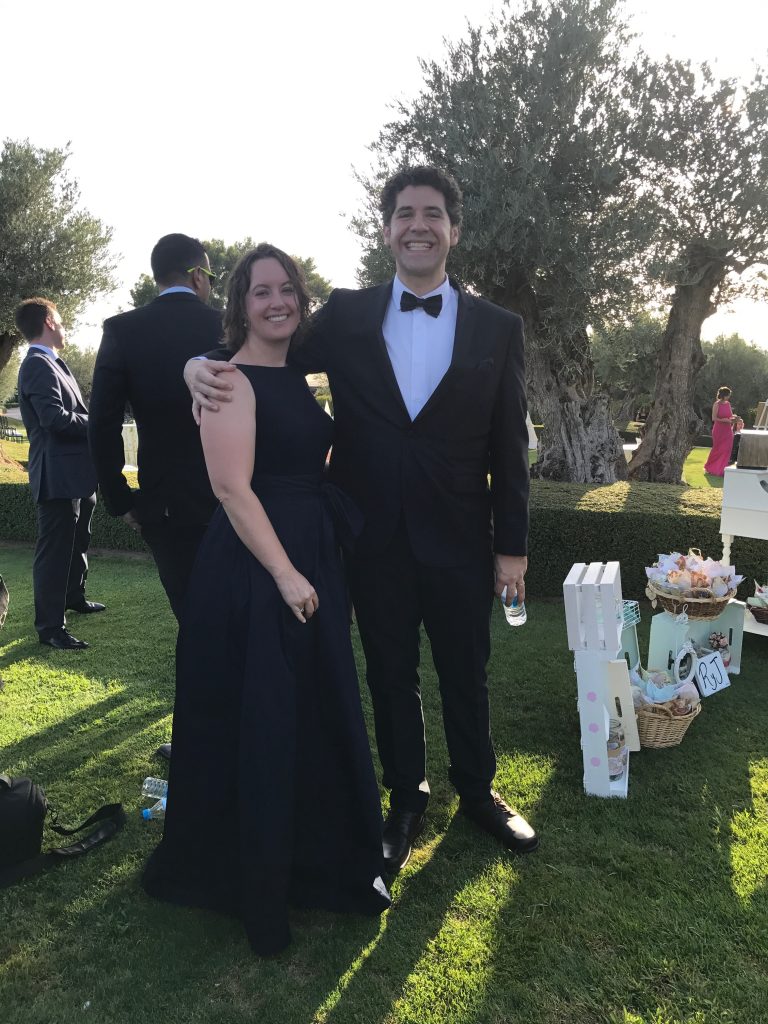 One of the best parts of living in Spain is getting to know Spanish people, and last July – shortly after our move – our Madrid family invited us to the wedding of Doer’s host sister, Ruth, and her marido-to-be, Julian (Juli). Host sister, you say? Well, Doer first met Ruth and her family in the year 2000 on his first trip to Spain, a high school Spanish class trip where they hosted this young American boy. And they have stayed in touch ever since.

So we hopped on a train to the Aranjuez, a city in the southern part of the Madrid Community that’s famous for its royal palace, and for being the city for Madrileños to get married… probably because it’s just so darned romantic. 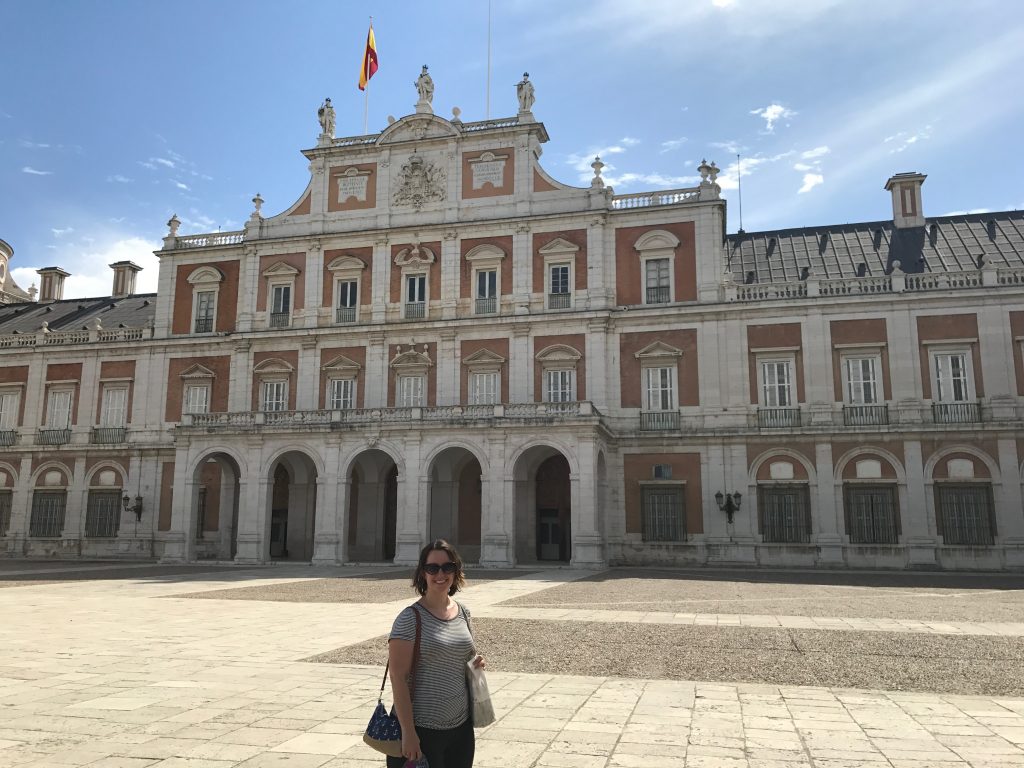 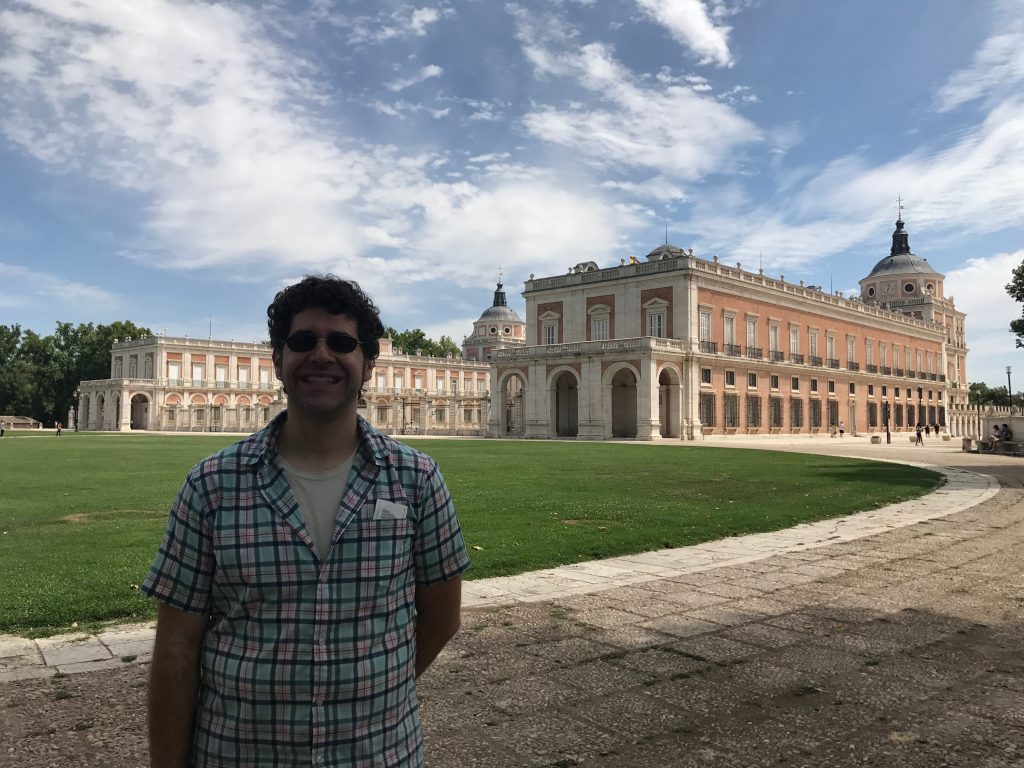 Sadly, photography wasn’t permitted inside the palace. Needless to say, it was quite opulent – Dreamer especially liked the porcelain room. 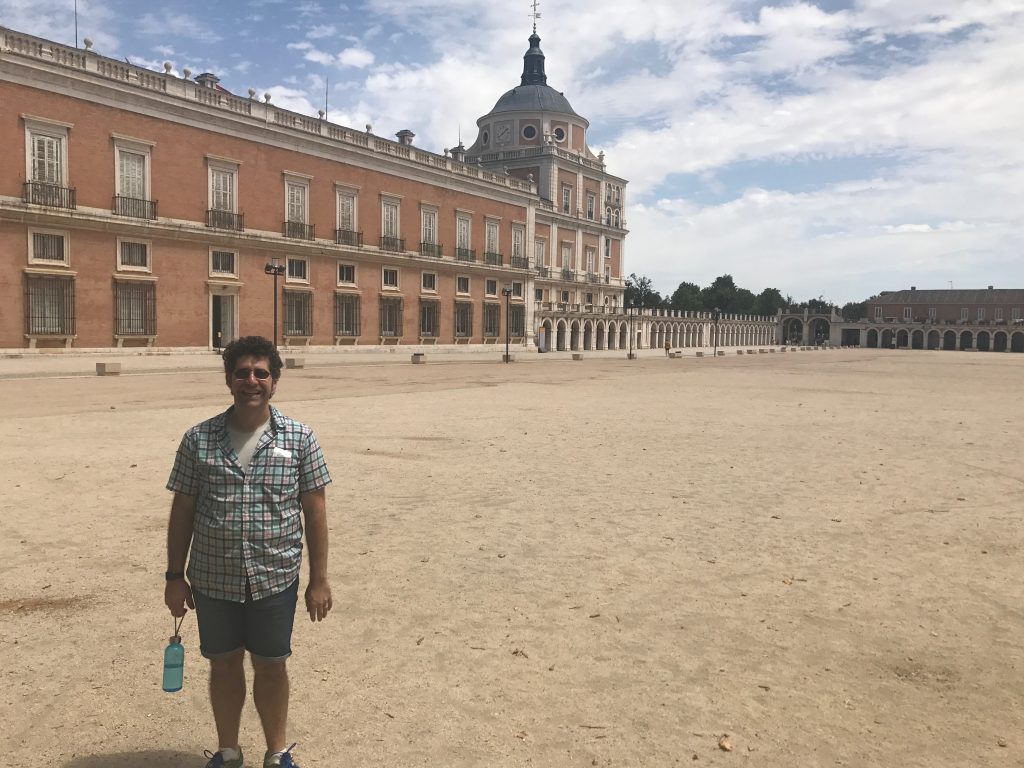 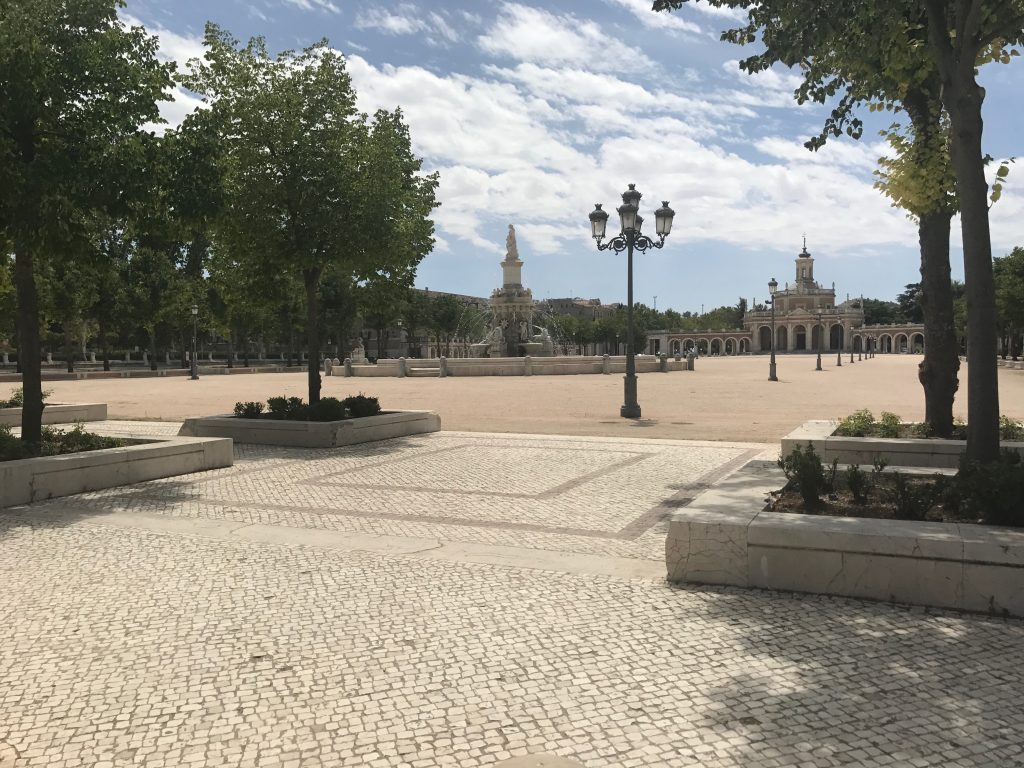 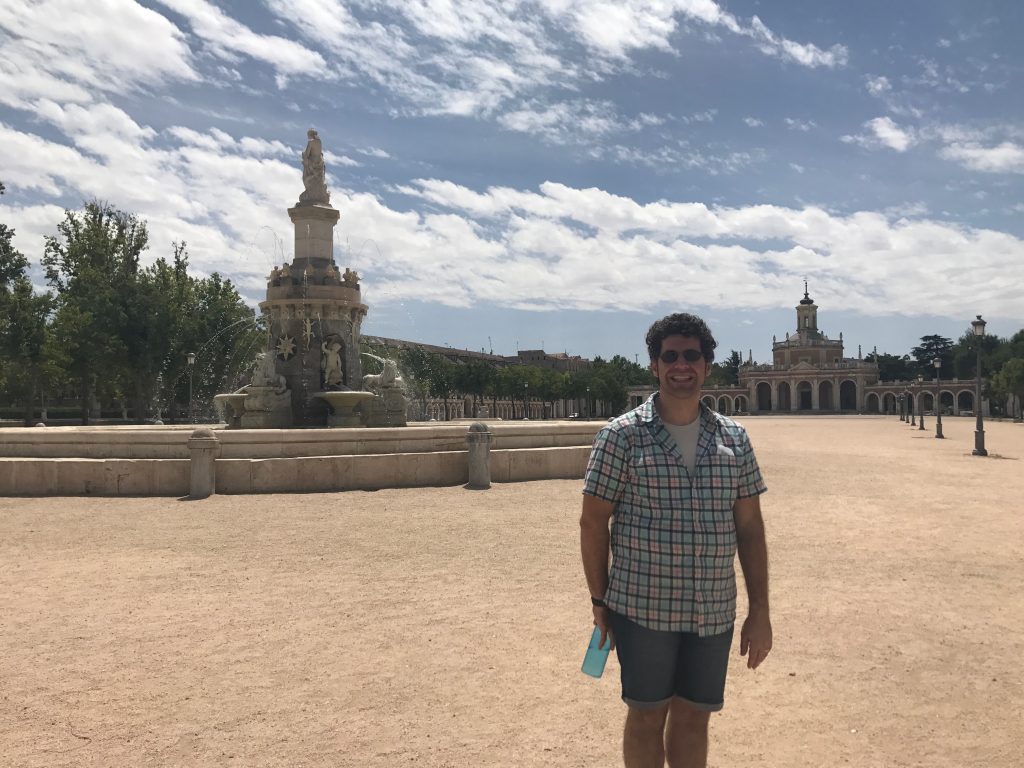 Apparently, only royals and nobles were allowed to live in Aranjuez until 1752. Construction on the palace began in the 16th Century, when the Spanish capital moved from Toledo to Madrid. It became one of the four seasonal seats of government, with the monarchs residing there in the spring. As we walked around, there was just one problem that quickly became evident.

Undoubtedly, the kings and queens enjoyed the extensive gardens surrounding the palace. But it was just so darned hot this time of year, so we visited the gardens in the comfort of a mini tourist train. 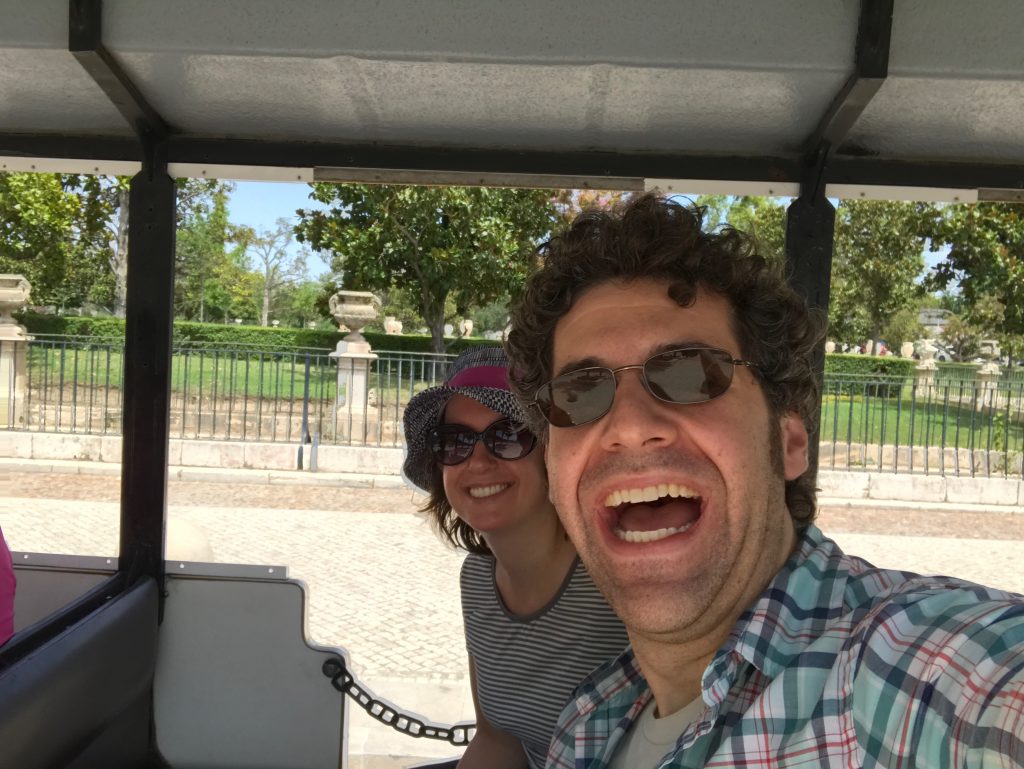 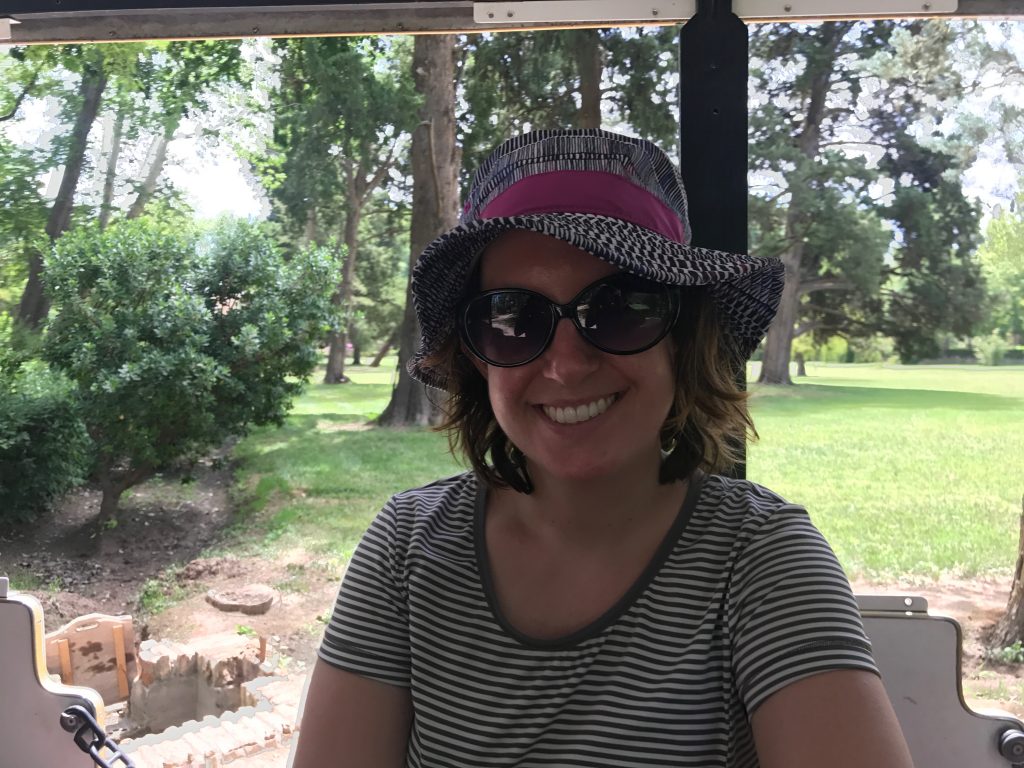 The palace and gardens were beautiful, but we had a wedding to get to! We went back to our hotel and grabbed a quick bite to eat before the ceremony. Doer had even heard tell of a local specialty.

Obviously, Dreamer was having none of this and ordered some patatas bravas for herself.

Off to change into our formalwear and get to that wedding… We had fun shopping for this one. 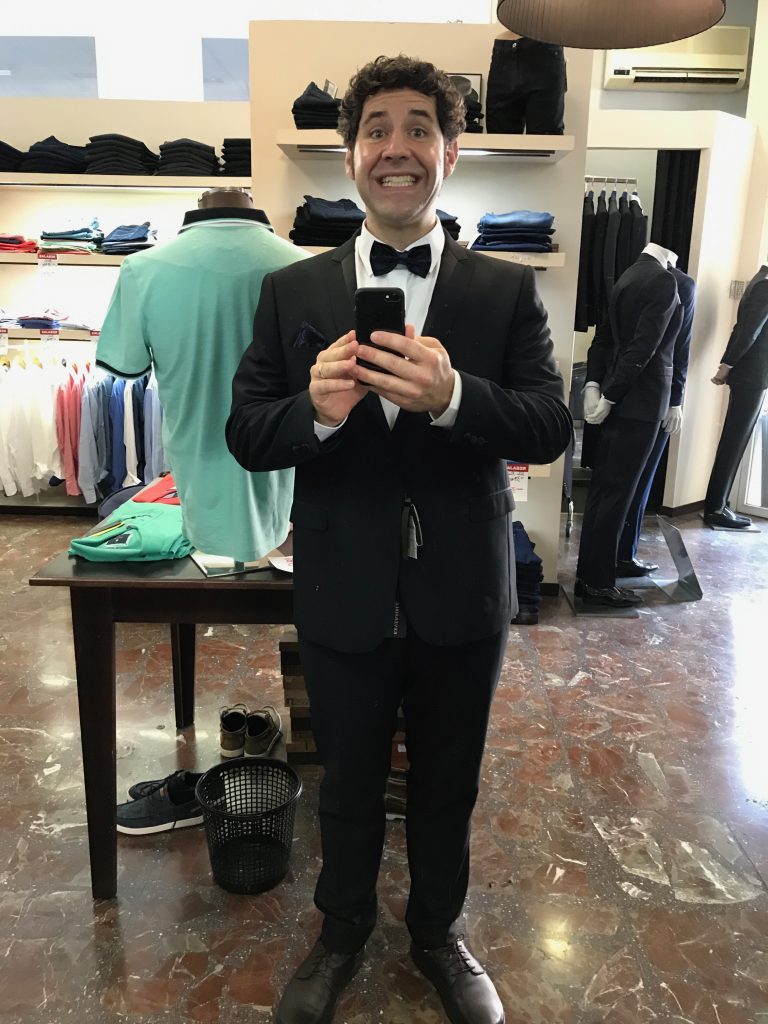 We really looked forward to seeing the similarities to and differences from American weddings. This one was held at a beautiful farm outside the city.

There was rice thrown after the ceremony, of course.

And then, the endless parade of tapas began. Doer was very impressed with one difference from Americna weddings: some fine Spanish ham, freshly cut before our eyes. Two legs of Cinco Jotas – the very best, if you’re into that sort of thing. We got whole plates to carry around and share… maybe, if it didn’t disappear first. Doer went back for more than a few plates and took notes on the fine carving technique of these professional jamoneros for later repetition at home. 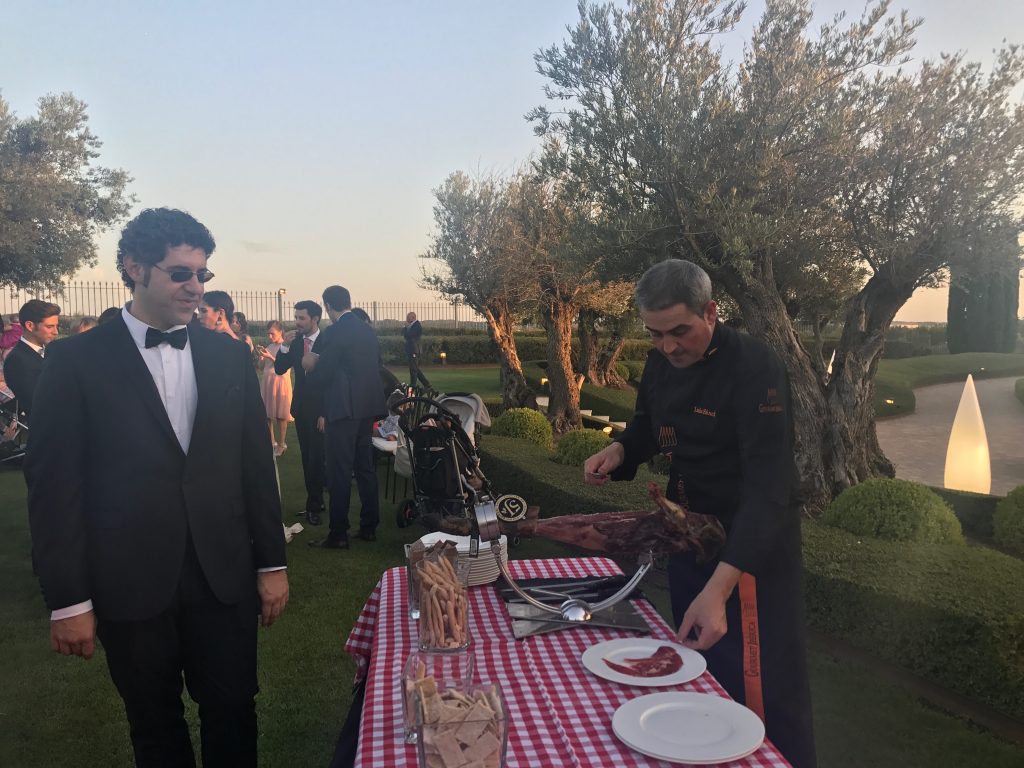 Unfortunately, we kind of forgot there was a meal served after all these tapas. Mistake! Everything was so delicious and there just wasn’t room for it all.

And after all this, there was dancing, more drinking, and even smoking (cigars and cigarettes provided by our hosts).

Maybe at this point we should note that the wedding ceremony started around 8 p.m., tapas at 9 p.m., and dinner was served around 10:30 p.m. At midnight, we were hearing speeches and having dessert, then finally the dancing began at 1 a.m. One big difference was that many of the Spanish guests and even their children stayed up until nearly 6 a.m., when the venue staff politely attempted to usher them out. We partied the night away with them, but we sure regretted it for a few days thereafter. How do Spanish people do this so often, we wonder? 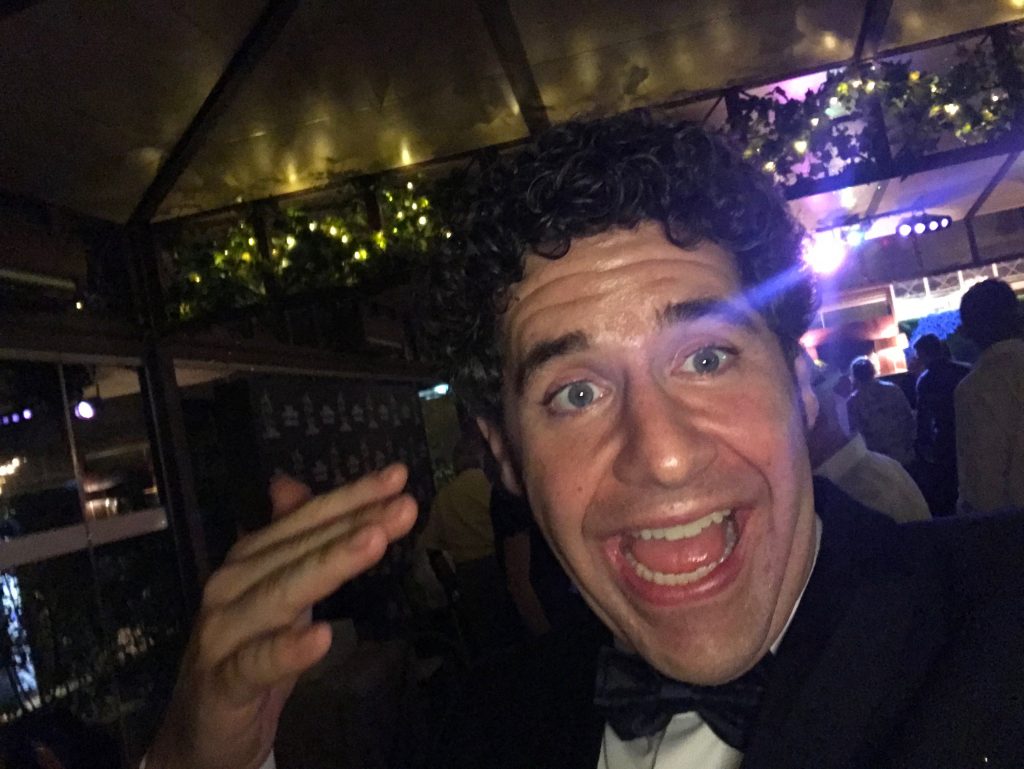 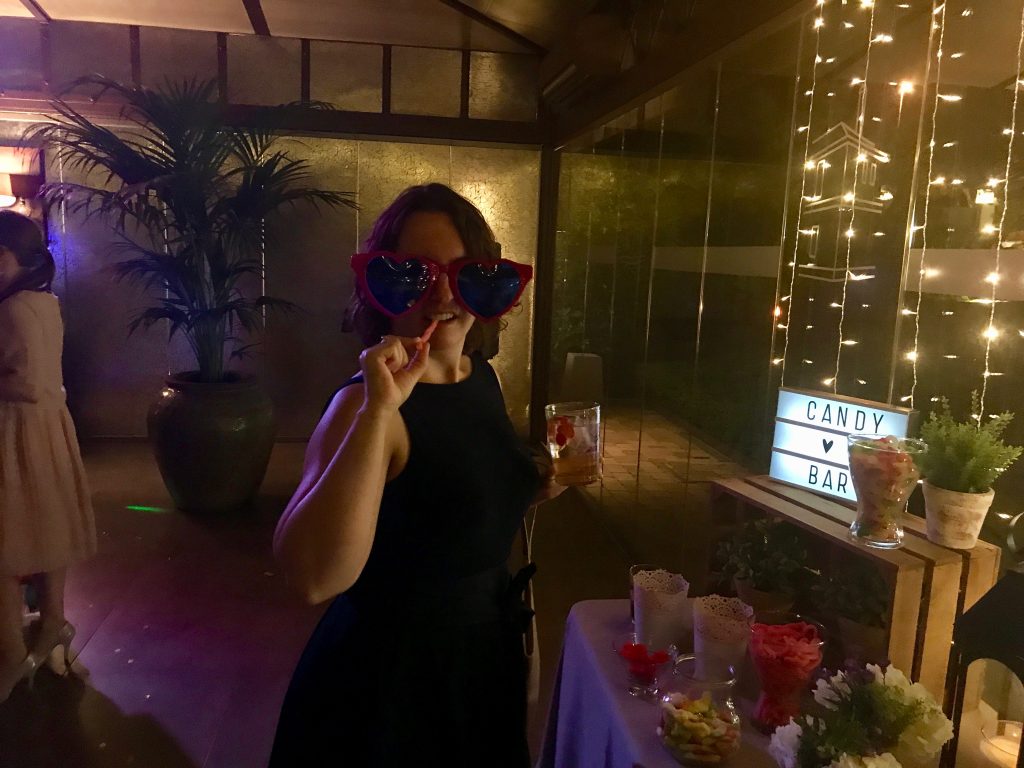 We had an amazing time and want to thank Ruth, Juli, and our familia Española here for inviting us to be a part of this special day. Congratulations again, even though we are nearly a year late in writing about it! Unexpectedly, Doer got to meet many of the same friends and extended family he had gotten to know years ago. Cousins, aunts and uncles, friends now married with kids… they were all there! It was great catching up with everyone and making even more friends here in Madrid.