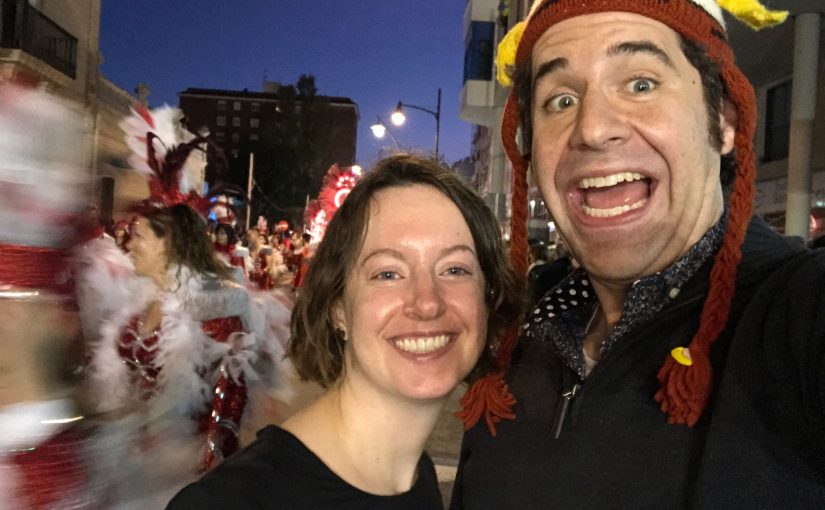 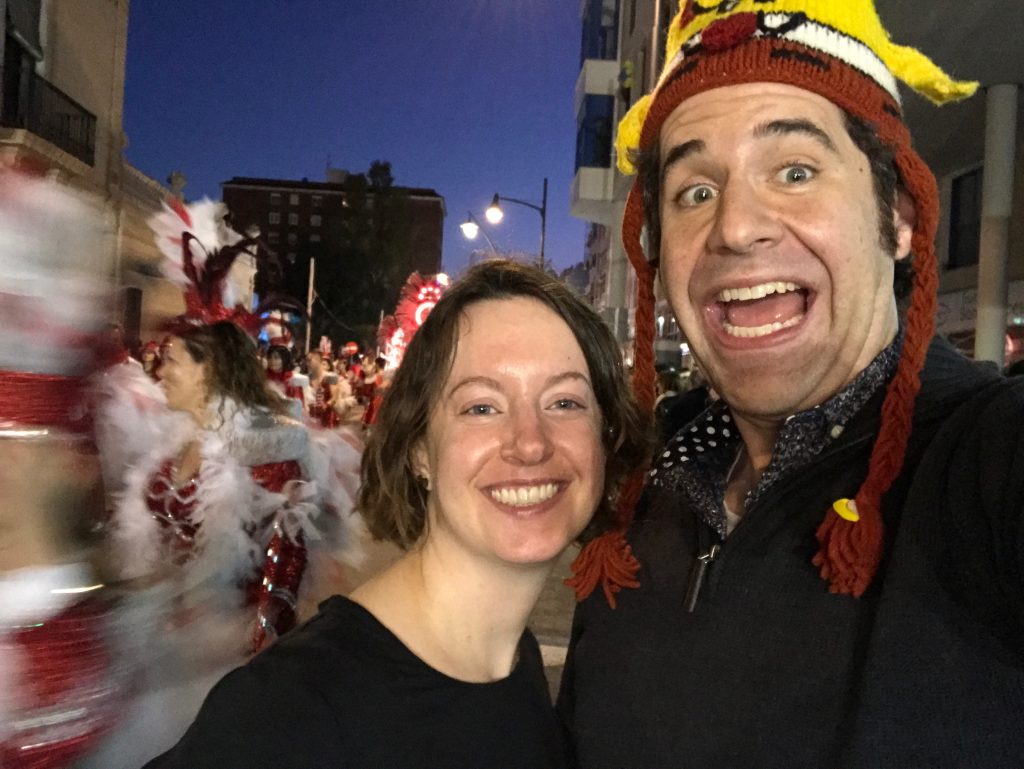 Sometimes, that one weekend hits where you know you need to remain home because fun stuff is going on all around you. The last weekend of February was like this for us.

About an hour north of us in our province, Vinaròs is famed for having the best Brazilian-style Carnaval around. Since Lent was coming, we thought we should check it out.

We arrived with a little bit of time before the parade and decided to check out the town.

Needless to say, we did not leave disappointed. Once the parade began, it was a nonstop party. 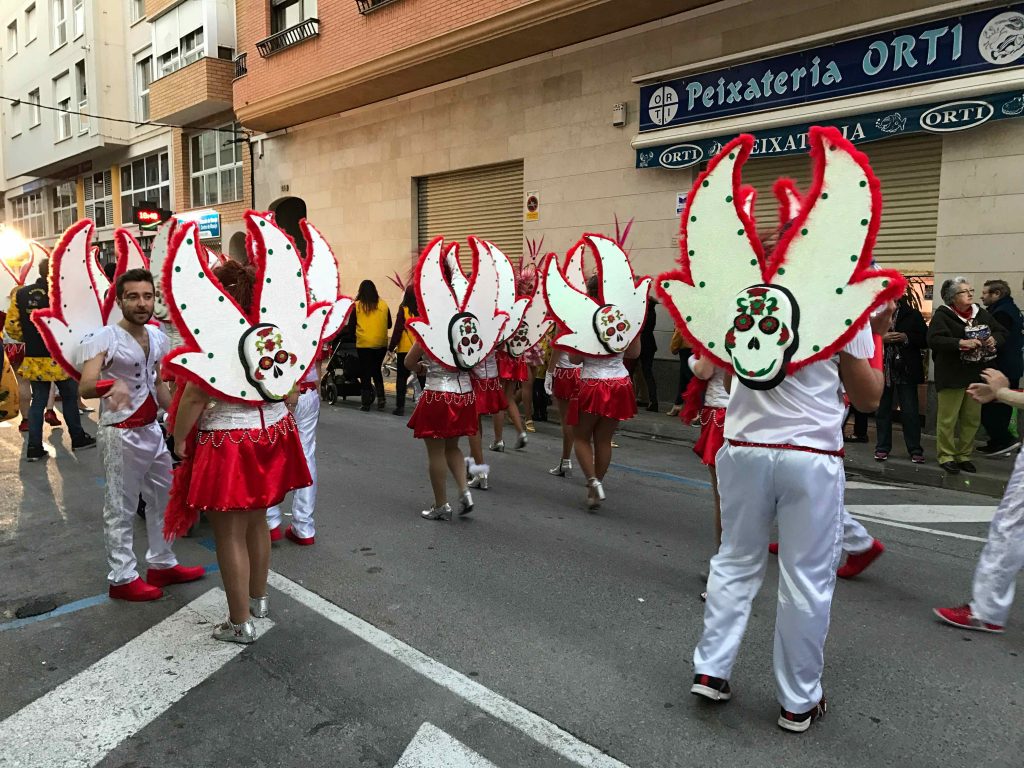 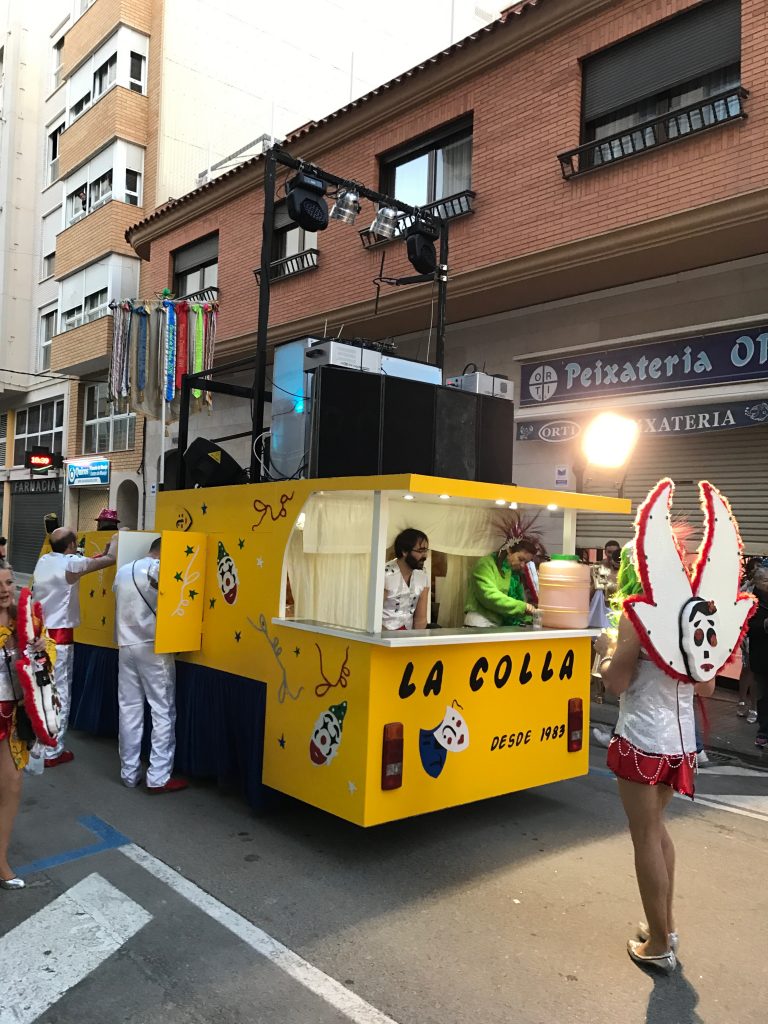 We quickly found each comparsa – a social club of sorts – parading around its own vehicle with a special purpose. Can you spot it?

A bar on wheels is bound to make any parade a good time. But the quantity of people in each club that needed to be supplied with alcohol! And those costumes! Children, men, women, men dressed as women . . . . 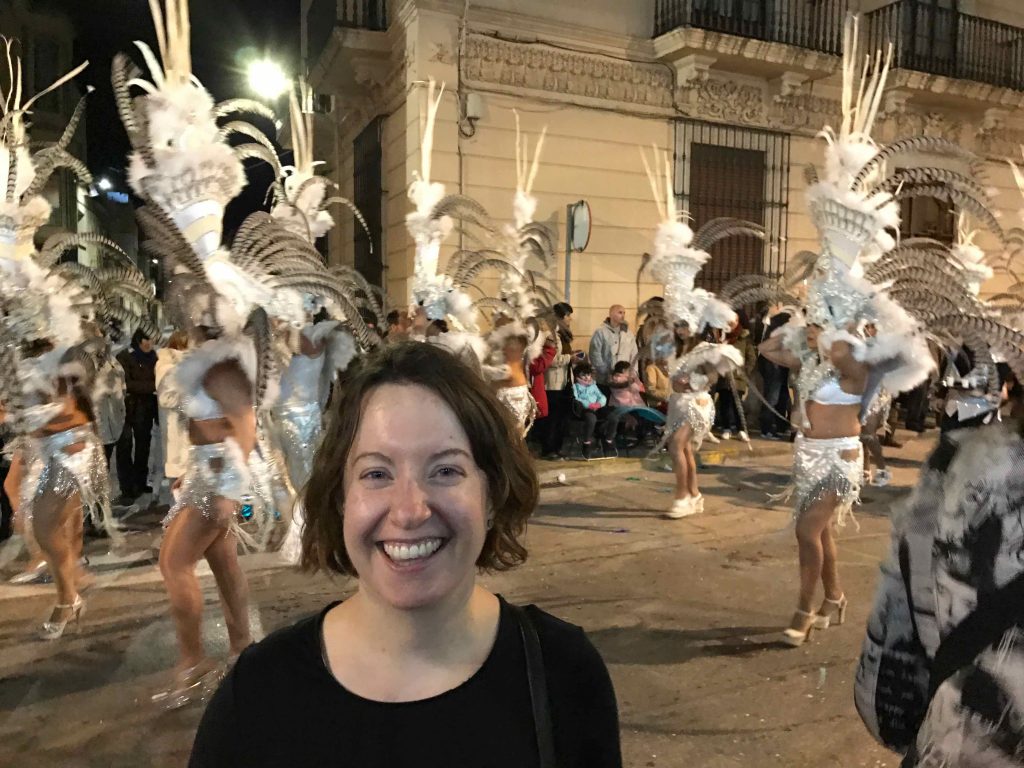 Some parade floats combined the adults and kids. 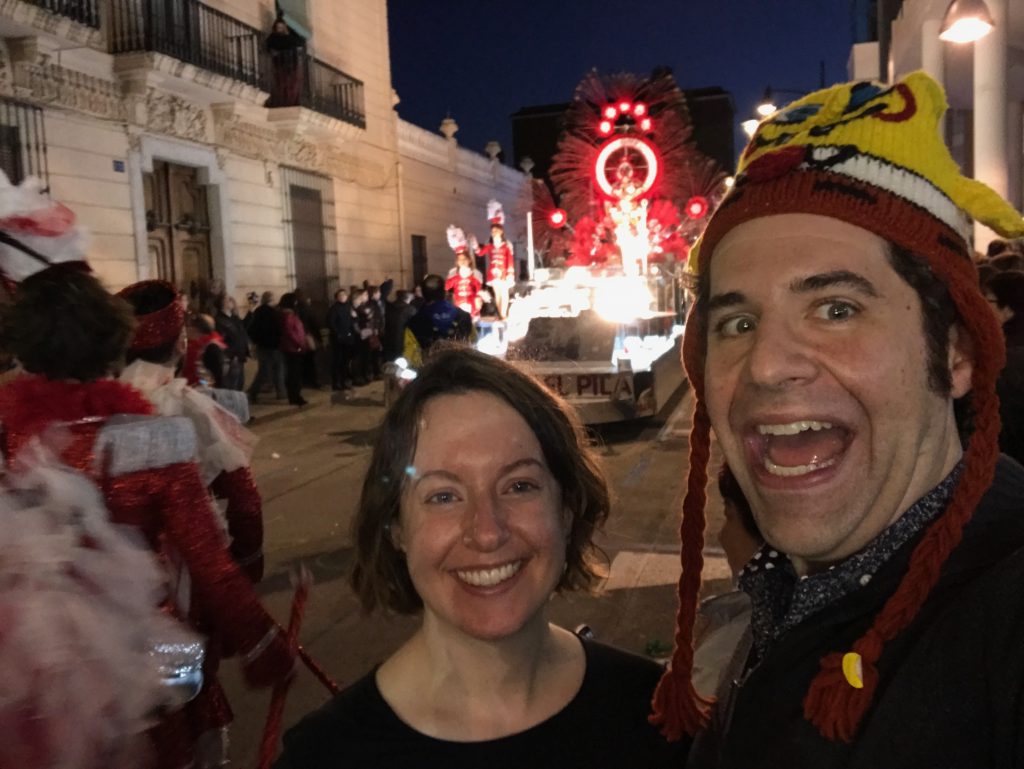 Supposedly, the theme was “Bollywood,” but we can’t say we saw any group with a thematically-appropriate entry.

Some of the floats were just beyond elaborate, always requiring the use of an electrical generator or three towed behind the vehicle.

Doer took pity on the poor tractor drivers pulling many of the floats. Work that clutching foot!

Meanwhile, Dreamer was awed by the feats of strength and endurance of some of the participants.

But the hardest part may be smiling the whole time.

Finding and maintaining a good rhythm is essential.

Really, everyone was encouraged to celebrate – even those of us who were just watching. 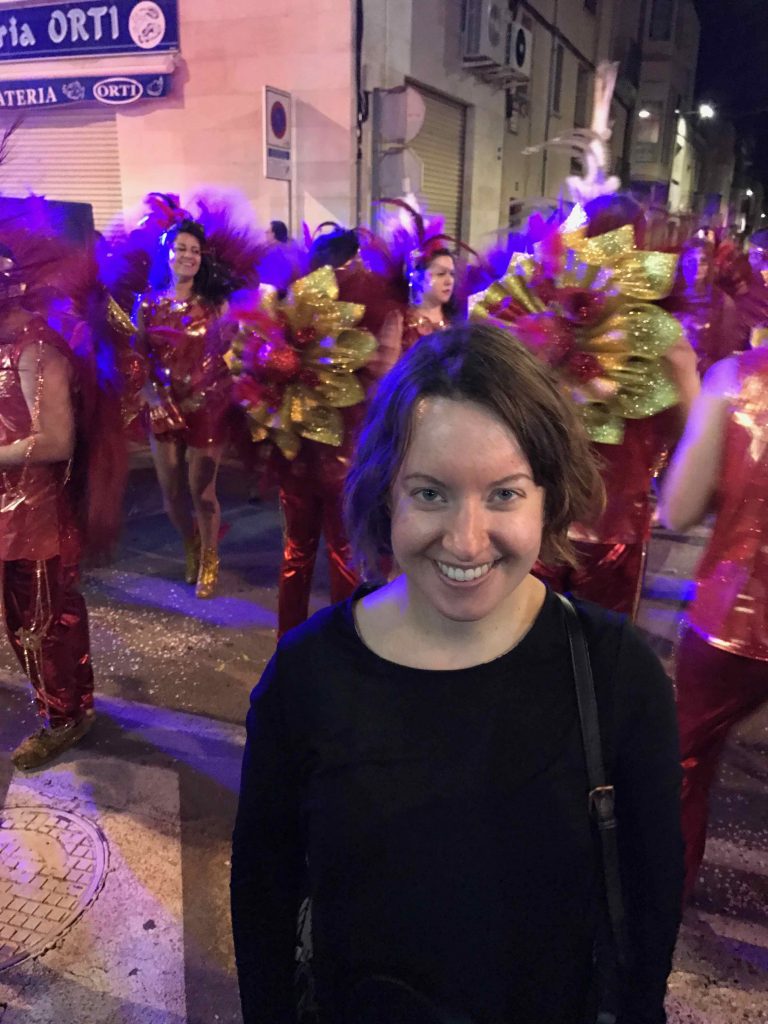 We left Carnaval early – not only because it got a little repetitive, but because the next morning, Doer had plans to fulfill a culinary dream. Black truffles are common in the mountains of our province, and it was time for the annual truffle festival.

There were cooking demonstrations… 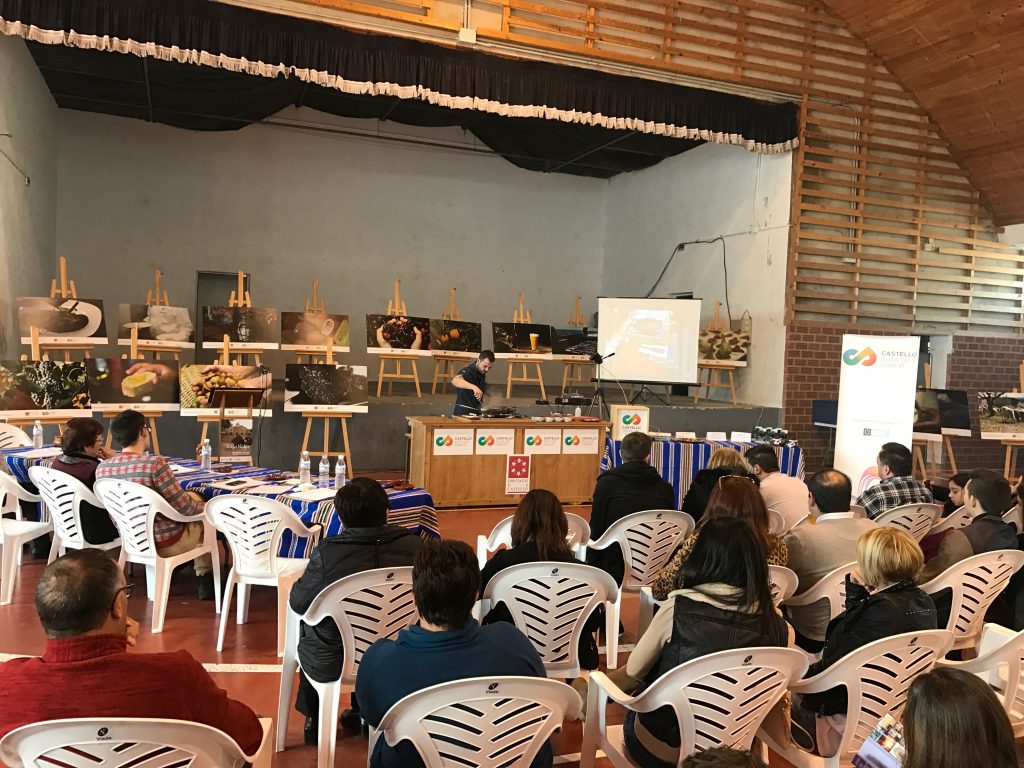 …a giant truffle-infused paella for lunch… 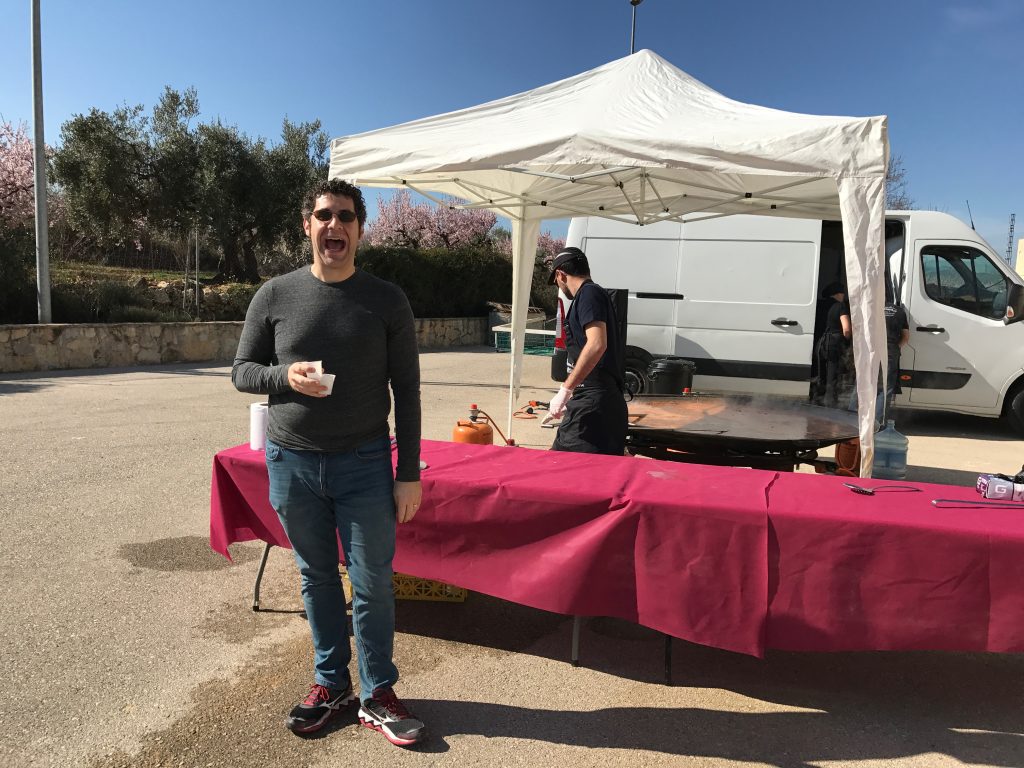 …and Truffle. Hunting. Dogs. This was the thing we dreamt of seeing more than anything else. See, truffles cannot be cultivated and must be dug up next to trees in the wild. Pigs once were used to sniff them out, but they would eat most of the truffles they found. Enter the dog with its keen nose and desire to please its master.

The first dog was easily the cutest, but didn’t find all five hidden truffles in five minutes.

This dog was the winner, and you can see why. Finished in under 3:30. 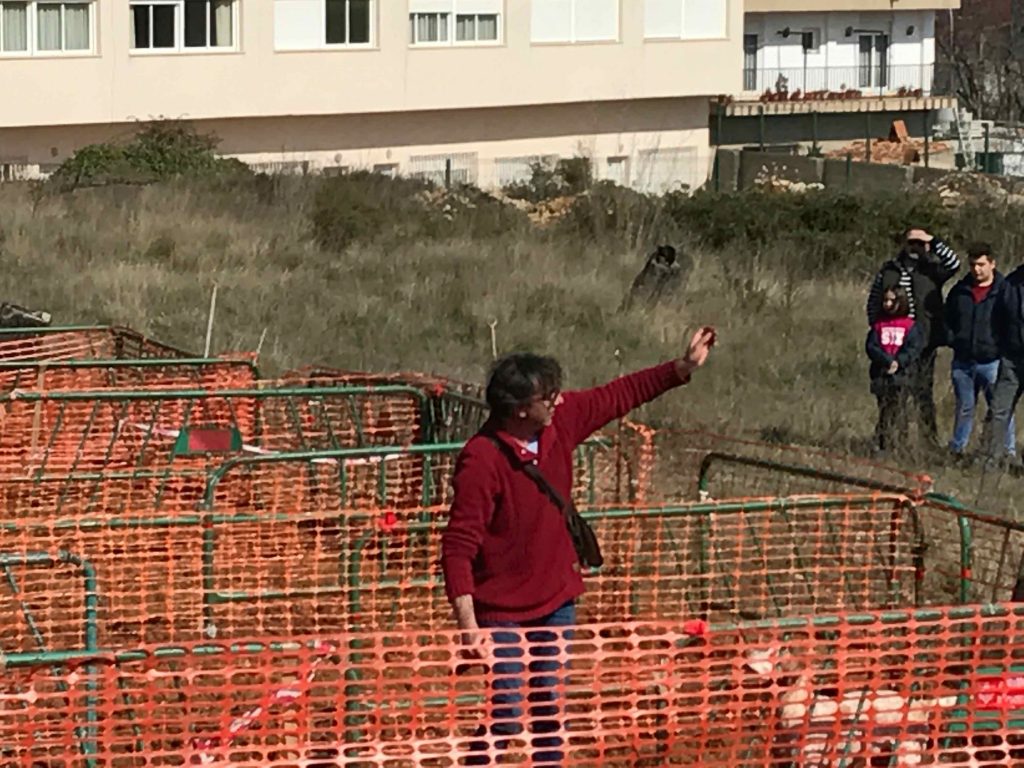 At the end, prizes were handed out for best dog, best cooking demonstration, etc. 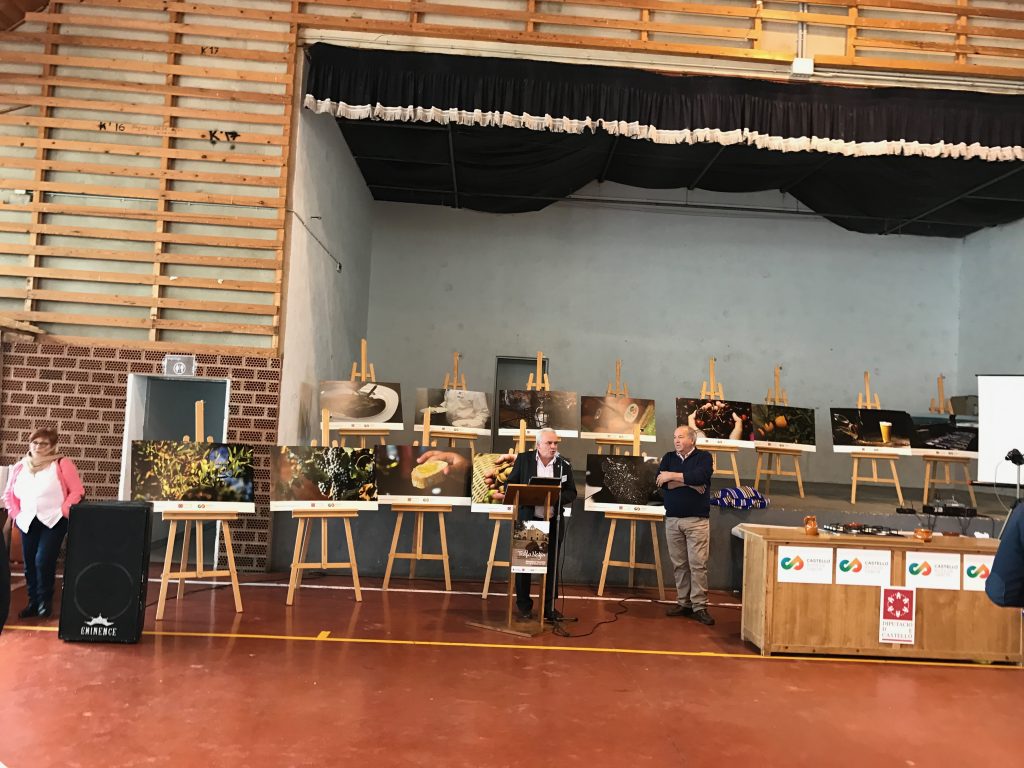 On our way home, we stopped to admire some flowering almond trees in the mountains. 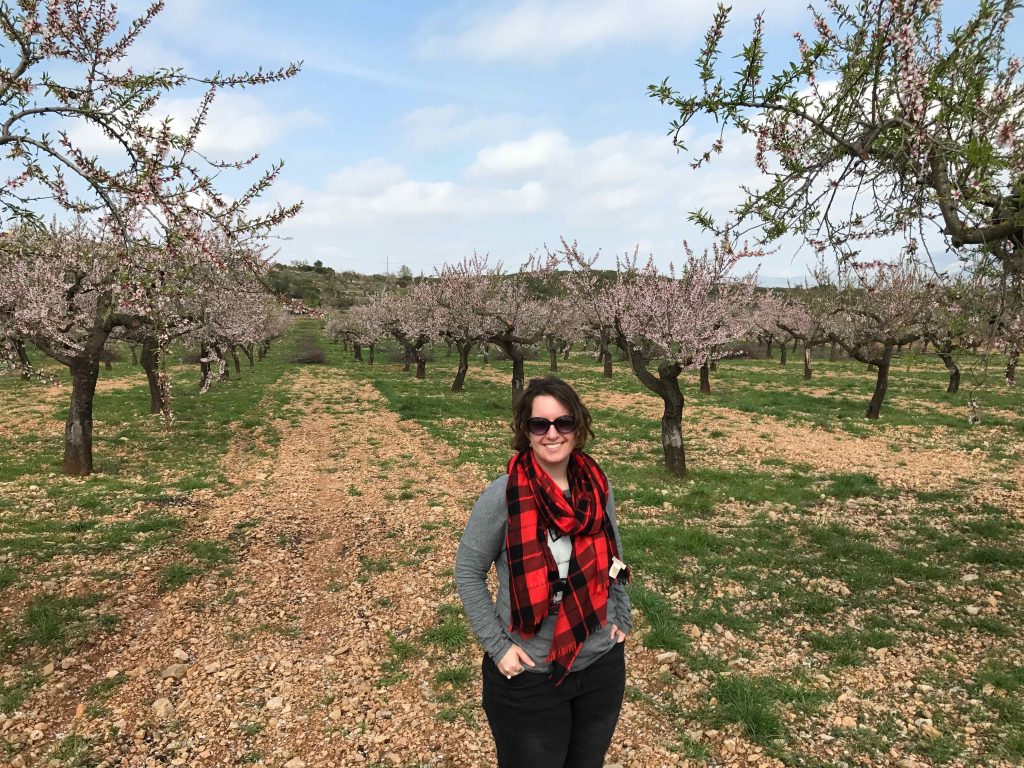 We’d been here long enough without actually making it to a soccer match so that, when some friends invited us, we had to say, “yes.” Their penya (a social group like the aforementioned comparsa), Celtic Submari (link in Valenciano!), in neighboring Vila-real, hosted us for drinks on Friday night and two members were kind enough to share their tickets to Sunday’s match with Real Madrid.

We made it to the stadium a little early and made sure to get some bocadillo sandwiches from a local bar to munch on during the game, since we forgot to bring them like soccer novices or something.

We learned how to sing “Yellow Submarine” in Spanish, which was fun.

It was a pretty riveting game, for us not being sports fans in the least. We got to see a few goals.

It took us a few times to figure out what this chant was. It’s the last name of one of the local players.

Toward the end of the game, the tables had turned and all the locals were upset because Madrid was playing dirty, over-exaggerating injuries to run down the clock and such. Watching the crowd react to this was pretty interesting.

(the chant is literally, “this is how Madrid wins…”)

In the end, Vila-real lost the match, but we enjoyed ourselves nonetheless.

Before our rental car was due back, we headed to a Spanish steakhouse that would be difficult to reach without a vehicle.

It wasn’t quite a Nebraska steak, but sometimes it’s nice to break up all this paella with a taste of home.