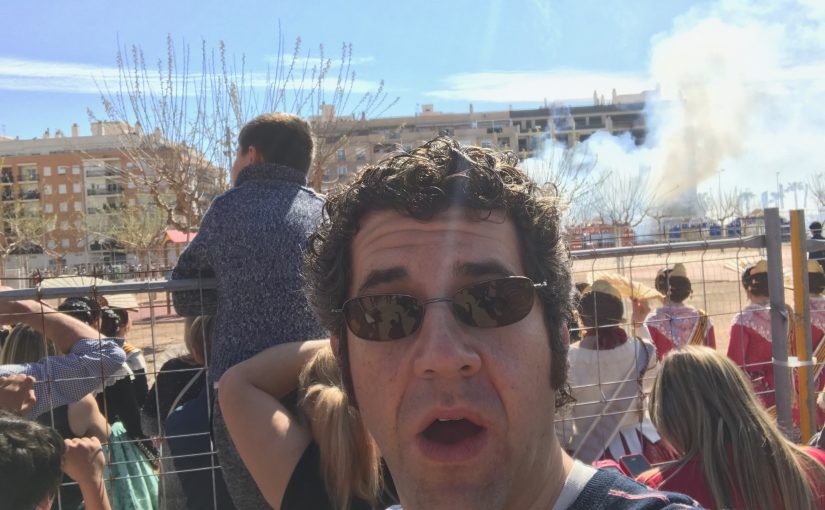 Valencians love their fireworks. The community is Spain’s leading producer of fireworks, in fact. Rare is the night when we’re lying in bed and don’t hear some random pops or booms coming from another part of the city… or even right next door. We do live directly above a local falla, after all.

For the Fallas celebration here, it should come as no surprise, then, that fireworks factor in heavily. Everyone participates, starting at a young age. 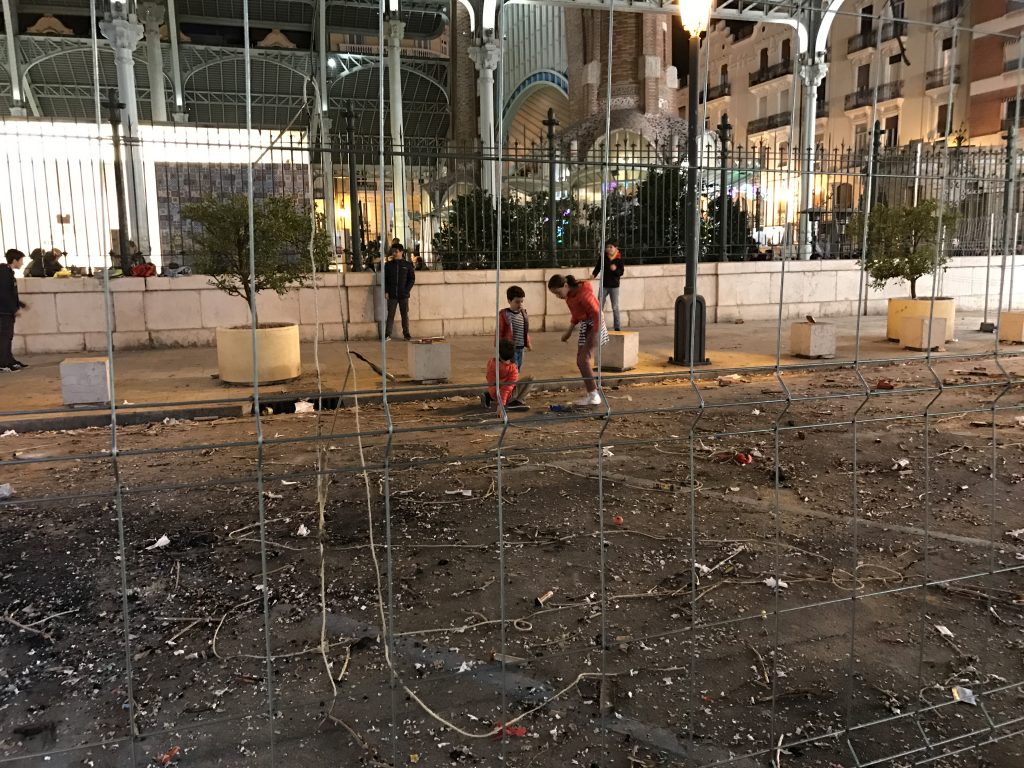 Because we don’t live in the capital city, we didn’t witness the daily wake-up call known as la Despertà, in which parades of people walk through the streets during Fallas week, throwing firecrackers to wake the neighbors. However, it was easy to find evidence on YouTube. Featured during the parade here: the tro de bac, an artisanal Valencian throwing firework that is like 200 of those wussy poppers you used to do as a kid all rolled together (poppers = bombetas here). Seriously, check out the images on Google – you can fit maybe two in your hand at a time!

But one kind of firework above all others is emblematic of Valencian celebrations: the masclet, which is basically a toilet paper tube filled with up to 2 kg (4 lb) of gunpowder. As you can imagine, that’s a pretty big boom.

Now, put thousands of these things in the town square, strung off a central timing fuse, and call it an event. That’s a mascletà: daytime fireworks for the ears more than anything else.

The city of Valencia features a mascletà every day for eighteen days leading up to las Fallas. Each day at 2 p.m., for five to seven minutes, the city explodes with sonic booms. And the show gets bigger each day, too. Those lucky enough to catch the show in the city center don’t necessarily see much, but their bodies are rattled and they might even experience some (hopefully temporary) hearing loss. It’s quite the event. And keep in mind, these occur regularly all throughout the community during the month of March.

We experienced our first mascletà in Valencia on Monday, March 6. It was still pretty impressive – especially since it was our first – but keep in mind they got bigger until the last one on March 19. 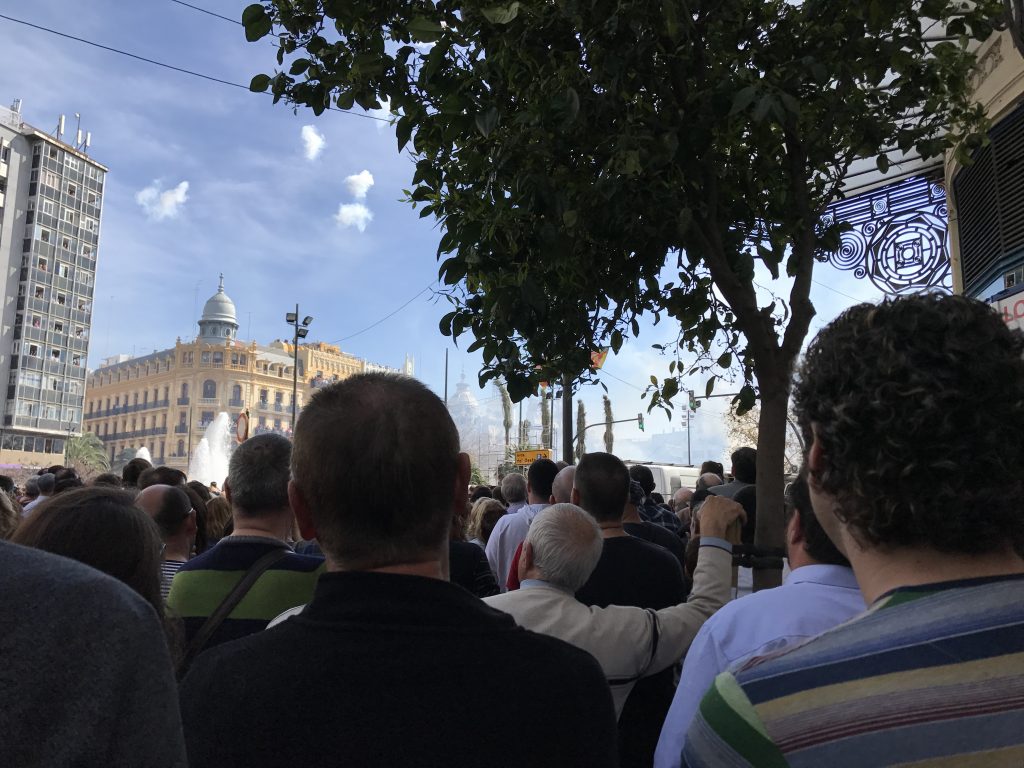 Now, we’re pretty sure that’s not camera shake you see in a lot of places in these videos, but good ol’ fashioned sound pressure. It’s an impressive boom, believe us. 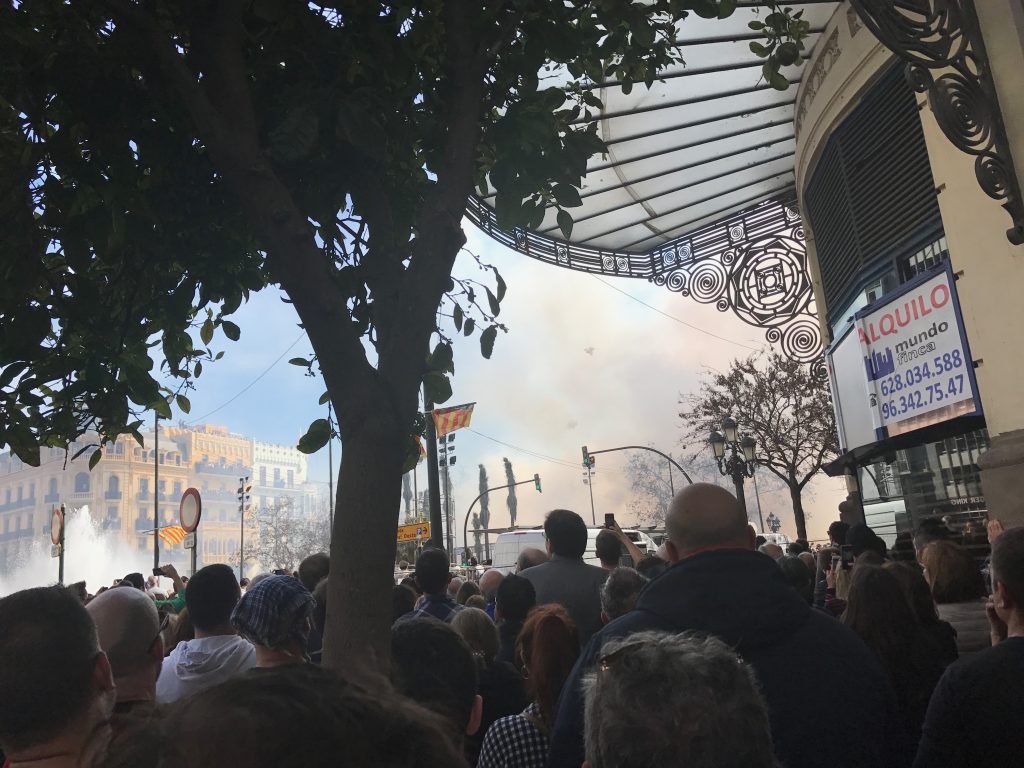 It’s tough to get close unless you get there early. The local paper has a much better video than we could ever capture and our link goes right to the biggest one from March 19. Seriously, go watch that video.

On the morning of the 18th, we were lucky enough to be in Valencia very early, before the crowds came, and we saw pyrotechnicians setting up that day’s mascletà in front of the Ayuntamiento, or city hall. 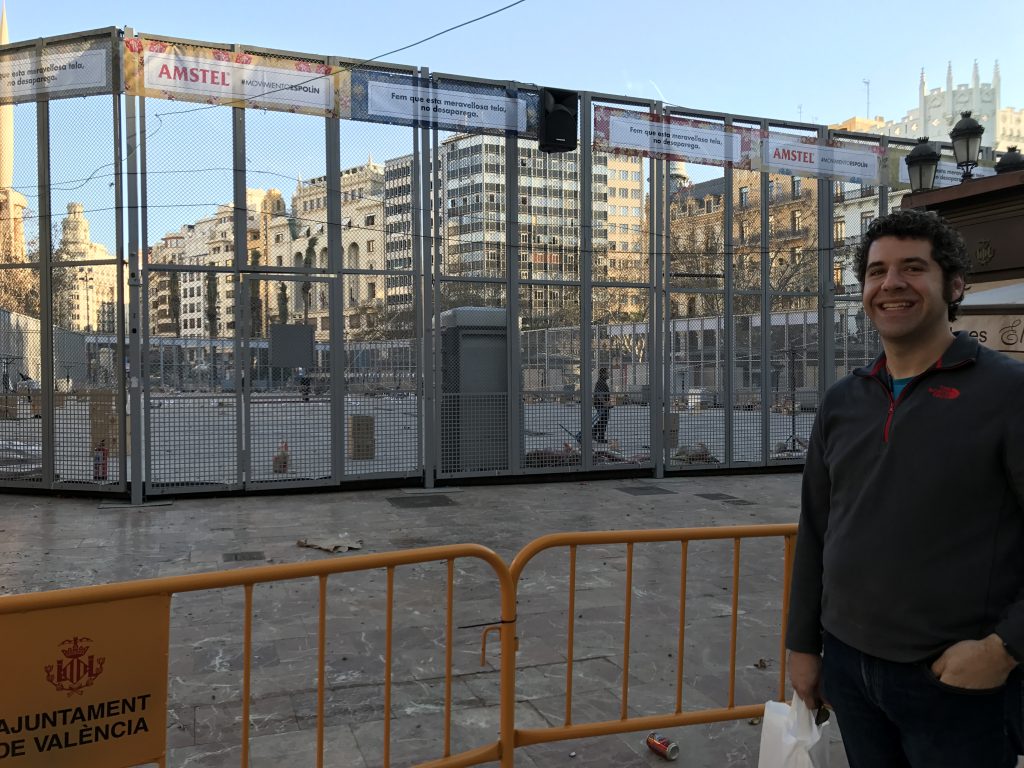 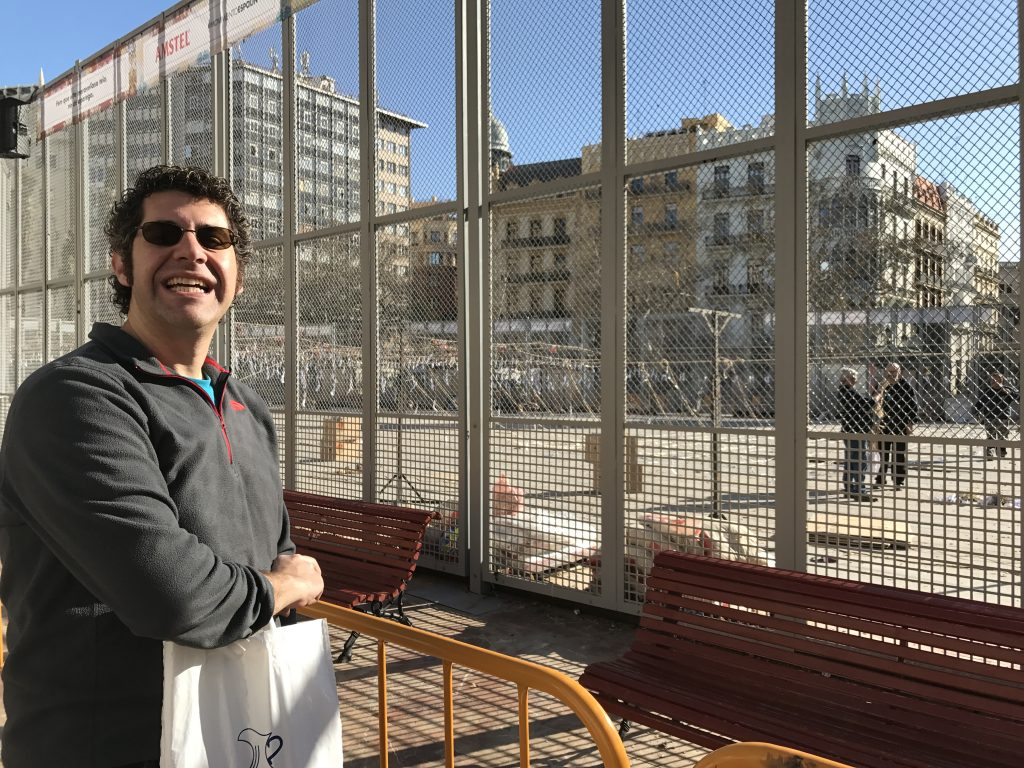 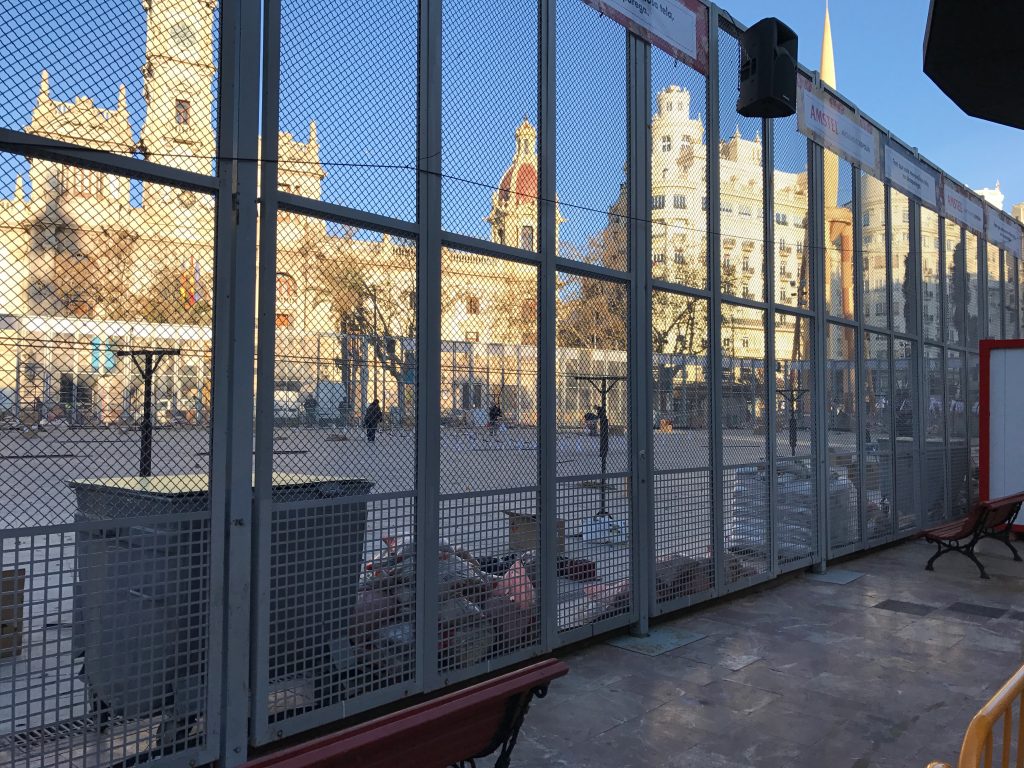 Don’t think it’s all daytime fireworks in the Valencian Community, however. Even though we were running low on sleep, we were determined to make it to 1:30 a.m. (!) for the Gran Nit del Foc (foc is Valenciano for “fire” and “fireworks”).

And no, the similarity of this Valenciano word for “fireworks” to an English palabrota (four-letter word) did not go unnoticed, either.

As we might have mentioned, we had awakened before dawn, so we barely made it to the late start time. Nevertheless, we persisted, and when 1:30 rolled around we finally saw quite the display of aerial fireworks, similar to those one would see on Independence Day in the U.S.

The next day, back home in Burriana, we got to see a mascletà up close. Really close. A smaller city has fewer people, which means we got much nearer to the literally deafening action!

There were still a lot of people, though.

While we waited for the display to begin, we saw some TIRED falleras – remember, this was the last day in the festival, and they’d been partying hard-core day and night for a full week! 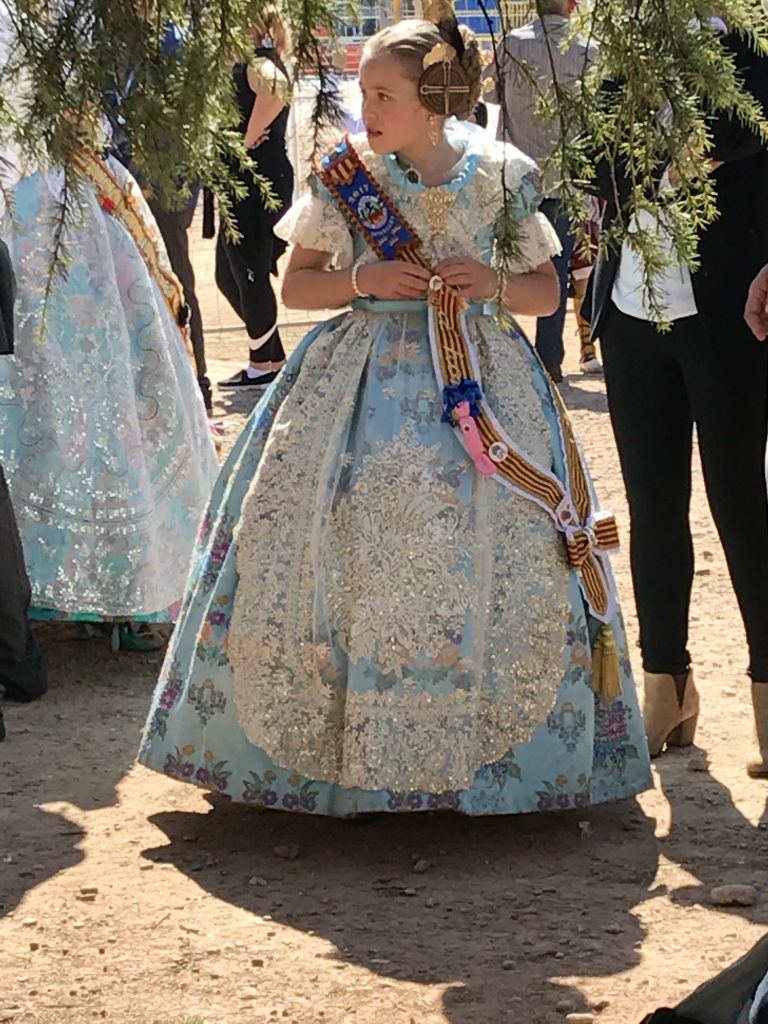 When the reina fallera (Fallas queen) arrived with her entourage, we knew the show was about to start!

There are some real champion whistlers here.

Your average mascletà begins with the local queen asking the pyrotechnician to start the fireworks. Then all hell breaks loose as locals, tourists, and – yes – falleras in traditional costume all sit back to enjoy the spectacle. 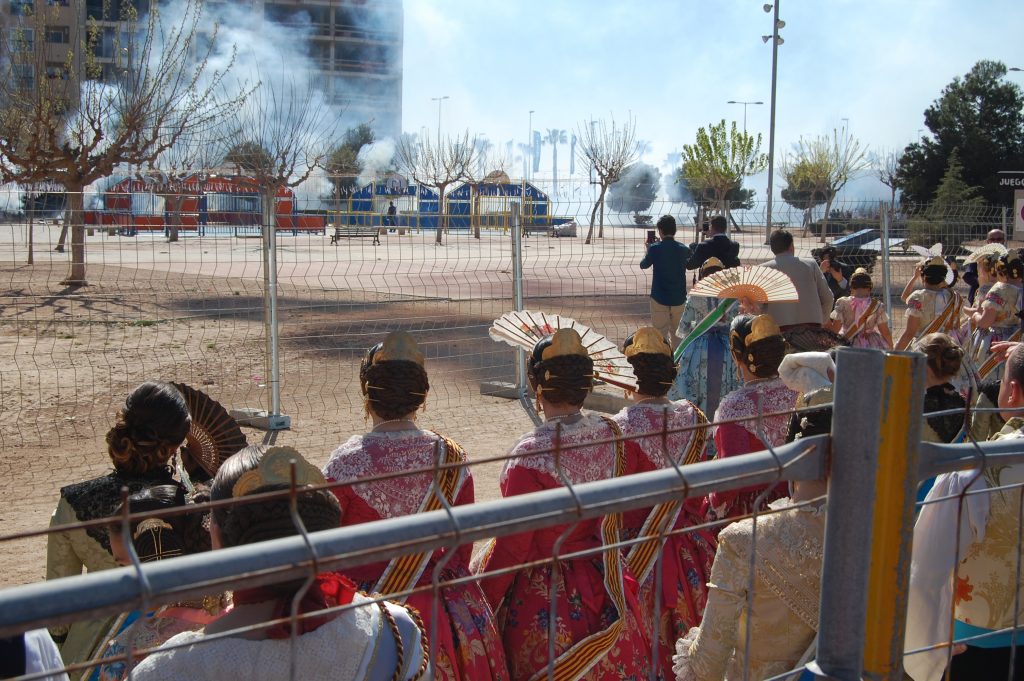 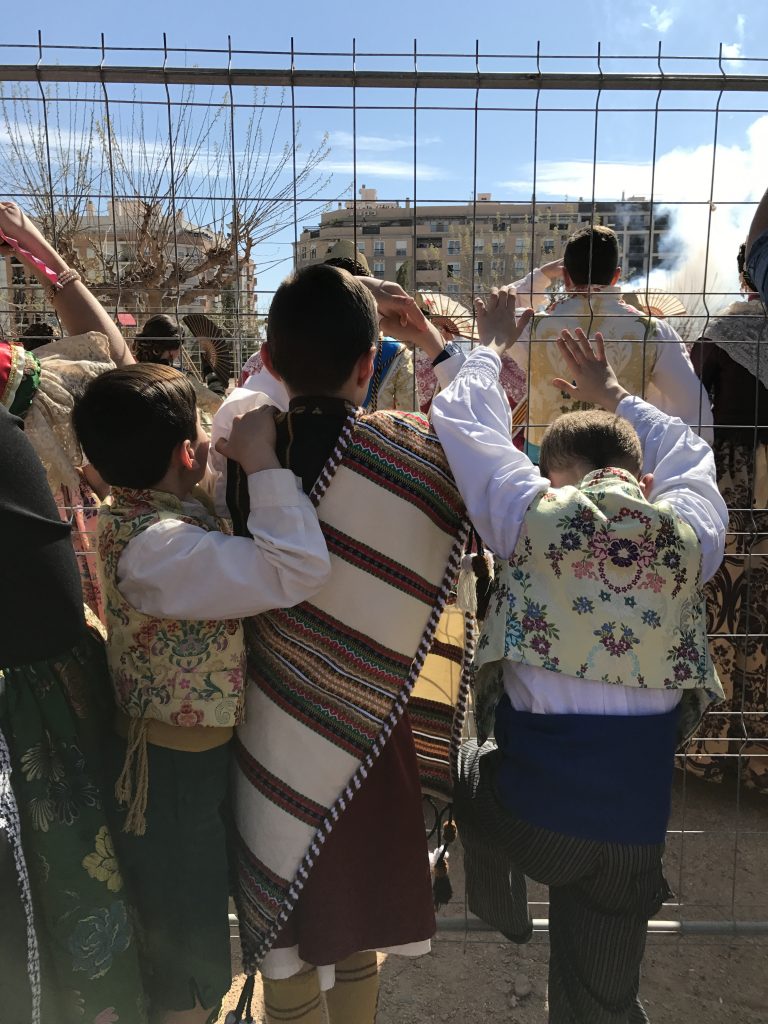 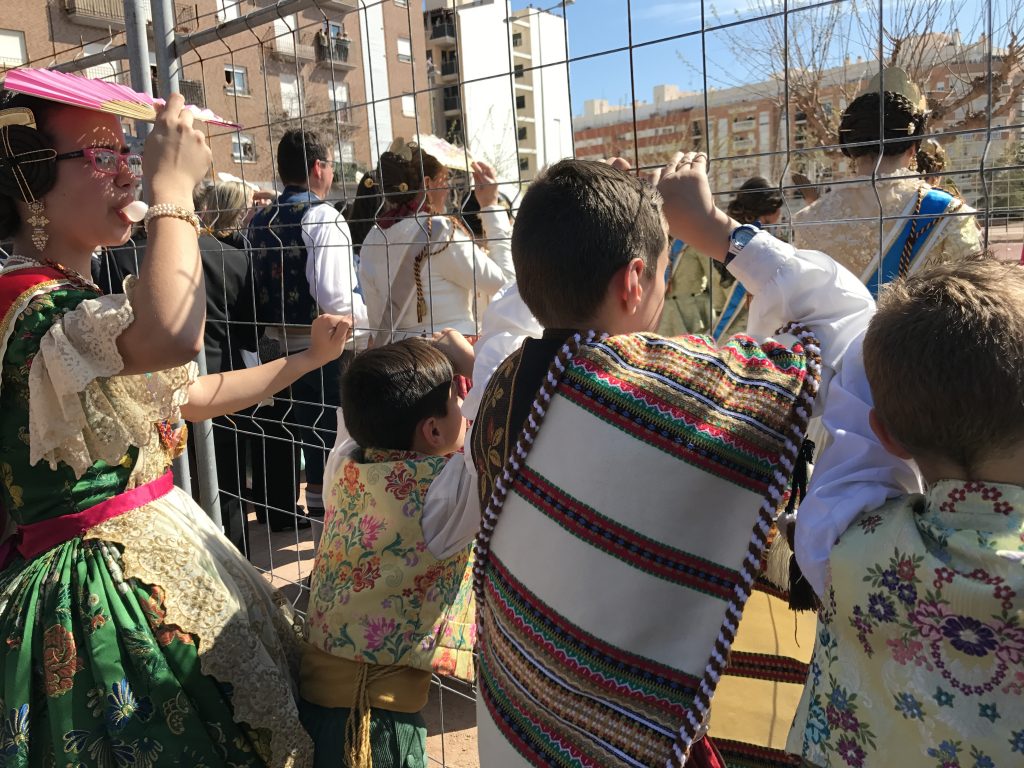 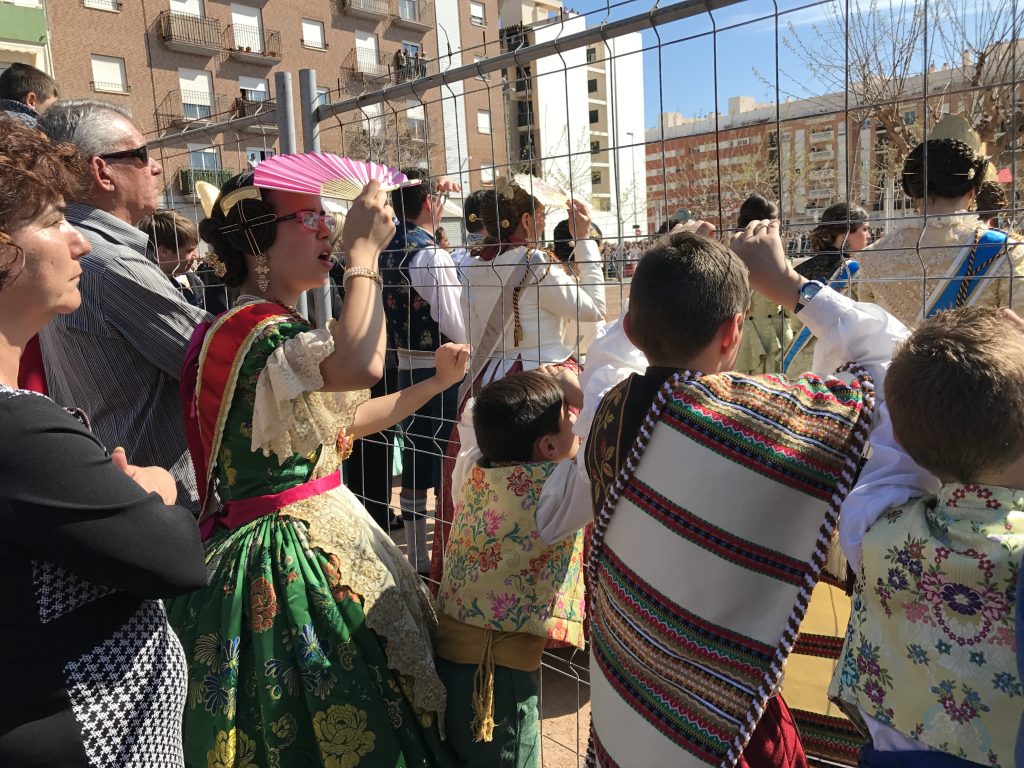 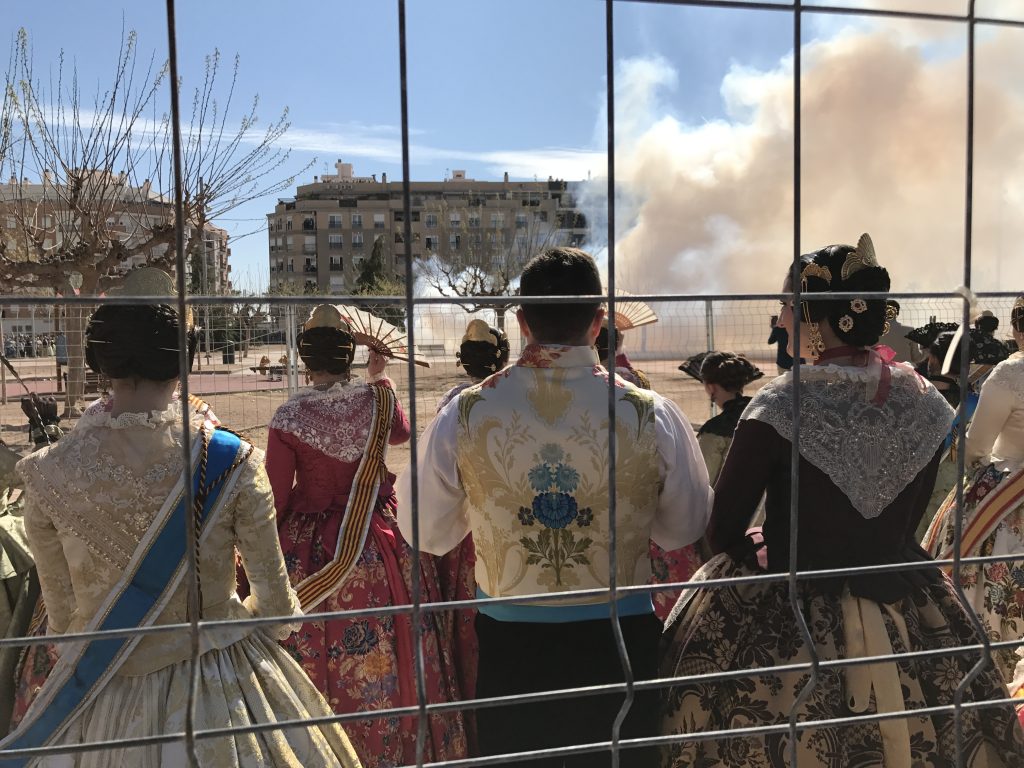 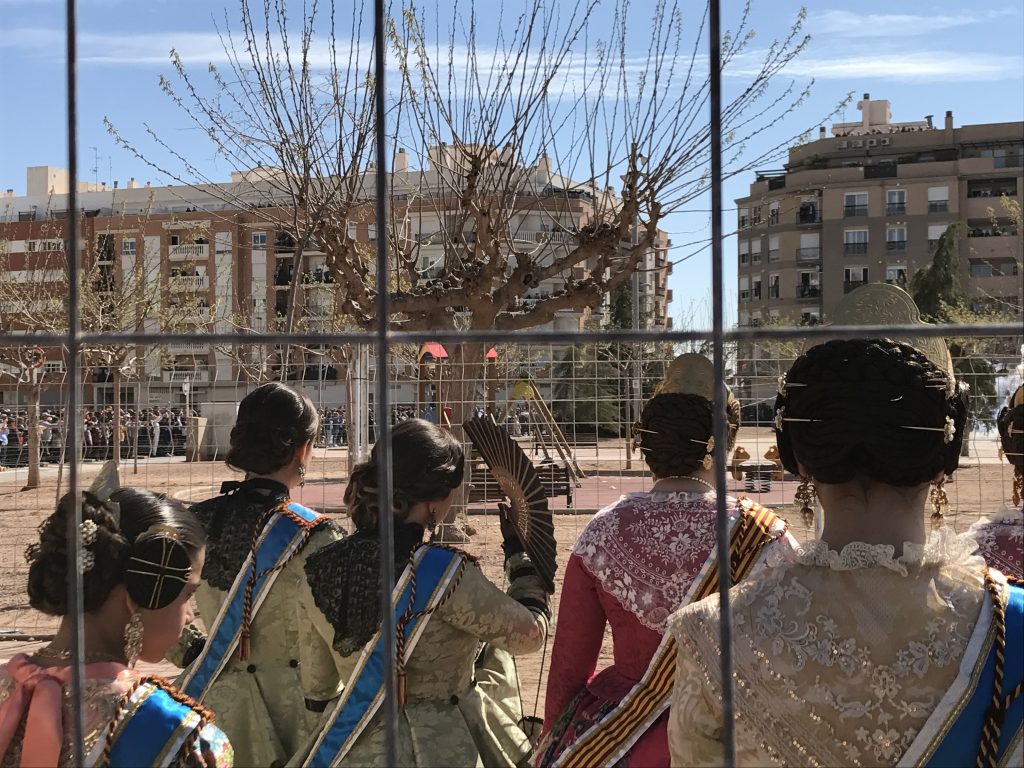 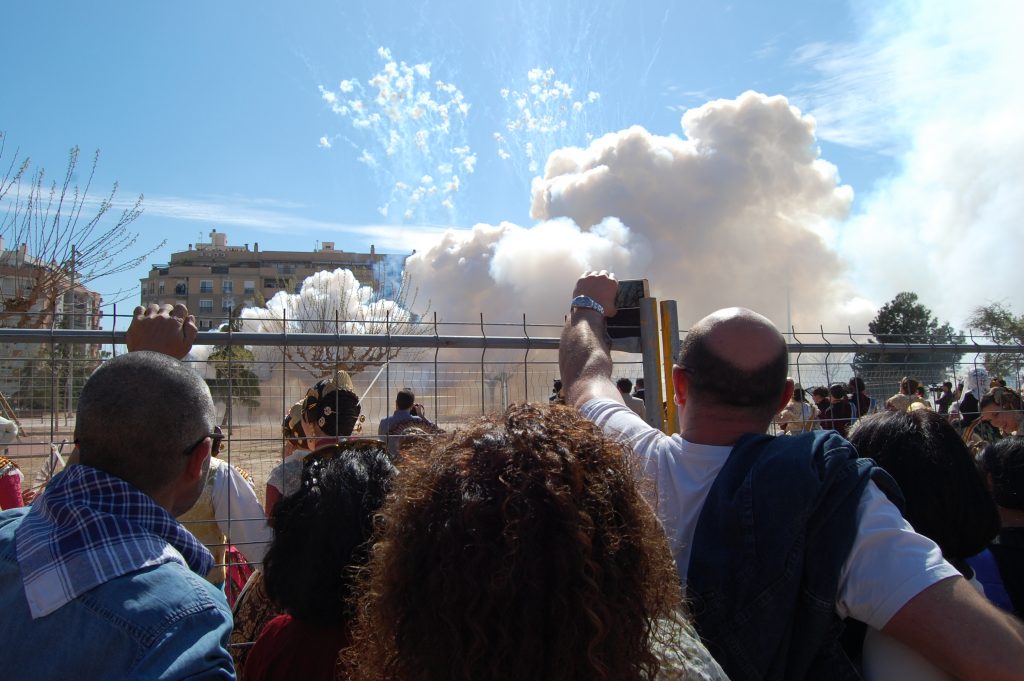 As any good pyrotechnician knows, you save the biggest booms for the end. Gotta leave ’em smiling.

The thing about a mascletà is that it’s loud. Really loud. Oh, did we mention that? But, like, it’s so loud that it can be heard from the next town over. Castellón de la Plana is at least 10 km away from our home, and yet we took the following video from our balcony during one of their mascletades (proper plural in Valenciano, yiiiuh!) during that city’s big festival, la Magdalena.

As Will Smith said… “Hate to be the man gotta clean this mess.” Doer happened to be in the main plaza in Castellón the day after they set off all their mascletades for Magdalena. 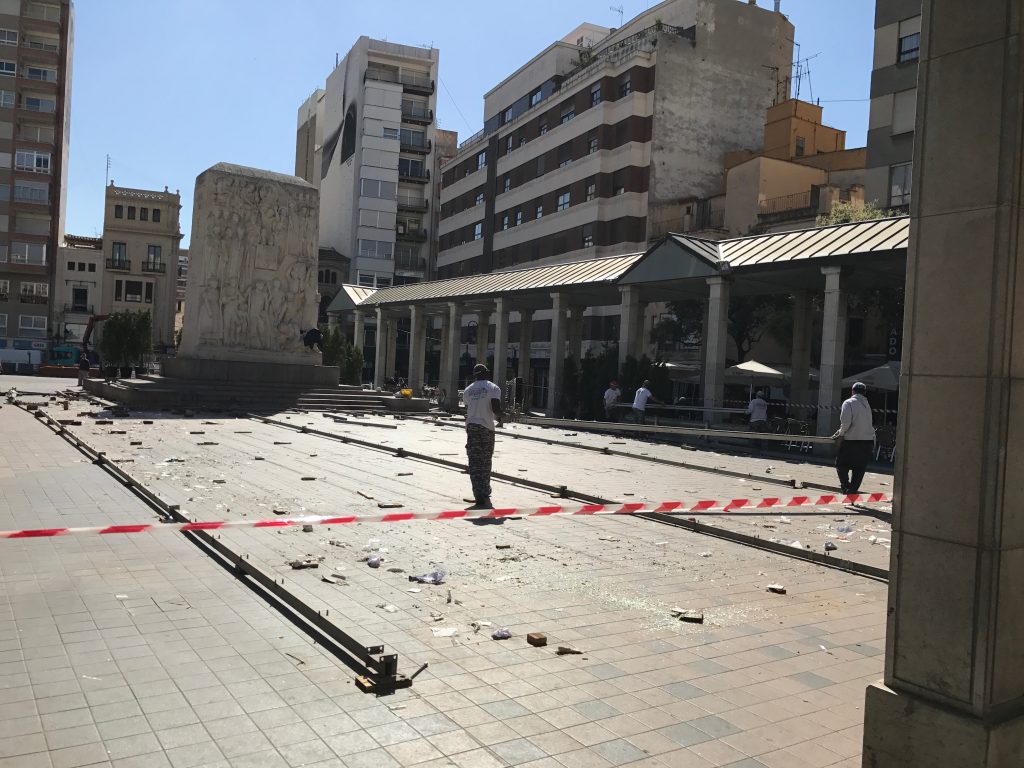 Ufffff… Valencia, too, was very prompt with post-mascletà cleanup of a different sort: litter left by the crowd.

By the way, at the end of the week the fallas monuments all get their own mini mascletades that attach to the structures and cause them to burn during the final act of the festival – la Cremà. More about that next time in our final installment of Finding Ninot: The Fallas Chronicles.