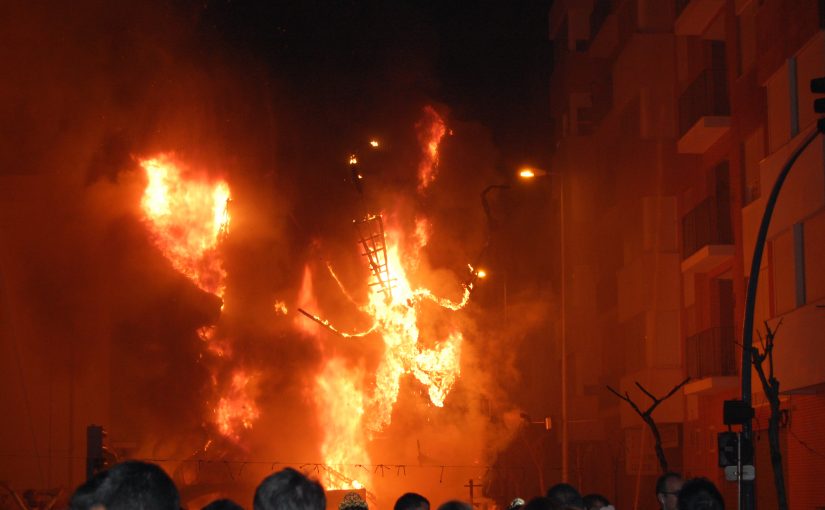 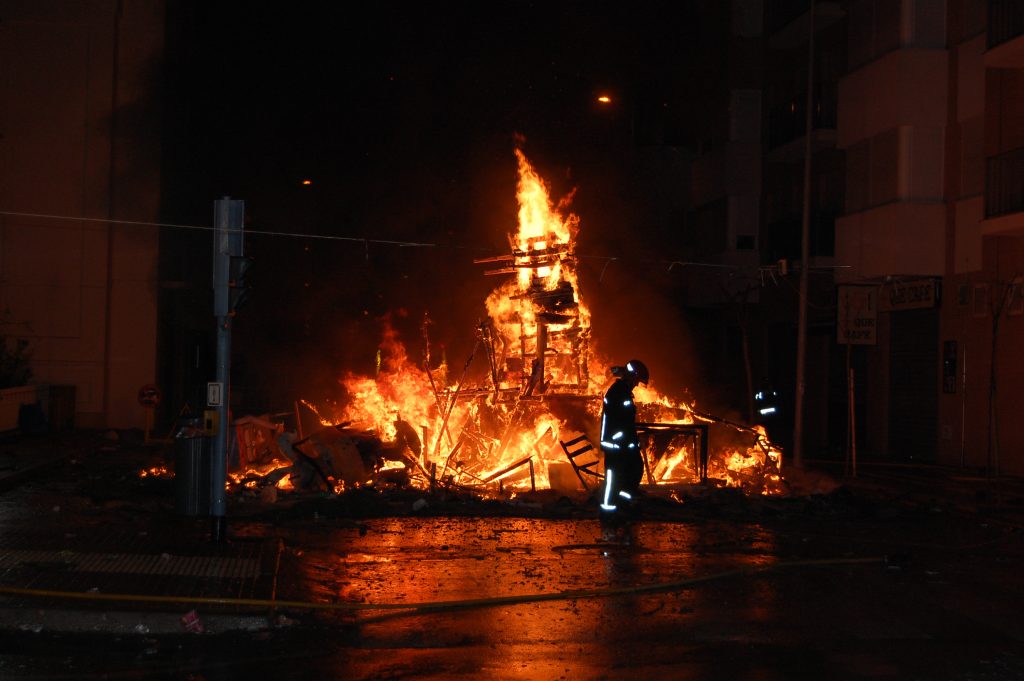 And so, our Fallas coverage draws to a dramatic end. All of the parades, fireworks, and other events in our city and in the capital, Valencia, led up to this final moment in the life of any of the enormous monuments: the burning, also known as La Cremà (quema in Spanish). 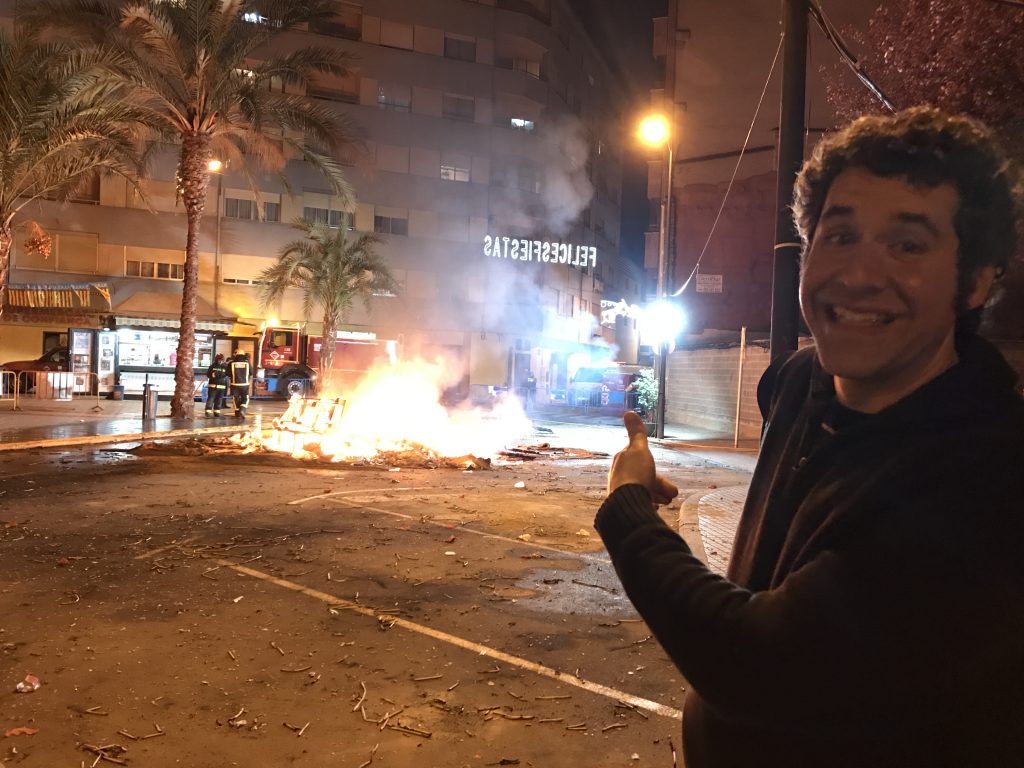 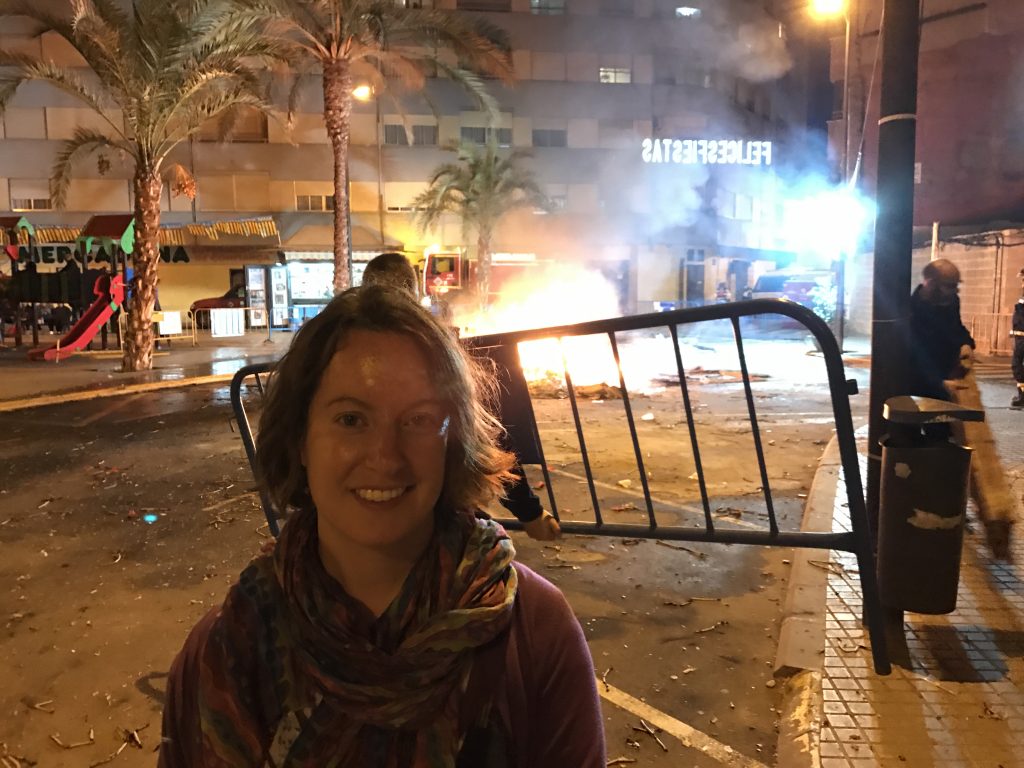 We came home to Burriana Sunday, March 19, after a brief visit to Castellón to see the Magdalena celebration, only to encounter a smoldering pile of rubble in the street where one of the children’s fallas had stood before we left town. And down the road, smoke in the sky indicated there was more stuff on fire. 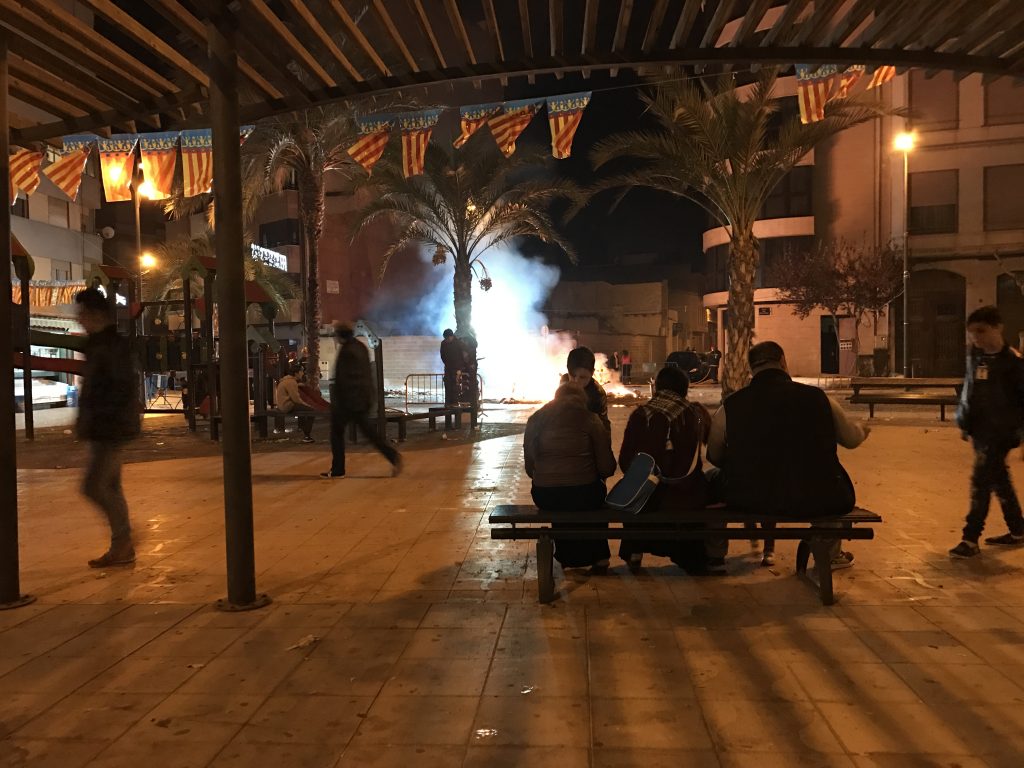 This was all to be expected, of course. And it could only mean the end was nigh for Beauty & the Beast, the falla directly beneath our terrace. First they burn all of the children’s, then the big ones go boom. The pyrotechnicians were hard at work, preparing our neighboring falla to meet its fate. Or maybe they were just local pyromaniacs…

Yes, they are attaching strings of fireworks to the fallas – that’s how they start the giant monuments on fire, natch’! 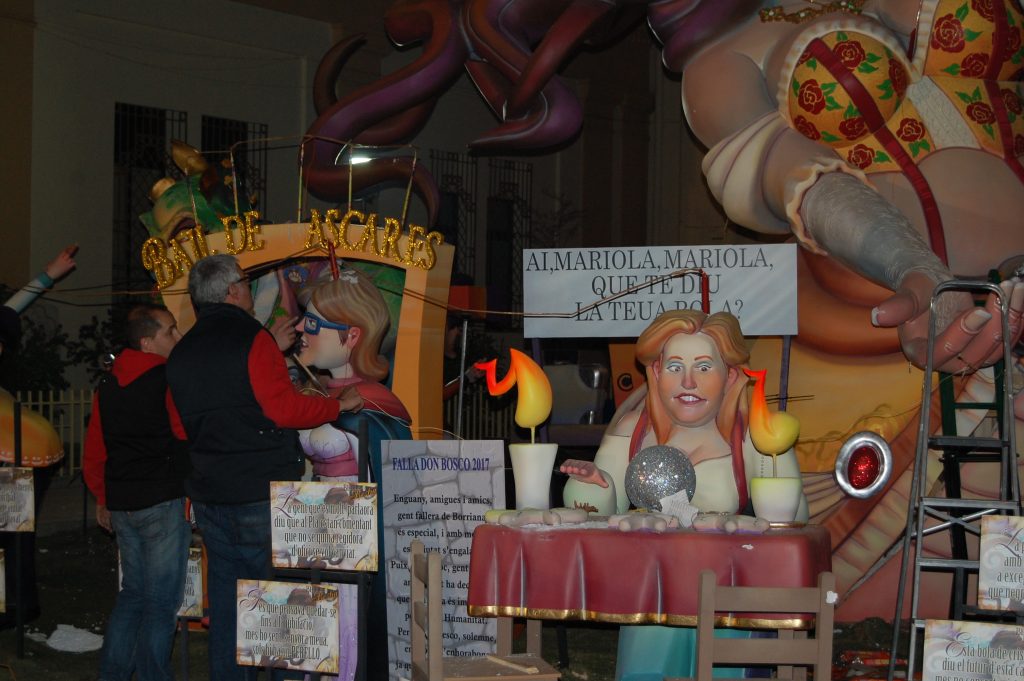 Meanwhile, the children continued to play with petardos.

Eventually, though, they had to make sure the children’s fallas were completely extinguished. They had another bonfire to begin, after all.

But before that burn began, we headed down the street to see another favorite, Aladdin & Friends, bite the dust. Here’s a before picture from earlier in the day: 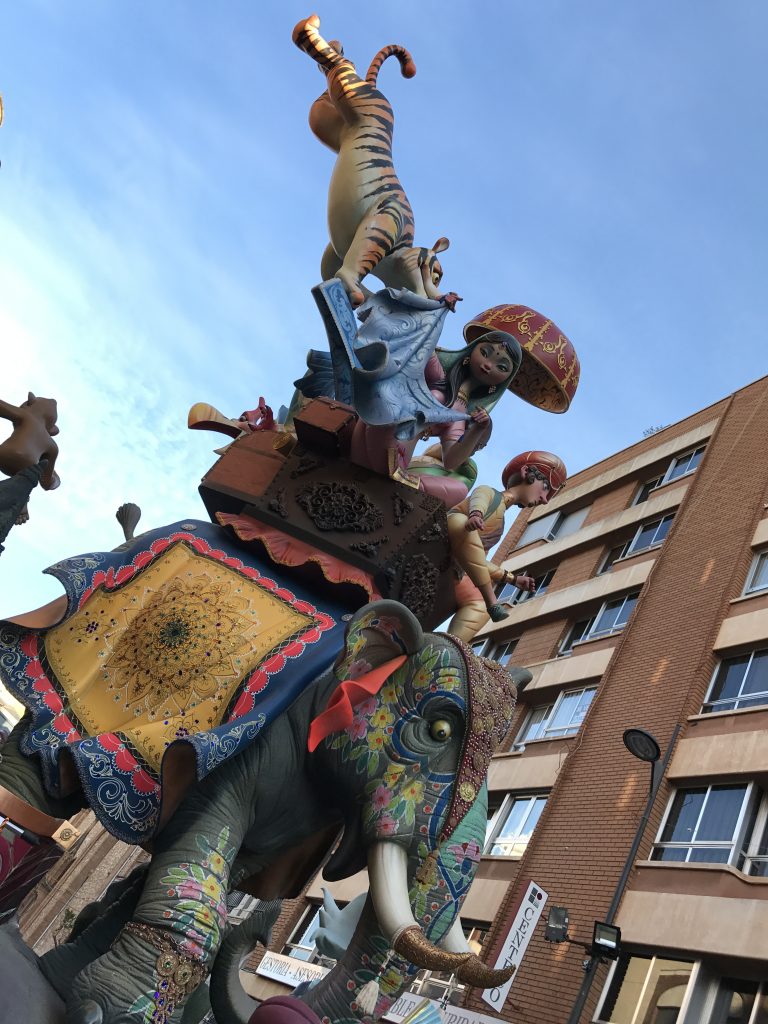 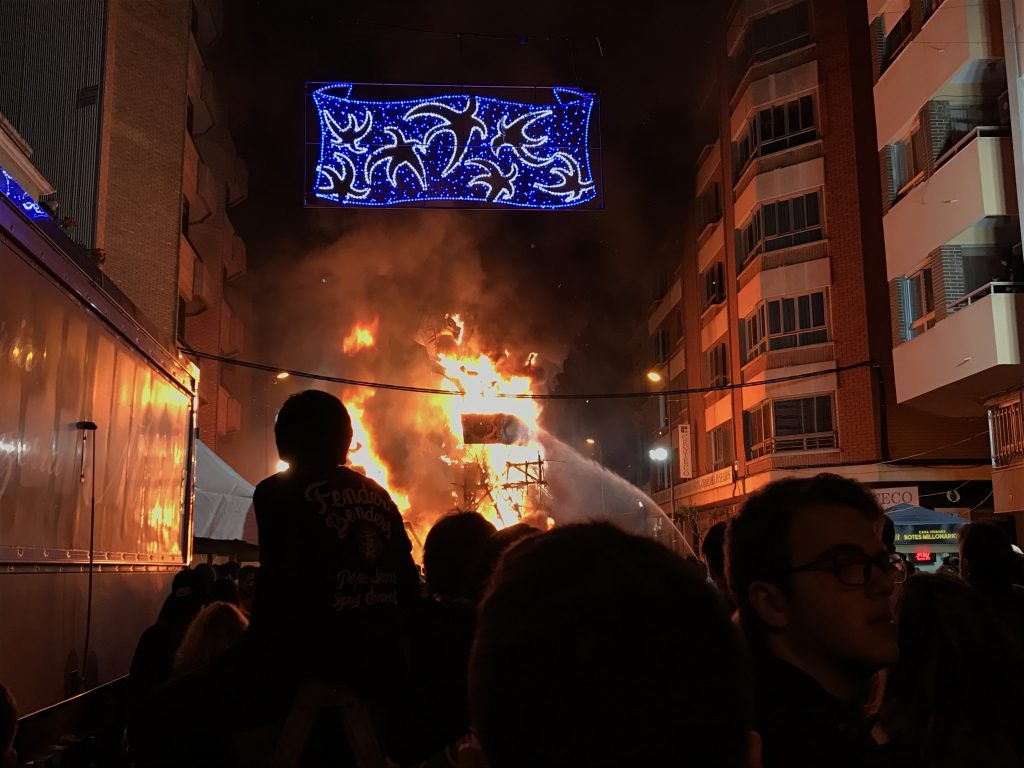 Here’s how it went down: look closely and you can see the firemen and their hoses hard at work. How those wires hanging over the street remained intact is a mystery to us, too… 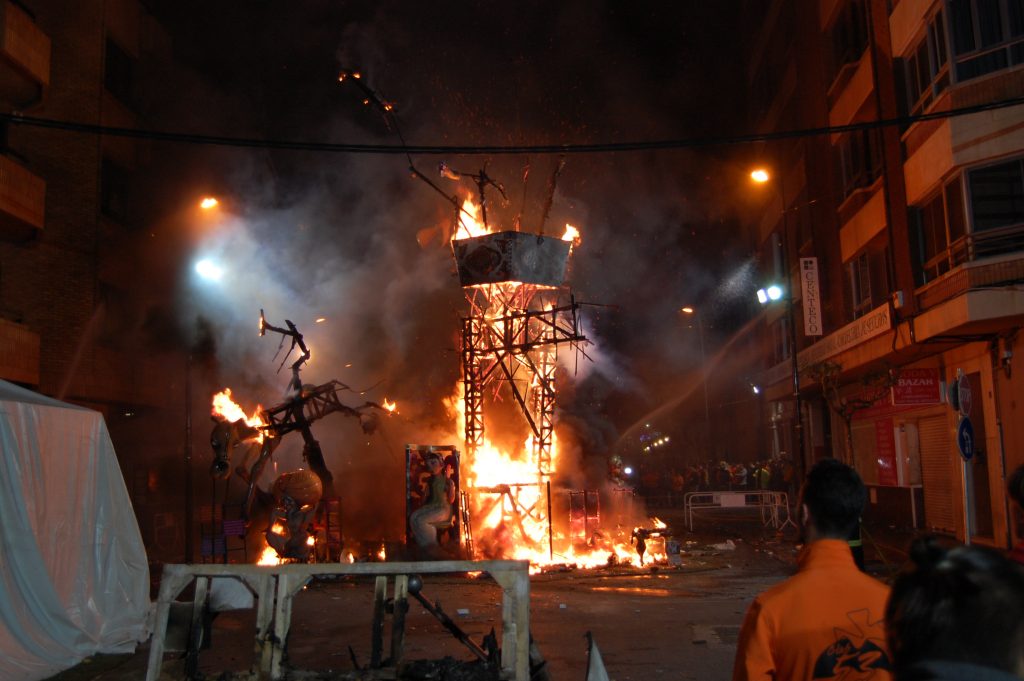 Back over at Beauty & the Beast and company, musicians animated the waiting crowd. 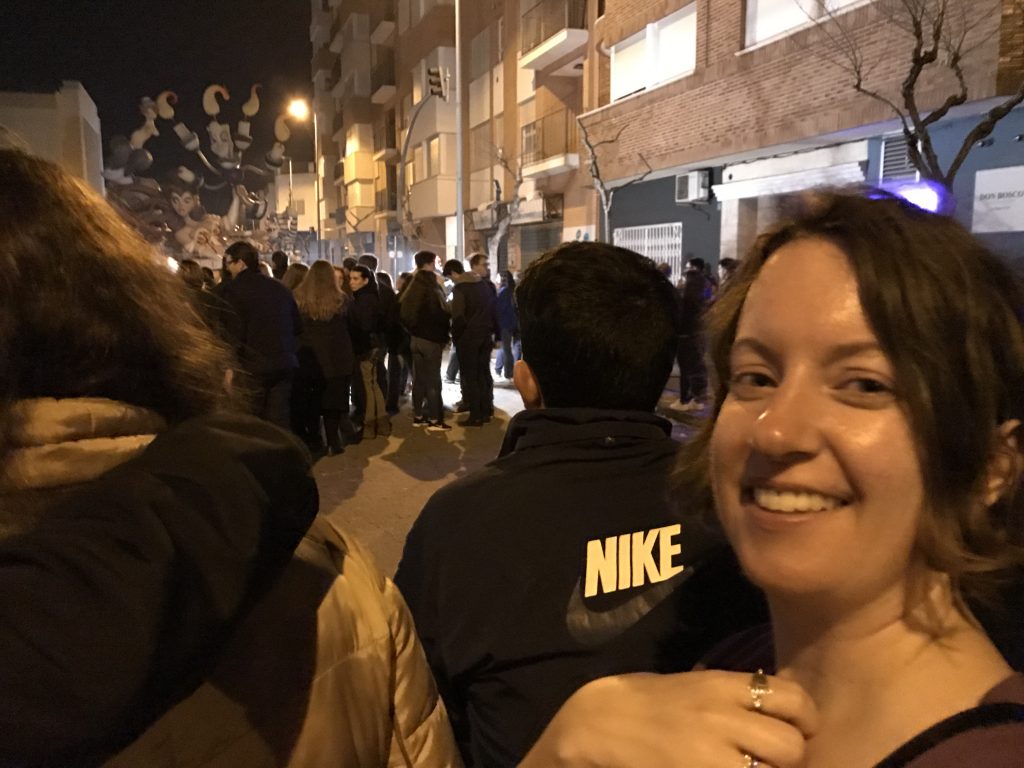 And then, finally, our moment came. Firefighters arrived and gave the go ahead. Good thing Dreamer had tightly shut and sealed the windows to our place hours earlier. It was go time – this time with aerial fireworks and music!

Here’s one more look at that beginning: 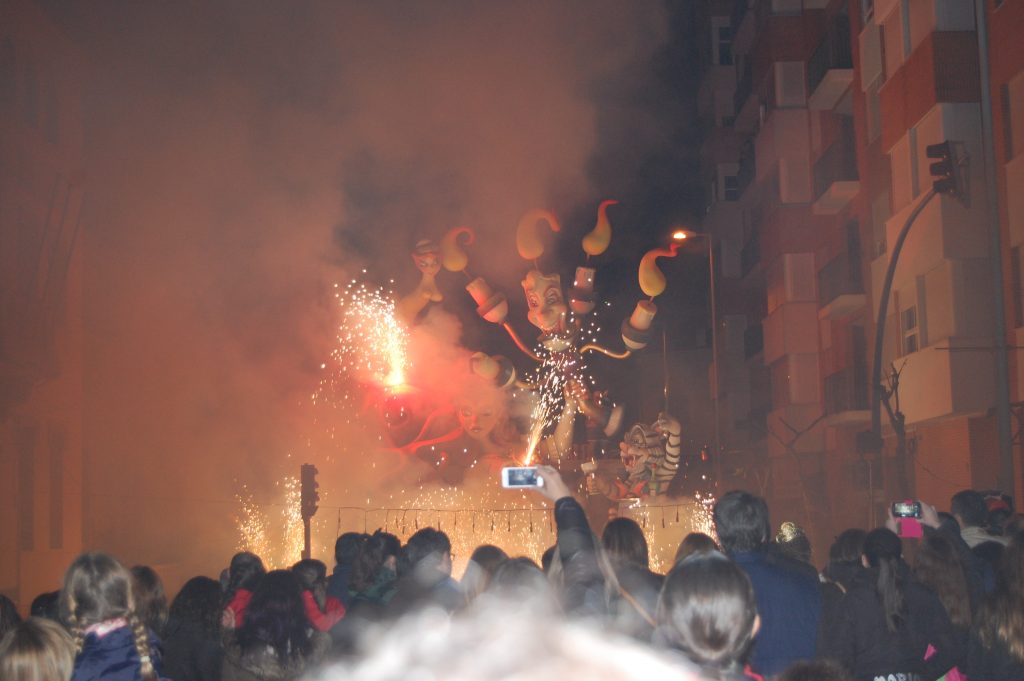 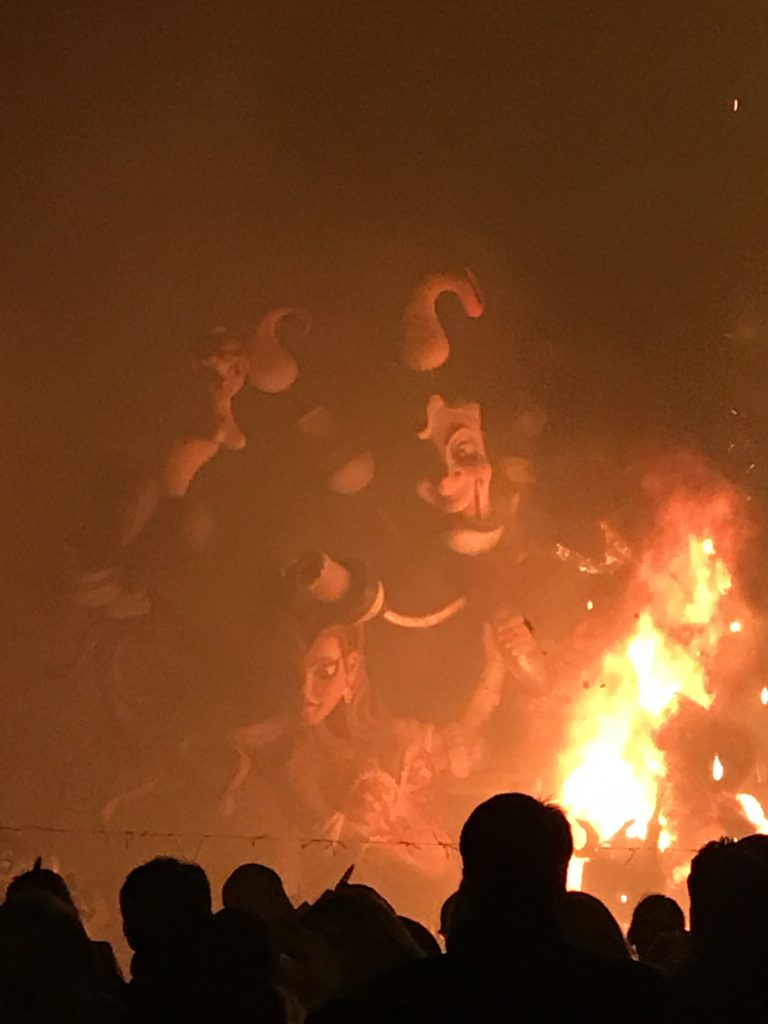 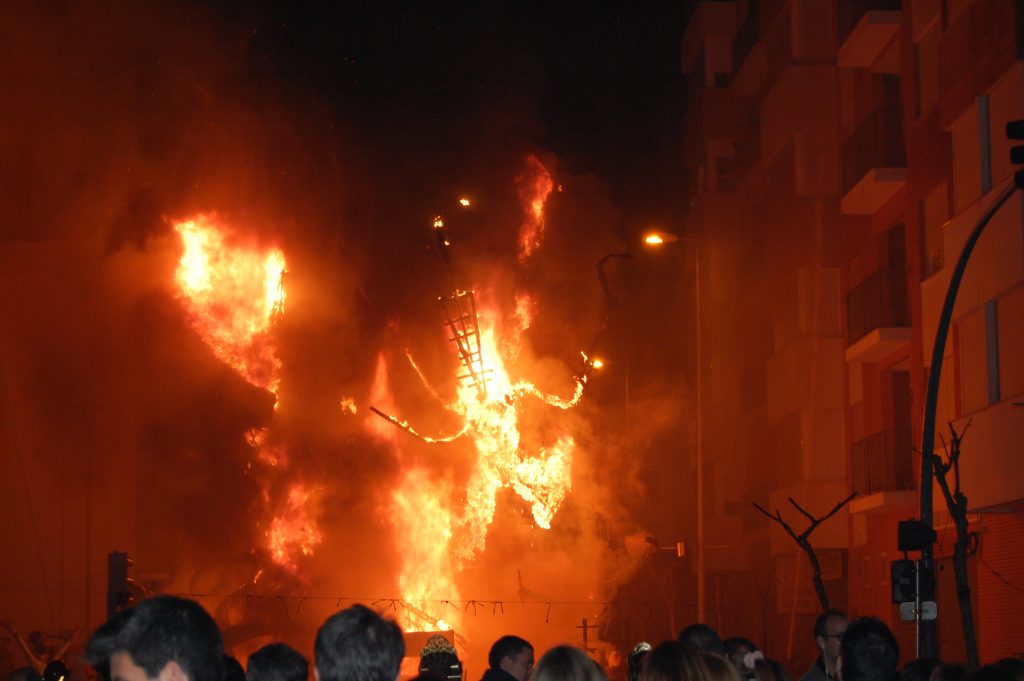 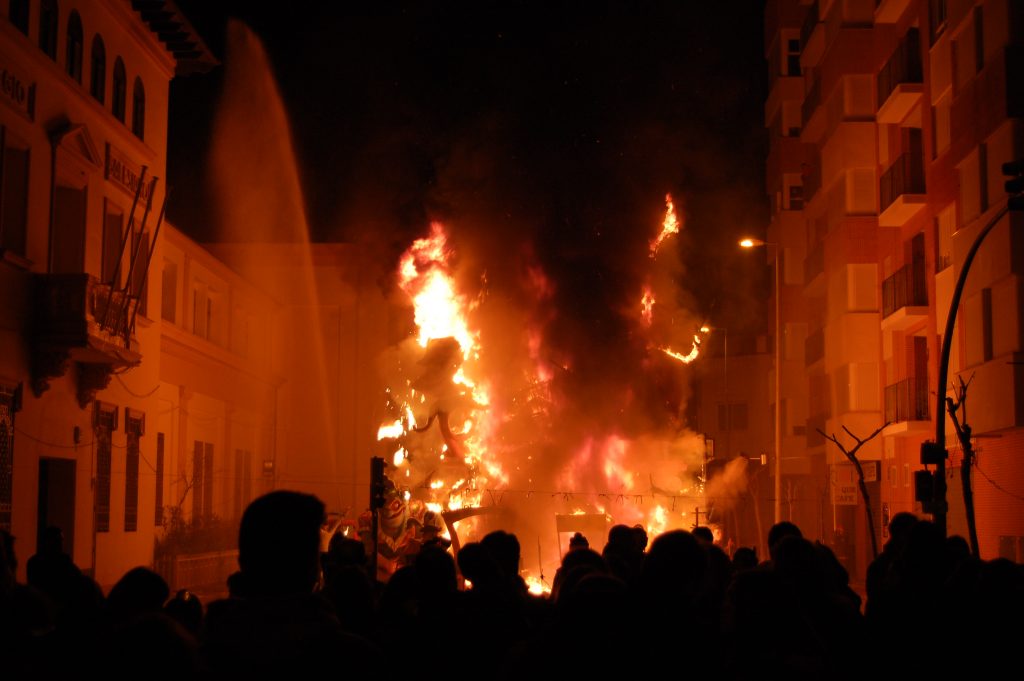 This one took a lot longer to burn than the Aladdin one. There were even more fireworks that went off within the structure mid-burn. 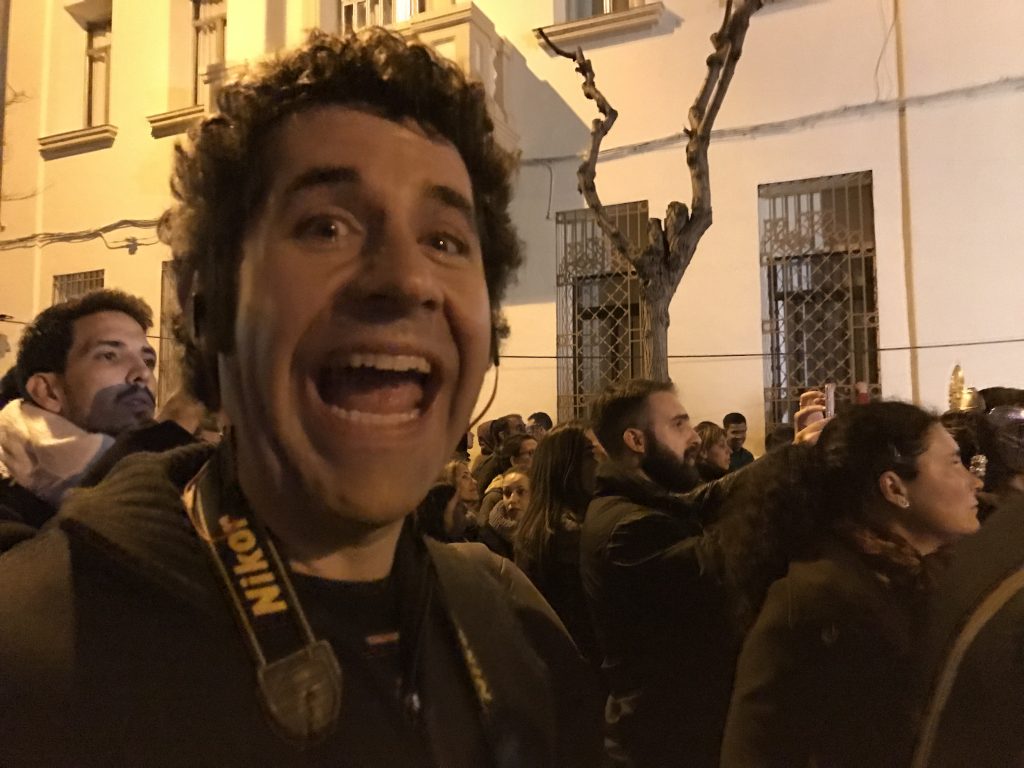 When they grew tired of watching, spectators danced to live music.

Sometimes, when the pieces at the edges don’t burn, the firefighters give a helping hand. 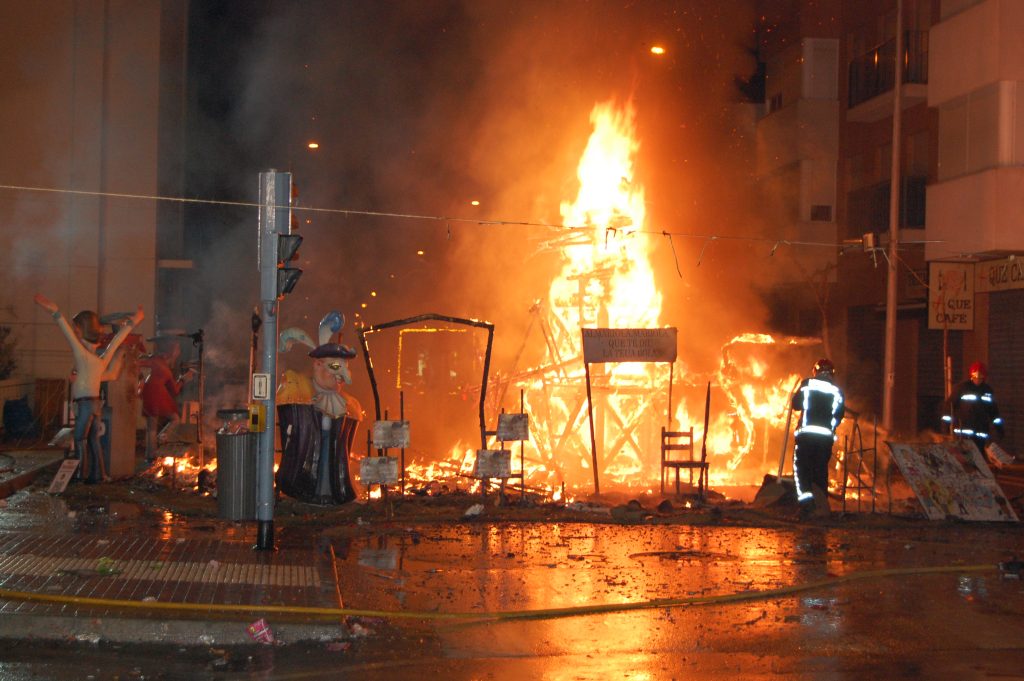 And the charanga band plays us out… 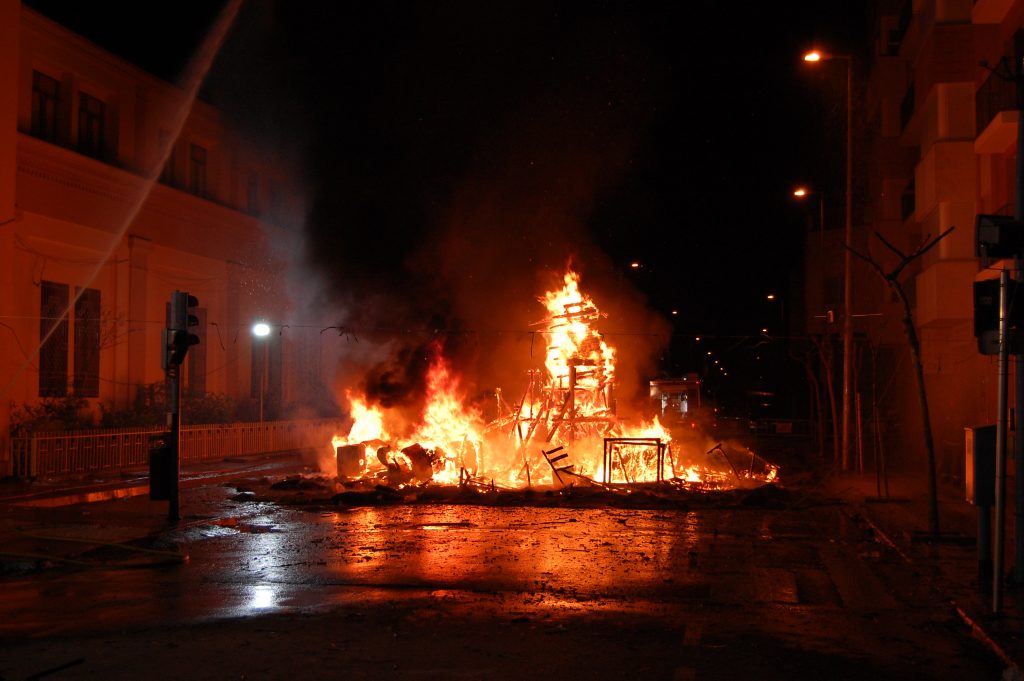 While it was fun to watch, it wasn’t exactly a picnic for the lungs.

This can’t be great for the environment, either – right?! It’s a wonder a firefighter on each side with a hose can keep the flames in check, even. See also: those power lines by the Aladdin falla earlier in this post. Yet the tradition continues and everyone is cool with it. 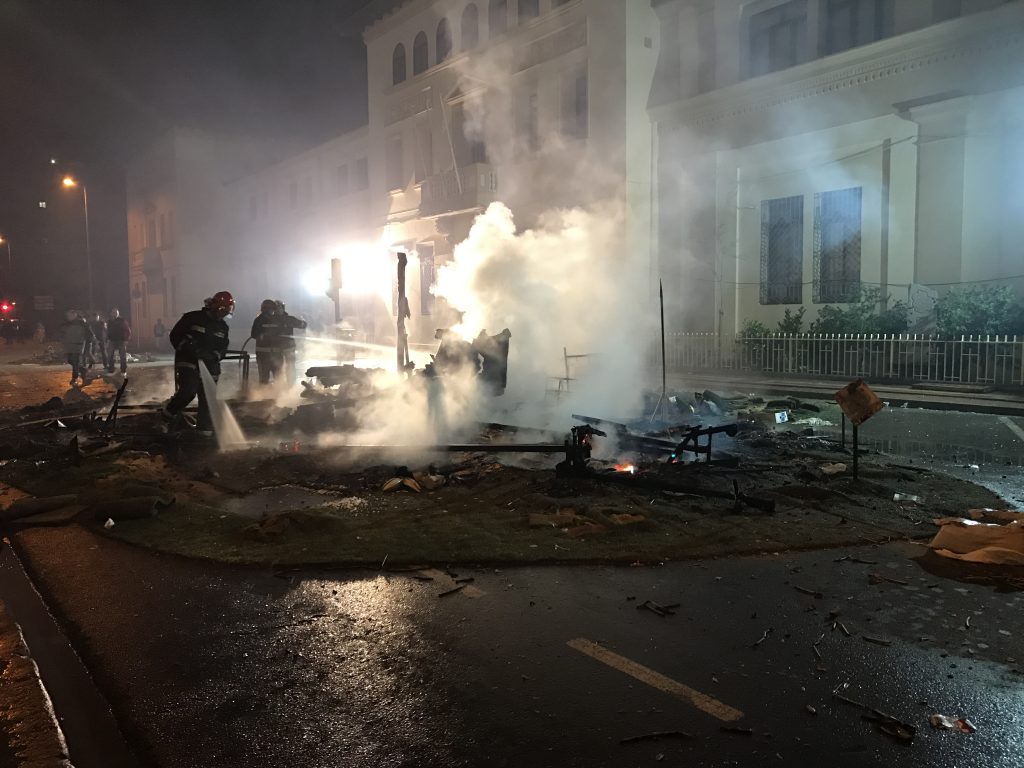 When we saw the ground before heading up to our place, we knew opening the door to our balcony in the morning would be fun…

These things are made of styrofoam and papier-mâché, after all. Just look at all the ash floating upward in the photos and videos above. 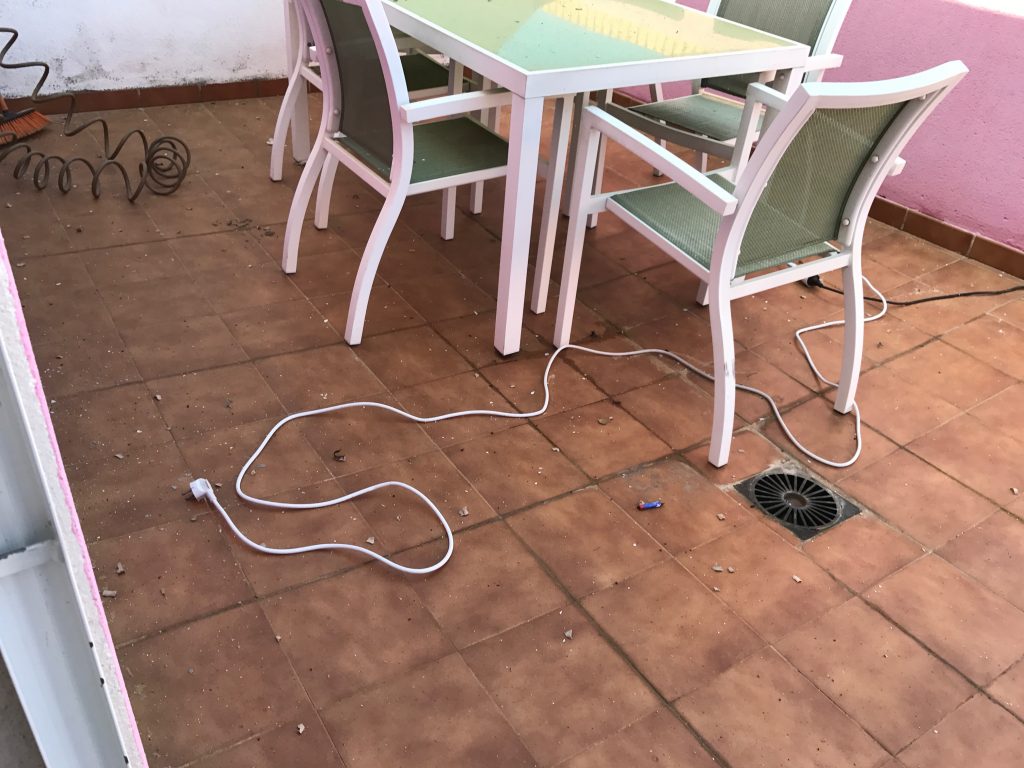 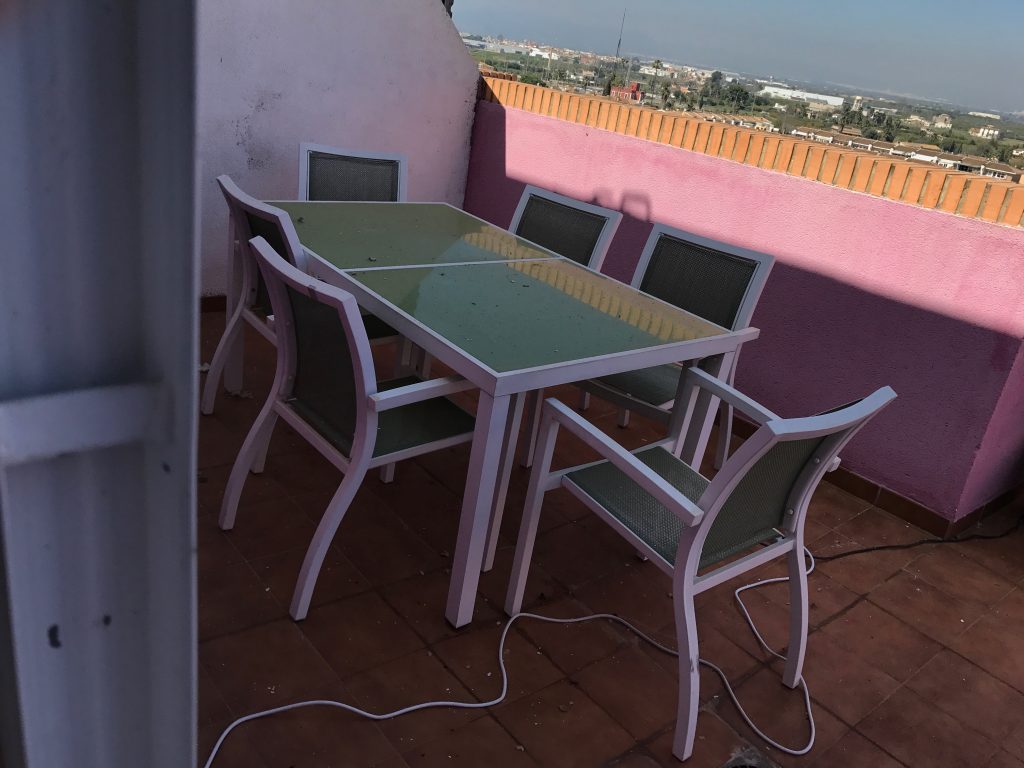 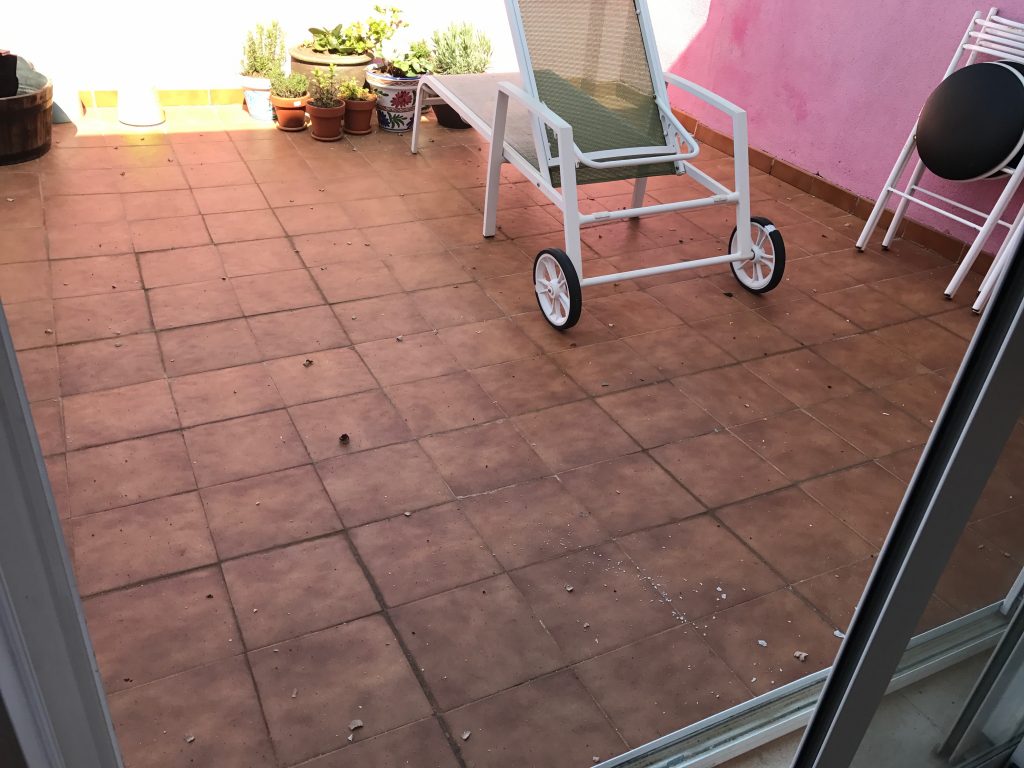 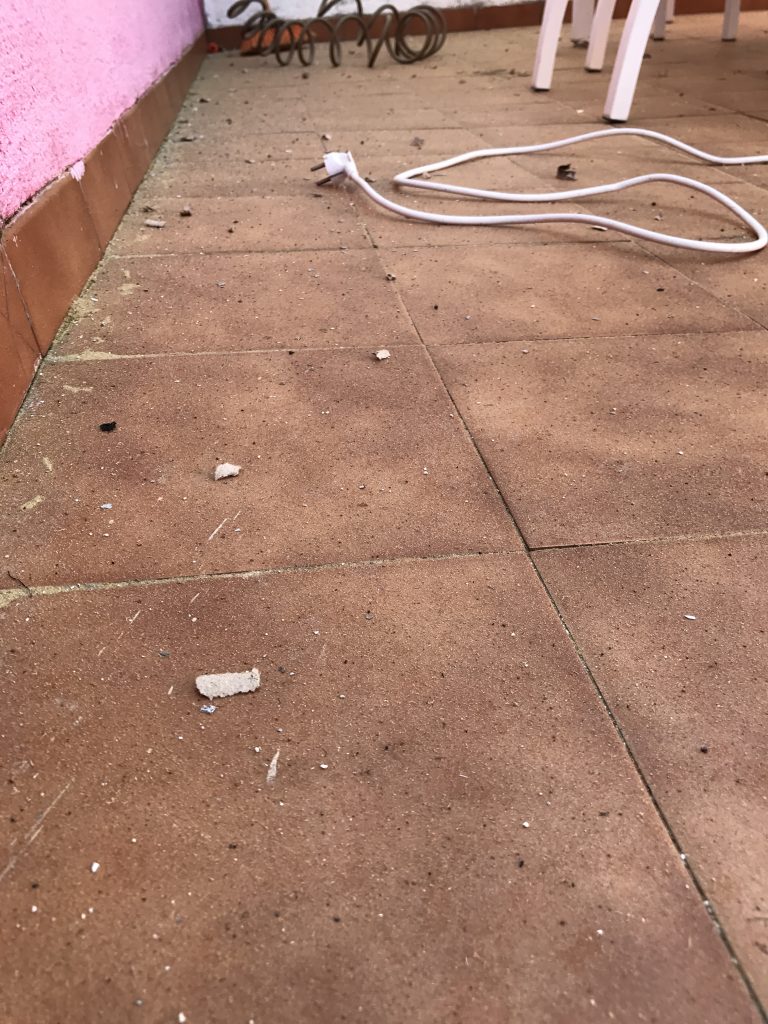 What we did not expect was the giant pothole the smoldering children’s falla left in the street. Heh, oops. 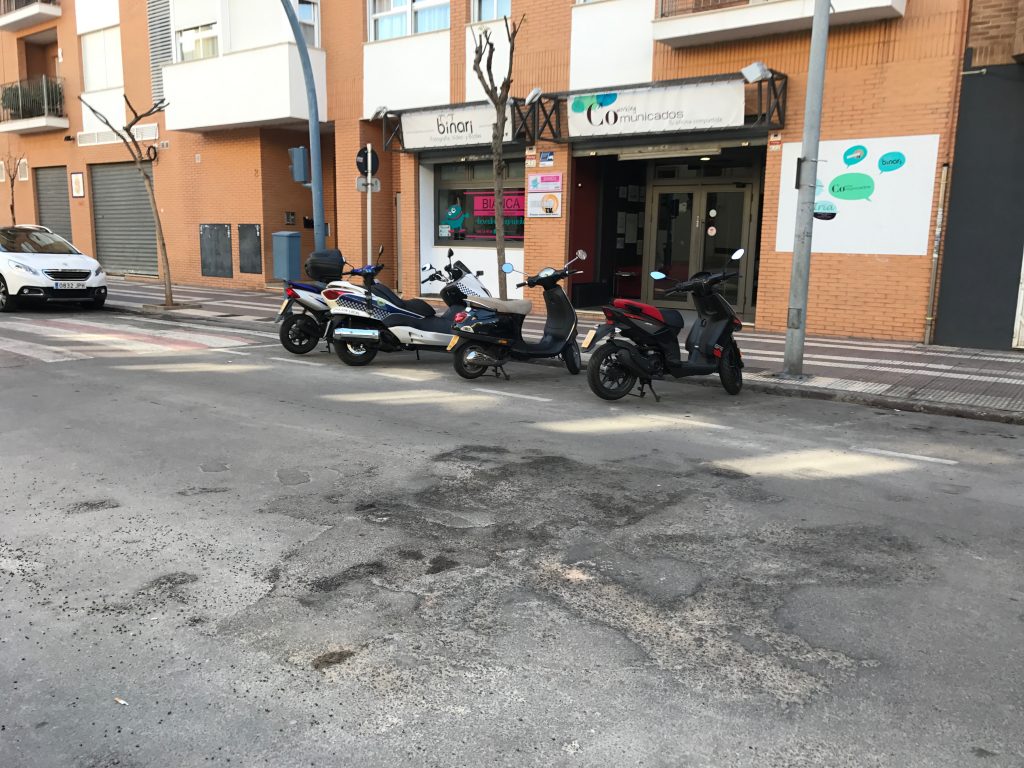