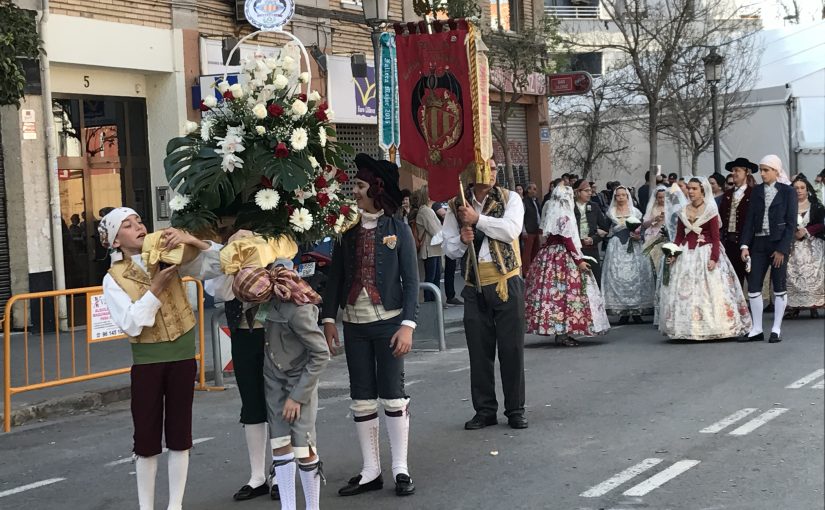 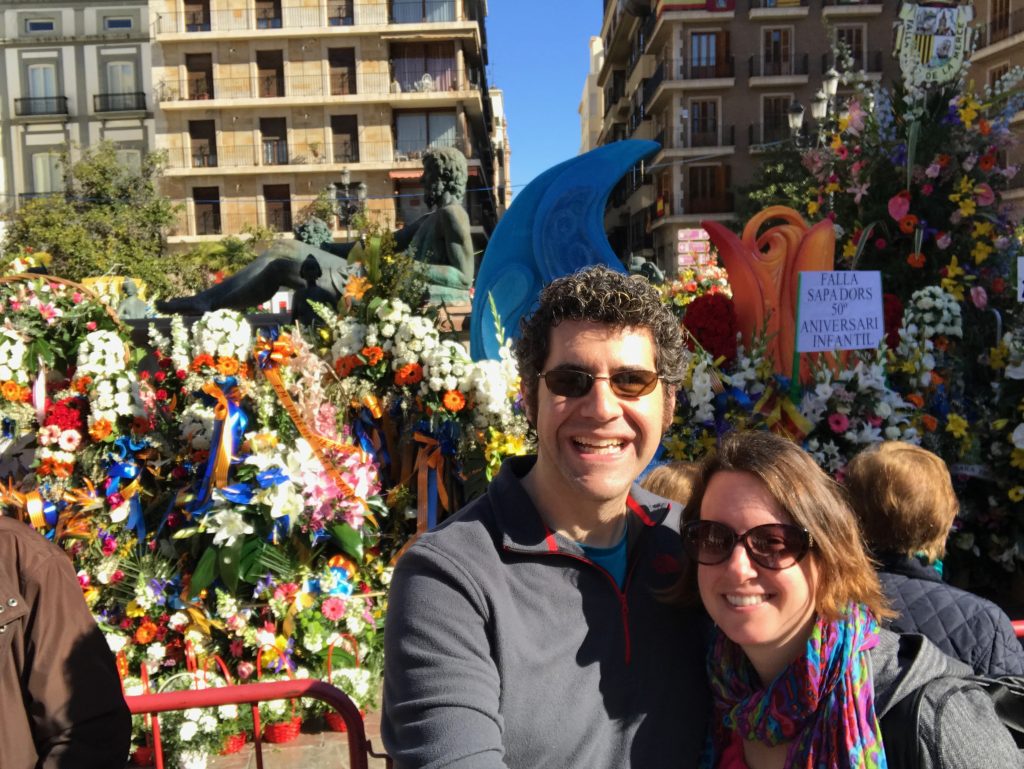 Many parades accompany the Fallas celebration, both formal and impromptu. Sometimes it seems like you can’t go anywhere in the city of Valencia during Fallas week without running into a panoply of costumed marchers and musicians.

Each individual march doesn’t always seem to be a big deal for the participants. Really, sometimes people just seem to be getting from Point A to Point B, like anyone using the road.

There was no escaping it. The festive fanfare was never far away, and it frequently interrupted us during our Valencian walking tour, while we were trying to take a break from las Fallas. At least it was an interesting distraction.

One of the biggest and most important processions involves a whole lot of flowers.

For two days, all of the Fallas groups in Valencia take turns bringing blooms to the Plaza de la Virgen. These floral offerings, and the cavalcade of falleras that bear them, make up the Ofrenda. We were lucky enough to see the plaza early on the second day, before the massive crowds arrived. 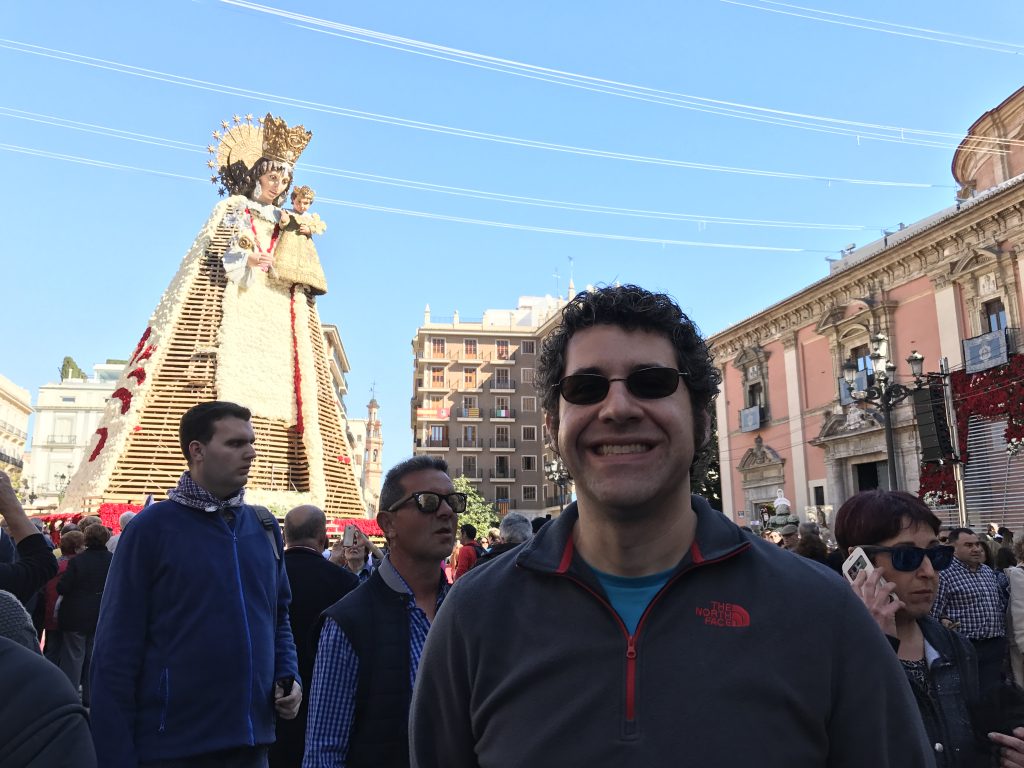 The Ofrenda honors the Virgen de los Desamparados – Our Lady of the Forsaken. 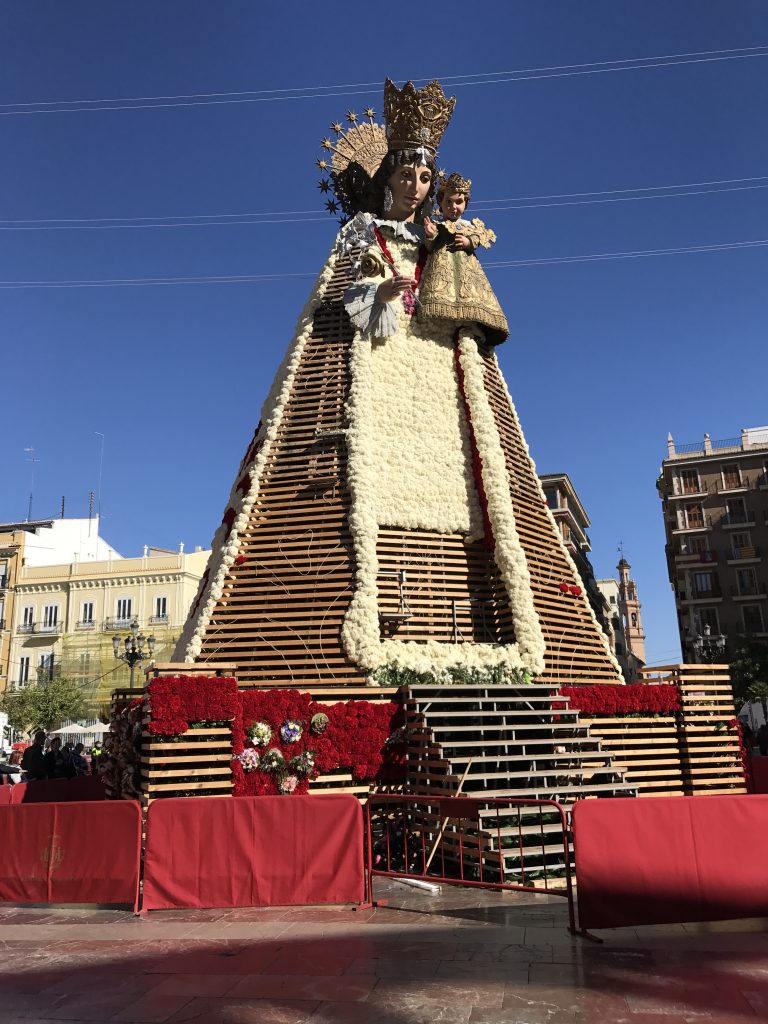 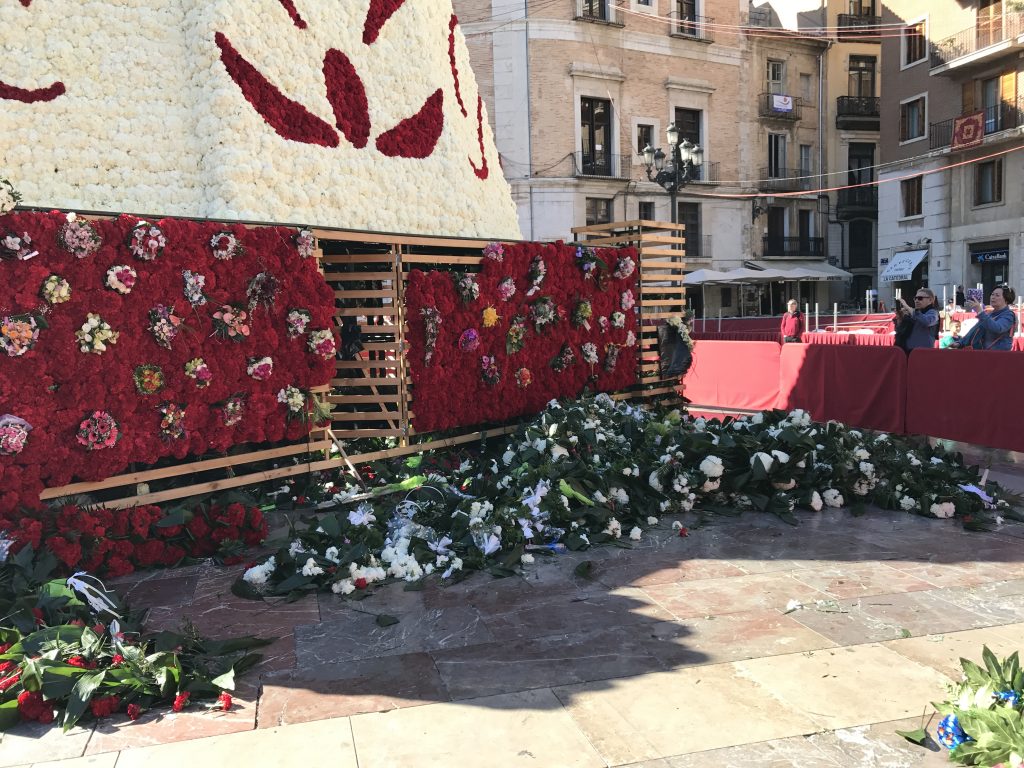 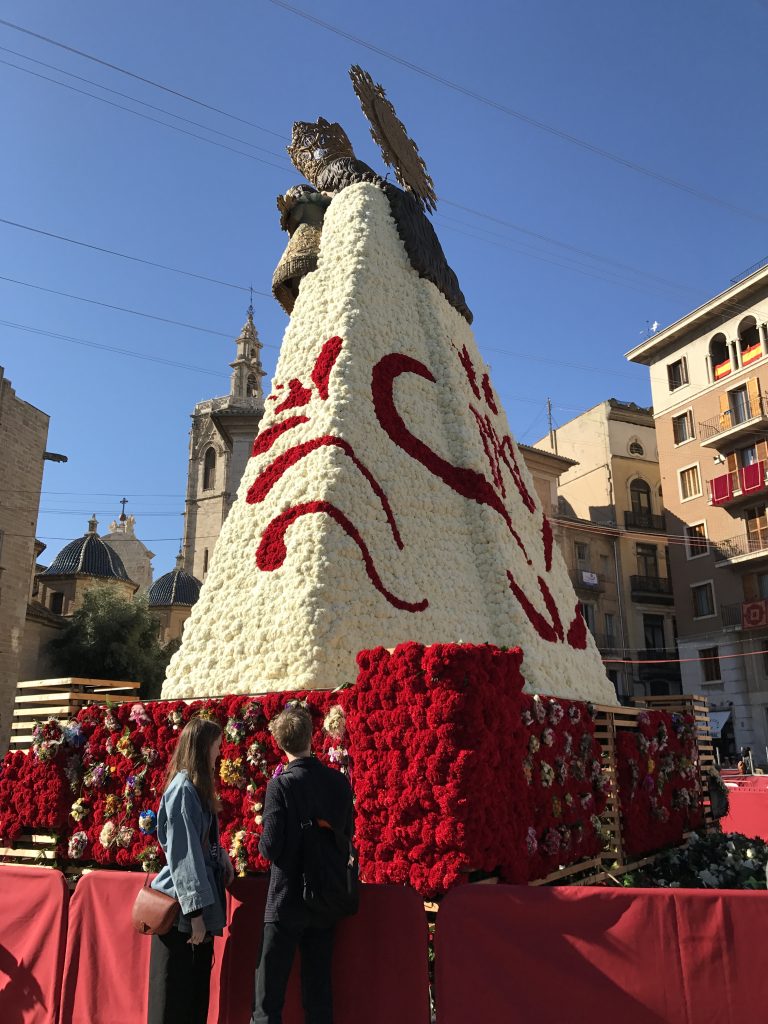 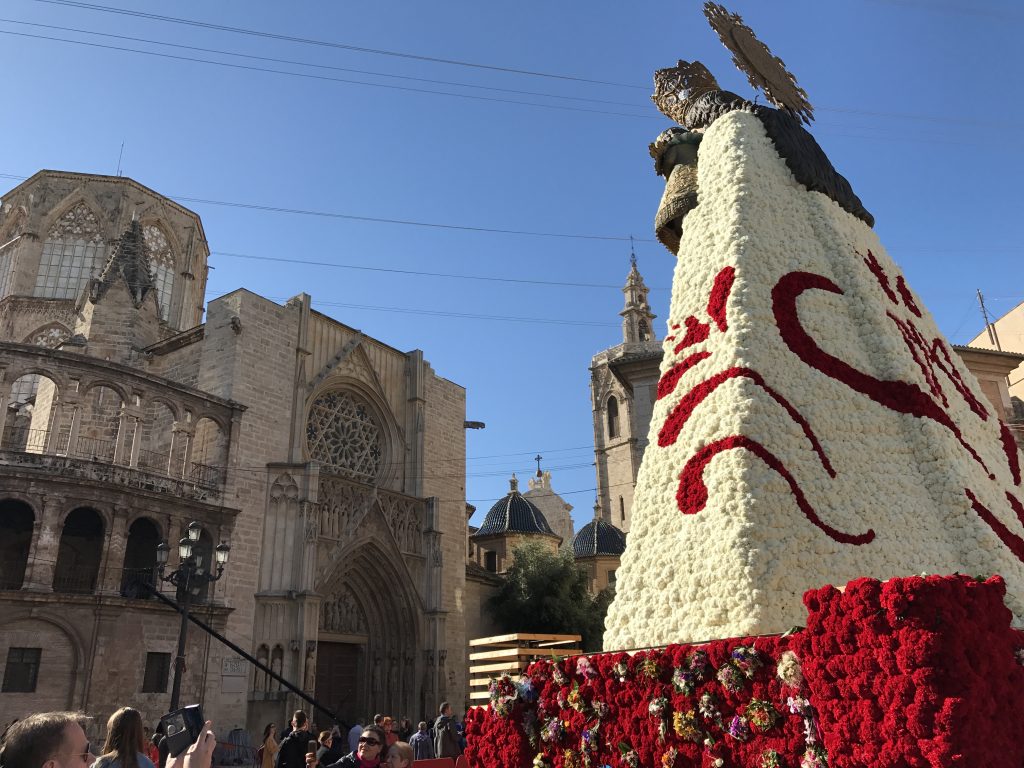 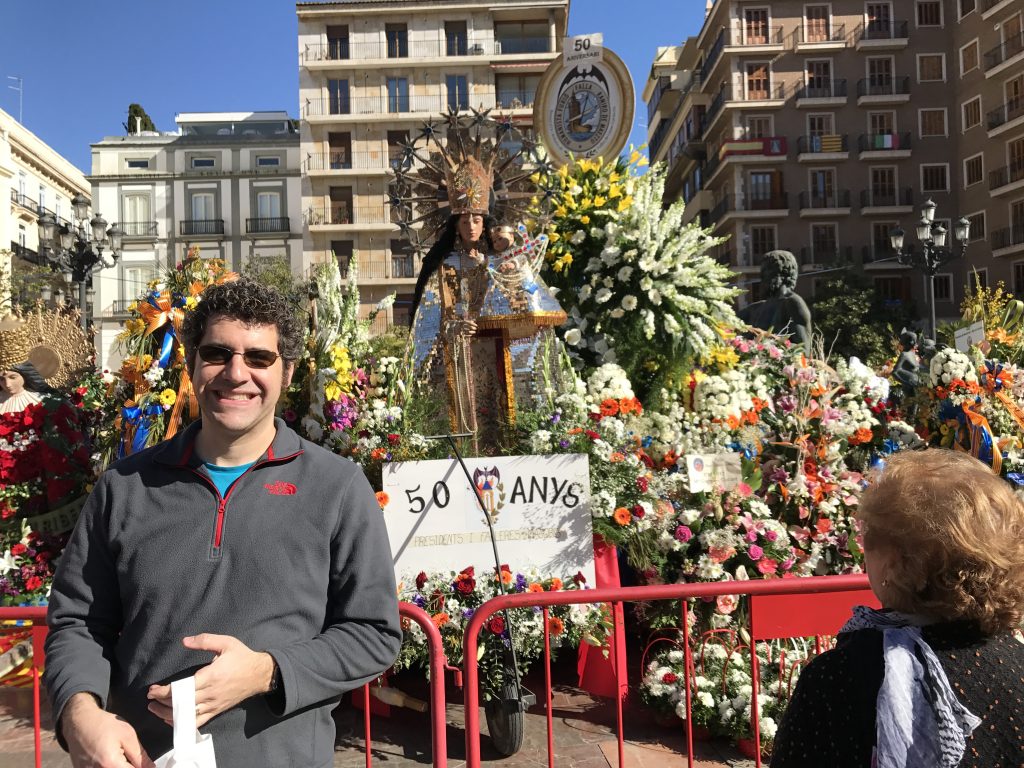 Later, we discovered how all of those flowers arrive at the plaza – surprise, it’s a parade! Didn’t see that one coming, did ‘ya? 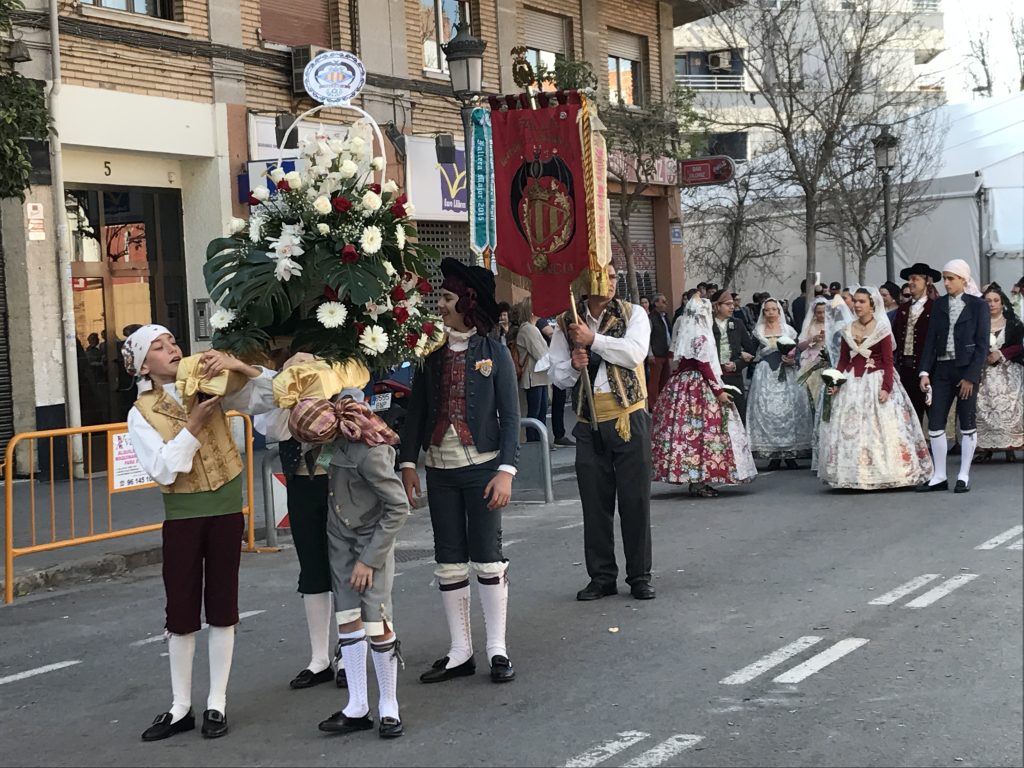 As we ate lunch at an outdoor table, we watched one falla after another en route to the plaza with flowers . . .

And we ran into even more groups, again and again, as we made our way back to the Ofrenda after eating.

There were considerably more people in the plaza later that afternoon. 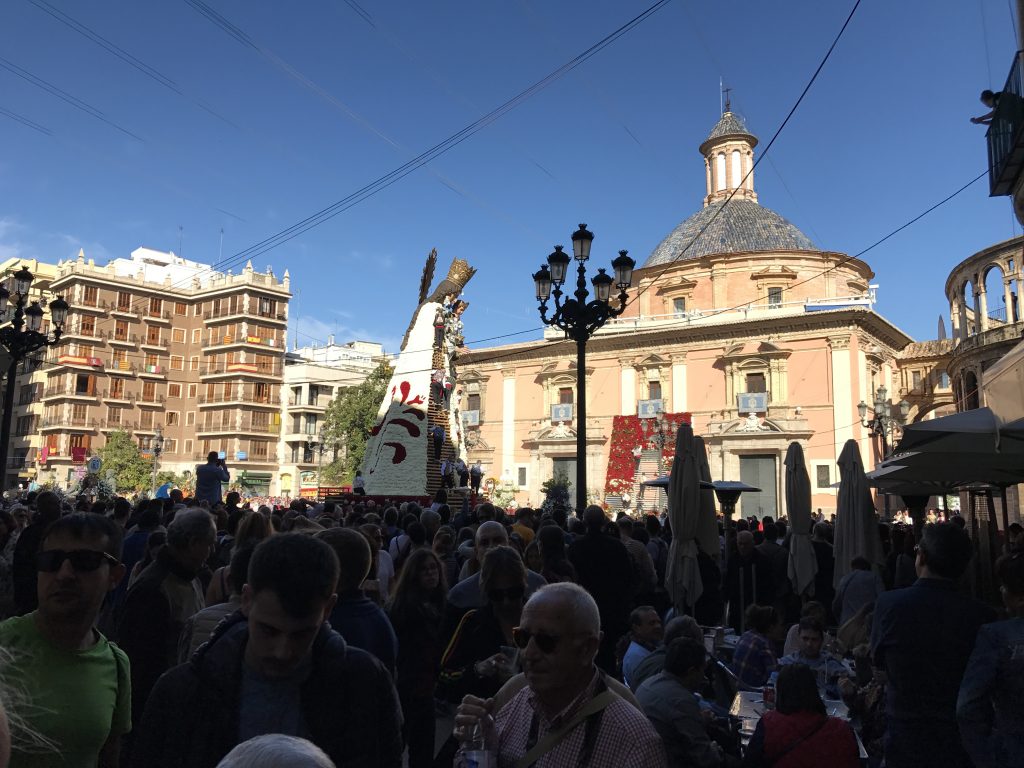 It was fascinating to see how the blossoms were added to the figure of the Virgen.

A giant floral wall was also taking shape on the basilica.

And when we left the plaza, the fallas were still coming with more flowers. 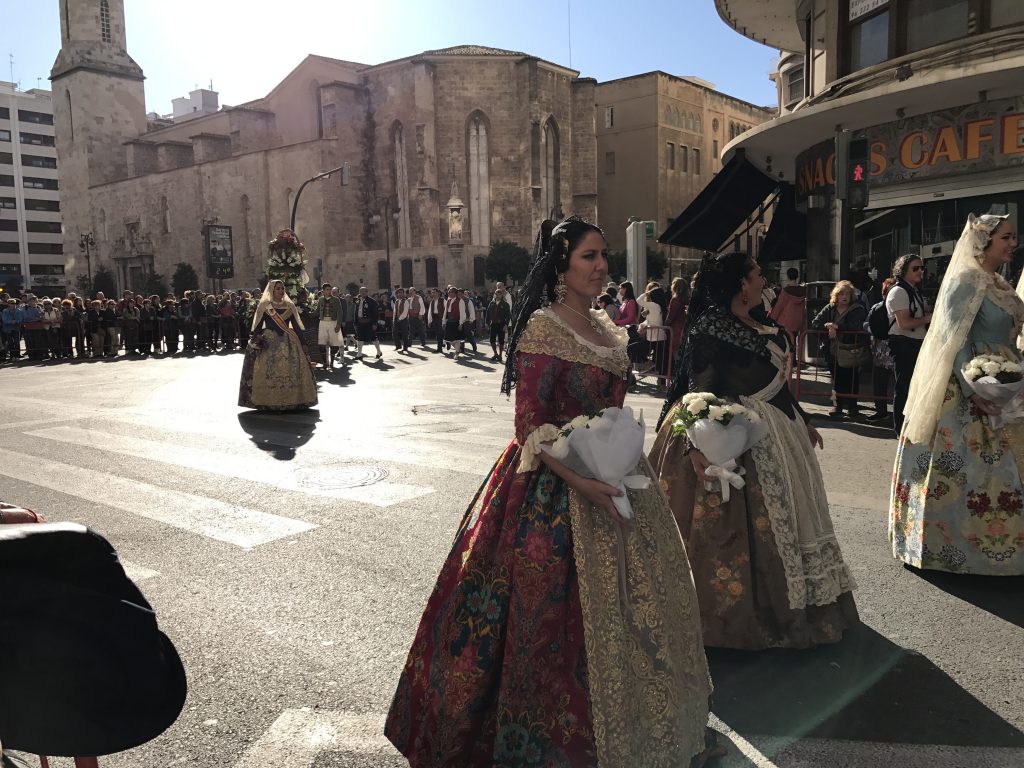 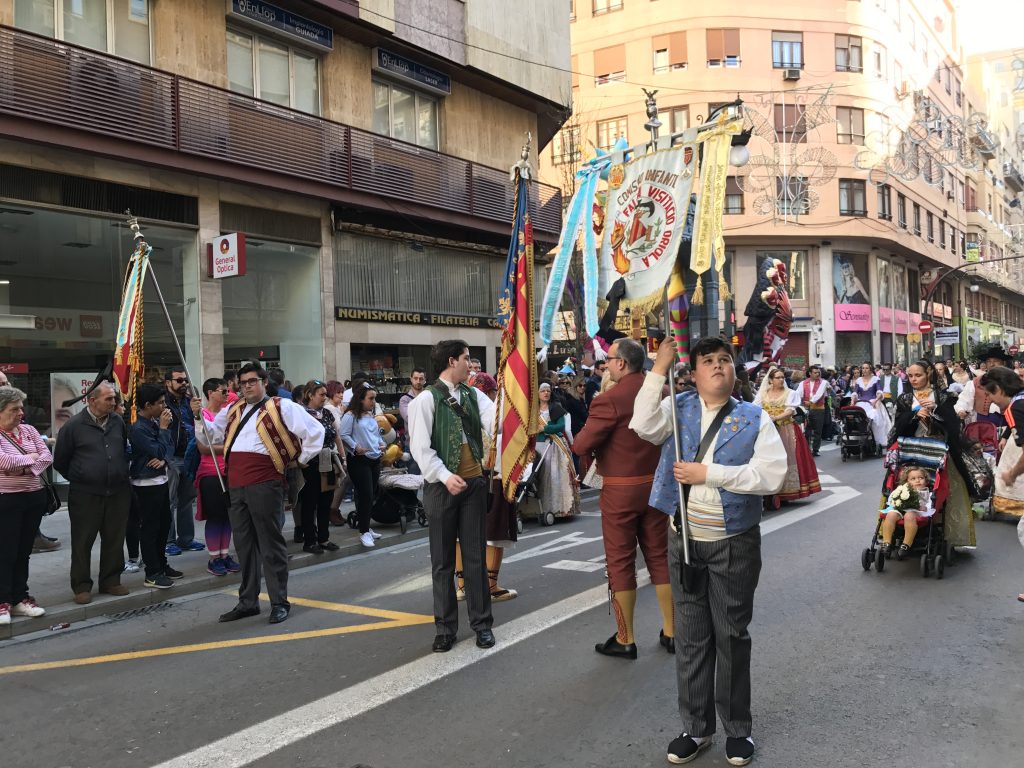 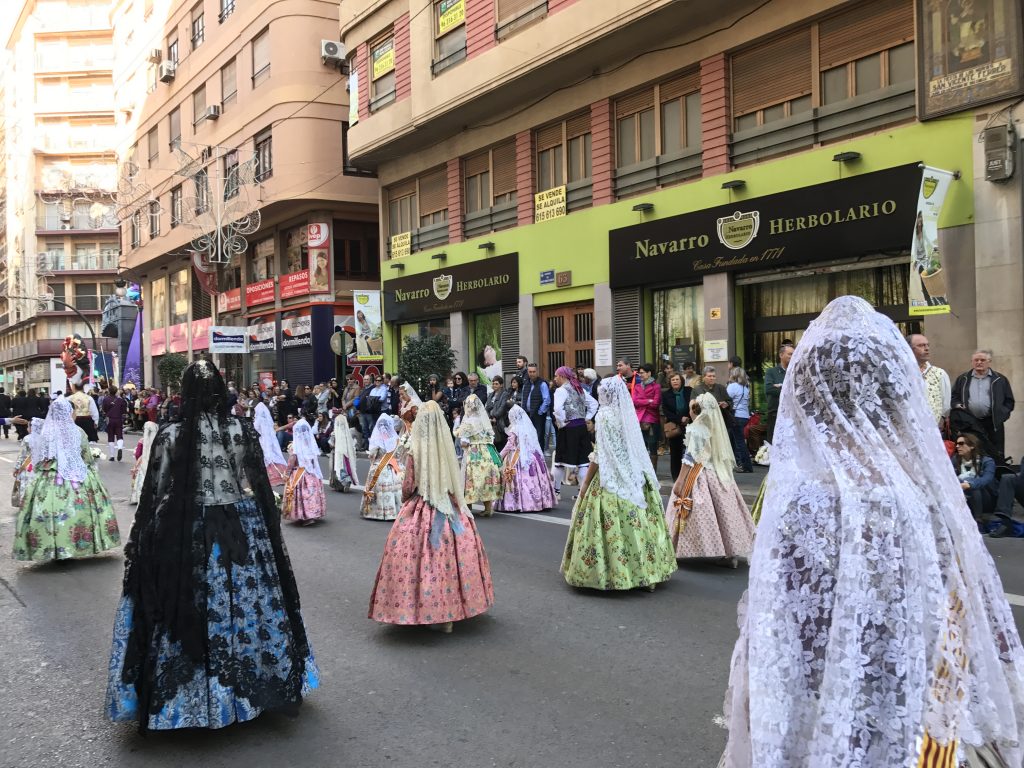 Of course, Doer & Dreamer are no newcomers to the Valencian parade scene. As citizens of Burriana, we’ve experienced our fair share of promenades on a semi-regular basis. Yes, we’ve been seeing parades – Fallas-related and otherwise – for months. Naturally, our city did not disappoint during the big weeklong Fallas celebration. 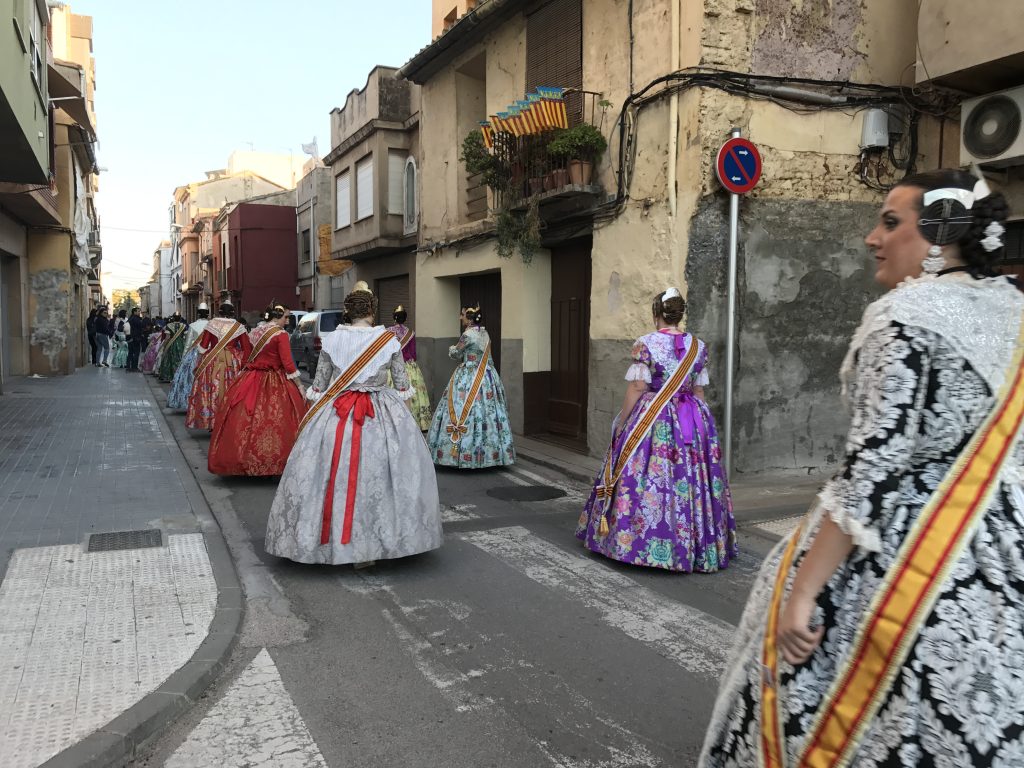 Not surprisingly, Dad, Deb, and Dreamer ran into one on their way back from the beach and the Clot. At first, as one falla after another marched down the street, these American observers weren’t sure why the Burrianenses were parading yet again. 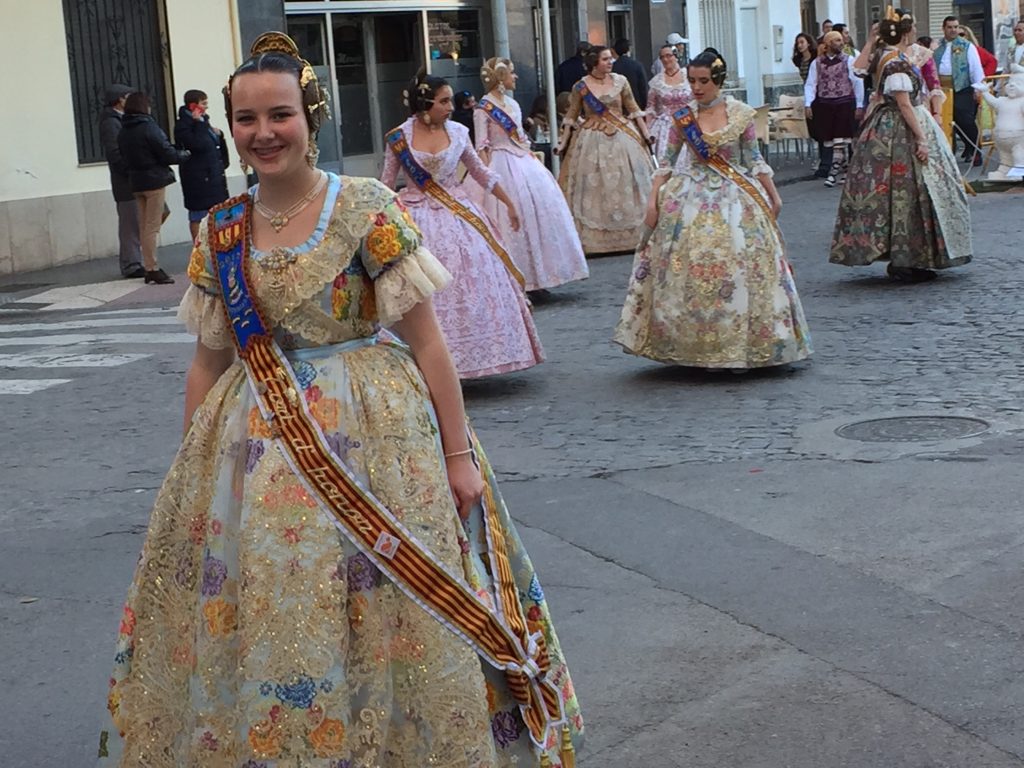 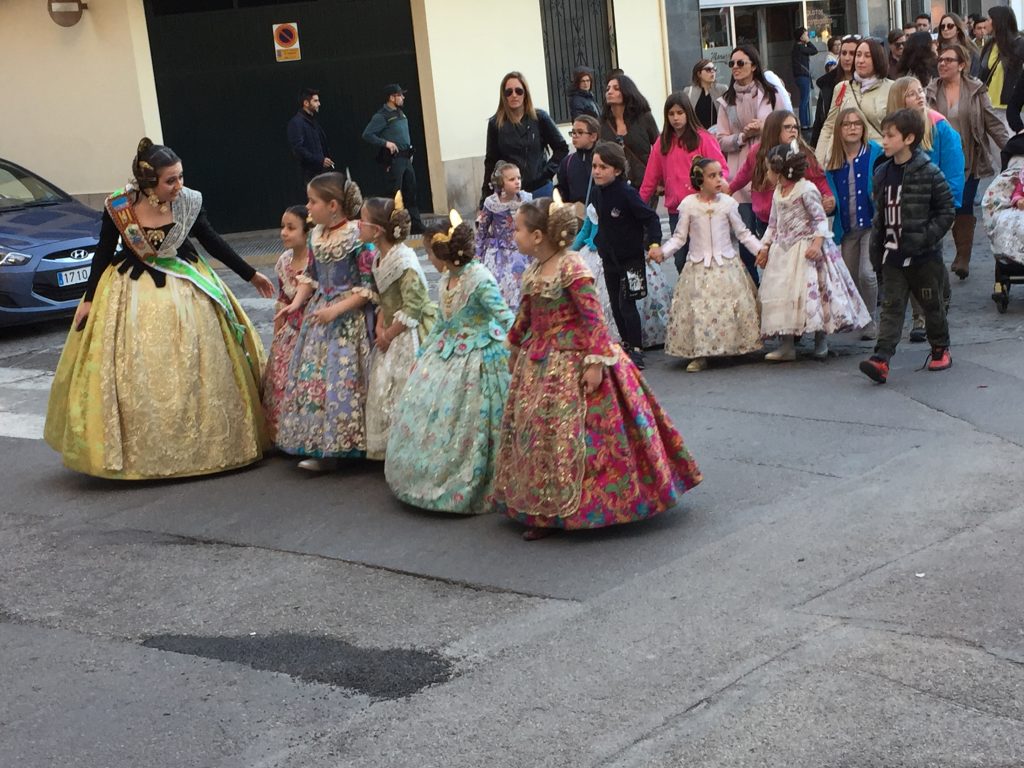 Dreamer was excited to recognize some of her fallera students, though.

Some of the falleras sustained themselves with churros during their long walk.

Finally, we saw what all the fuss was about – the Reina Fallera, or Fallas Queen, was on her way to the city hall! 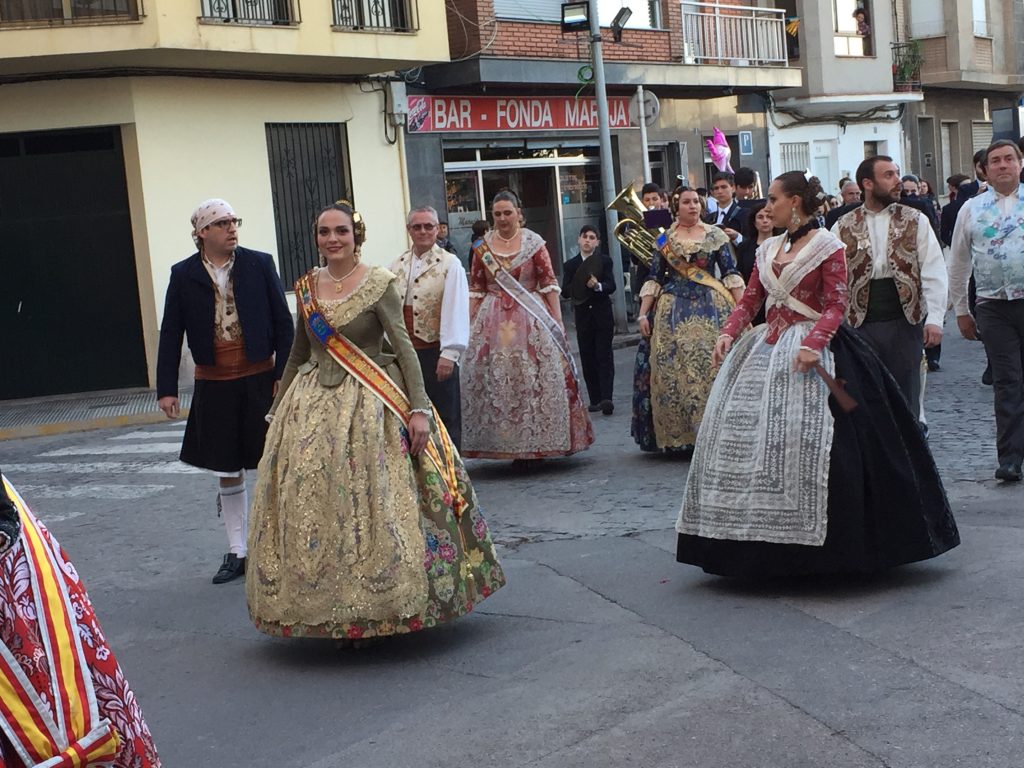 The sun had set by the time we finally reached city hall, or the ayuntamiento, and the fallera groups continued to arrive. There was traditional Valencian music, of course.

Dreamer recognized more of her students.

And the littlest falleras couldn’t help but dance. 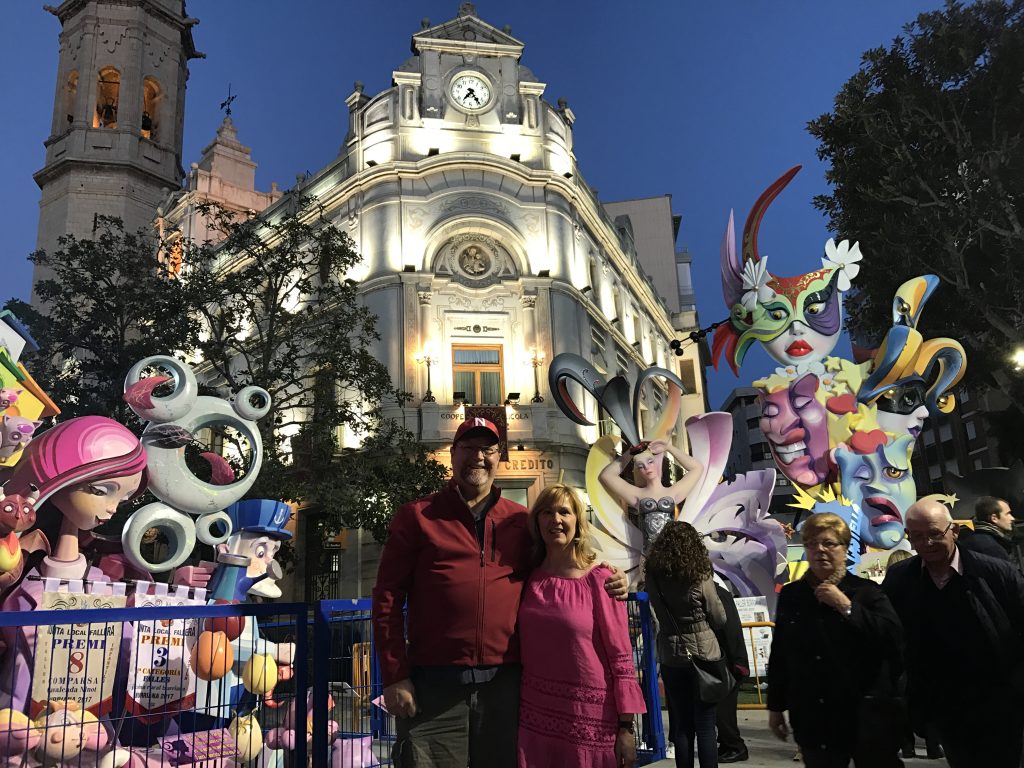 Until finally, the queen reached the square.

On Sunday we woke up to see Burriana’s version of the Ofrenda parade beginning below us, right in front of our building.

It was like the ritual we had seen in Valencia, but on a smaller scale. Of course, the queen was a major player in this particular promenade. 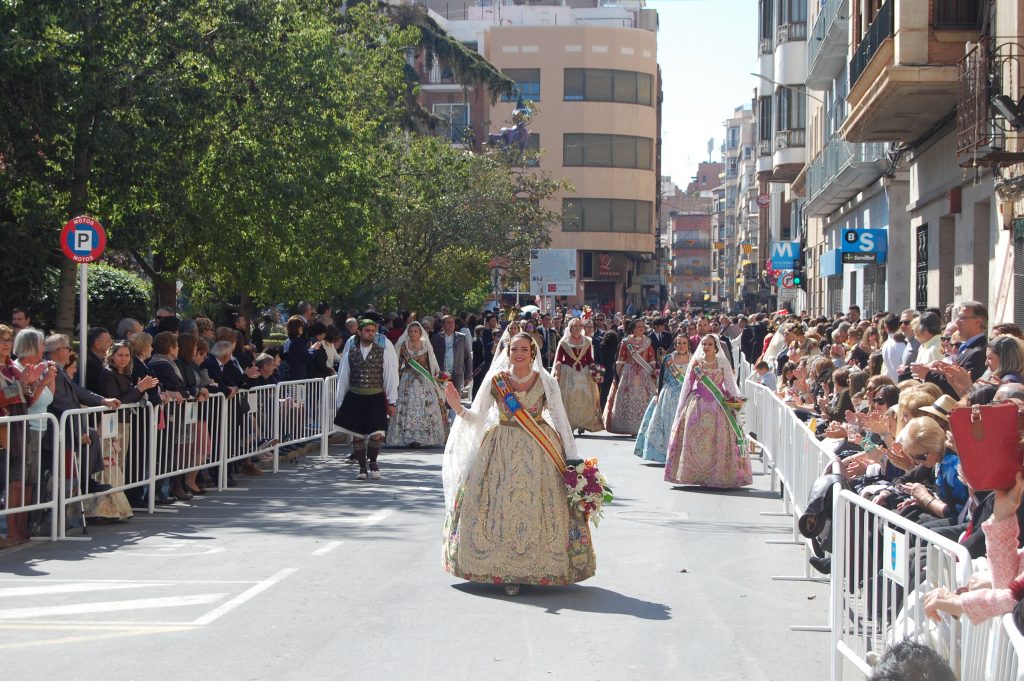 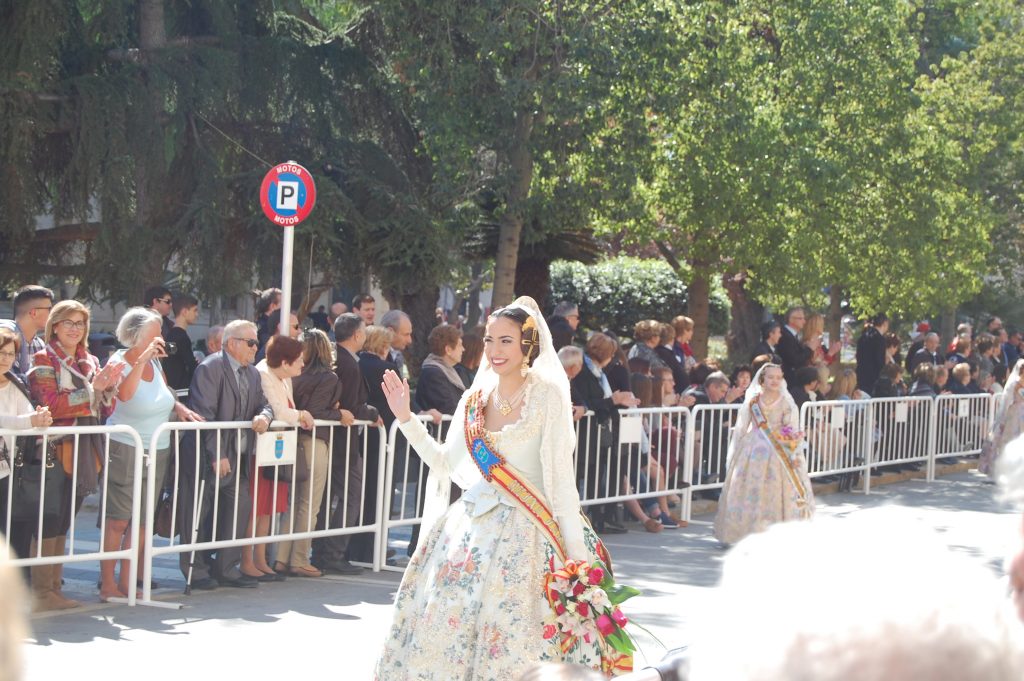 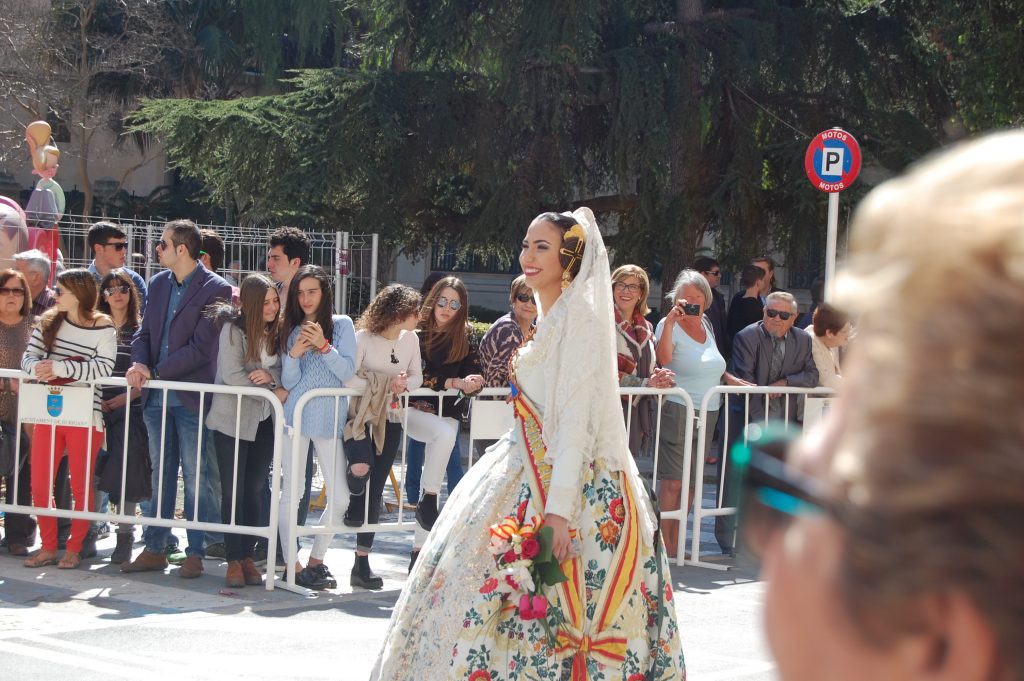 Burriana might not have had a towering floral Virgen, but their Ofrenda was still something to behold. 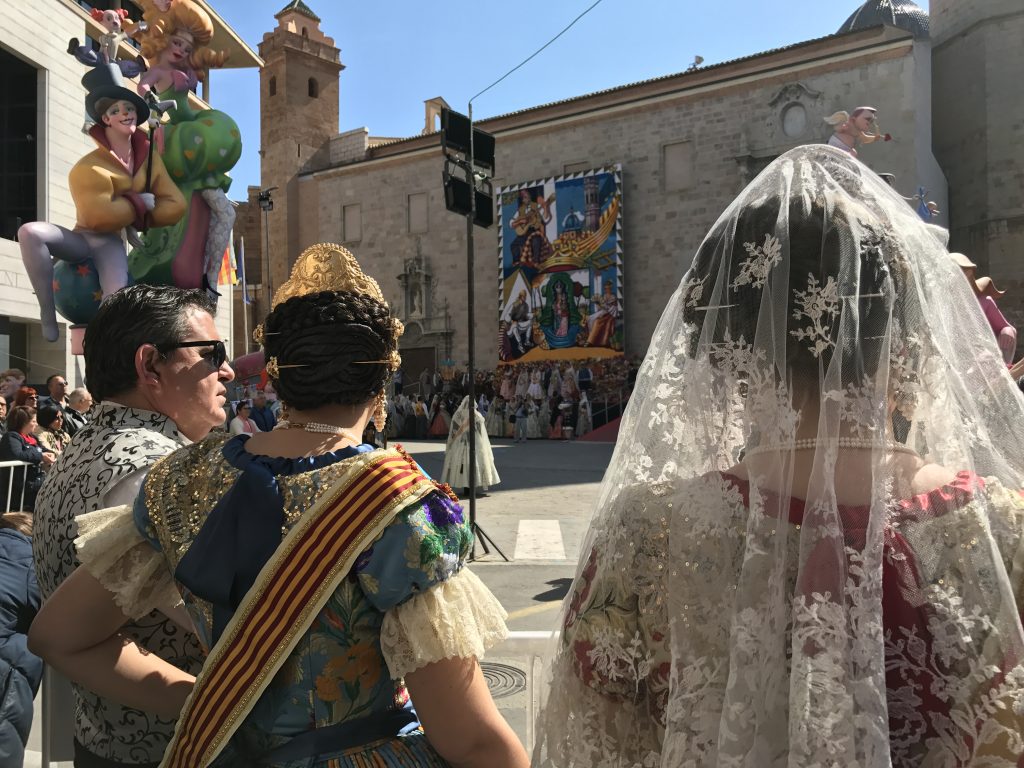 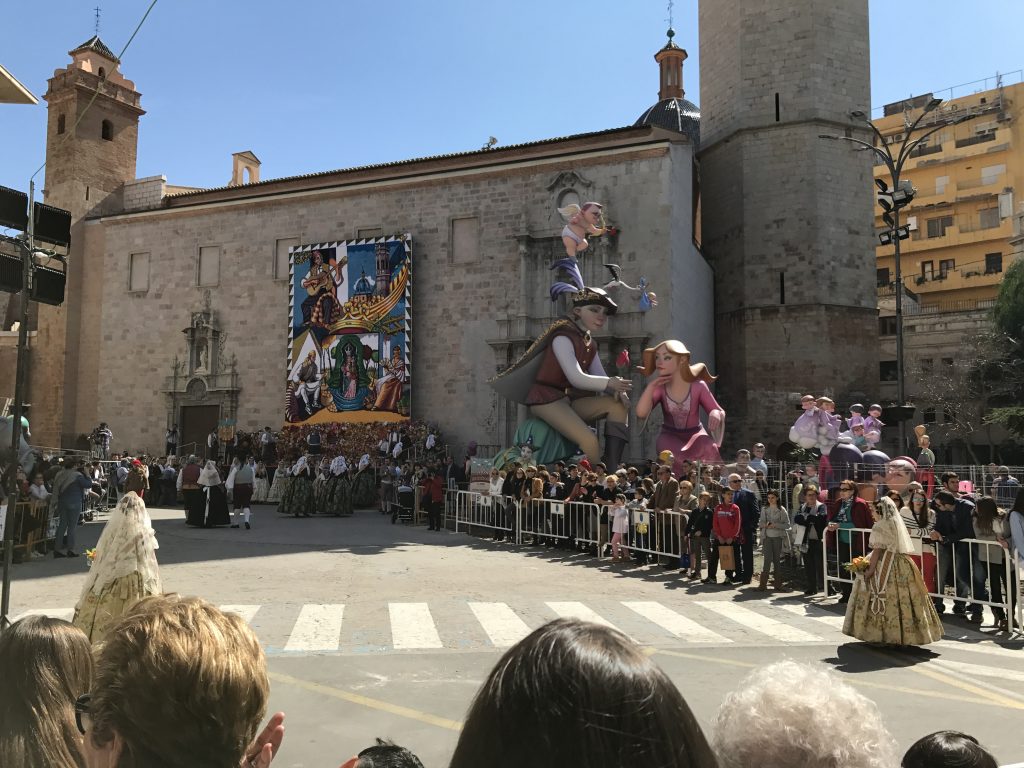 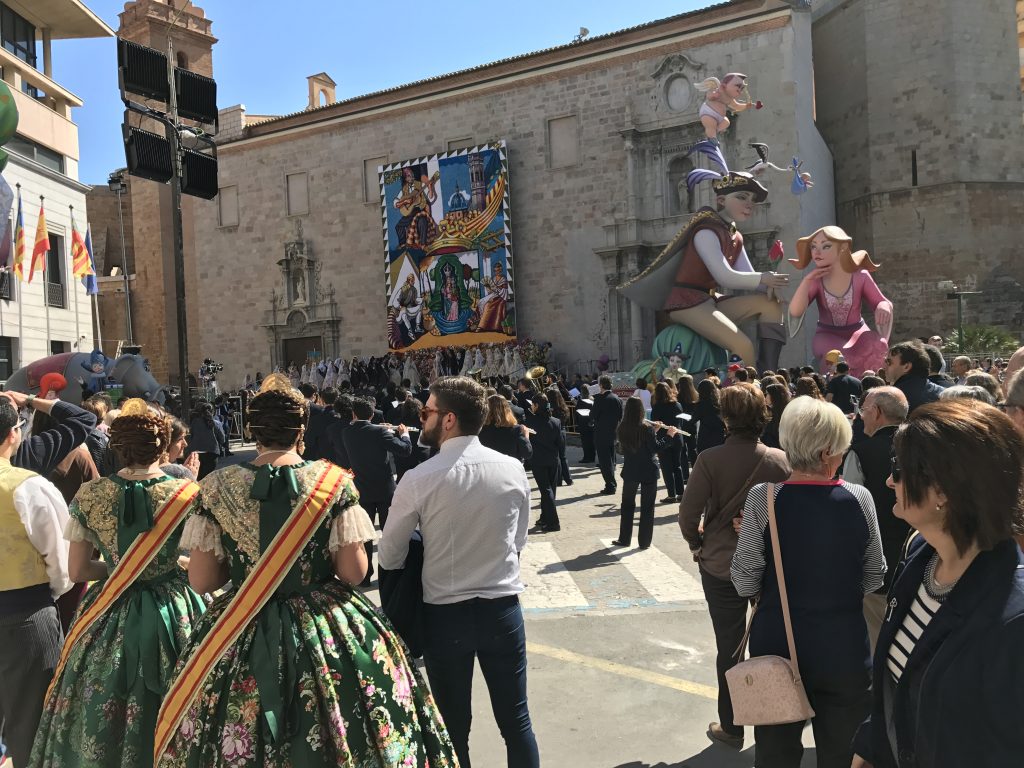 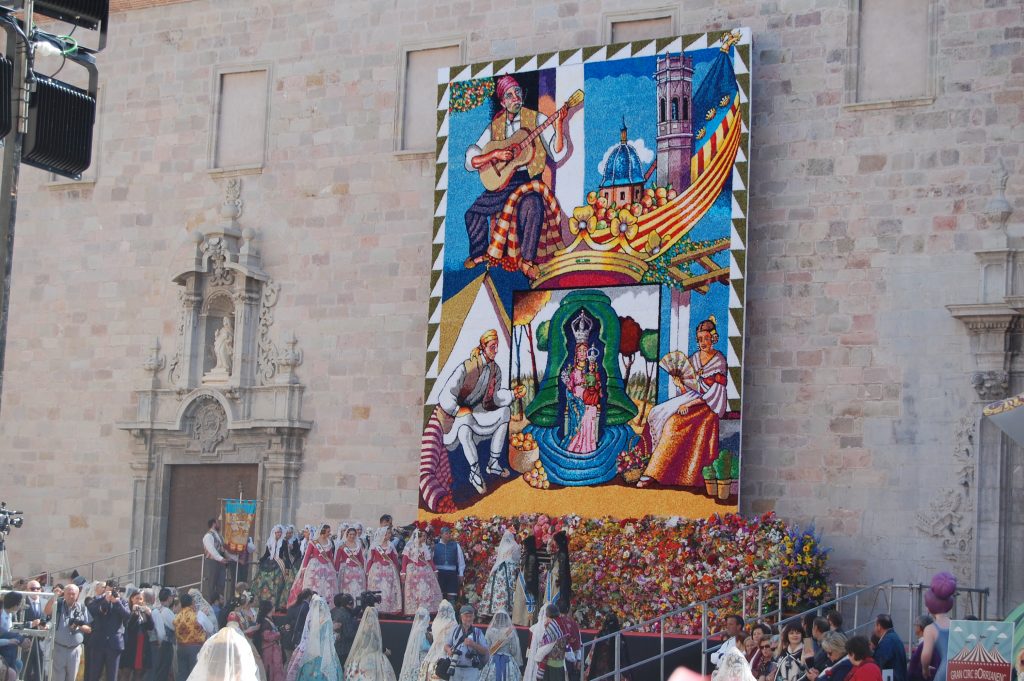