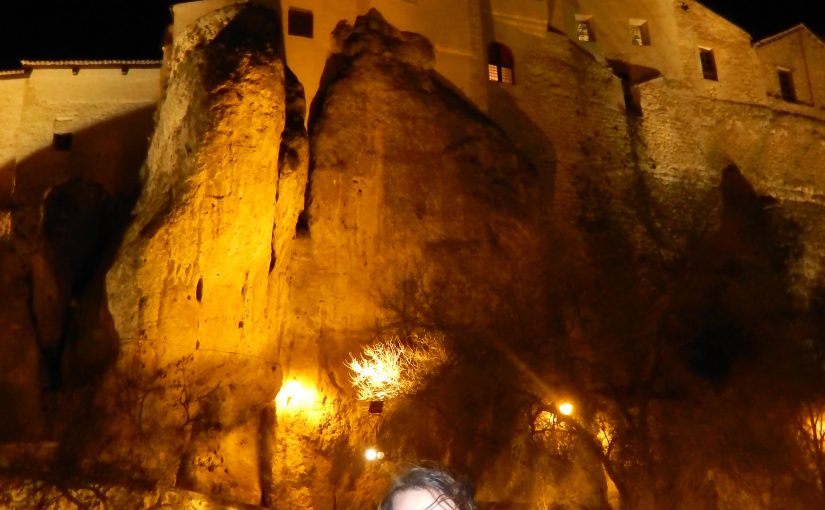 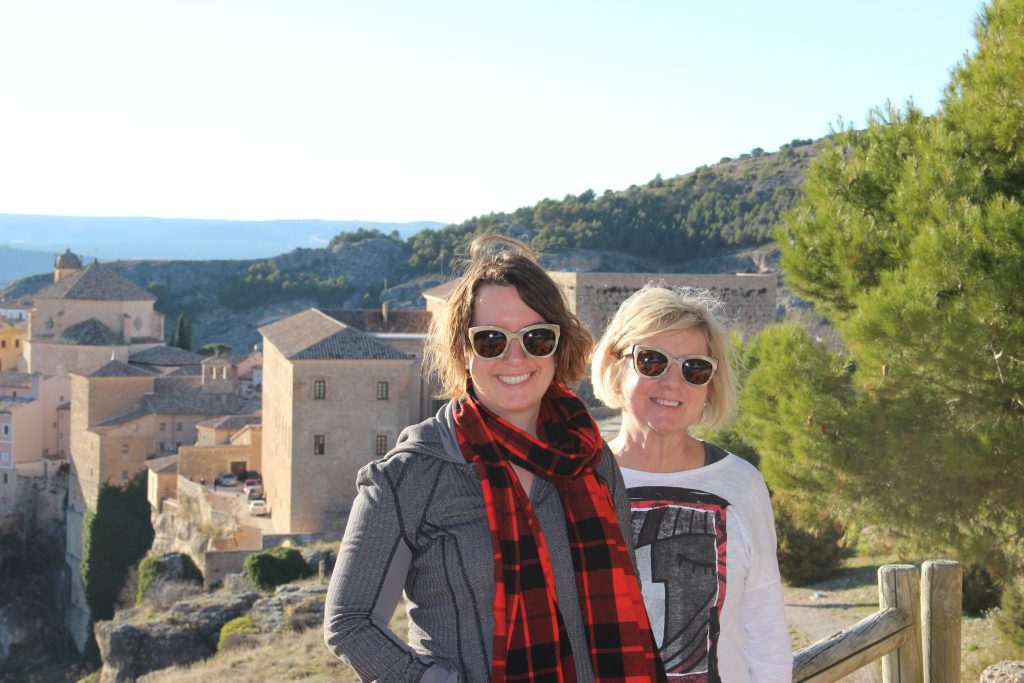 We’ve been fans of Spain’s high-speed rail network, the AVE, since the first time we traveled on one of the trains last fall. After deciding to spend New Year’s Eve with my mom and Jim in Madrid, it made sense to first spend a couple of days in Cuenca, which is an easy stop between Valencia and the capital. 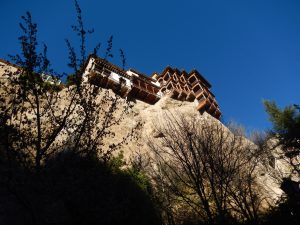 Cuenca is most famous for its Casas Colgadas (Hanging Houses), which date back to at least the 15th Century. Unlike uncle Rhino and aunt Saint, these houses were built this way and are in no danger of collapse! Once there were many such houses, but today only a few remain, jutting out over the Huécar River gorge. One of the houses now is home to the Spanish Abstract Art Museum. Most of the works there were created by artists in exile during the Franco regime. The city’s unique architecture has led to its designation as a UNESCO World Heritage site. 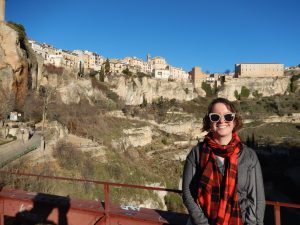 Some of the best views of the hanging houses can be seen from the Puente de San Pablo (Bridge of Saint Paul). The original bridge was built between 1533-1589, and later renovated in 1902 (supported by the remains of the old bridge). It’s a great place to view the city, the Casas Colgadas, and the surrounding nature. From pictures of the bridge you also might get a sense of how steep Cuenca is – the city actually descends into gorges of two rivers, the Huécar and the Júcar. 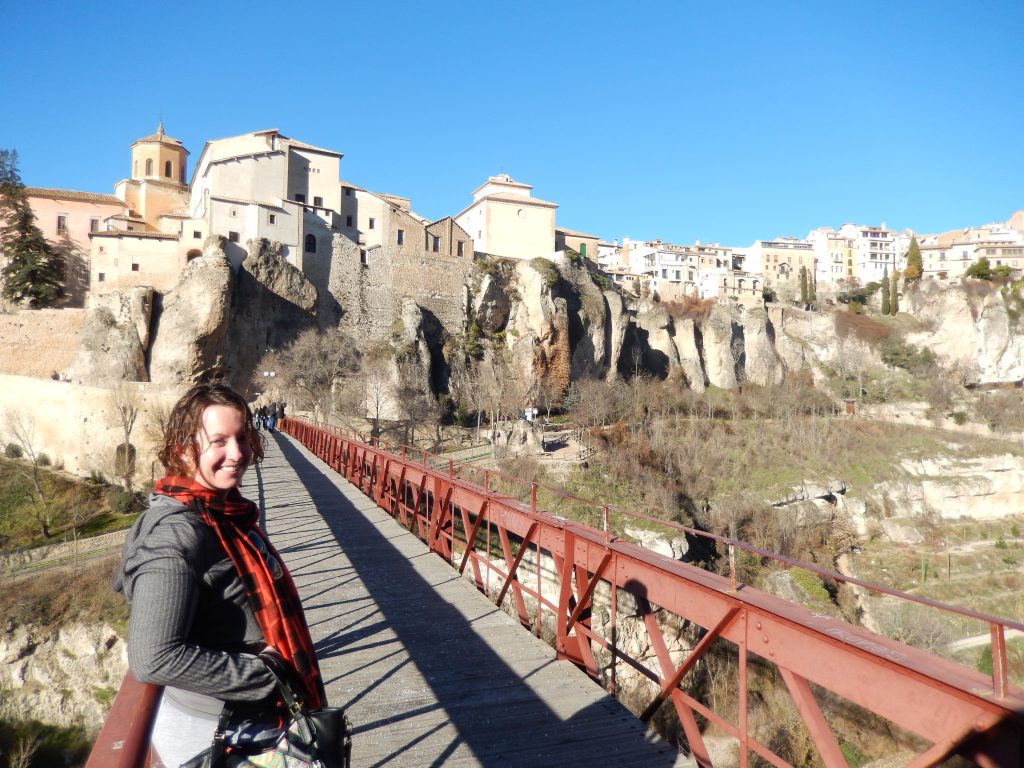 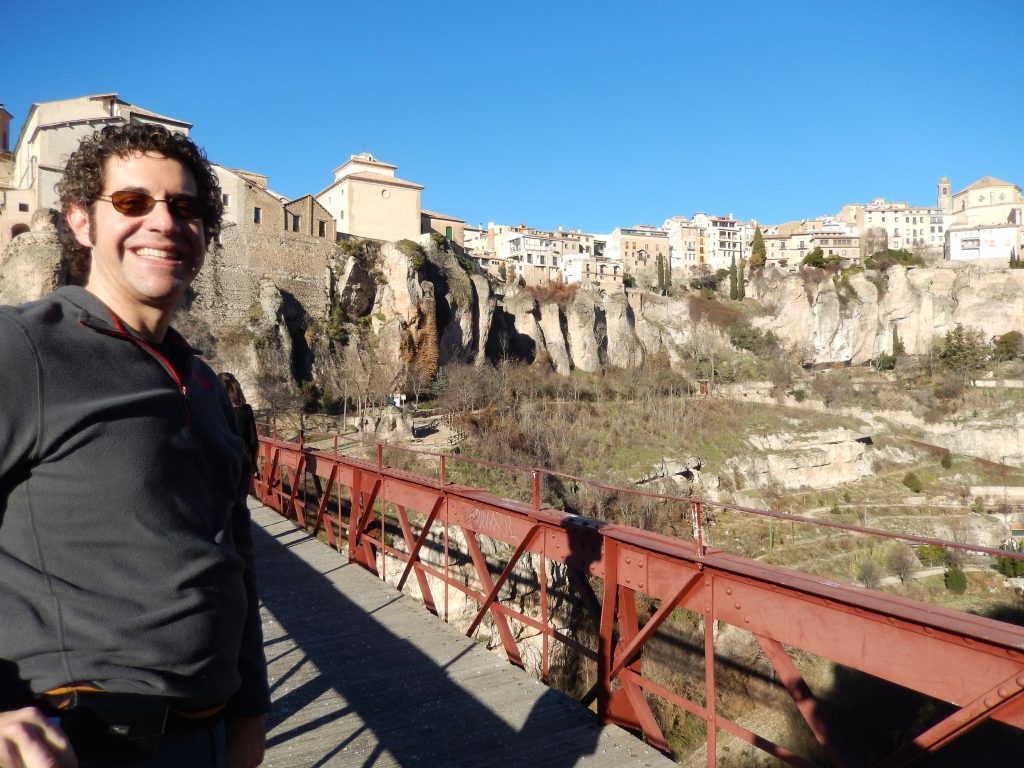 If you can’t tell from the photos, Cuenca is absolutely surrounded by trails – we saw signs touting the city as a flor de senderismo, literally “flower of hiking” but in English we’d say it’s a hiker’s paradise. During one of our hikes, we saw signs pointing to the convergence of the two rivers up ahead. “What a spectacular and breathtaking display of nature that must be,” we thought. Keep reading for that dramatic reveal. 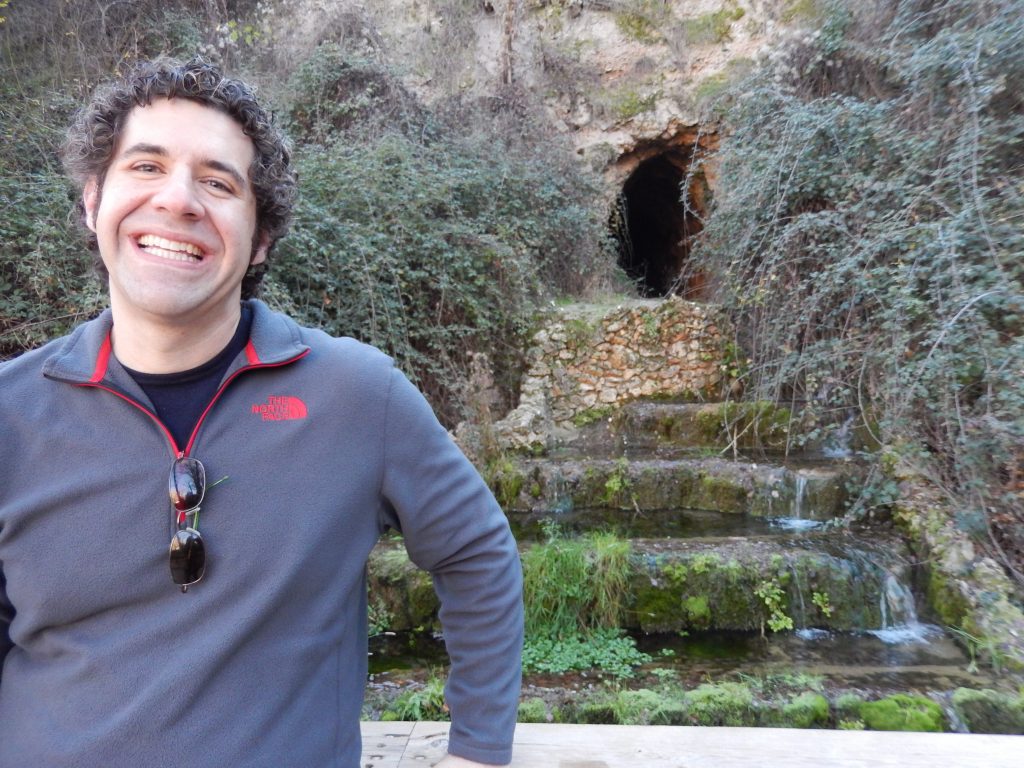 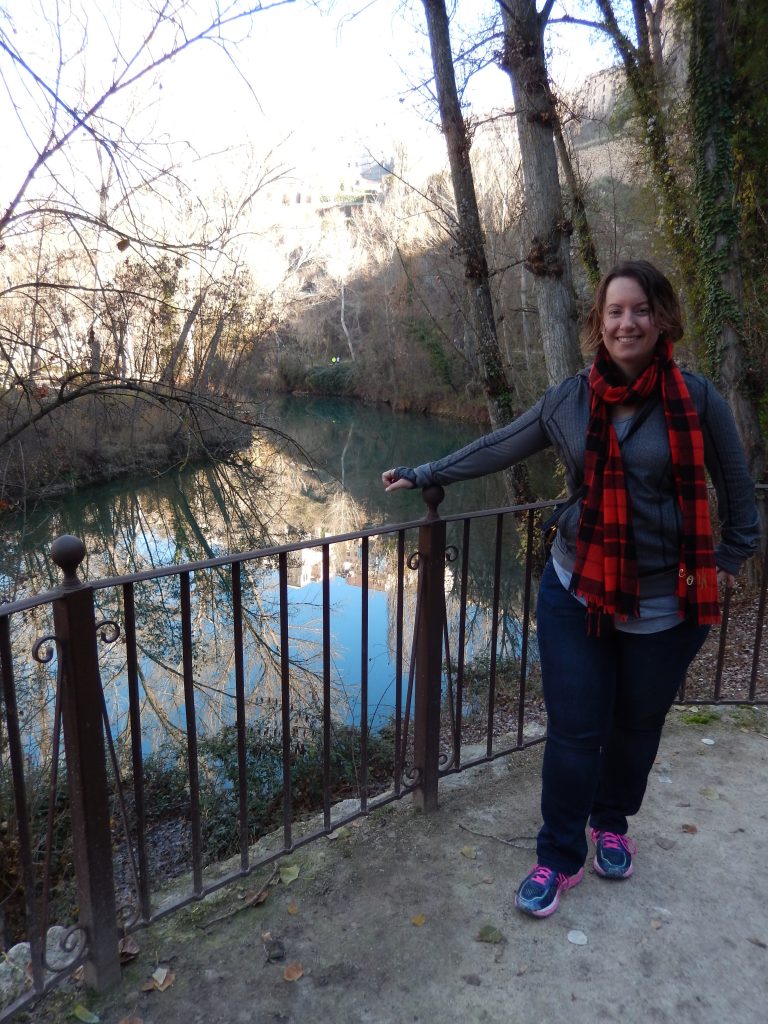 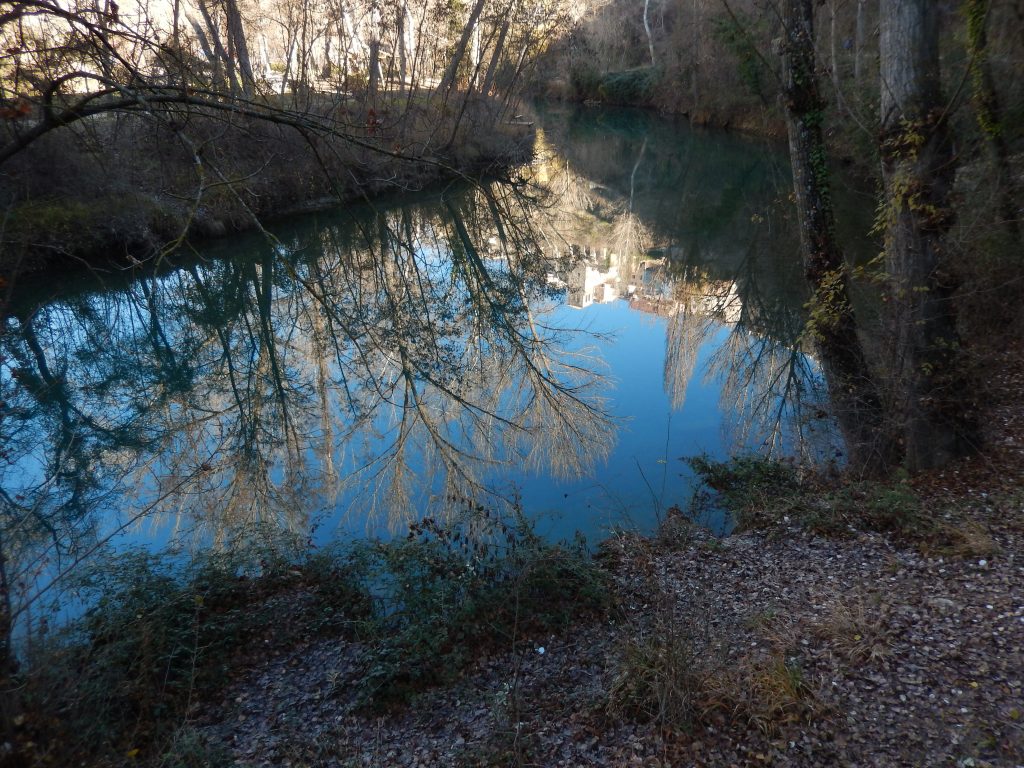 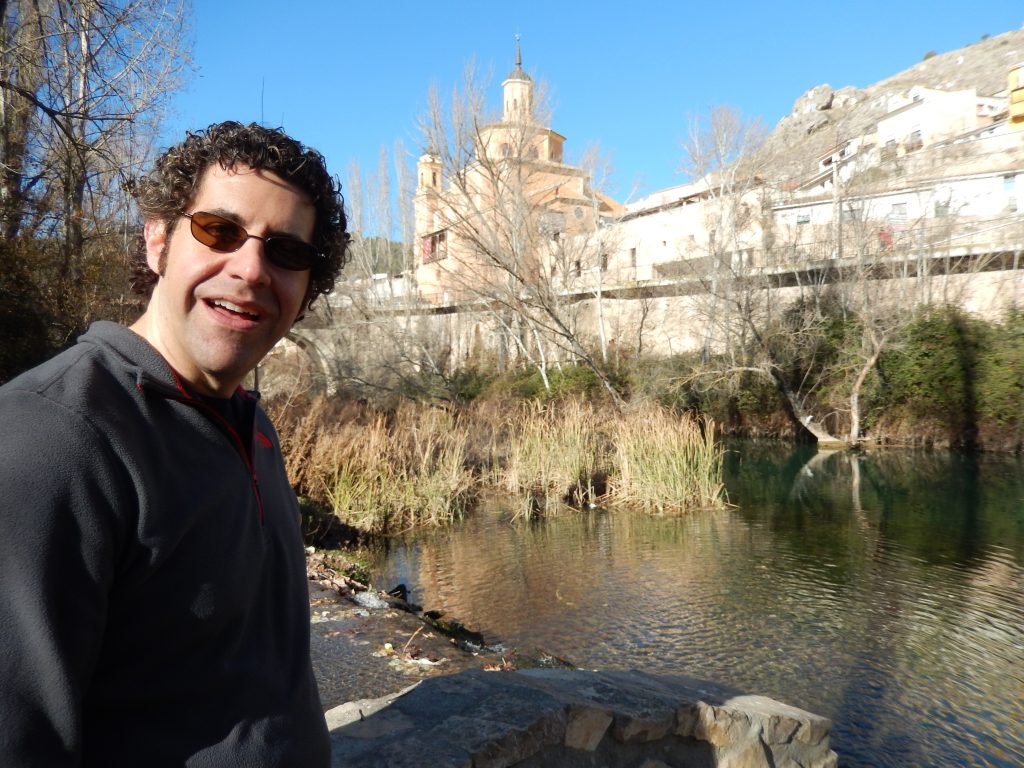 Is this like the sound of one hand clapping? 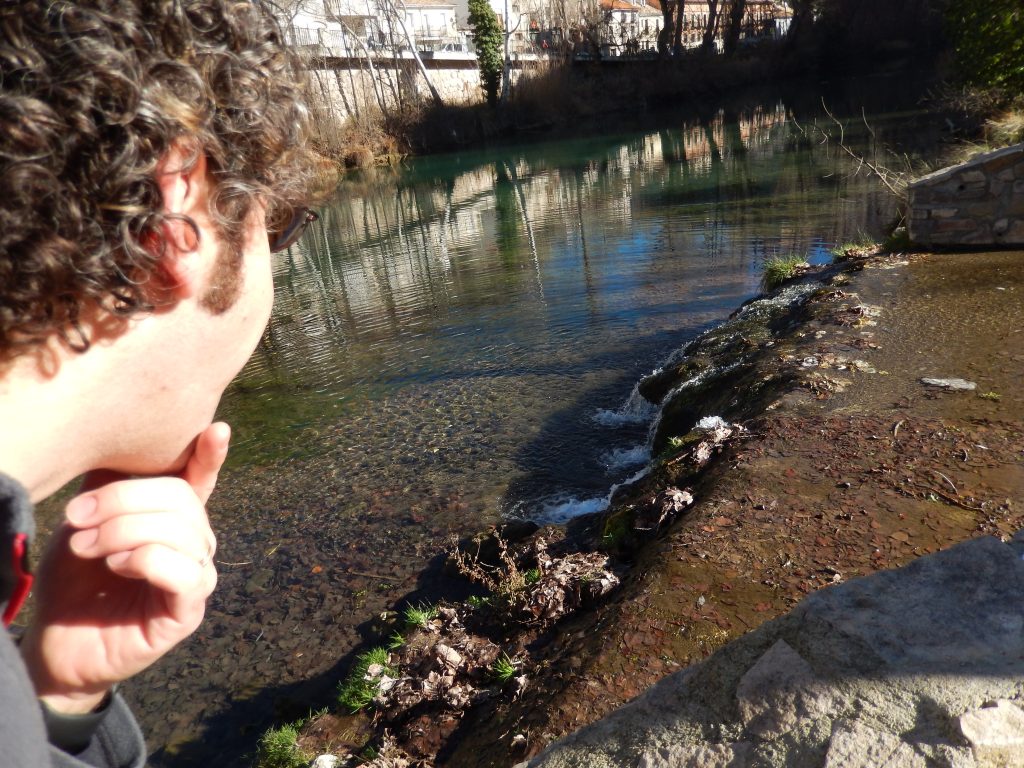 Sometimes, one is underwhelmed. 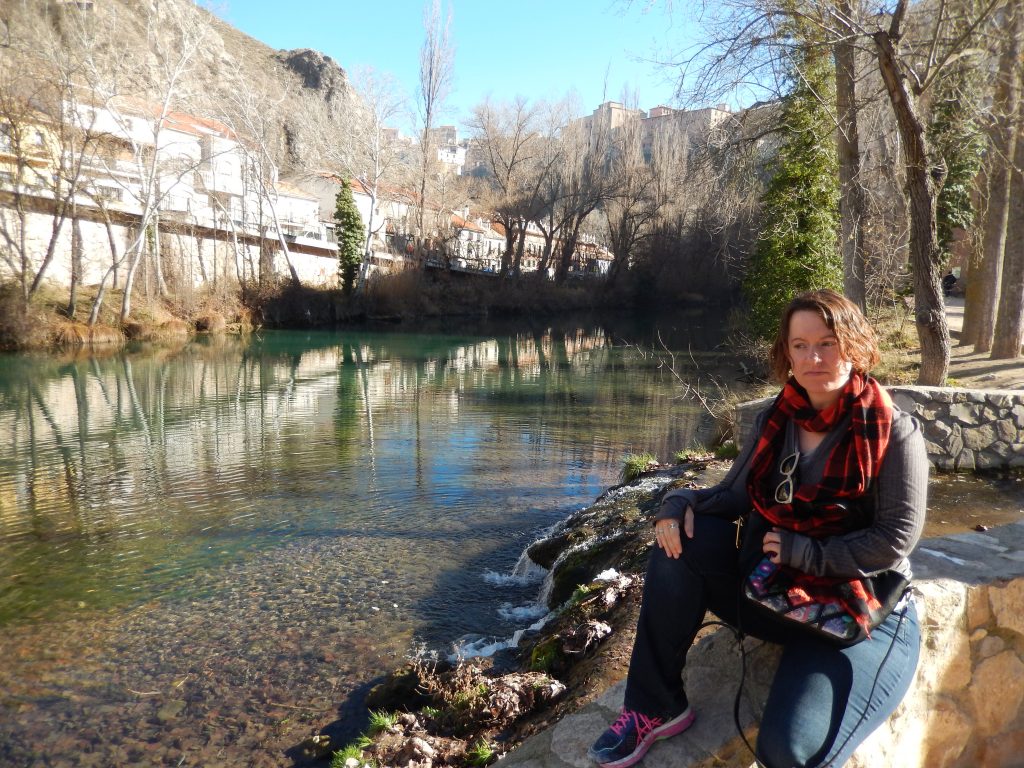 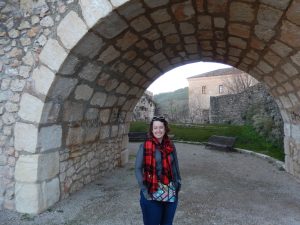 Despite the less than impressive river convergence, Cuenca really is a city surrounded by breathtaking vistas, especially when seen from high vantage points, like its castle. El Castillo was built after Muslim Arabs conquered the area around the year 714 and recognized the strategic value of such a lofty location. Today, it’s another fine spot for taking photos. 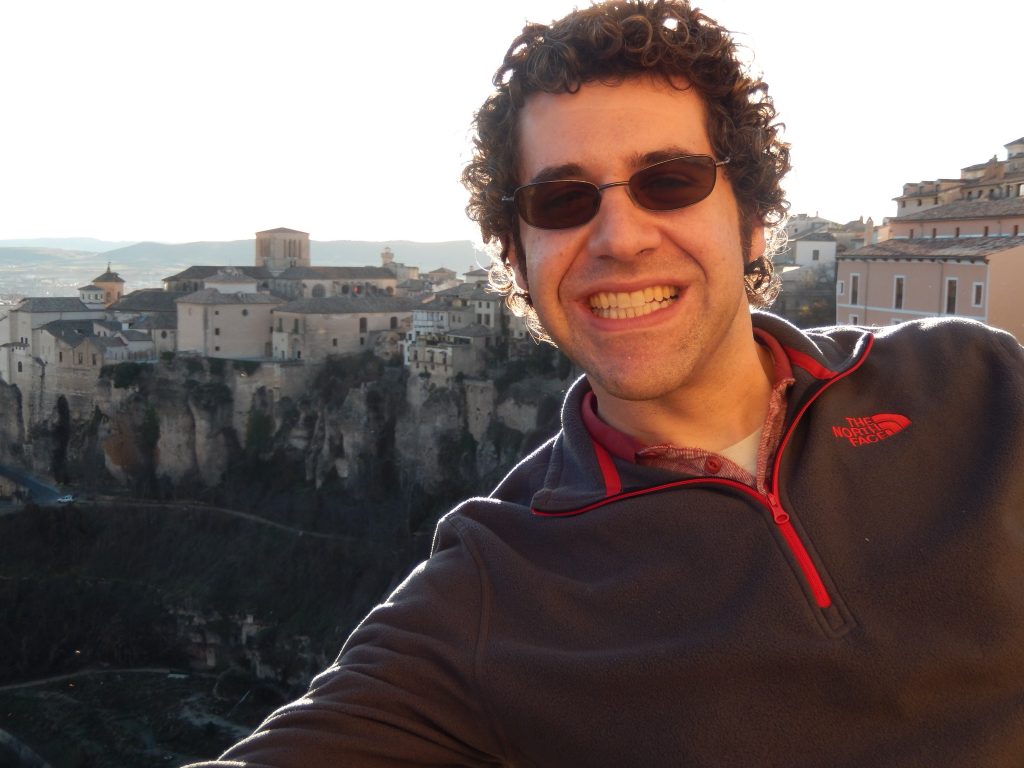 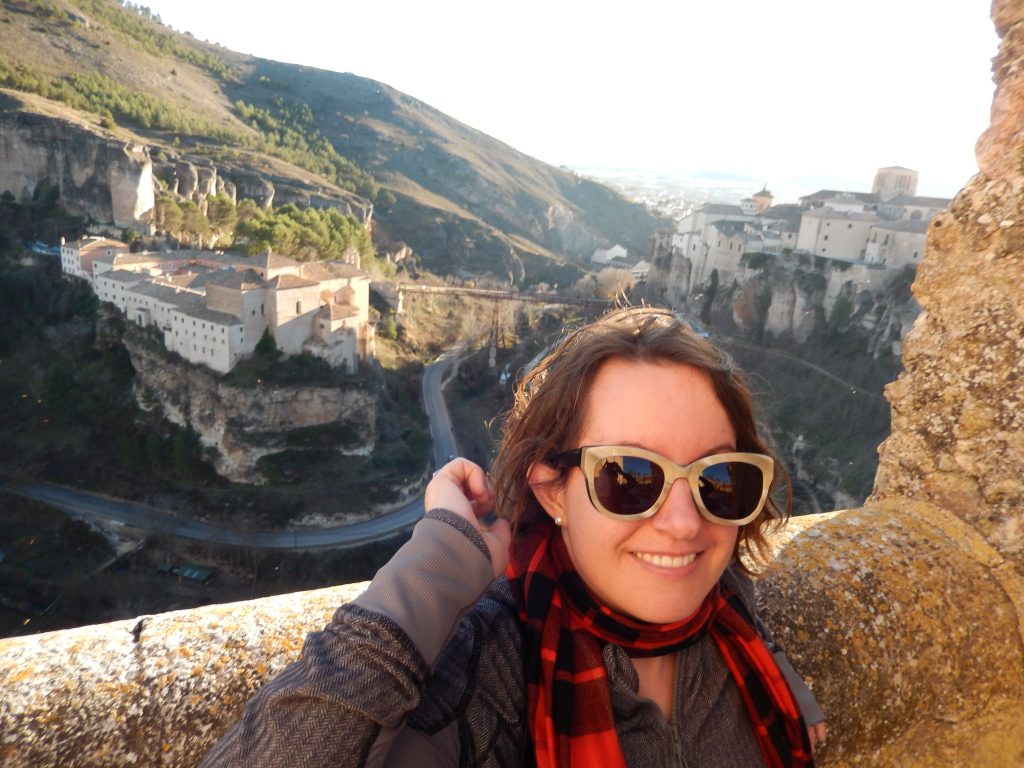 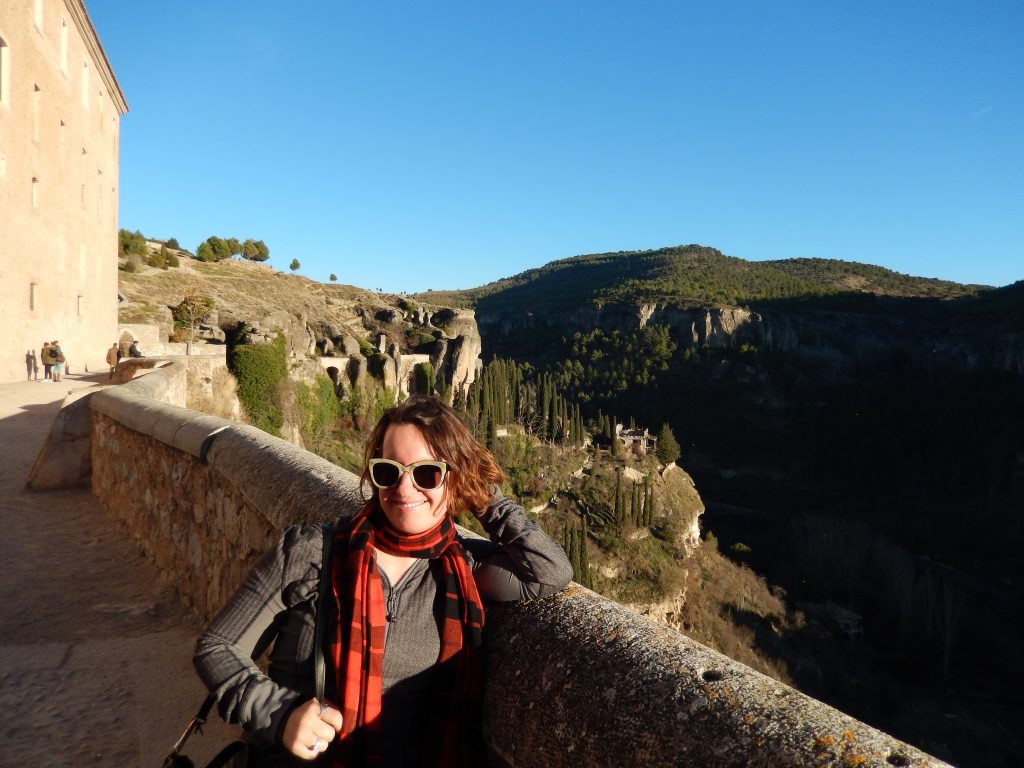 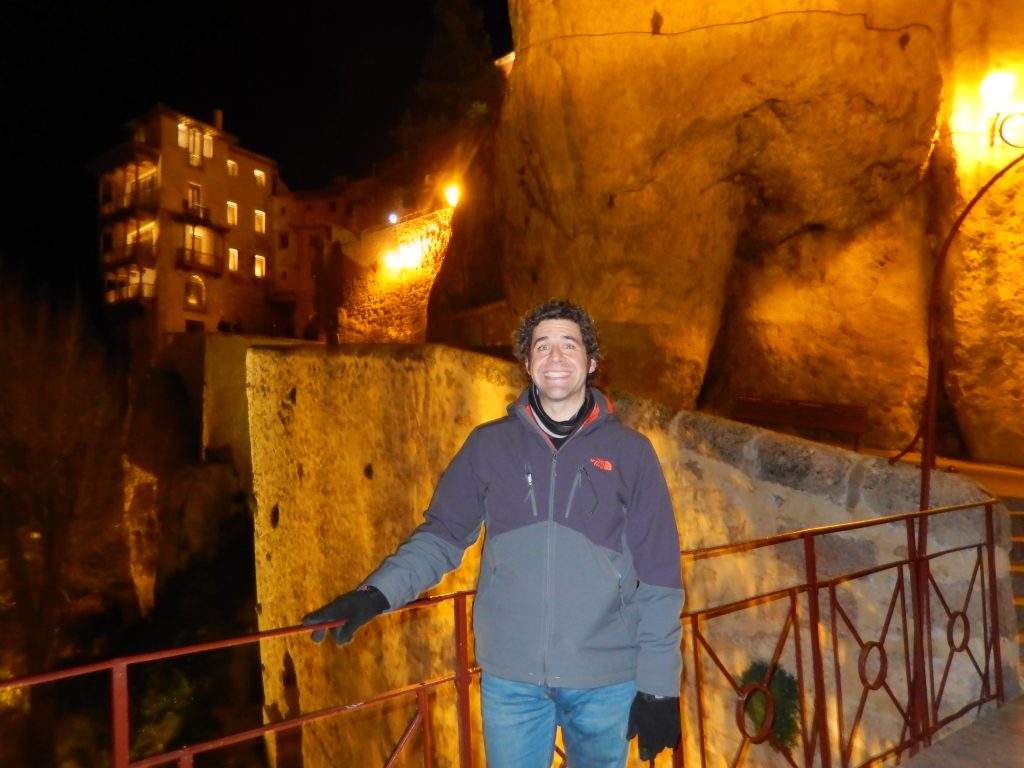 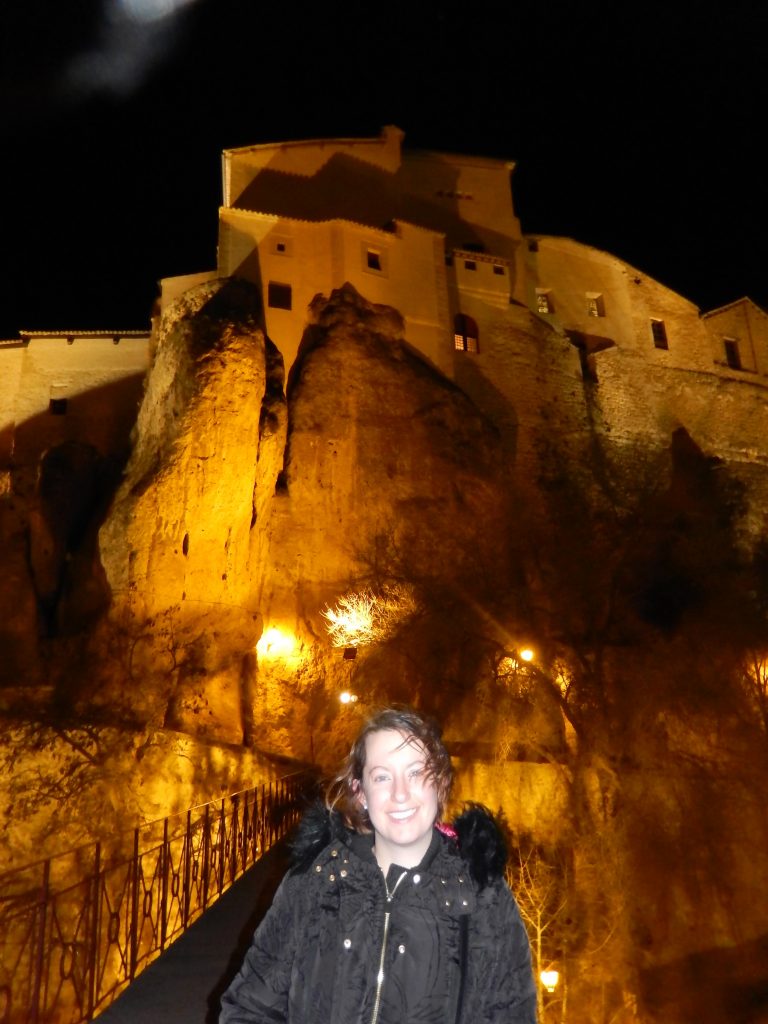 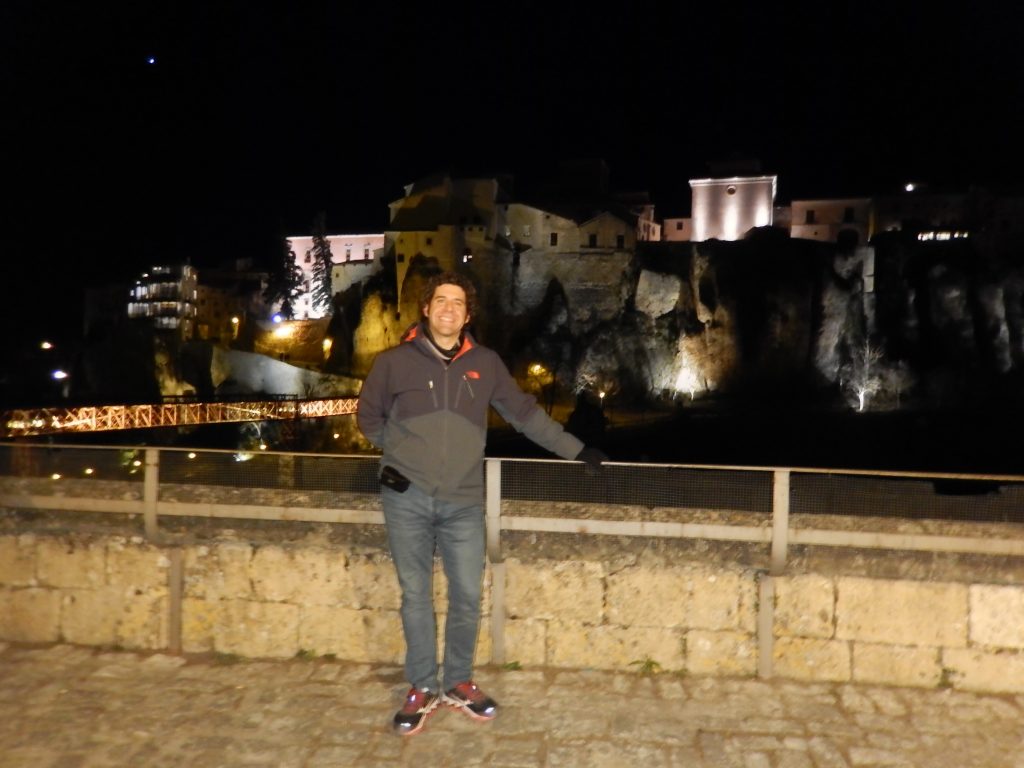 And finally – an unexpected surprise:

On our way back from exploring Cuenca by night, Doer and I were drawn into a nondescript church by the sound of festive music. Once inside, we admired a large nativity scene (belén) while watching a performance of a popular Spanish Christmas song.