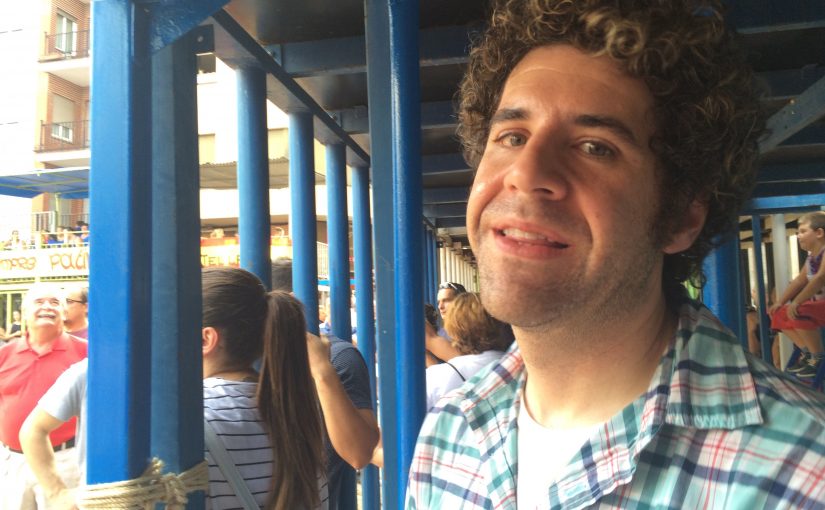 Even the most reserved travelers have to be somewhat open to new experiences. When you leave your comfort zone, you will have encounters that may make you uncomfortable. Obviously, Doer and I have been trying to approach our time living abroad with as much openness as possible. However, a couple of unexpectedly related recent events have caused me to consider my own openness.

The first incident happened our second day in the city of Castellón de la Plana. After spending a week in Madrid, Doer and I were eager to find a home in the province of Castellón, where we will be spending the next year. The day after our arrival, however, Doer was sidelined with food poisoning. My hearty eater did not want to take a bite of anything, and he did not want to walk around beneath the strong Mediterranean sun. Since I was feeling fine, I decided to explore the area. I was attempting to read some cultural flyers posted near our hotel – I often still need to translate from Spanish into English in my head, sometimes with the aid of a Spanish-English app – when a man approached me. If you are a lady, you probably have been accosted by a man you didn’t know at some point when you were alone, trying to mind your own business. Depending on the circumstance, and on your own personal feelings, this unsought contact may or may not have been welcome. Because I am an introvert, I am not always thrilled by unplanned social interactions with strangers, especially if the stranger is an unknown man and I am just going about my business in the street.

I had stopped with the intention of quickly skimming the flyers before resuming my exploratory stroll, preferably on the shady side of the street. The hot midday sun was beating down upon me, and all of a sudden someone had engaged me in conversation against my will. I did not want to stand beneath the sun and listen to him – if I’m going to be honest, I was understanding maybe 30 percent of what he was saying. He did not appear to be hitting on me, but I came to Spain to improve my Spanish, and I still have a ways to go before I achieve fluency. He was speaking rapidly, and he may or may not have been using some valenciano, which is another language altogether. This man was much older than me, and he had a kind face. Still, I was not in the mood to engage in conversation with a stranger – that’s not what I had set out to do! He was interfering with my plan.

Oh, sometimes how I wish I could invoke the spirit of a Meghan Trainor or Pink song when I find myself in these unwanted situations. Why didn’t I say, “no, gracias,” or pretend I didn’t understand him at all? Why didn’t I just walk away? Well, I am a Nebraska girl, and nice is in our nature – or if not in an official capacity, it’s in our tourism campaign at the very least. In that regard, I often present myself as open, even if I don’t always mean it. Instead of RBF, I seem to  have a case of Resting NiceFace.

I understood the man was talking about a nearby mural and about the varied cultural history of the city. I answered his questions as best I could and politely listened. After a couple of minutes, he brought out a clipboard – I knew what was happening. He wanted me to sign something. At this point, I was finished. I smiled courteously and said, “no, gracias.” Before I walked away, however, I did accept a flyer from him.

Later, I wished I had been more open to hearing what he had to say, even if I wouldn’t have understood everything.

The second incident really was not so much an incident as a 10-day event. As Doer has mentioned, we moved into our new apartment in Burriana right before their annual Fiestas de la Virgen de la Misericordia. Toward the beginning of this festival, we headed to the center of town to check out their municipal market, only to be greeted by a sandy plaza and heavy duty iron bars blocking off streets and barring businesses. We tried to walk around it, and we stumbled upon a livestock truck right before it was about to release six bulls, or bous in the catalán and valenciano languages.

Before I came to Spain, I told myself I never would watch a bullfight. While I wanted to experience as much Spanish culture as possible, I didn’t think my heart could handle the spectacle inside a bullring. I didn’t think it would be much of an issue – I just wouldn’t ever enter a bullring, am I right? Little did I know, many Spanish communities in Valencia bring bulls into their very streets during different festivals – it’s called bous al carrer, or bulls in the street. So that first day, we were right there, and the bulls were about to be released. I put plenty of distance between myself and that trailer – I remember standing by a parked car and thinking I could jump on top of it if the bulls somehow escaped all of the metal bars. However, my fear proved unjustified, as the animals simply took off once they were released.

Since I had been open to watching the bulls being released from the trailer, I figured I might as well open myself up to seeing what was going on with them on two of the central plazas. When we finally made our way down there – unlike many of the local men, we did not run through the streets with the bulls, so it took some time – five of the bulls had disappeared, and one of them was pawing the dirt while a shirtless man taunted him to try to get him to run. By the way, it was really strange to watch this very Spanish spectacle unfold to the soundtrack of American popular music. I remember hearing Meghan Trainor’s “No” start to play and thinking that this song could be this bull’s personal anthem.

Later, we returned to the same area in the evening. By this time I had downloaded a festival schedule from the Internet, and I knew what to expect. The nighttime bou would be embolado, which means wooden balls would be put on the tips of his horns – and subsequently set on fire. This event was very similar to the earlier one, except it was nighttime and this bull was wearing a necklace of bells and fiery wooden balls were affixed to his horns.

We watched bulls run through the streets and the plazas a couple more times over the next 10 days. One nighttime even featured six toros embolados – yup, all six of them were running around fiery horns. In retrospect, that instance bothered me the least – they were not isolated, and they only ran the course a few times before they were finished. It was a run instead of an opportunity to taunt them.

Before that occasion, there had been an event for children in which men with fake toros de fuego galloped through the same course several times, with children trailing after them (those fake toros also were embolados).

Every time I watched the bous, I felt both fascinated and uncomfortable. I finally had enough one night toward the end – it might even have been the final bull. We were finishing dinner when Doer turned the TV to the local channel, and we saw that they were preparing the bull to be embolado. We had never seen this part of the process before. The animal was attached to a post in one of the plazas (the same post I had leaned against a few nights earlier when we were watching the procession with la Virgen de Misericordia). He already was wearing his necklace of bells, and it appeared like some men were lighting the wooden balls on fire. Several men held onto the creature to steady him, including a couple of guys grabbing his tail. When they released him, one man kept hold of his tail for maybe 10 seconds or so. The bull appeared terrified, naturally, at one point falling over briefly onto his side before righting himself and taking off.

At this point, I had to leave the room. For some reason, watching it unfold removed from the crowd, from a distance, on television, was more sickening than seeing it in person. In that moment I felt deeply ashamed of each time I had watched in person.

In the spirit of openness, I am trying not to judge this centuries-old tradition. My research (OK, Wikipedia) indicates the practice began as a way to transport the animals to market. Also, as the product of small-town Nebraska, I could go to a rodeo tomorrow and legitimately and without irony say, “this isn’t my first rodeo.” The United States definitely has some questionable cultural legacies of its own, rodeo being one of the least questionable if you consider our entire history.

I’ve spoken with a few Spaniards over the weeks, and I learned people here are divided on the issue. Some refer to the cultural roots of the practice – and Doer and I saw for ourselves that many people, from toddlers to senior citizens, enjoyed watching the events. Others have said they oppose it because people often are injured and because of the cruelty to the animals. I read an NPR article this week about the growing momentum against bullfighting and bull running and learned there was a large protest Saturday in Madrid’s Puerta del Sol. Pacma, an animal rights political party that organized the protest, said it was the biggest one to date. As I read the article, I knew I had heard about that group somewhere before.

The flyer from the man who approached me in Castellón translates to “Parties Without Bulls: Let’s Cut the Torture.” He had wanted me to sign something, but I declined and walked away without waiting to hear what it was he was promoting. He was collecting signatures on behalf of Partido Animalista, or Pacma – the group that had organized the protest in Madrid.

I don’t know if my signature would have counted, as I am a foreigner, but now I desperately wish I had signed. I wish I would have swallowed my discomfort and that I had been more open to listening and learning.

Ultimately, I don’t regret watching the bous al carrer. As a former journalist (and an ordinary human), I enjoy observing and learning about the world around me. My personal feelings are not going to change a centuries old cultural tradition, but going forward I want to strike a balance between openness and remaining true to my core values.