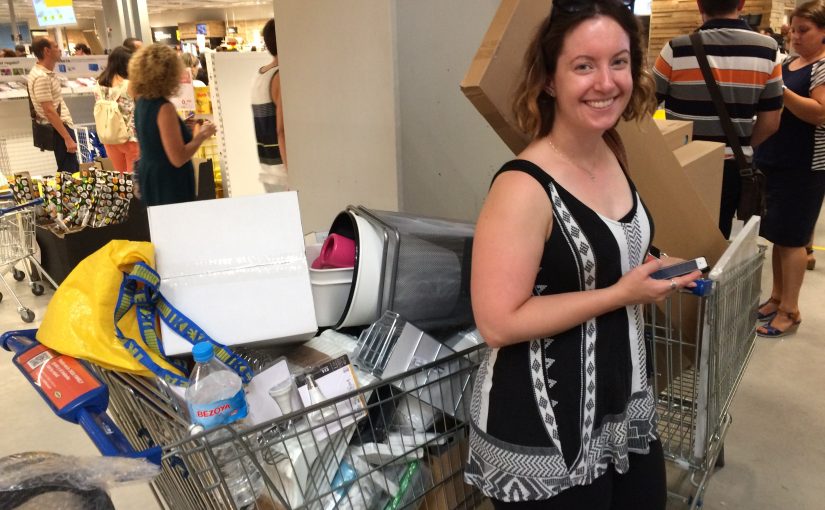 After months spent moving out of our house in Lincoln and weeks spent traveling, it feels like our lives are finally getting back to normal. We found a great apartment in Burriana, just down the street from where Dreamer will be working. So, my apologies for the lack of posts, but the past week has been spent in full-on nesting mode, building up our new domicile.

The best part for me is that I have a kitchen again! A very close second is high speed Internet. And of course we have both been house drunk on all the projects this has brought.

The kitchen is fully up and running, but in a constant process of improvement. For now, just having an unlimited supply of cold water and the ability to make eggs for breakfast have been huge improvements. But I have already turned out some great meals, often for little money as well. It feels so good not to be at the mercy of restaurants and to be in full control of what we are eating and when we eat it… not to mention the sodium and fat content of every meal.

What I absolutely could not get over was the damn fridge in this place. Every top-bottom unit I’ve ever seen has a reversible door, and I was sure this one was no exception. Except the owner had never changed it to open the correct way. Besides the obvious frustration, it’s easy to figure out that if you spend an extra two seconds to walk around before opening the fridge door each time, you might as well spend an hour to make the door open the right way. I am pleased to report the operation was a success and this stands as my greatest triumph in our new home to date.

Have I mentioned how easy it was to get Internet service here? And how fast and cheap it is? 300 Mbit download/30 Mbit upload Cable (fiber to the building) for 60 euros/month including TV+DVR and a landline phone. And they called and asked if they could install it a day early! Hells yeah I told them they could!

With Internet came my IP phone for work and our beloved CBS app on the Apple TV. Hello, Mr. Colbert! So nice to catch up on the past few weeks of shows, and also a great curative for homesickness. This after I spent no less than a full day trying to setup a VPN back to a VPS I have in the states, then a DNS proxy after that failed, finally giving up and trying a commercial service.

Along the way, I may have taken down some critical network services for a few minutes (sorry, “BLS” employees), but this was all in the name of finally figuring out in the end that we really didn’t need anything to cloak our location. That’s for CBS as of this writing. They seem to know we’re here but don’t really care; they just stopped serving us every US commercial in favor of 100% promos for other CBS shows. Netflix on the other hand goes to great effort to determine where you actually are, so of course if that is important to you, you will need some sort of VPN or DNS service for that, and they are apparently blocking many of those these days as well.

With our Internet, we also got basic TV channels, so it has been fun watching shows like The Simpsons overdubbed in Spanish. A great way to hone our vocabularies.

Then, of course, there was the Great Shoppping Trip last Tuesday. Dreamer and I ventured to IKEA in Valencia and got a bunch of stuff that was missing in our place. I’m almost done assembling all of it, too! That day was capped off with a trip to Leroy Merlin, which is Spanish Home Depot/Lowe’s. Seriously, a trip there may be an even better cure for homesickness than watching Stephen Colbert. I had to check Wikipedia to see if they shared a parent company or something. And what better way to cap off this day of American consumerism than dinner at Spanish McDonald’s?

It seriously feels great to be settled in again. Our lives are getting back to normal and we are no longer travelers. We have found our home.