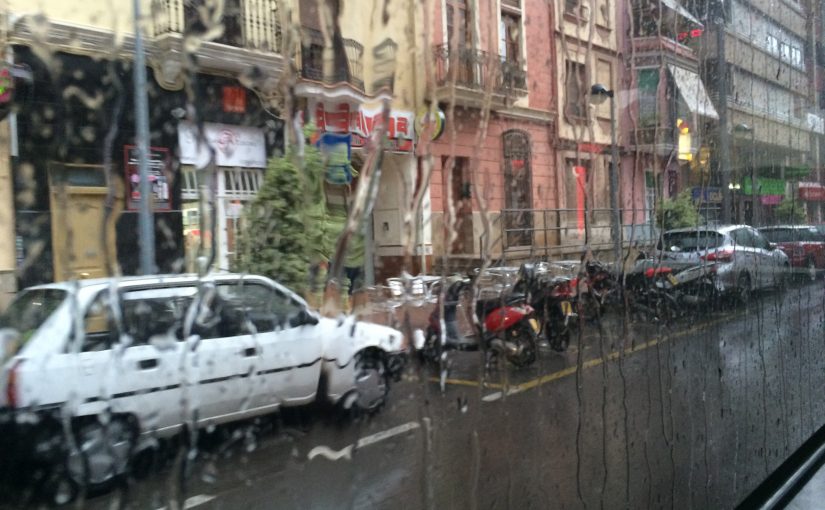 Though there are many cultural differences between Spain and the U.S., for me the one of the biggest changes may be living without a car. Plenty of Spaniards have cars, of course, but for us it doesn’t seem worthwhile to buy a car for one year. The paperwork alone – ay. Thus, Doer and I have been walking a lot more, I bought a bicycle, and we’ve been using public transportation. The trains between our town and other cities are fantastic, but up until recently we had not mastered the other big source of public transportation here – the autobús.

Burriana is not large enough to have frequent buses that take people all over the city, but there is a bus that runs once an hour, taking passengers to Castellón, the capital of our province. I had been studying the route online for several weeks, but I found it somewhat . . . confusing. At any rate, I finally came to the conclusion that the only way to learn to ride was to get on the horse.

The following is an account of one wild ride.

4 p.m. Tell Doer I had been hoping to figure out the bus route from Burriana to Castellón today, but my Spanish weather app says it’s supposed to rain. Doer scoffs, pointing out the sunny blue skies outside the window, and encourages me to go. I have a bit of cabin fever, and the weather app definitely has let me down before, so I decide to go – but I’m going to bring an umbrella, just in case. Doer scoffs at umbrella.

4:35 p.m. Set out for bus stop we saw a couple weeks ago. According to the photo Doer took, people were getting off the bus stop at 10 till the hour, so the bus should arrive at said stop at 4:50 p.m.

4:45 p.m. The bus is pulling up! It’s early! I run desperately, but it keeps going. I turn around to halfheartedly chase it, and the driver takes pity on me and stops. He informs me that this is only a stop for people to get off the bus (I think), so he can’t pick me up. He points to another stop across the dry river, and tells me another bus will come by at 5:15.

5:05 p.m. Find a bit of shade if I stand behind the bus stop at just the right angle.

5:10 p.m. Some more people begin arriving at the bus stop. A woman decides to share the tiny bit of shade with me. She lights a cigarette. I am forced to choose between sun exposure and secondhand smoke.

5:24 p.m. The bus has arrived! I board the bus, paying 1,5€ to ride to Castellón. We take off, leaving Burriana immediately. I follow along on my bus route map.

5:29 p.m. We pull up to the Hospital de la Plana, our first stop. The driver makes a loop but does not stop. Is this another stop where people can disembark but not board the bus?

We enter into the city of Vila-real, where we soon find ourselves stuck behind several vehicles that aren’t moving forward. After a minute or two, our driver honks. A couple of boys are playing soccer – er, football – in the street. The soccer ball – er, football – goes under our bus, and the boys dart around the massive vehicle to fetch it. The driver scolds them out the window as they make their way back to the other side of the street. Our driver honks again. Another couple of minutes pass, and finally we’re moving again.

5:50 p.m. We enter the city limits of Castellón, the capital of our province (and the city in which Doer and I lodged before moving to Burriana). Just as I remember – a city of many roundabouts and many sculptures.

6:05 p.m. We reach the final/initial bus stop in Castellón. The driver informs me I need to get off the bus until 6:15, when the bus will take off for Burriana. I comply.

While we wait outside, the driver helpfully explains the route to me. I partially understand what he is talking about. Then, switching to French, he asks me if I speak French. Flattered, I tell him no – English. I notice the sky is ominously overcast.

6:15 p.m. I board the bus and pay another 1,5€ for fare back to Burriana. We pull forward, and I see that the bus stop was very close to the hotel where we stayed in Castellón. It feels good to know the location somewhat and not feel completely lost. We appear to be backtracking a bit as we head back toward Burriana, passing some of the same landmarks in Castellón.

I notice the AC has really amped up since the storm began. Brr – maybe I don’t miss it that much after all.

6:44 p.m. I seriously think the lightning has to be touching the ground, or trees.

6:52 p.m. We are pulling up to the stop where I tried to get on almost 2 hours ago. People are getting off here. I’m tempted to follow them, as this stop is closest to our home. However, my desire to see the mission through to its conclusion proves stronger.

6:54 p.m. The bus is literally driving right by my building right now.

6:59 p.m. The bus pulls up to the final/initial stop in Burriana.

The driver assures people he will not force them to get off the bus right away – it would be “criminal.” Most wait a couple of minutes, take a deep breath, open their umbrellas if they have one, and step off the bus. I explain to the driver that we already passed the stop closest to my home, but I wanted to ride the whole way to learn the route. He kindly tells me he will not charge me for the last leg of the trip. We chat for a few minutes, and he informs me that Spain is the best place to live in Europe. You can stay at a hotel for 50€ a night, where you would have to pay 112€ a night in Marseille, France. Here in Burriana, one can walk around safely at night. If you walk around alone at night in Marseille, you will be dead by morning. Dead, with no organs.

7:15 p.m. The bus takes off again – I recognize this part of town. I’ve passed through this area to reach the local pool! Once again, it is reassuring to be familiar with my surroundings.

7:23 p.m. We have reached the end of the circle for me – the stop where I boarded the bus two hours earlier. Muchas gracias, I say to the driver, who is about to drive the same loop all over again.

As I get off the bus, I notice the rain has stopped. I cross the dry river (it didn’t rain that much) and make the short walk home.