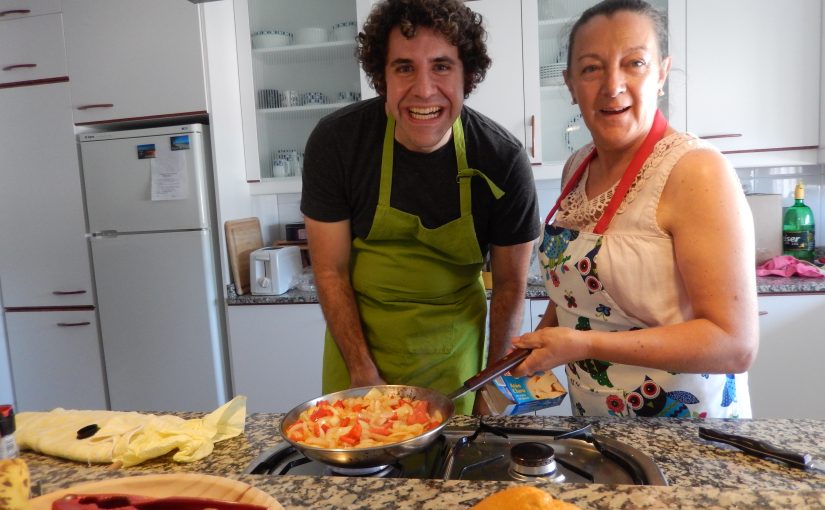 This post begins with a rewind to Day 3 and something I left out: a phone call after we returned home that evening from Mr. M’s sister, Conchita, asking if we’d like her to cook us a meal the next day. Conchita, you will remember, had previously helped cook some of the food at the furancho, to great success of course. Conchita is one of those Spanish mother types I had only dreamed of meeting and learning to cook from. She and her husband, Cito, live on a 40-acre farm about an hour from Sanxenxo. In her words, people come from miles around to eat her food. She cooks everything fresh, from scratch, and by eye only. I think my dream was about to come true… 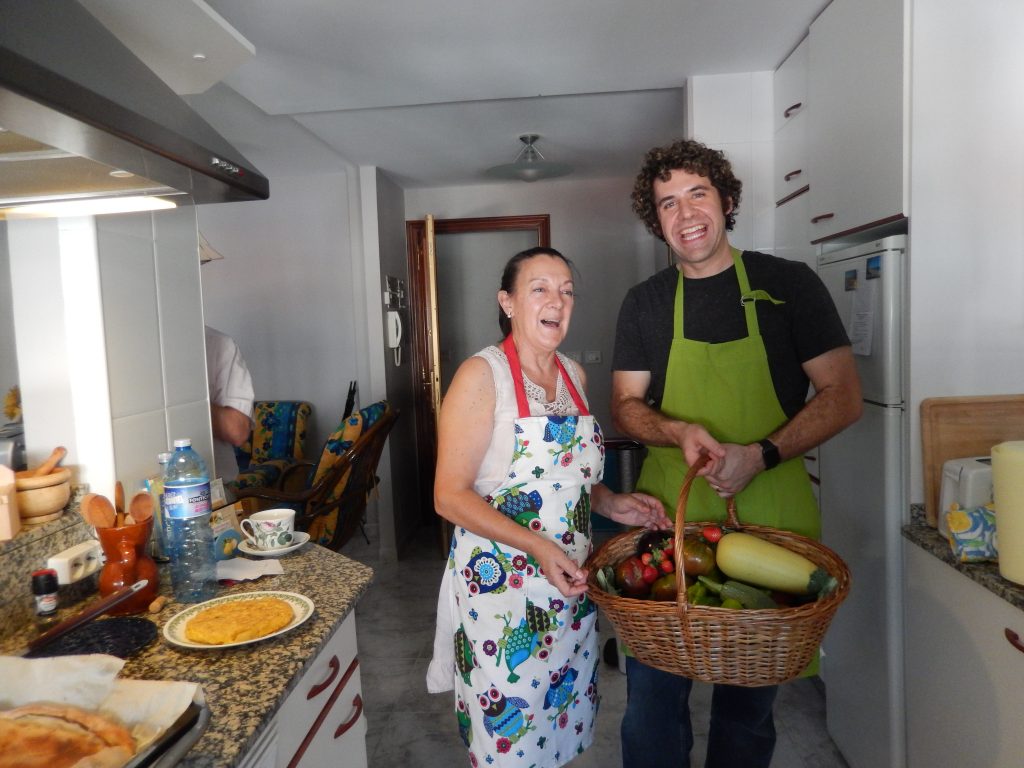 We began Monday morning with a trip to the market. Even in Burriana where we live, vendors come from all around to fill the town square on Tuesday – selling all manner of clothing, shoes, home goods, food… you name it. This must be a very Spanish thing, as Madrid has the famous Rastro flea market on Sunday mornings. At least we were well-prepared. Anyway, apparently, Sanxenxo gets a double dose of the market – on Mondays and on Thursdays – due to the neighboring town’s market also being held in the same place.

Conchita met us at the market and immediately asked what I’d like to prepare; you’ll have to keep reading for what we found. In addition to what we bought, there was a giant basket of fresh produce from her garden. 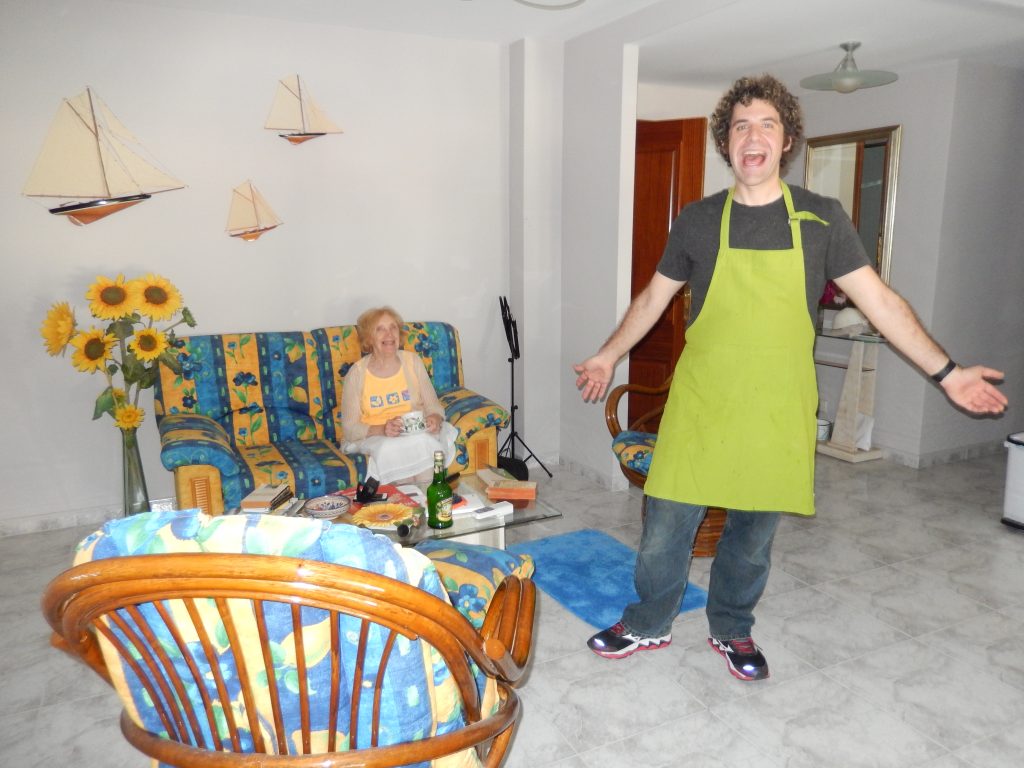 At this point, everyone else decided to take a walk for an hour or two while we did our thing. Conchita and I prepared quite a feast, and we weren’t even done yet.

Set out for lunch: roasted chicken over potatoes, fried eggplant, fried mussels, and an assortment of salads with the vegetables from Conchita’s garden. Everyone came back and ate with gusto. But Conchita wasn’t done yet: Mr. M was sent on errands – to the bakery to grab fresh cake yeast, to the supermarket to grab tuna and more potatoes. 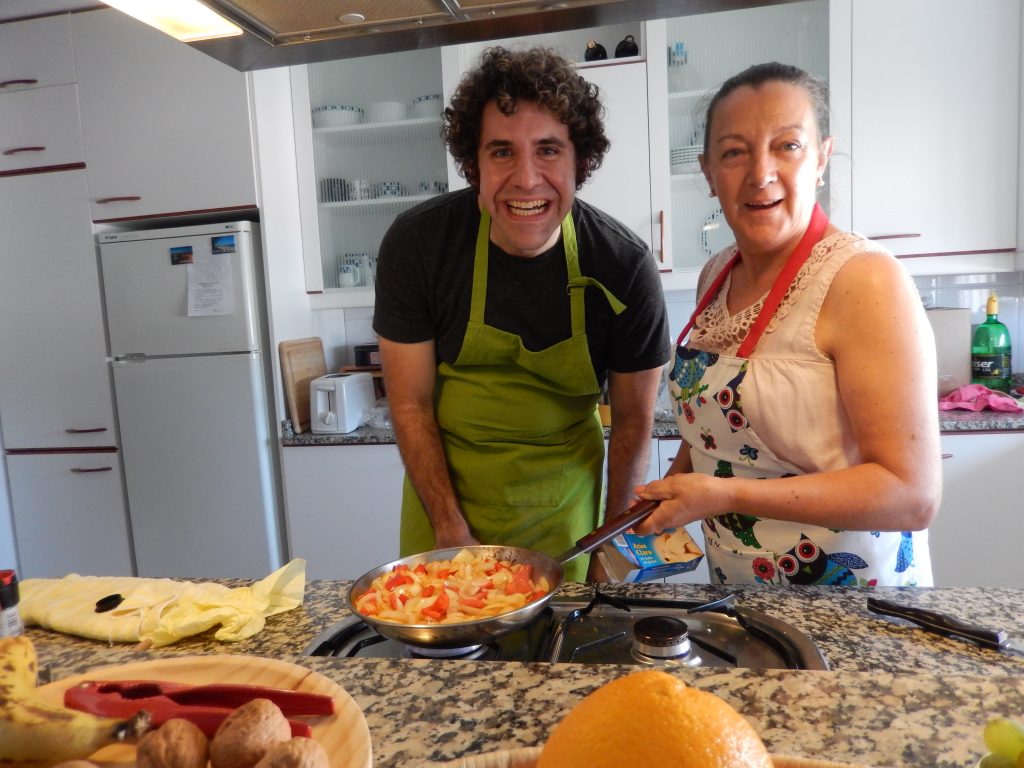 It’s worth noting on these errands that Conchie and her brother have a very healthy sibling rivalry going. Despite all his trips to the grocery store, nothing Mr. M bought or had in his kitchen was good enough: the onions too hard, the celery not fresh enough, his pans not correct… I just smiled and encouraged it. Nice to see this is something that crosses cultural boundaries.

After lunch, Conchita and I got right to work again, making a Galician empanada filled with tuna, onions, and red peppers; and the iconic Spanish Tortilla, which is more of a thick potato omelet in my book (though none the less delicious). This was eye-opening for me, as I was not only able to learn and perfect my Tortilla technique, but to see a seasoned cook make empanada dough from scratch without measuring anything. Seriously, she made this task look easy. When I finally attempt to make an empanada in my own kitchen, I’m sure it will be at least a partial failure. And I told her so. But someday hopefully my technique will be as good as hers… just need to keep practicing, right?

Both of the items we prepared were perfect for dinner later that night. Do I really need to mention that? So great to have a home-cooked meal prepared in advance, and learn “the Spanish way.” 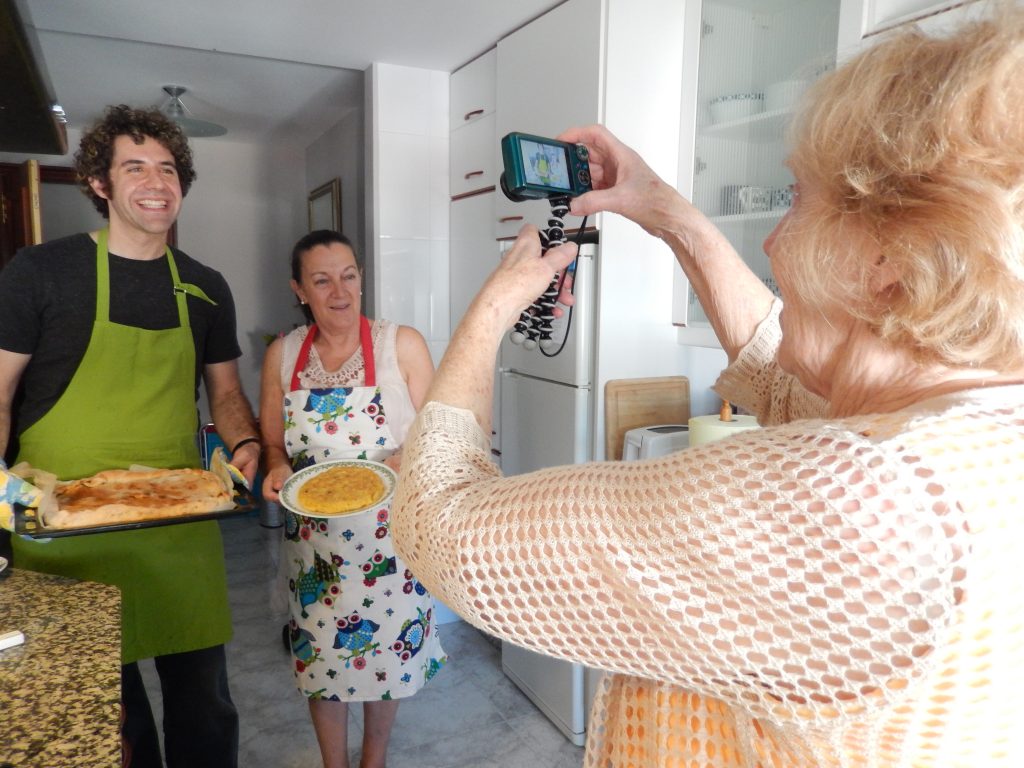 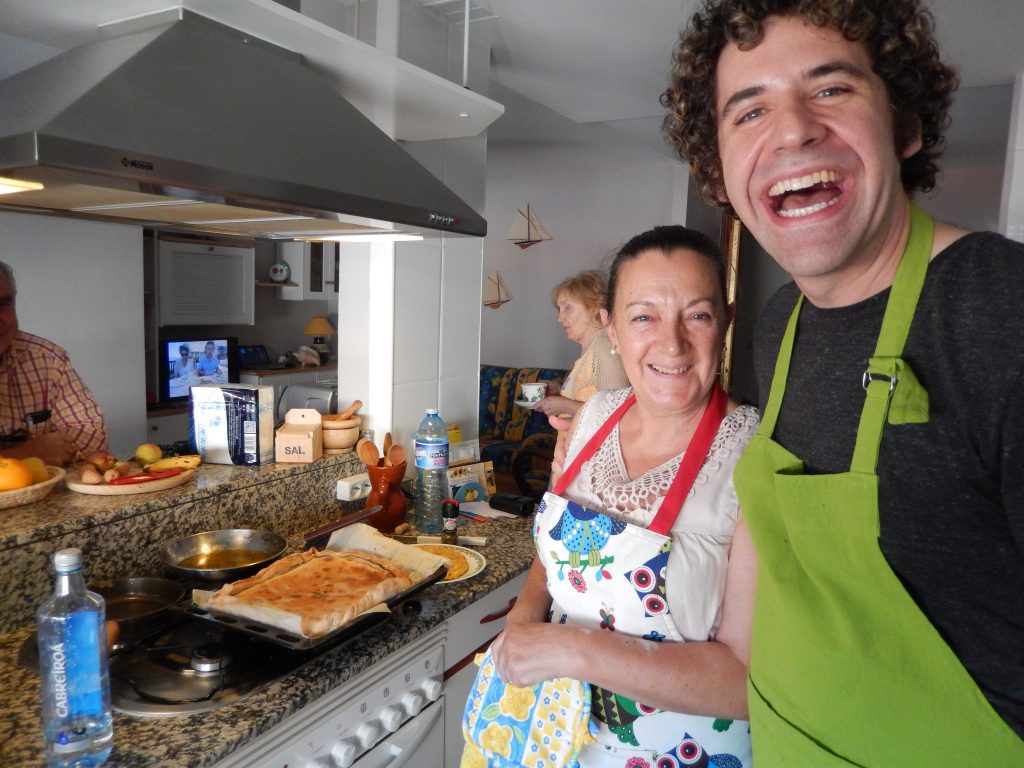 Ready for my siesta after all of this prep, I was instead whisked into a car for more sightseeing. Apparently, everyone else wanted to do something now…

Off to the town of Combarro [link in Spanish! translation], an old fishing village. I immediately heard “Oreo” and my ears perked up – though not as much as Dreamer’s, since she is officially the world’s biggest fan of cookies. Apparently the term was actually hórreo, I think from the same Latin that “hoard” derives from – signifying a grain storage vessel much like corn silos you might see in Nebraska. These are the ancient Spanish solution to getting through winter with enough food to spare. The ancient residents of this village even solved problems of rodent infestations (raised legs with wide tops) and rot (slats between wood or stone coverings).

Apparently, the bigger your hórreo, the richer you were. Since nearly every dwelling in this village has one out back, it is assumed all of the residents were doing quite well for themselves. Today, the hórreos still serve an ornamental purpose and tourists from all around come to walk along the narrow streets of this old stone village, which literally goes right into the sea.

And I do mean narrow streets. In most areas inside the village, only two people could pass side by side. It was difficult maneuvering around the busloads of tourists there with us, but somehow we managed, focusing on the ancient beauty within. Many people still live here, not to mention the many homes converted into businesses like restaurants, bars, and souvenir shops. 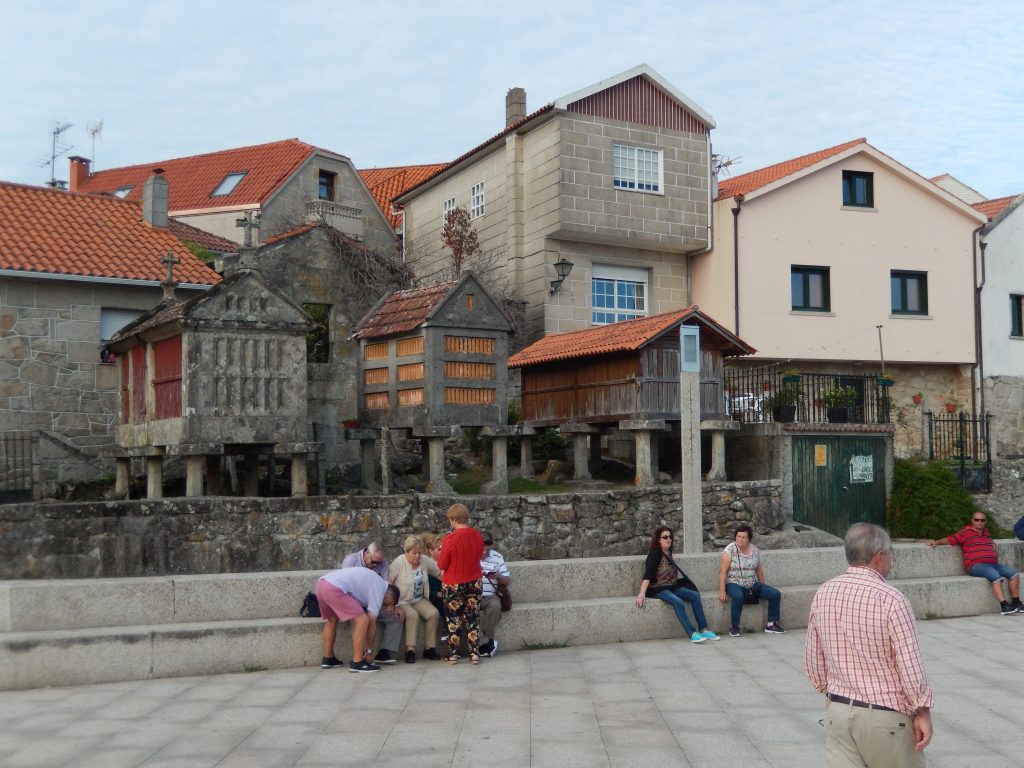 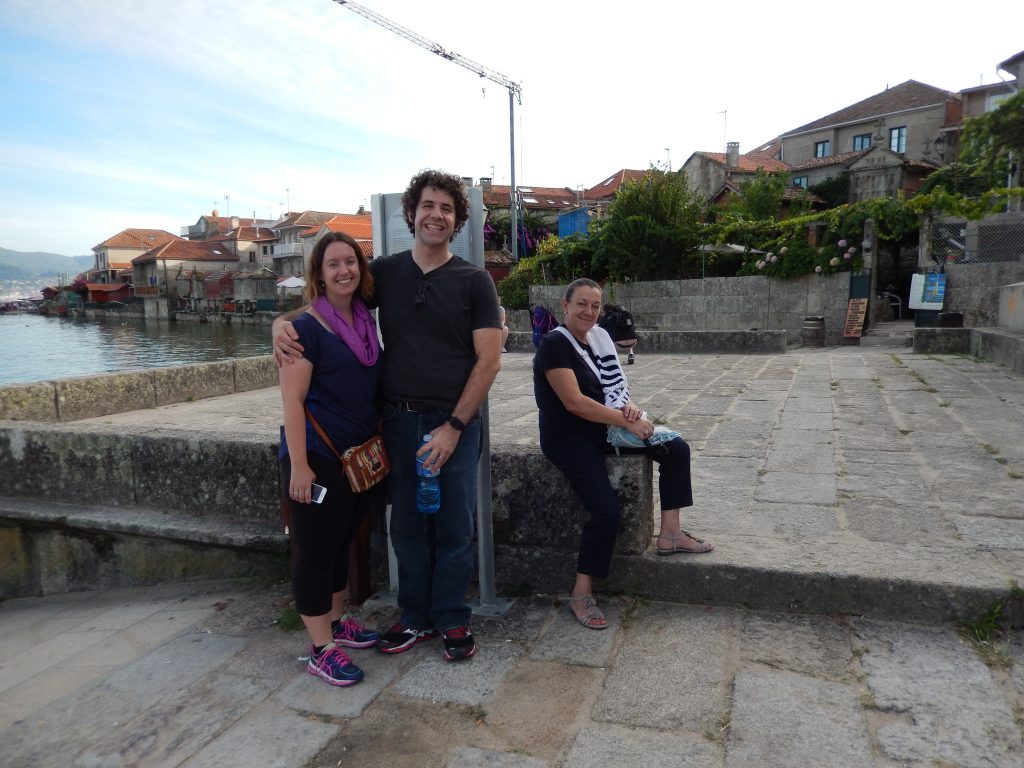 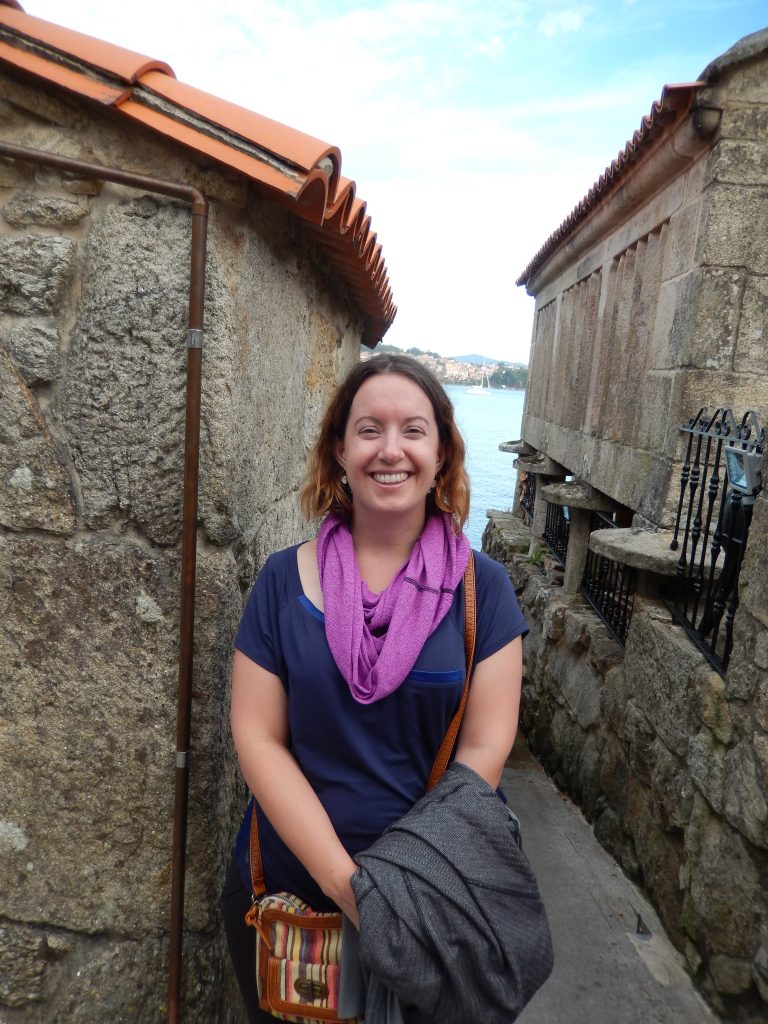 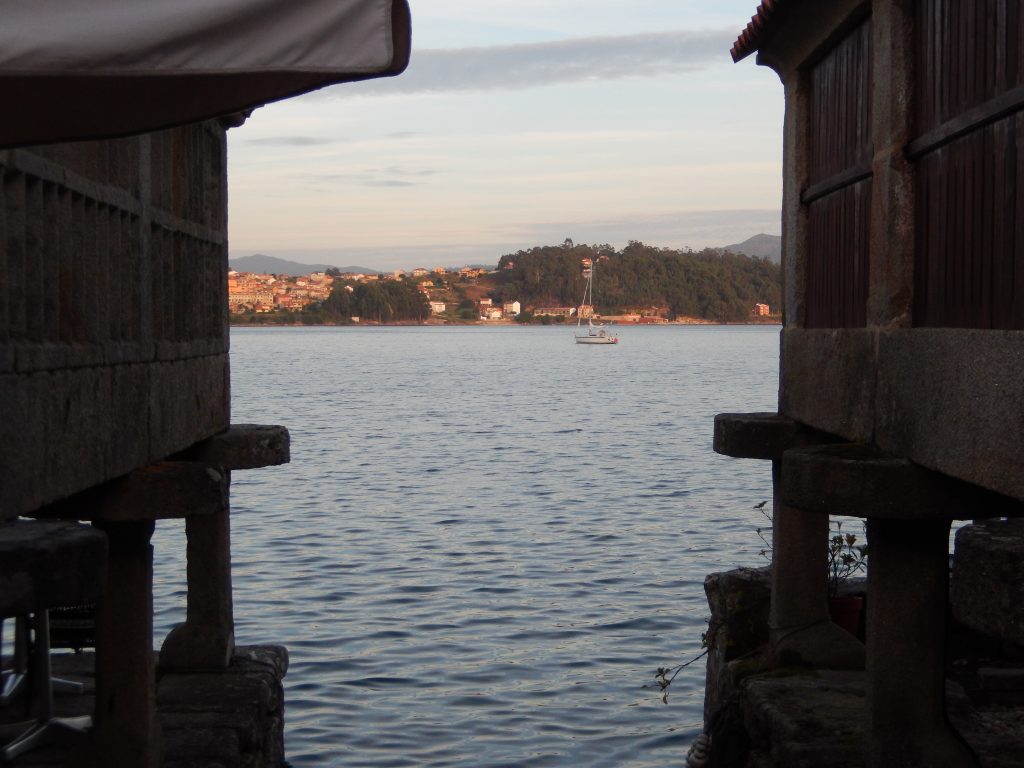 Running short on time after our visit to Combarro, we made a quick stop at Poio monasterio and hostel. We were lucky enough to find a mass taking place at the monastery when we popped in, so we were sure to be discreet. 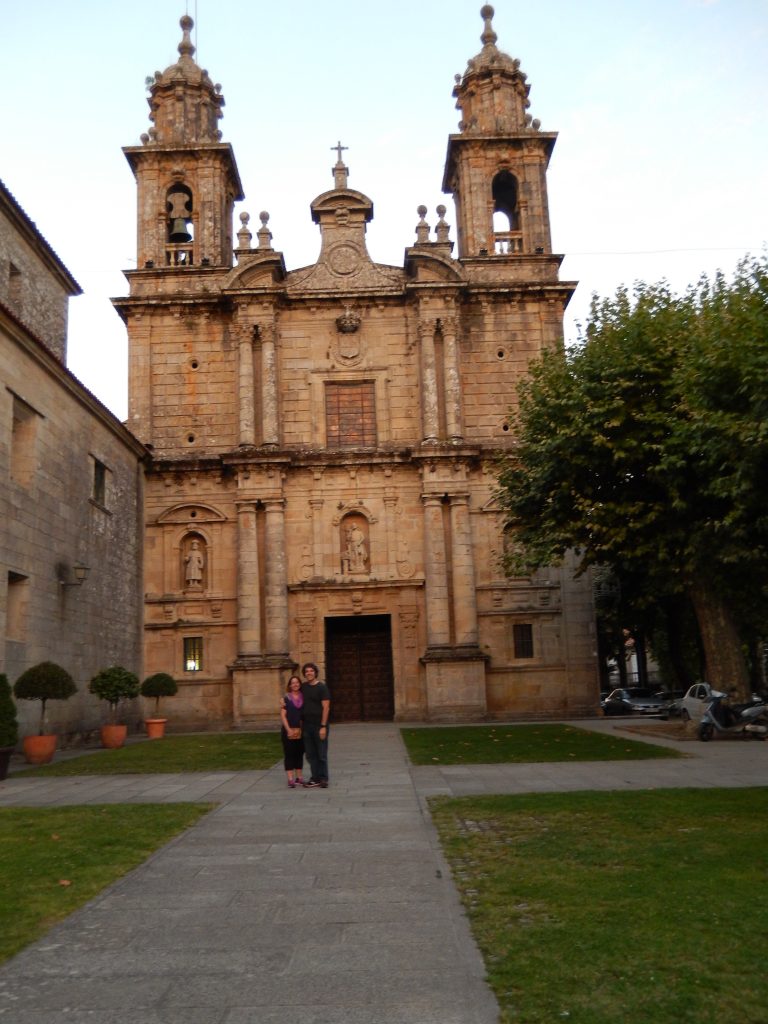 Thus, our adventures in Galicia came to an end. We had an early flight out of Santiago de Compostela airport the next day. Dreamer may share her thoughts someday, but we had such a great time for these four short days. We are forever indebted to M & M for their generosity in not only hosting relative strangers in their apartment, but taking their time during the entirety of this visit to show us the best Galicia had to offer. It cannot be said enough: we would have had a completely different – and likely inauthentic – experience had we tried to make this excursion on our own.