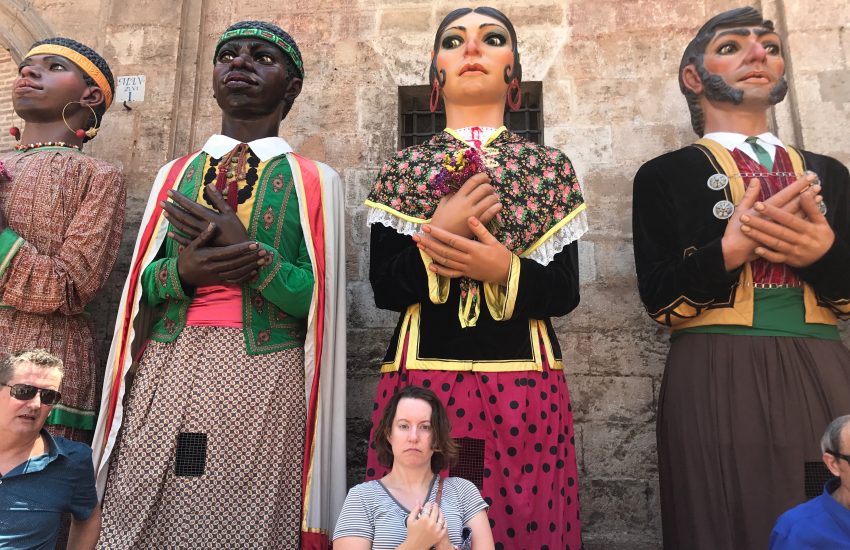 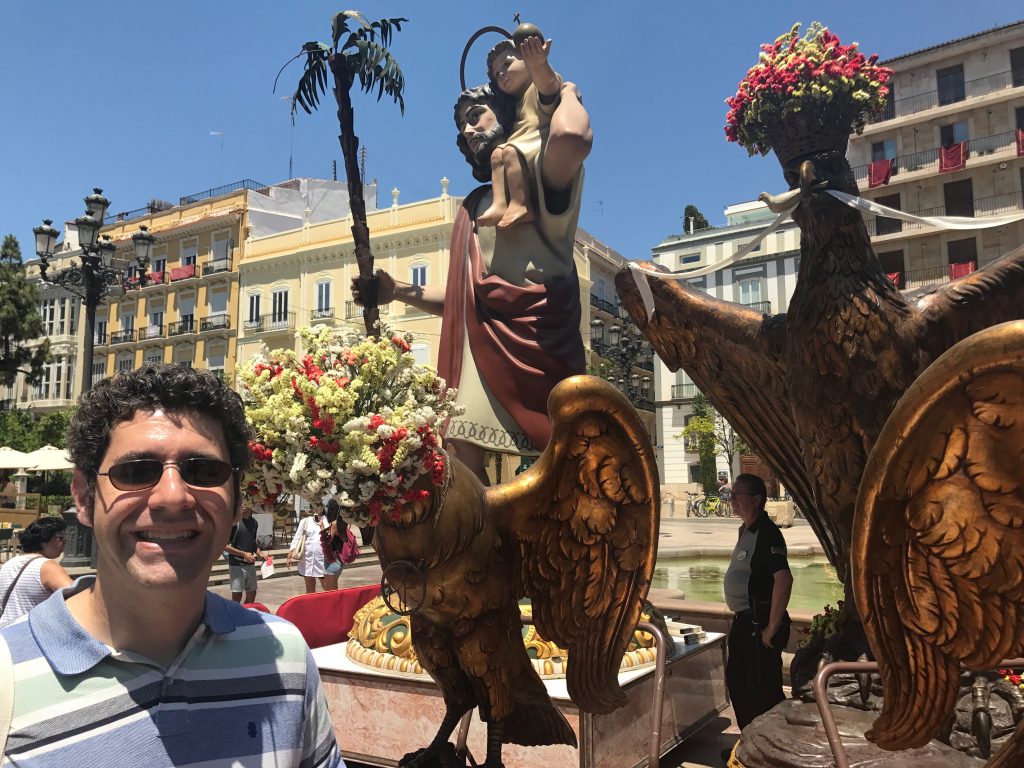 We made it back from dropping off Mom in Madrid last June just in time to see the actual Corpus Christi parade through the center of Valencia – or so we thought. As this was a Spanish parade, it didn’t actually start when we thought it would, so we had some time to kill. More about that in our next post.

The Plaza de la Virgen was a hive of activity, with all of the important parade figures waiting for the festivities to begin. 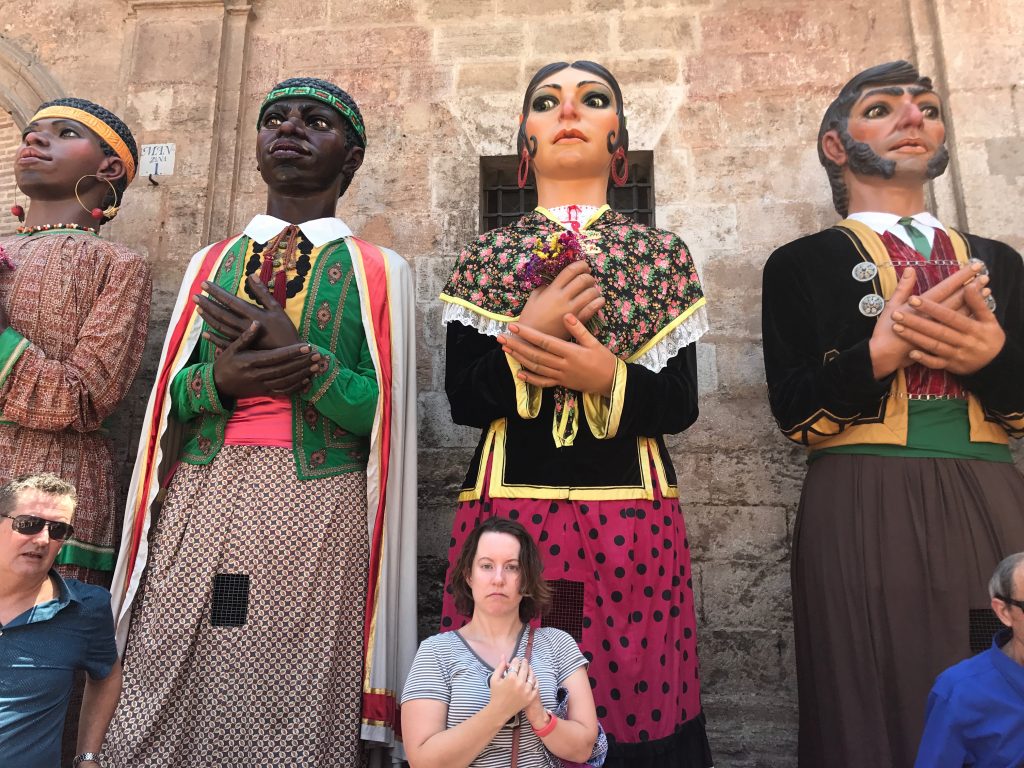 Soon we got to see those gigantes in action! Imagine our surprise when one of the humans popped out for some fresh air.

Who knows how hot they must have felt, as we were roasting under Valencia’s merciless late spring sun. 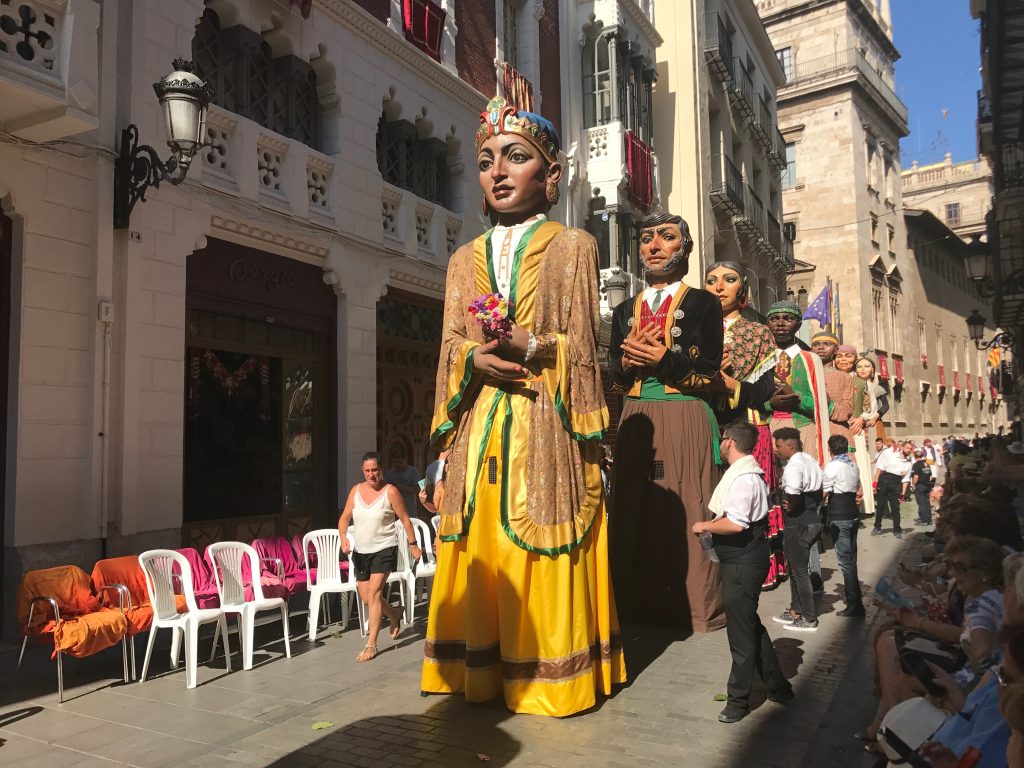 In addition to gigantes, there were cabezudos – basically, just the head part.

As the above photo attests, it was kind of weird when the performers took them off. 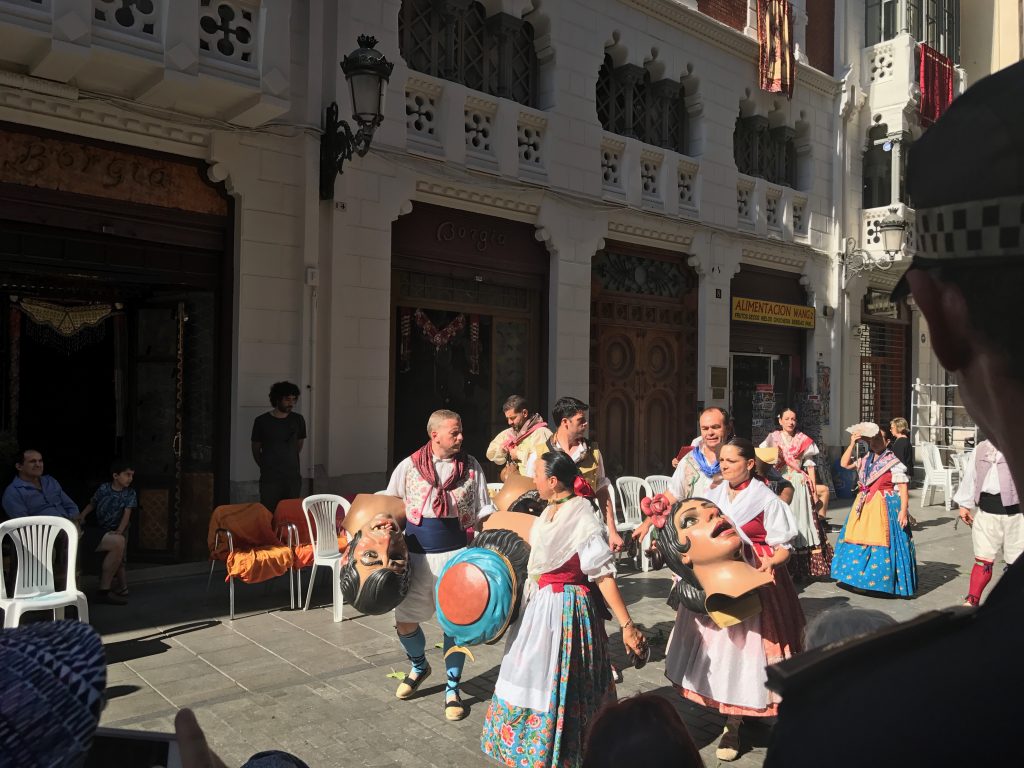 Traditional dances are a big part of many groups in this parade, like this one around a pomegranate. Check out that synchronized braiding and un-braiding! 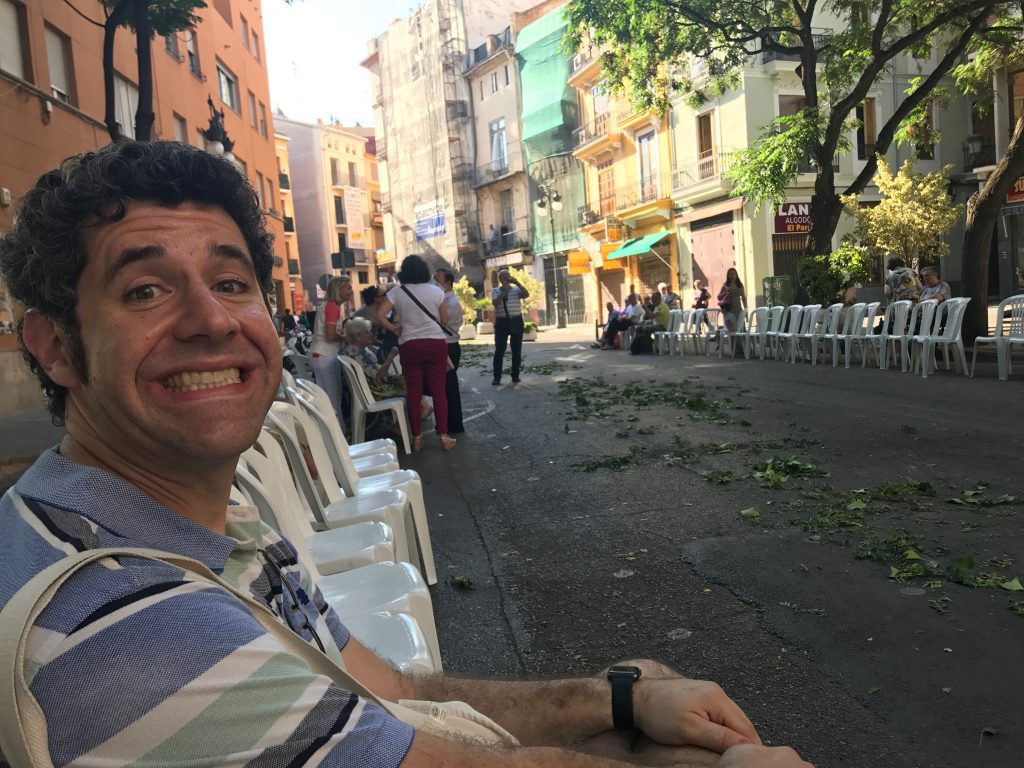 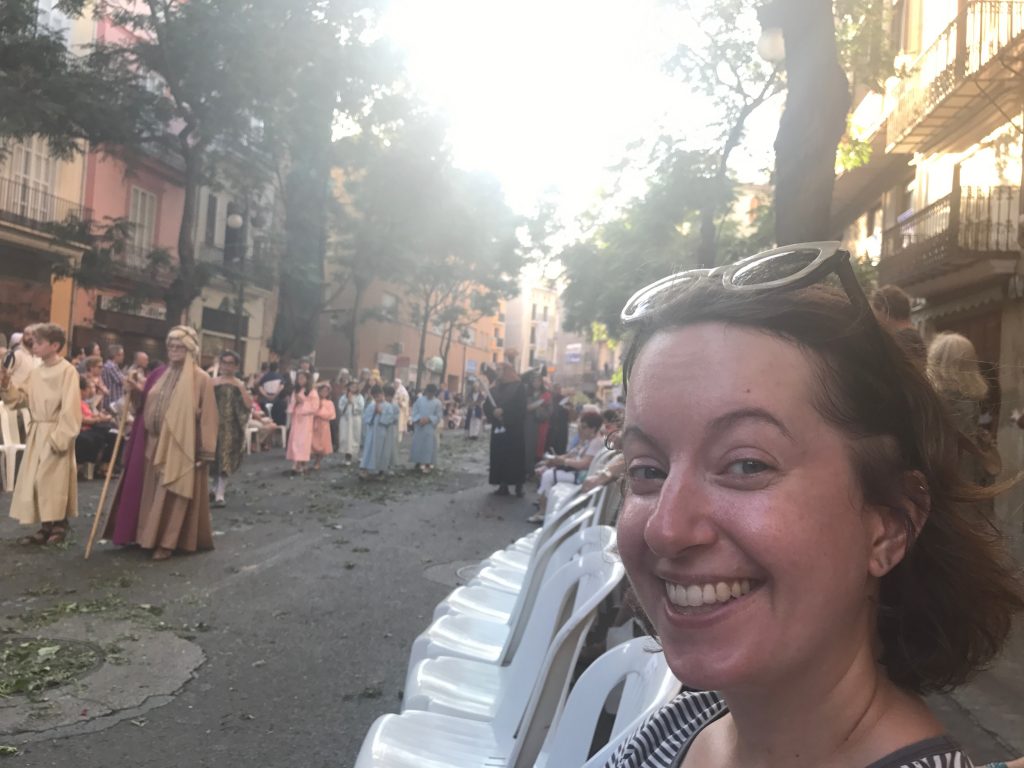 Those chairs were money well-spent! Even some of the people taking part in the big heads’ dance took an opportunity to take a load off.

Dreamer was pretty impressed by it all. Or maybe it was that the “reason for the season,” that sleek swimmer’s body all muscled up and toned, made her feel judged again. 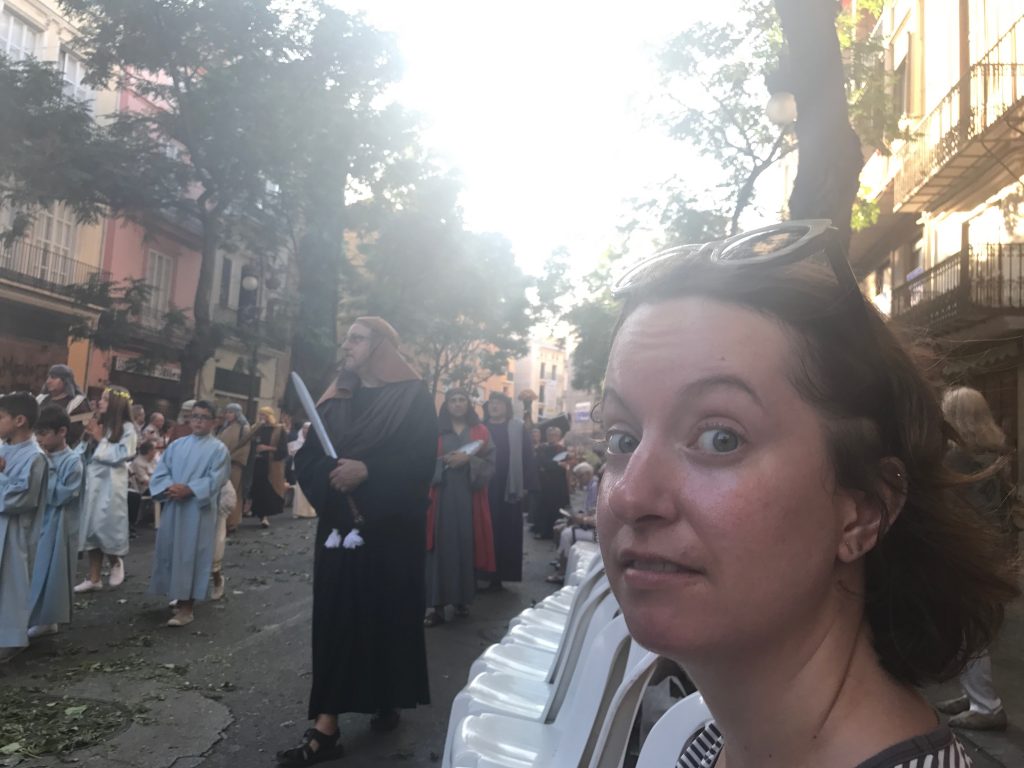 Speaking of judgment, let’s not forget the religious origins of this parade. Observe, if you will, the Dance of the Moma, in which the Seven Deadly Sins attempt to defeat white-clad Virtue herself.

While Corpus Christi is a religious feast celebrated all over the world, Valencians are very proud of their heritage, and naturally they found a way to incorporate some civic pride into the parade. The words on the shields are adjectives proclaiming the greatness of the city.

Locals welcomed the dance groups by applauding, burning incense, and throwing down coins as tips from their balconies.

We then made our way to the Cathedral to see the source of the parade. Trying to track which group was actually coming out against the program was kind of difficult. Honestly, compared to the stuff above (which came first), we were pretty bored by this part.

The festival is one of the few instances in which the public can see the monstrance. We had been waiting to see it emerge from the church at the end of the parade, but it seemed like it would never come. As it was the end of a weekend of travel, we were eager to get home and finally had had enough parade, so we headed to the train station to try to catch a ride home.

But wouldn’t you know it, we missed the train by less than a minute. Since the next one was not coming for an hour, Doer decided to head back to the route to glance the ‘strance… and maybe return with some fro-yo treats in hand, this being a sunny hot day and all. 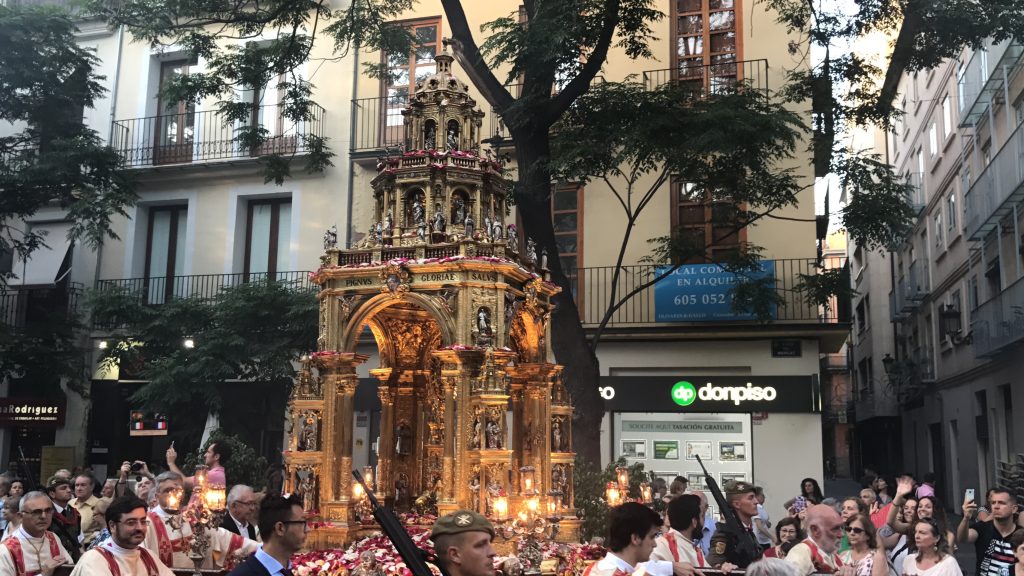 It was real. And it was SPEC-tacular. Countless dollars of church money tied up in a show of extravagance!

…and the parade finished with this guard, immediately following the monstrance.

In keeping with the spirit of the title of this post – a headline easily identified as coming from a former lady journalist – we’ll leave you with a couple more looks at some of our favorites in case you didn’t get enough videos above.