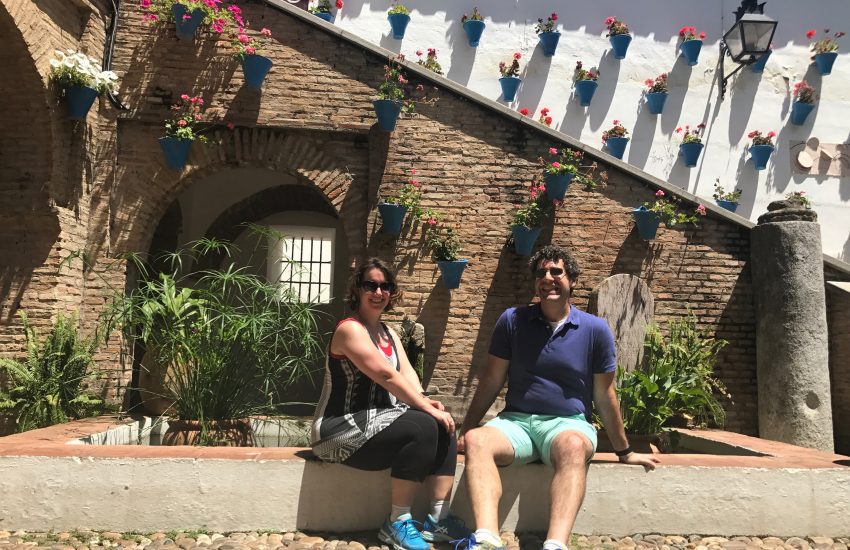 Our May visit to Córdoba was so full of interesting sights (and resulted in so many photos) that – somewhat to Doer’s chagrin – Dreamer decided the trip deserved a rare third blog post.

You see, courtyards (known as patios in Spain) truly are an ubiquitous part of the city; they can be found just about everywhere.

While many of the courtyards we visited were part of people’s homes and are only open to the public during the festival, there are plenty of patio-related destinations that are open year-round, including a palace featuring TWELVE. DIFFERENT. PATIOS.

But before we get to the patios, we dance. Flamenco, to be specific.

Like courtyards, flamenco was part of Dreamer’s preconceived notions about Spain. And, also like the courtyards, it really pertains to southern Spain, not the entire country. In fact, the two tropes go hand-in-hand, as flamenco often has been performed in courtyards. 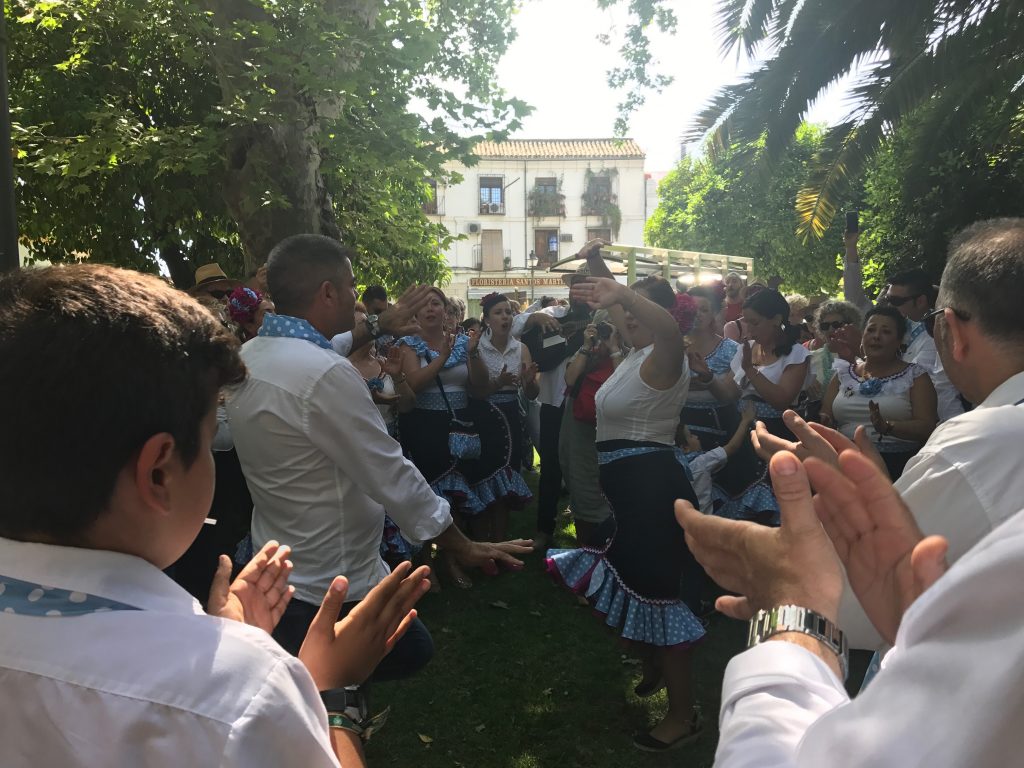 We decided not to go to one of the many flamenco performances tailored to tourists – Disney flamenco, we thought. Luckily, Dreamer stumbled upon this local group celebrating flamenco in the streets. 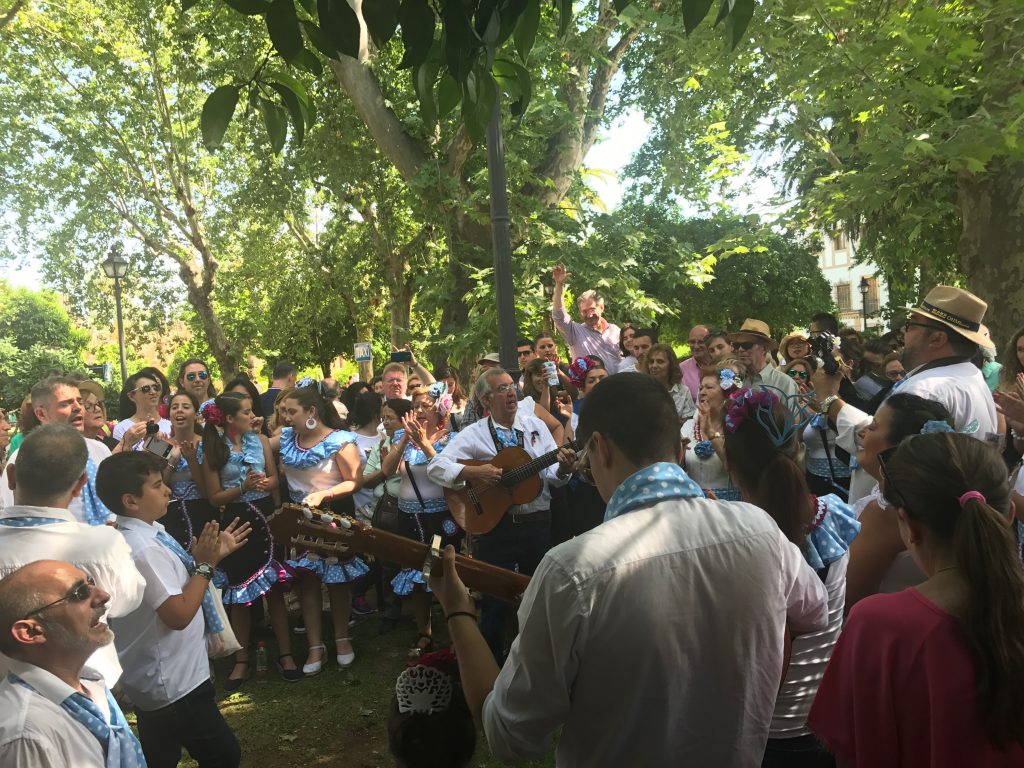 Even bystanders not wearing the traditional clothing got into the experience.

Dreamer loved how this woman worked her fan.

There also was a center dedicated to the art form, where Doer learned that tricky flamenco rhythm. Watch him attempt to capture the essence of flamenco with his feet:

At the end of the above video, a woman who works at the center can be heard saying, “it’s with the hands!” Oops.

The flamenco center is located in Posada del Potro, a 14th-century inn built around – surprise! – a courtyard. Spain’s most famous writer, Miguel de Cervantes, stayed at the inn, and he even wrote about it.

Nearly as old as the inn, the Palacio de Viana is a palace and courtyard museum established in 1492. Visitors can wander through its 12 elaborate courtyards year-round. 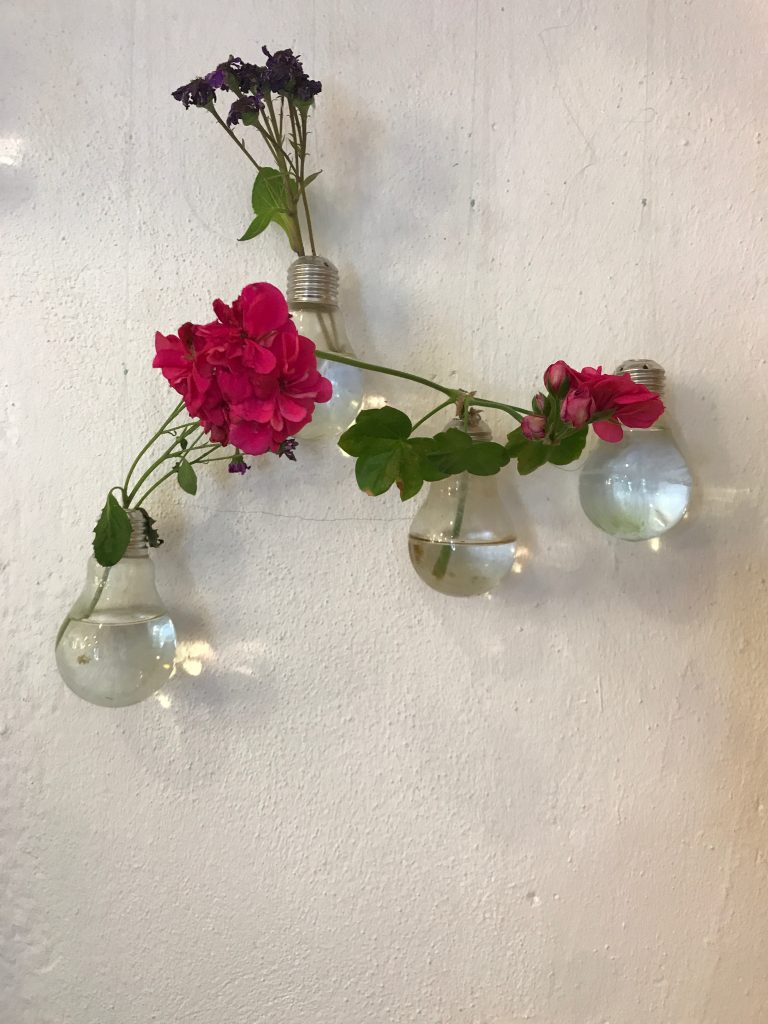 The Reception Courtyard served as the main entrance to the palace from the 16th century.

The Courtyard of the Orange Trees is reminiscent of an Arab orchard garden.

The Courtyard of the Bars is the only one that looks out onto the street and was meant to display the wealth of those who lived in the palace.

The Madama Courtyard is named after the nymph of the fountain, surrounded by a cypress topiary.

The newest addition, the Courtyard of the Columns was built in the 1980s as a space to host events.

The Courtyard of the Pool, also called the Greenhouse, is a service courtyard.

The Garden is not a courtyard, but rather a green oasis within the palace.

The Courtyard of the Well draws upon an underground stream that provides water to all of the courtyards and fountains of the palace.

The Courtyard of the Gardeners was used to store the garden tools.

The Courtyard of the Gate features brick walls and pavement cobbled in two colors.

The Courtyard of the Chapel adjoins a chapel.

The mezzanine near the Courtyard of the Archive contains more than 400,000 documents, some of which date back to the 12th century.

Another, more modest 12th-century dwelling in the Jewish Quarter also opens its doors to visitors. Casa Andalusí is decorated to recall the time of the Caliphate, and it also houses a paper museum. 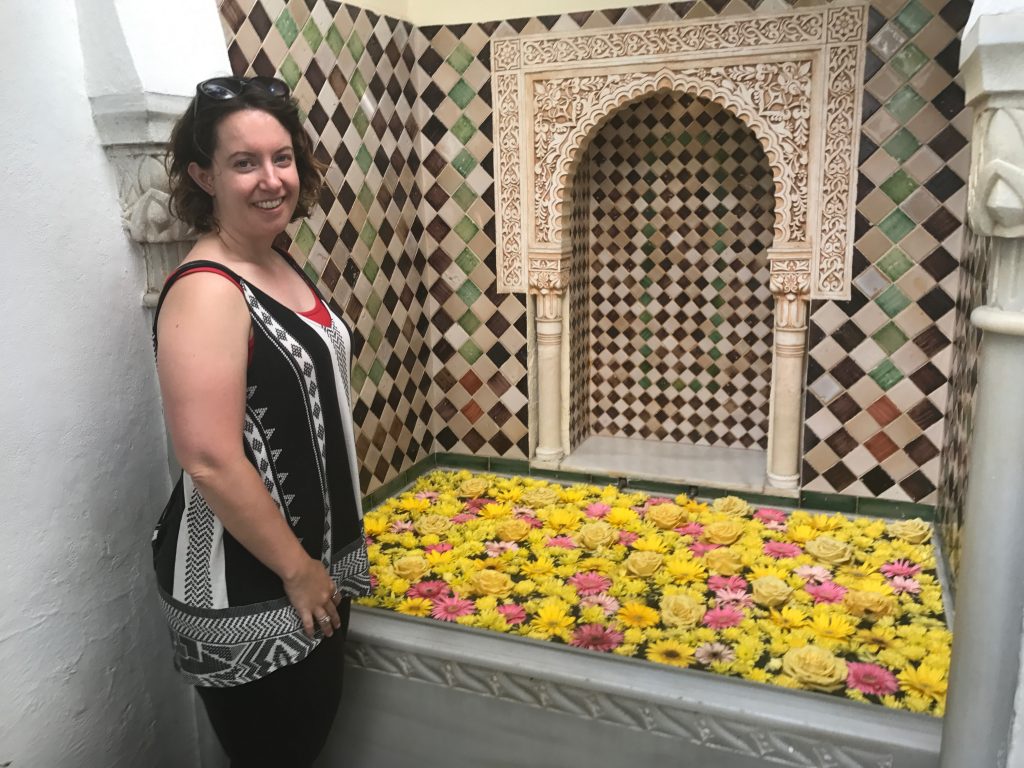 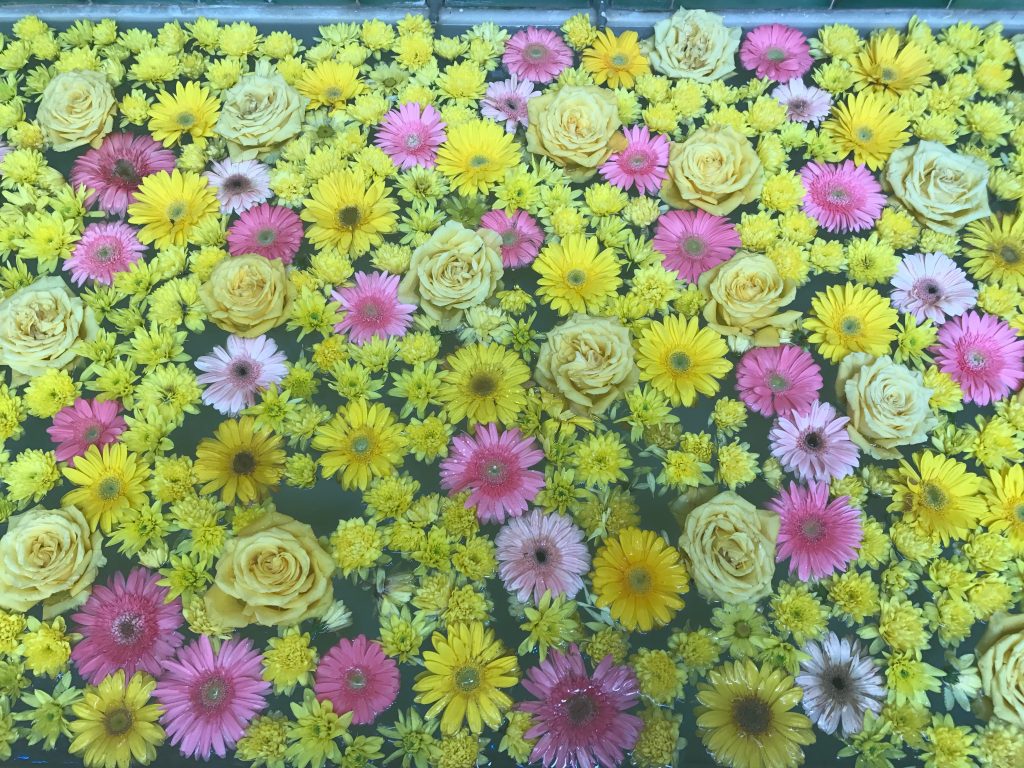 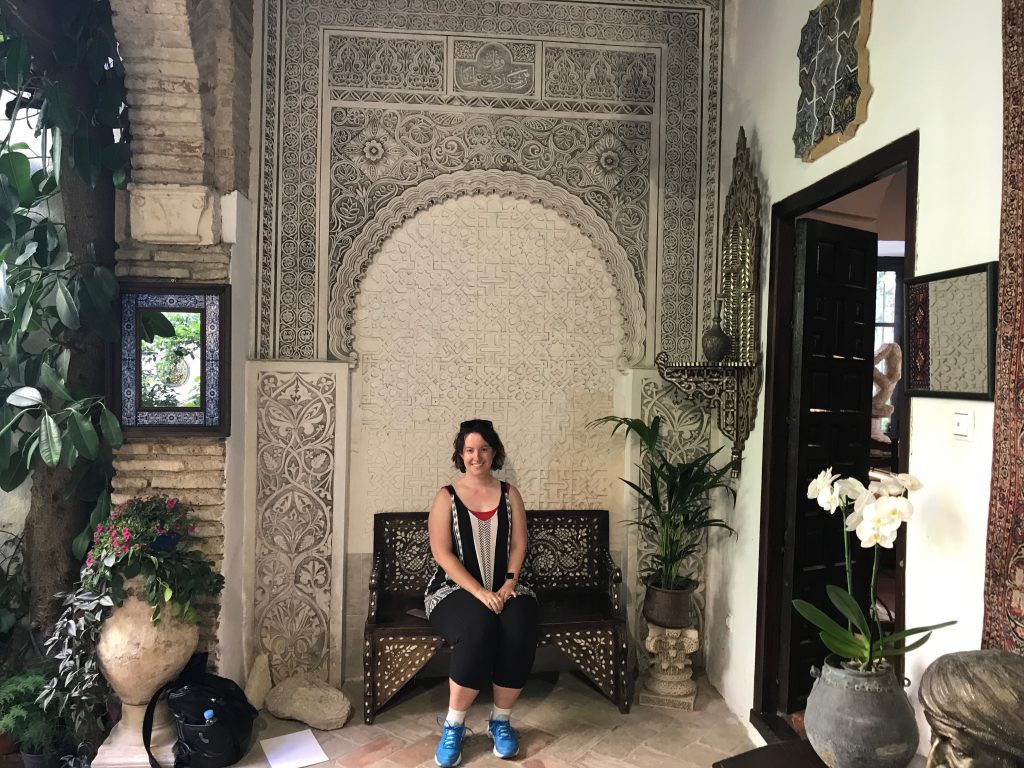 Many places in Córdoba feature Mudéjar influence, including the Chapel of San Bartolomé, considered one of the city’s finest examples of the style. 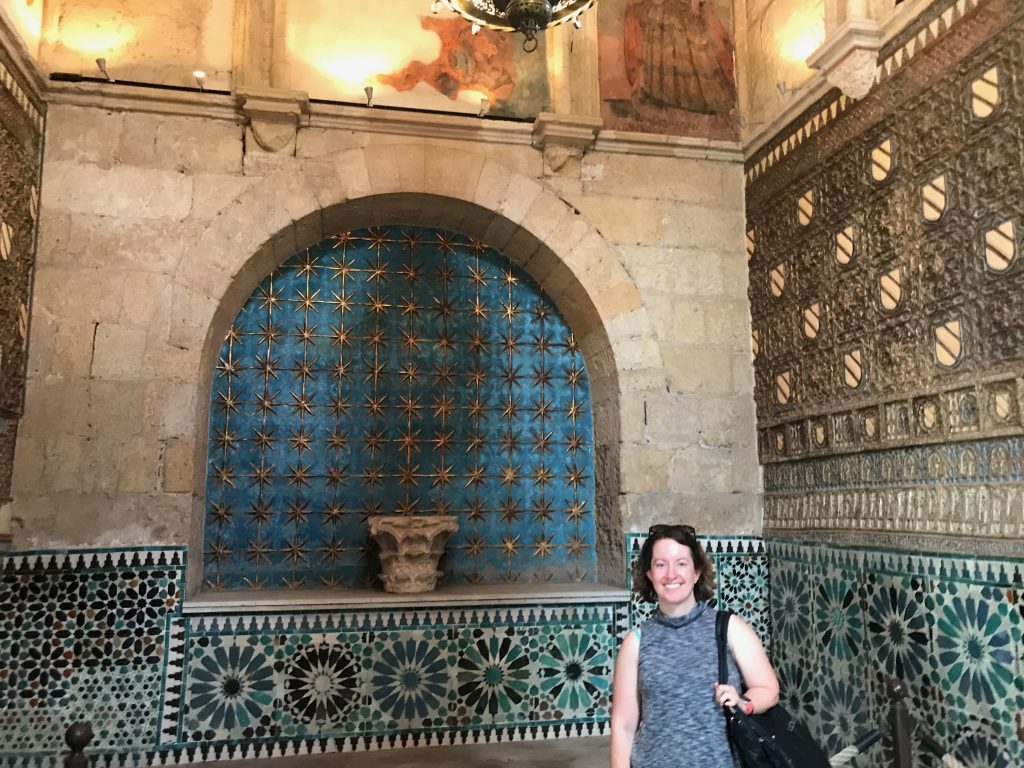 According to information at the chapel, the word Mudéjar comes from an Arabic term meaning “he who has been allowed to remain.” It’s reflected in the Muslims who remained in Spain after the Christian reconquest, who retained their religion, language, and customs. 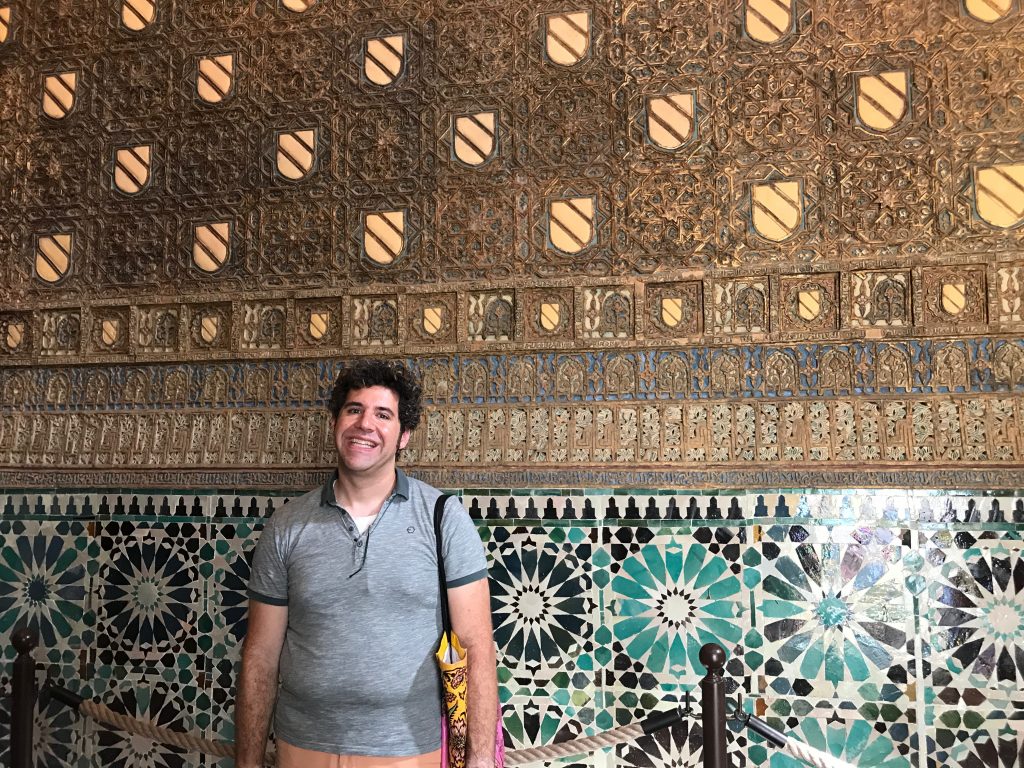 Mudéjar art was born out of the medieval coexistence of Christians, Muslims, and Jews in Spain. 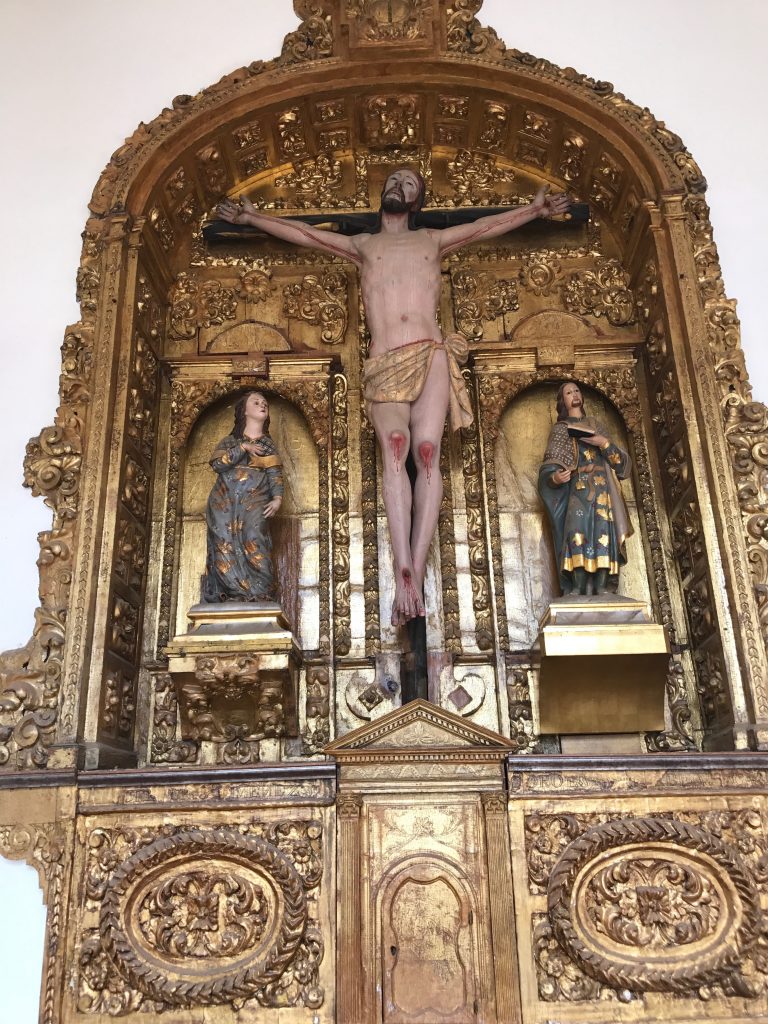 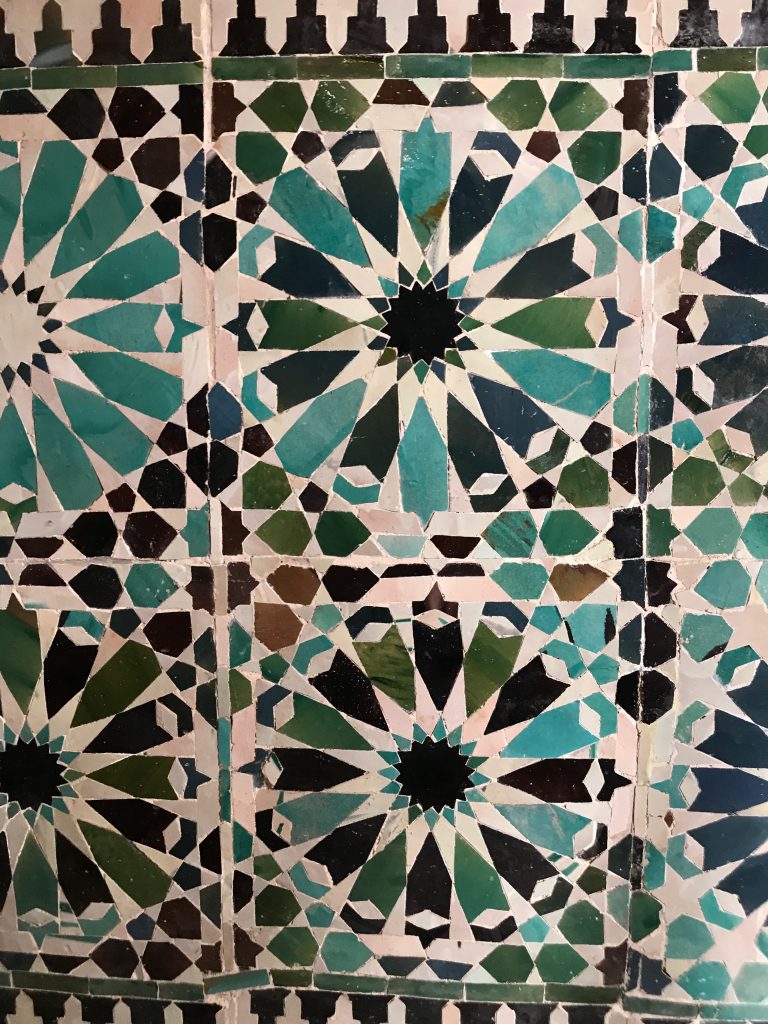 For something different, we visited the museum of local painter Julio Romero de Torres. We really liked his paintings, but photos weren’t allowed. To see some of his work, click here.

The Zoco is the site of an old market in Córdoba.

How about a little flamenco encore to end the encore post?