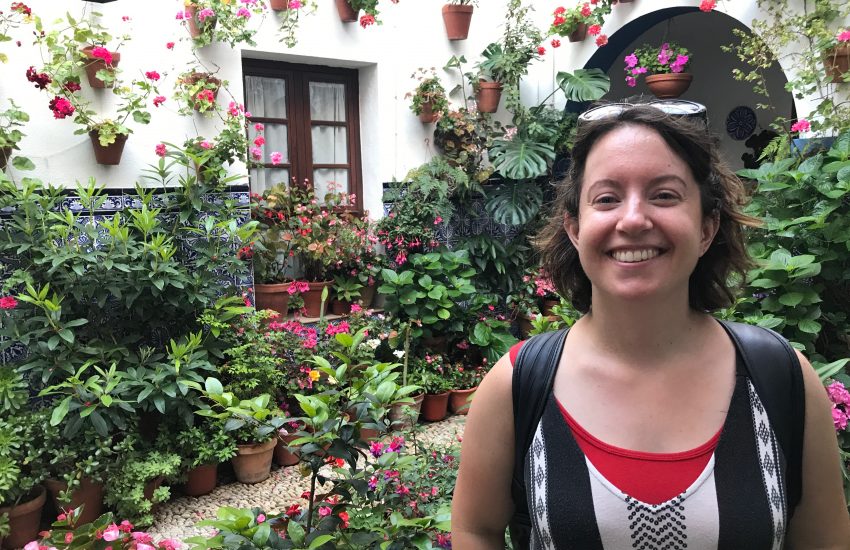 Spain brings many images to mind. Bulls, maybe, or flamenco. Paella or sangria, even. Before she ever set foot in the country, Dreamer associated Spain with courtyards.

However, when we moved to the Valencian Community, on the eastern coast of the country, we did not find tranquil inner courtyards in abundance. We learned these cool sanctuaries – which have traditionally provided respite from the brutal heat – primarily exist in the south, especially the city of Córdoba. 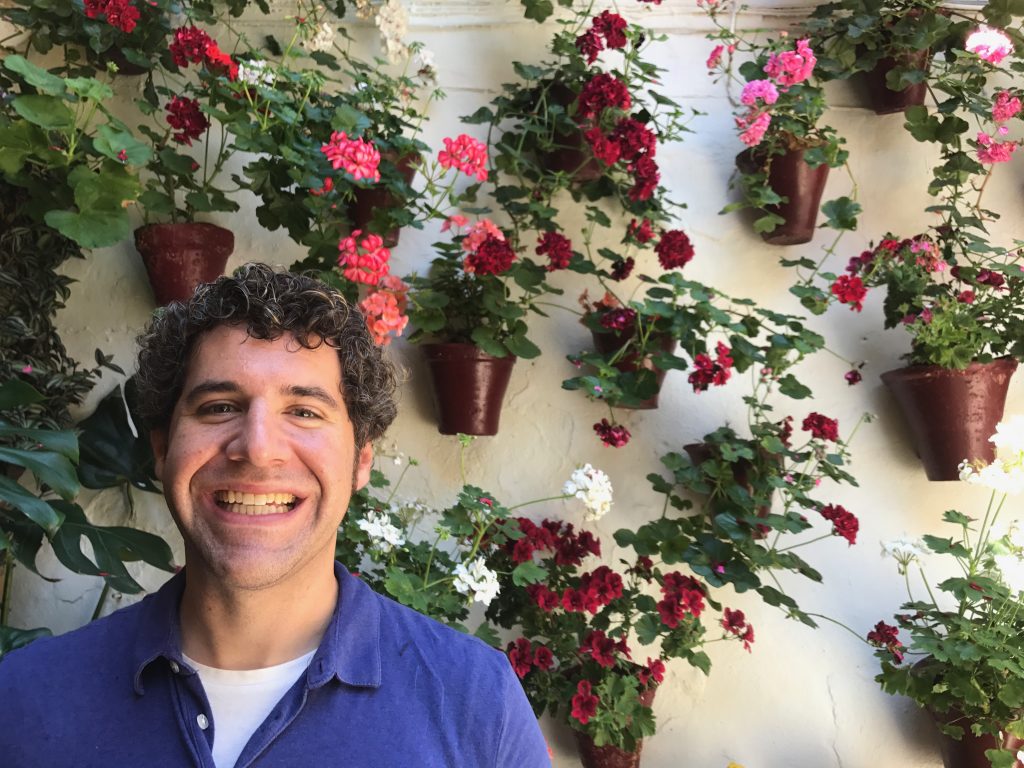 We arrived near the end of the competition, in early May. The fiesta of the patios in Córdoba is a (UNESCO) World Heritage Site, designated an example of Intangible Cultural Heritage of Humanity – a distinction also shared by the Fallas festival in Valencia and the Krampus runs we saw in Austria. 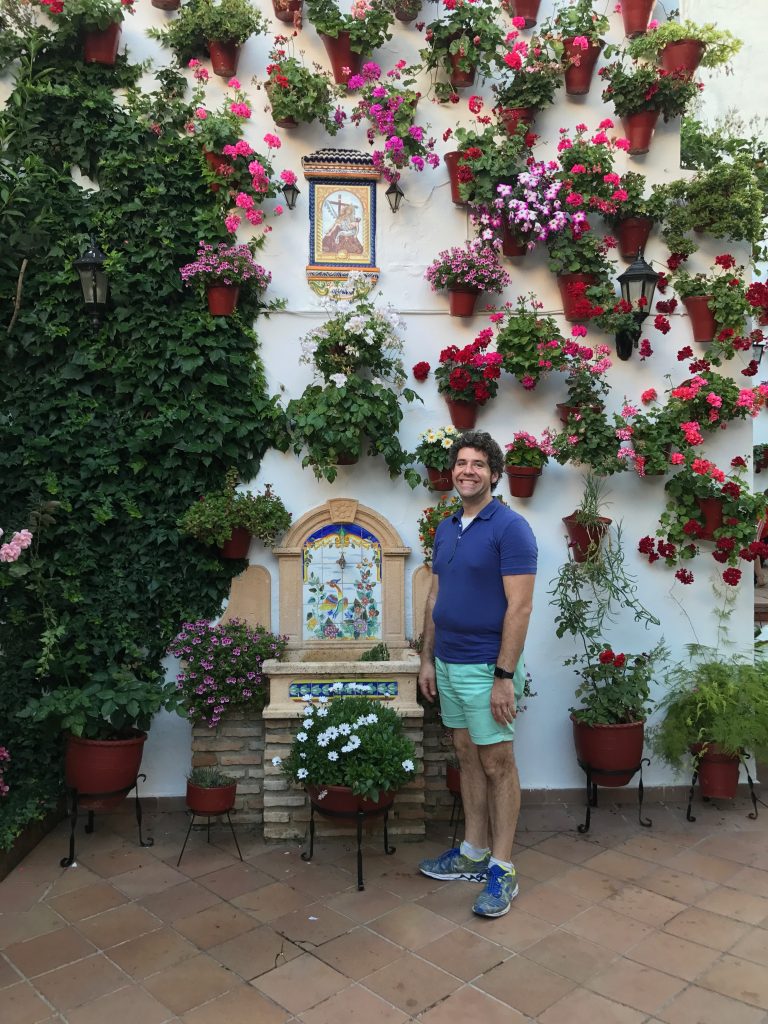 Dreamer loves her some patios. It is not surprising, then, that she took nearly 1,500 pictures in Córdoba, roughly half of them being patio-related. The others were photos of historic mosques, synagogues, fortresses, and the like – the subject of our NEXT post. 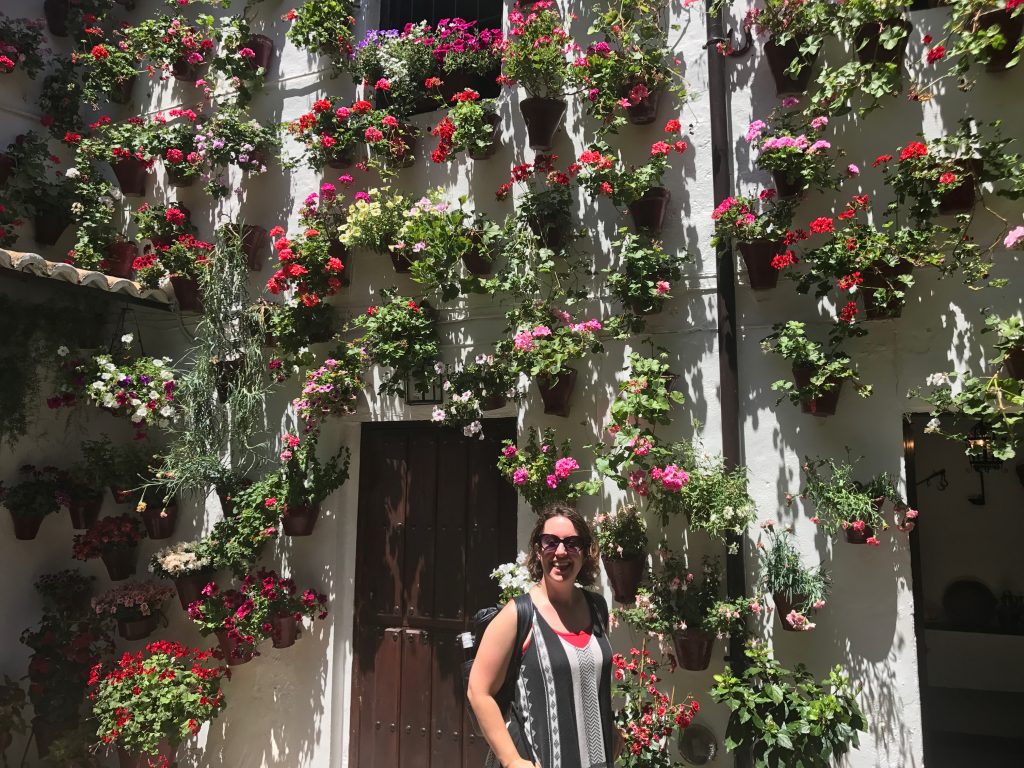 At times it seemed we couldn’t walk 10 feet without Dreamer asking Doer to pose for a picture or to photograph her.

And on top of all the photos, the lines to see some of the prize-winning patios in the historic Jewish Quarter were very long.

This made it almost impossible to walk down some of the streets. 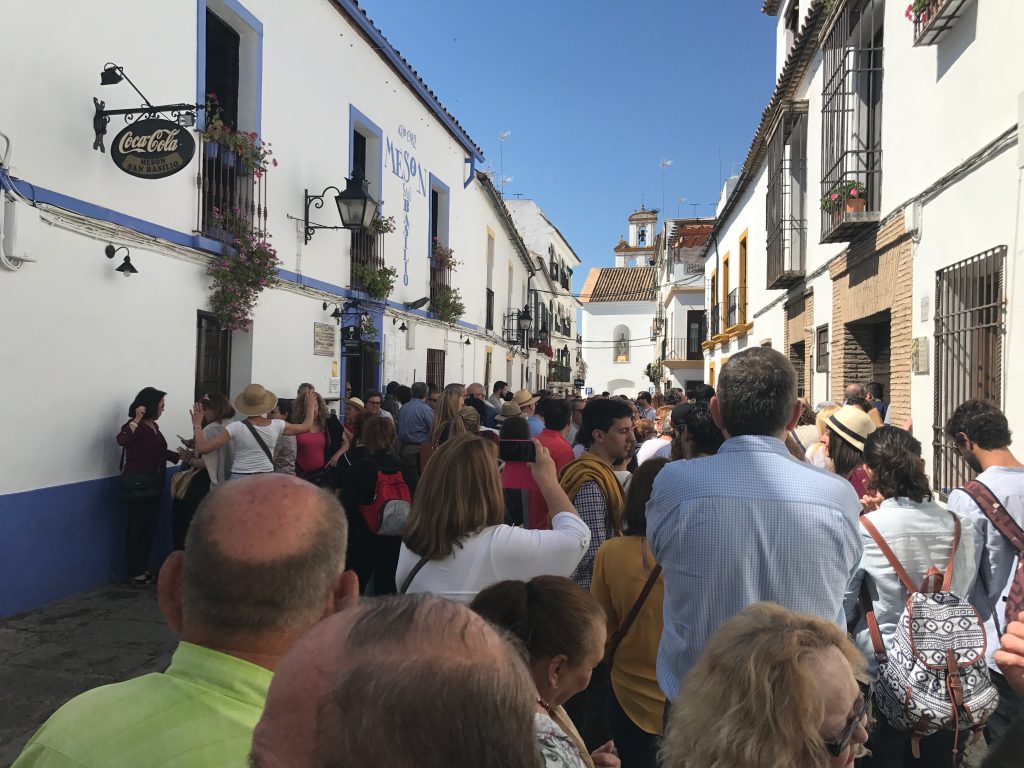 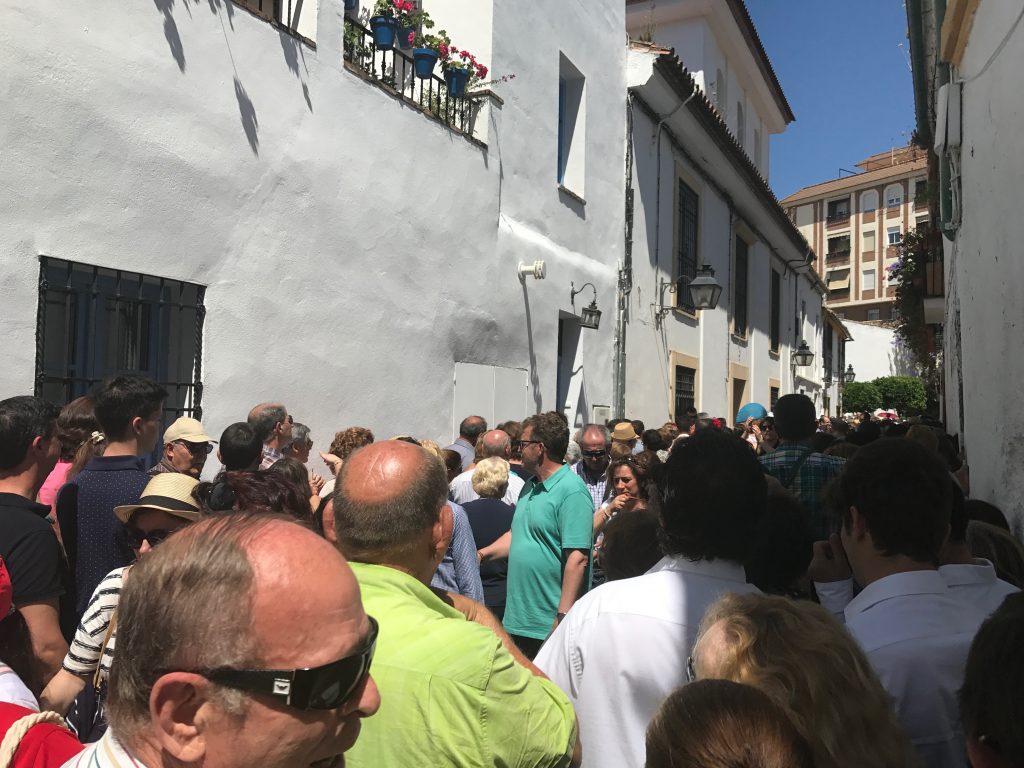 How to pass the time?

And this is how Spaniards wait:

Often it was difficult to get a picture without hordes of other people in it.

Finally, we’d had enough and decided to check out the patios in other, less popular neighborhoods.

And the patios were just as lovely – plus, look ma! No crowds! 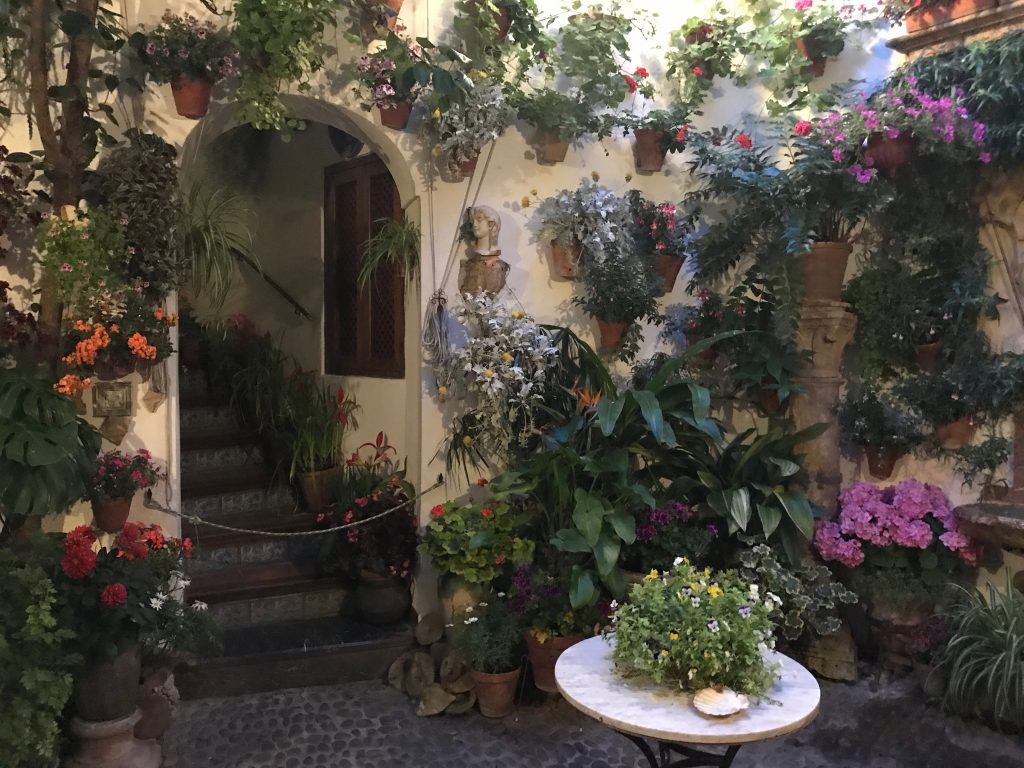 The coolest part is that people actually live in the houses connected to most of these patios.

Oftentimes you’d see a staircase ascending into the private home. 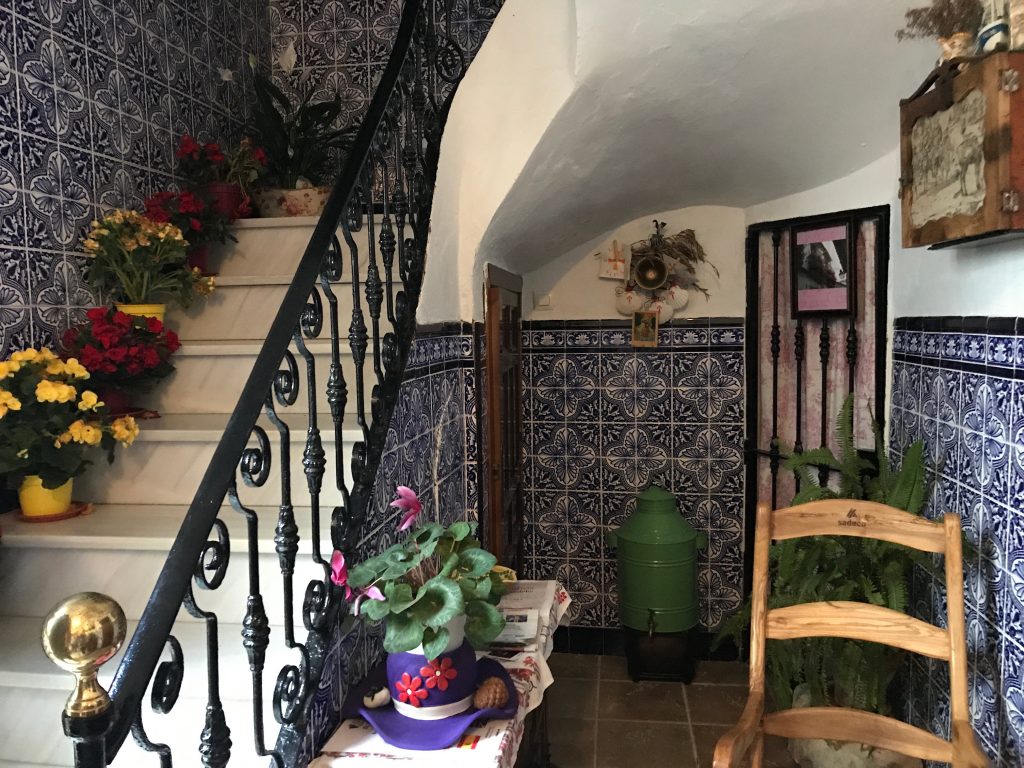 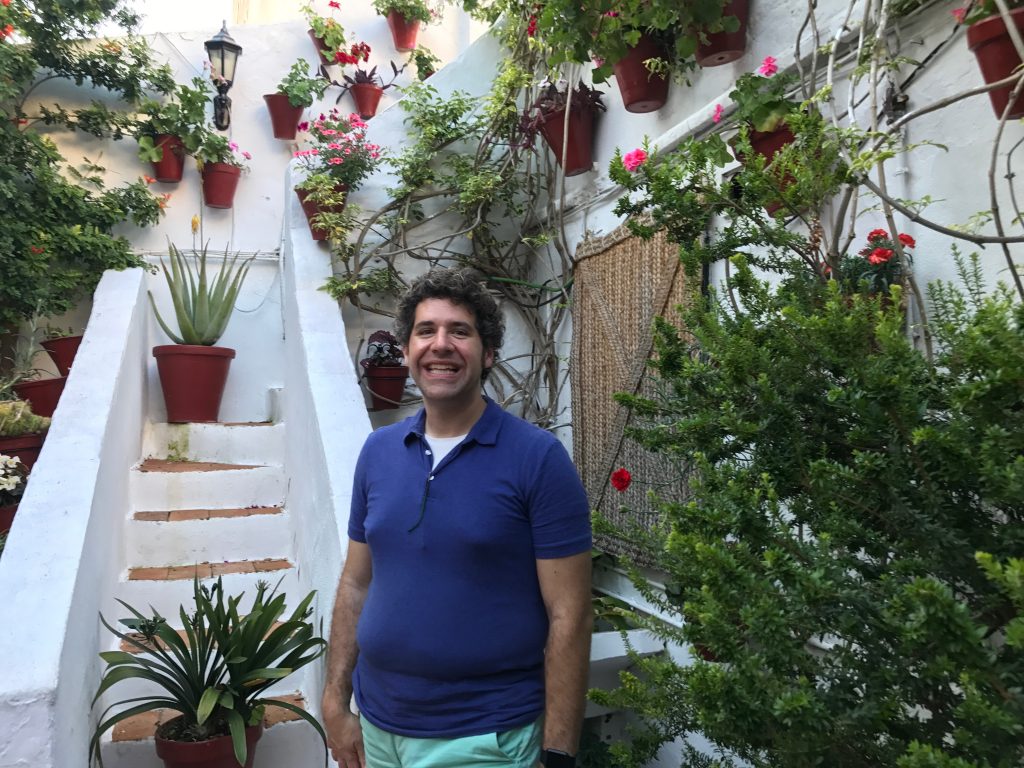 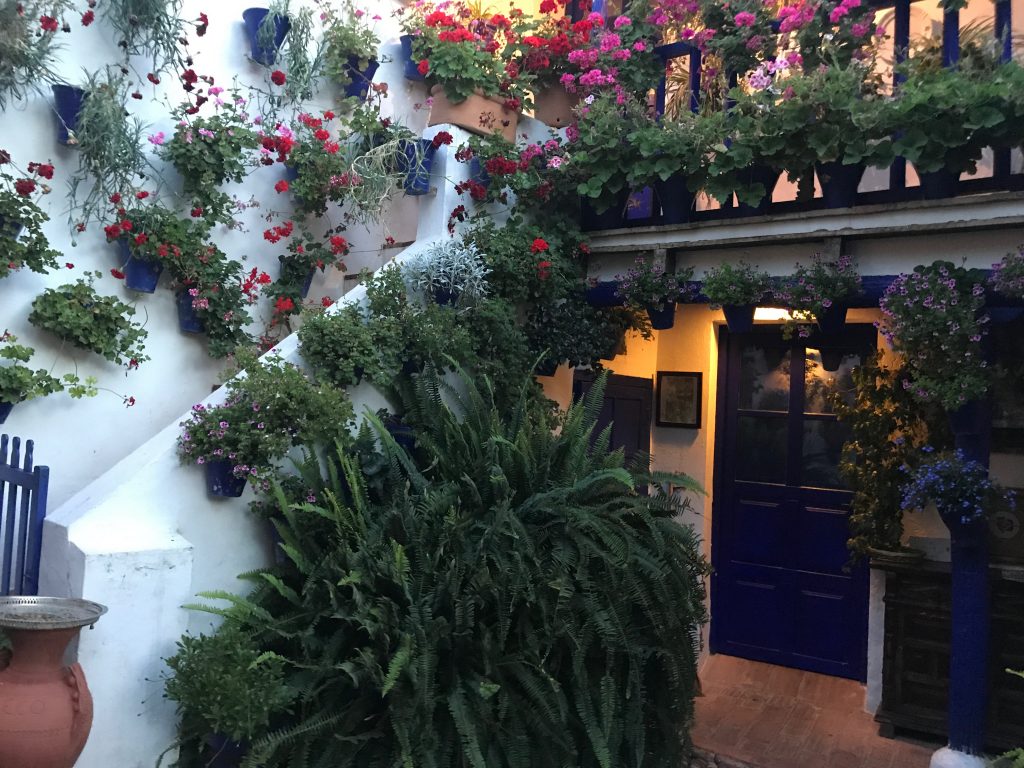 Yes, they are beautiful, but there is a lot of important history behind these courtyards as well. Remember the earlier part about UNESCO cultural heritage? The patios of Córdoba are a symbol of the city’s dedication to coexistence, community, and continuity. 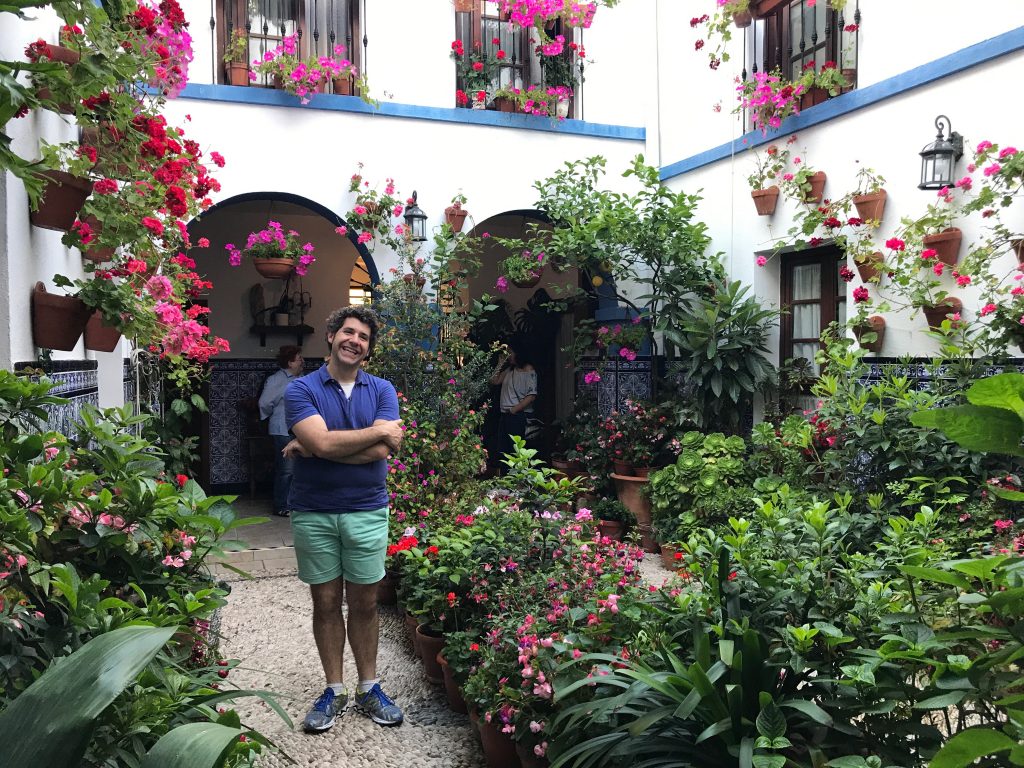 In addition to all its lovely courtyards, the second, quieter neighborhood we visited was also home to a patios interpretation center, where we learned a lot of historical context behind the festival.

When the Industrial Revolution came to Córdoba in the 19th Century, many people moved to the city, and often families rented a single room in a house. The rooms often were distributed around a central patio, where shared services such as toilets and kitchens were located.

Patios thus became a sort of extended living room, with different families cooperating in maintaining the patio as they came together as a community. Different holidays, festivals, and other occasions were celebrated in the city’s patios. 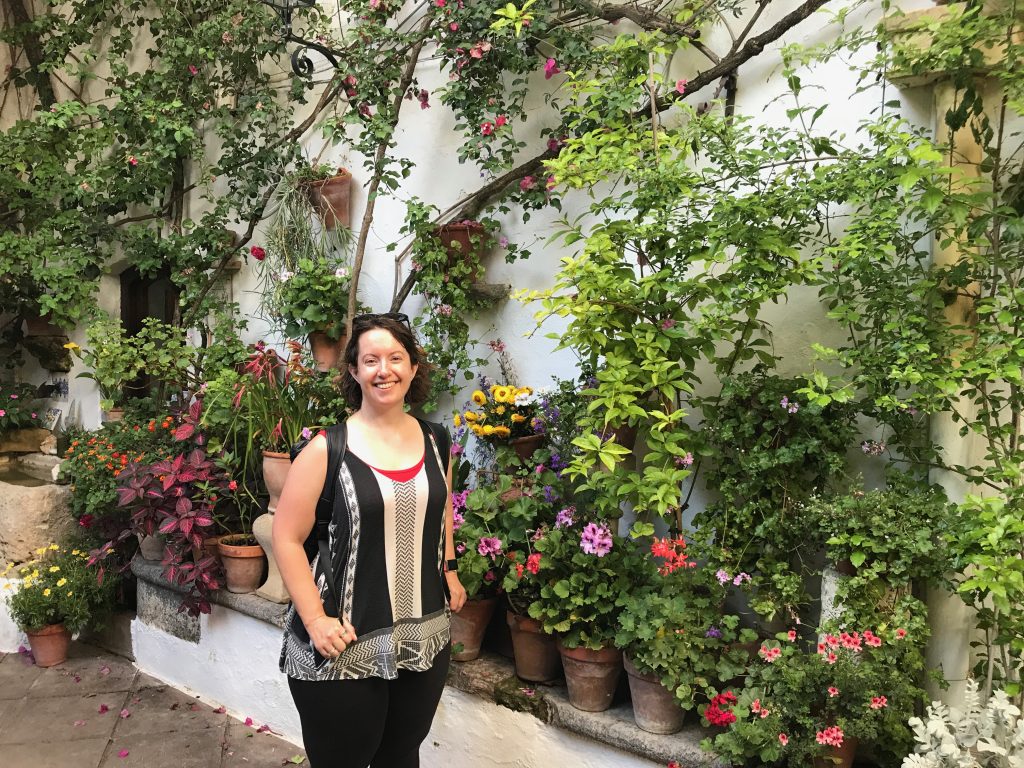 The feeling of community around the patios continues today, with families inviting the public into this part of their home during the festival.

People who take care of the patios know how the ideal positioning of plants, paired with efficient water usage, can help regulate the hot southern temperature. 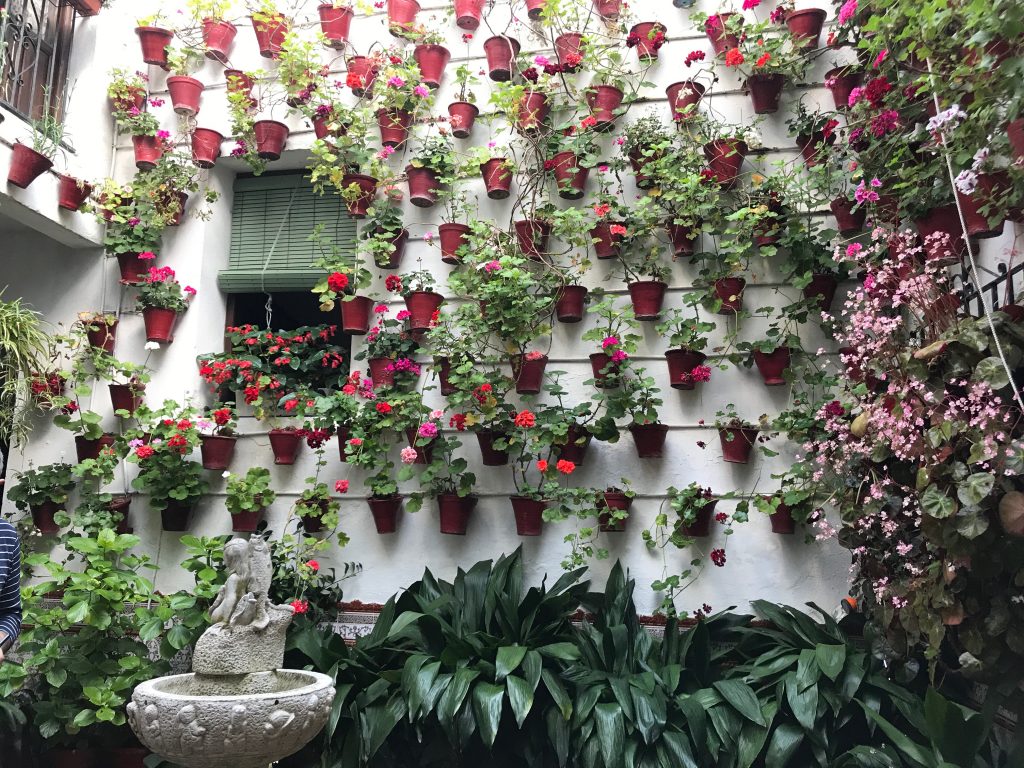 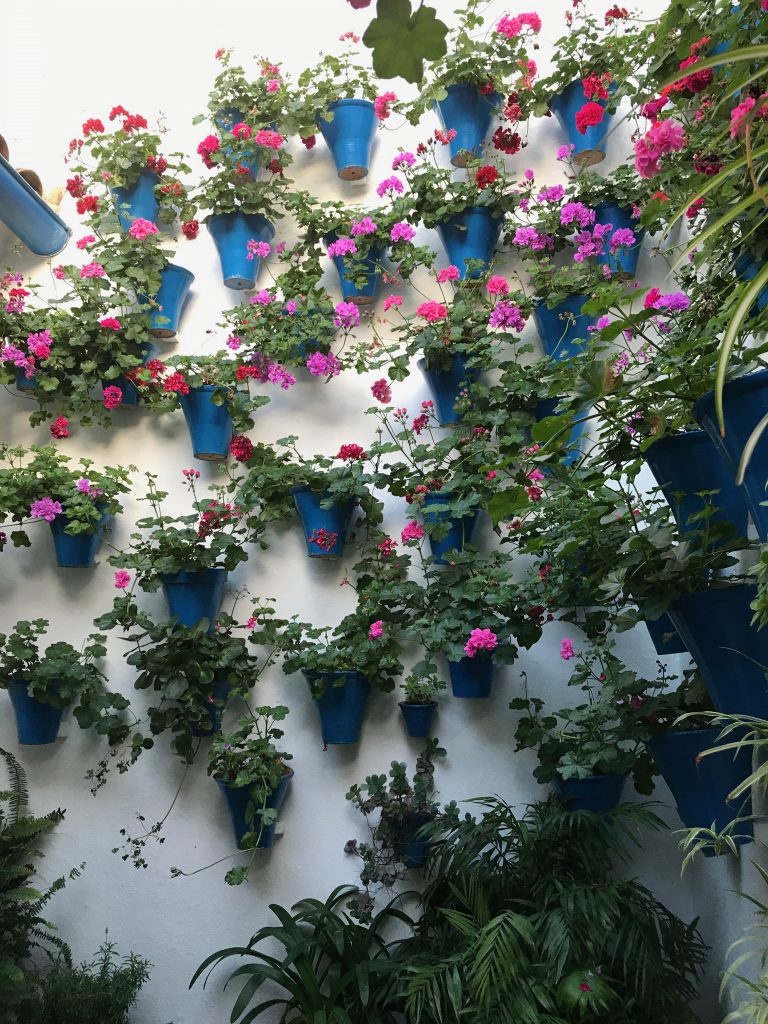 Patios also feature the use of natural materials and the reuse of household objects, paired with the proud display of traditional items. 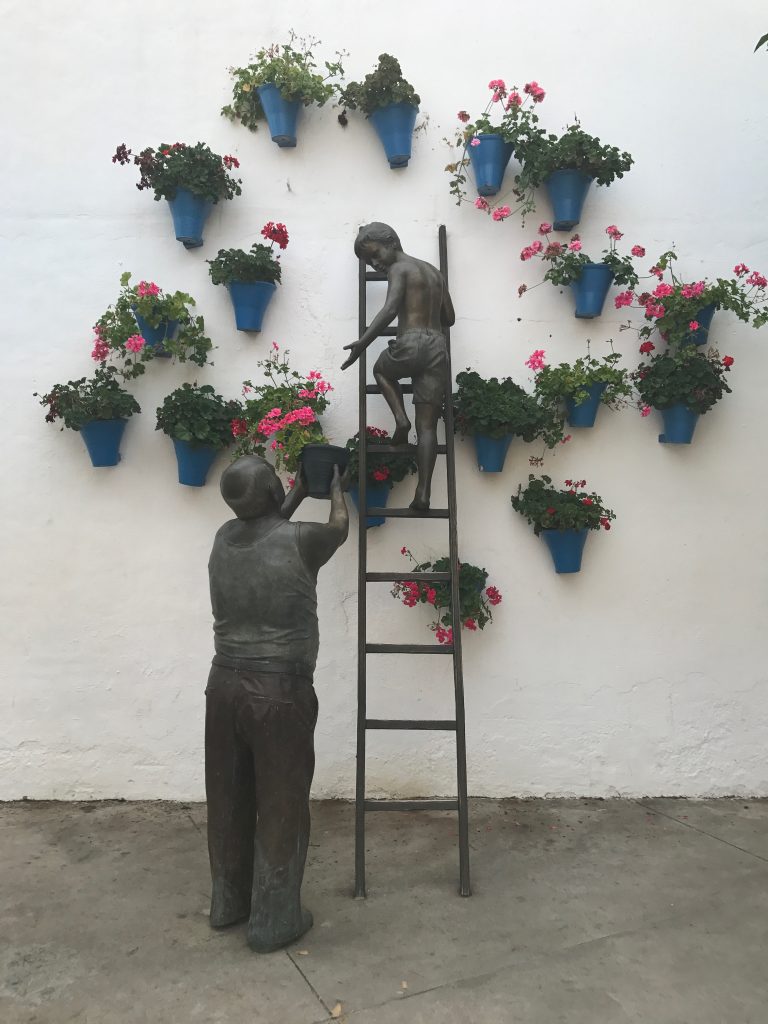 “This work of art is ephemeral; at the end of the festival, nature imposes her own timeline. The patio is left stripped of colour, smell, visual splendour, and once again beings [sic] a patient wait to repeat the same process derived from tradition the following year”

This idea reminded us of another ephemeral festival of great cultural importance – yes, it always seems to circle back to the Fallas. 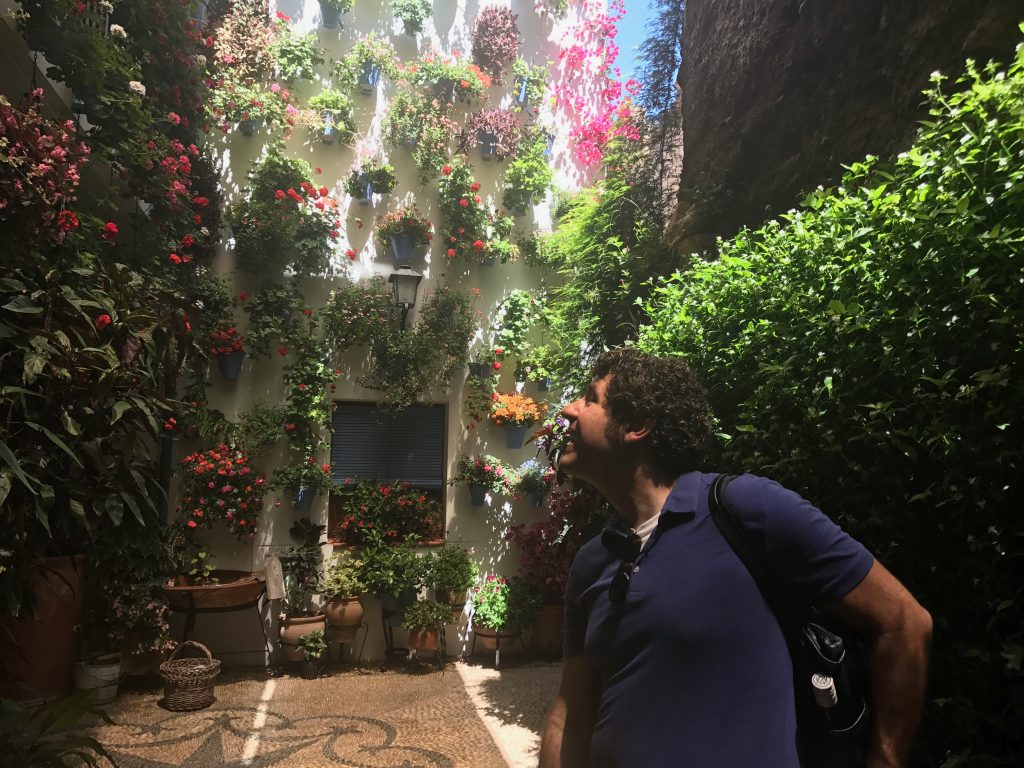 The first contest of decorated patios, balconies, and windows was held in 1921, a year after the local paper called for the defense of the patios in order to “conserve the essence of the city.” From 1925 to 1929, patios substituted the city’s annual May crosses celebration (the very same affair we’d recently witnessed in Burriana!). These days, the two festivals coexist. 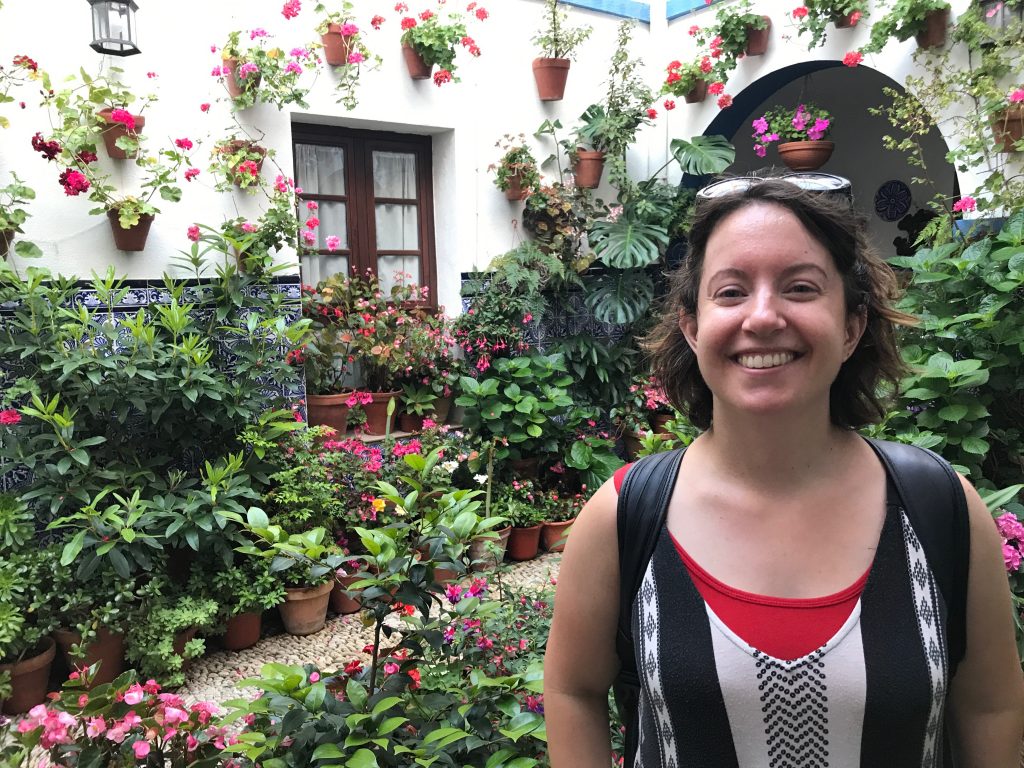 In the 1960s Spanish tourism campaigns promoted the image of Córdoba’s patios through photos, film, and other media. During this decade, the prize money for winning entries also increased substantially, as collaboration with local businesses encouraged more people to participate.

Doer liked the deep wells that were part of most patios, including this one at the patios museum. 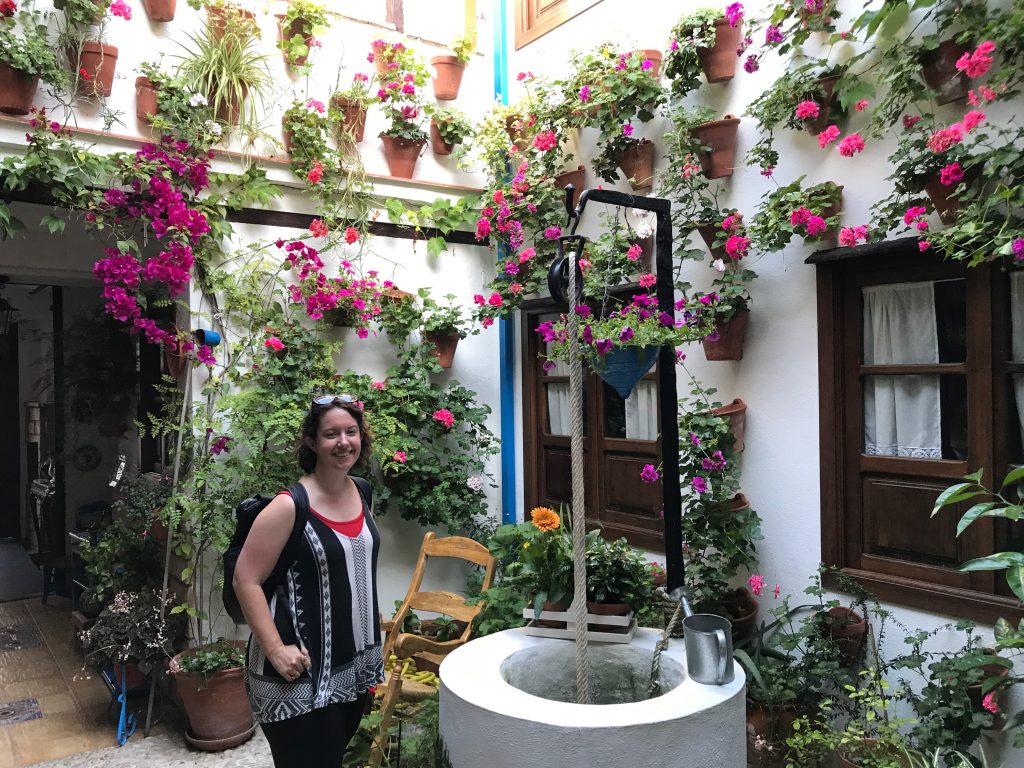 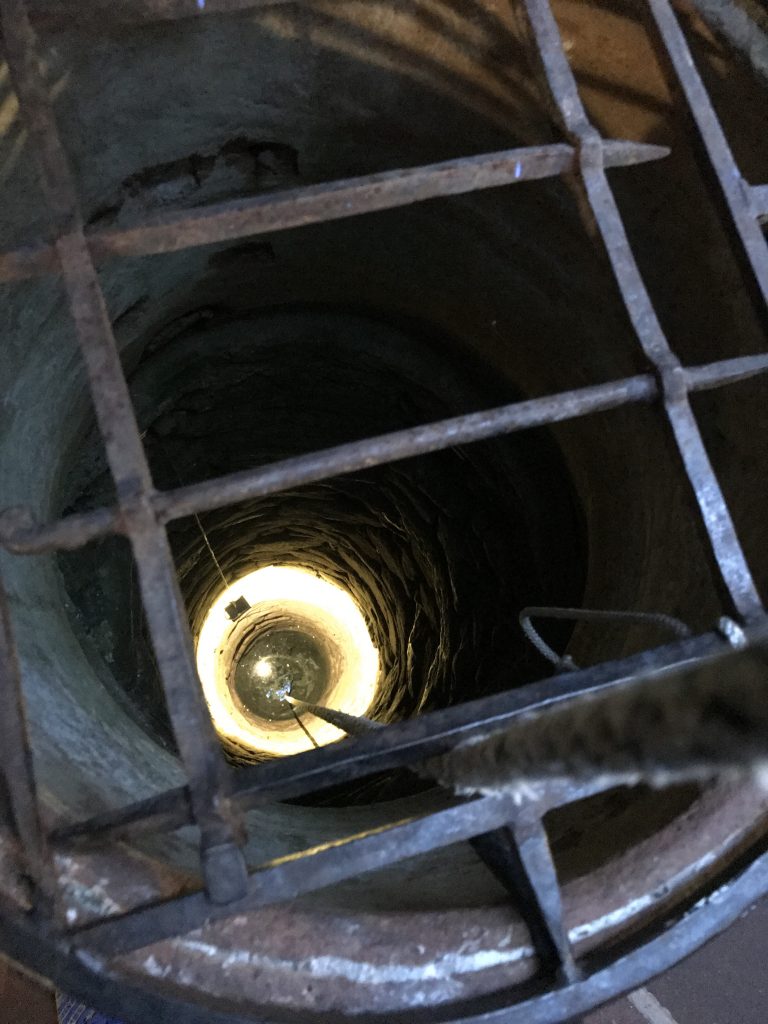 He also liked the shrimp plants. 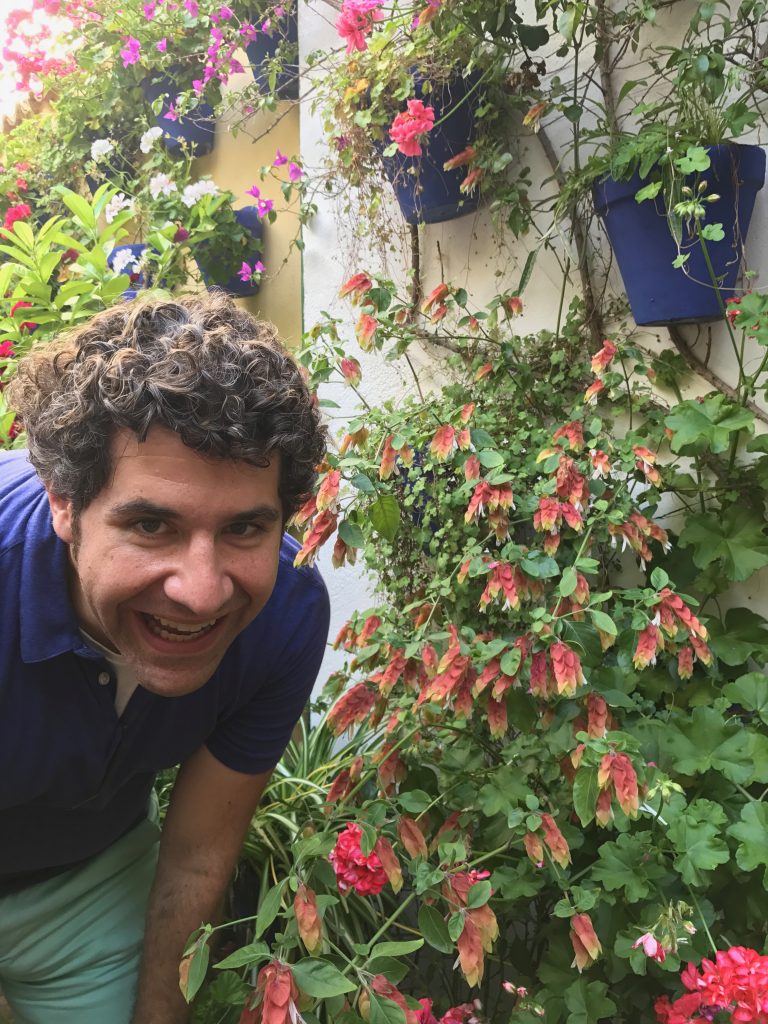 A few times, we did manage to get a photo together. 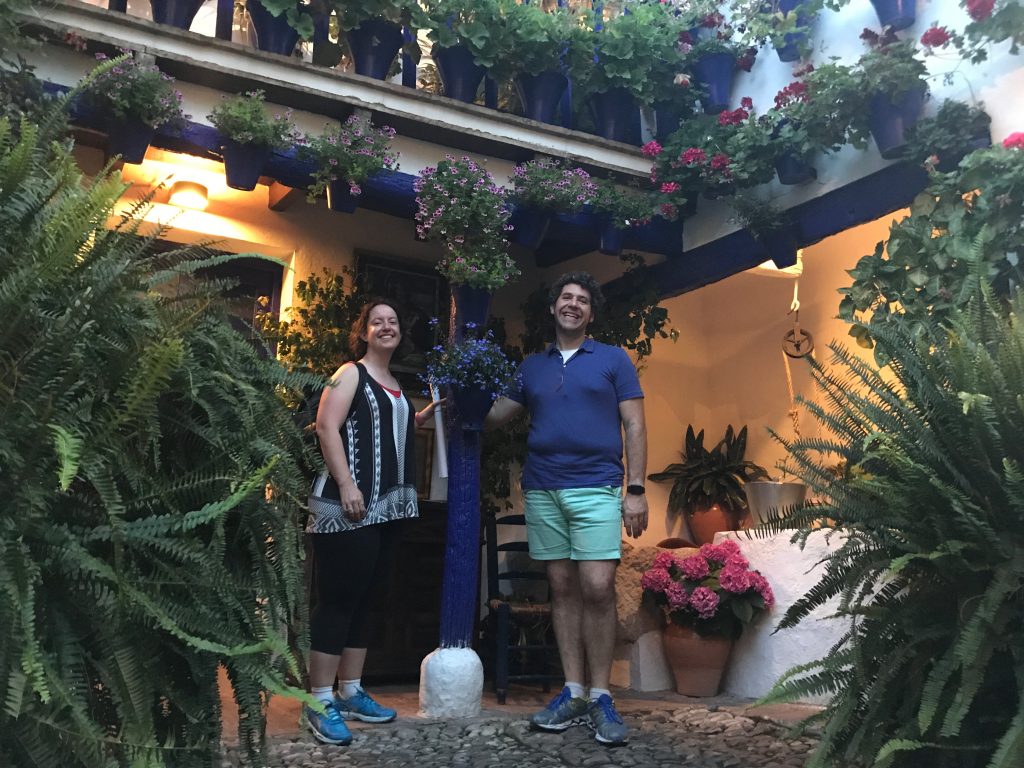 There’s more to this city than patios: flamenco, religious history (including some important Muslim and Jewish sites), and snails to eat! Next time we’ll feature the non-patios side of Córdoba.