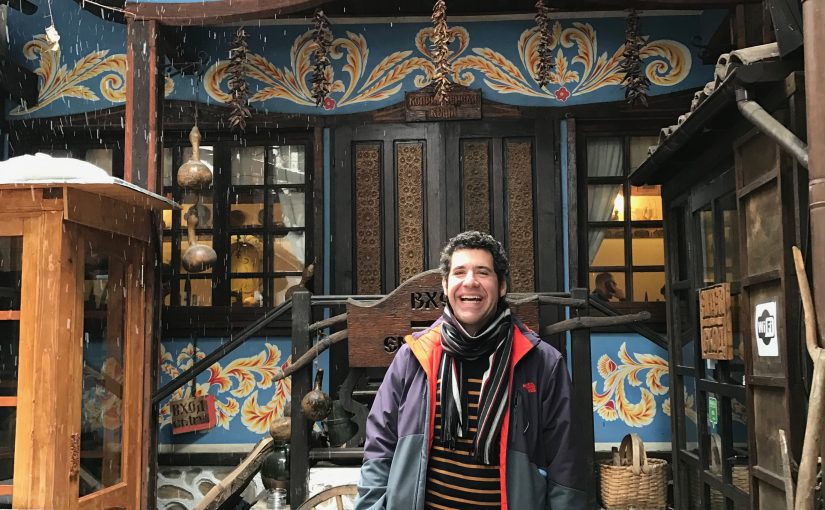 Aah, our province of Castellón de la Plana… home to a bona fide airport, as we learned after a little research once we were placed. Only one problem: locals told us when we got here it was a fiasco, never opened, a model of government corruption and excess. We’ve been flying from the much larger Valencia airport since we arrived.

So imagine our surprise when, driving around one day, we saw exit signs on the highway for the airport. A little more research was in order!

Turns out, the airport did actually open. And you can fly to a whopping four destinations from there – but not on the same days of the week, of course. You can read all about the storied history here.

With a January weekend approaching and no plans on the books, Dreamer and I solicited ideas from each other. She picked some cities in Spain that would be moderately difficult to get to via car or train, and I picked the craziest-sounding destination of the four flights offered from Castellón.

It took some convincing, but finally Dreamer agreed to hear me out on Sofia, capital of Bulgaria. Tickets on RyanAir were just 10 euros each way; the private bus from the Castellón train station to the airport in the middle of nowhere cost more than that! So, it was set: an easy weekend
getaway. 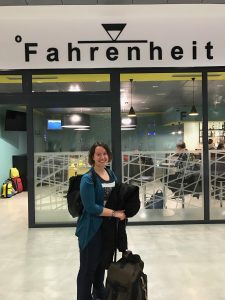 After dealing with about two hours of travel on regional train and then the aforementioned bus to the airport, we arrived to find pretty much exactly what we expected. This place makes the Lincoln airport look big! But get us to Bulgaria they did.

With two hours between the bus drop-off and our flight, we settled down at one of the airport’s two (!) restaurants. An enterprising couple of British expats opened both just a few weeks earlier, finding a captive audience and an airport whose traffic will hopefully only grow. And of course those Brits got rather cheeky in naming their businesses: °Celsius is the restaurant before security; °Fahrenheit, after.

After a thankfully uneventful flight out, we landed in Sofia to find… snow! Living in a Mediterranean climate, it is easy to forget about such things, even when Nebraska friends are nice enough to mention them to us over the phone.

Here, the snow could not be ignored and, in fact, we quickly found a problem: neither of us had brought anything but a pair of tennis shoes. Also, Bulgarians aren’t really into scooping their sidewalks. Luckily, with the current exchange rate, things are rather cheap in the Land of the Leva and we each got a nice pairs of boots out of this trip. That ate into the ticket savings a bit, though.

First things first: with the short notice planning this trip, we didn’t get to learn any basics in the Bulgarian language. This lady to the rescue – blagodarya!

It was tough the whole time basically feeling illiterate, though. Neither of us reads Cyrillic so we really couldn’t even sound out words unless they were written in the Latin alphabet first (as on the metro signs and such). This was a rather new experience for us in a foreign country.

Our first order of business: the Communist Museum. 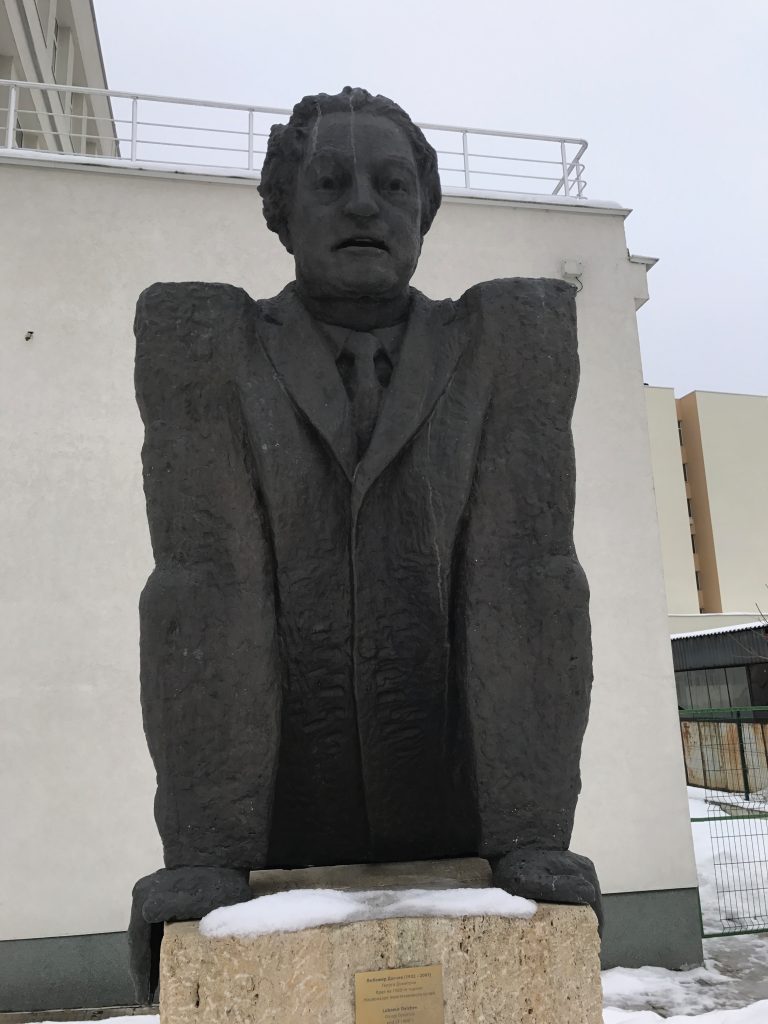 This building used to be the communist party headquarters. When the USSR fell and the star was taken down, people were shocked to find it was made out of regular plastic and not rubies.

Sofia is built upon the ancient Thracian city of Serdica. This became especially evident when they started construction on a new metro line in 2012 and discovered some serious remains in the center. Construction was halted, tunnel plans modified, and a free public museum built around the ruins. It’s pretty cool.

Alas, this is common in Sofia, where you can’t throw… er, bury a stick without digging up something ancient.

Out in front of the Governor’s residence, there are some funny- but serious-looking guards. 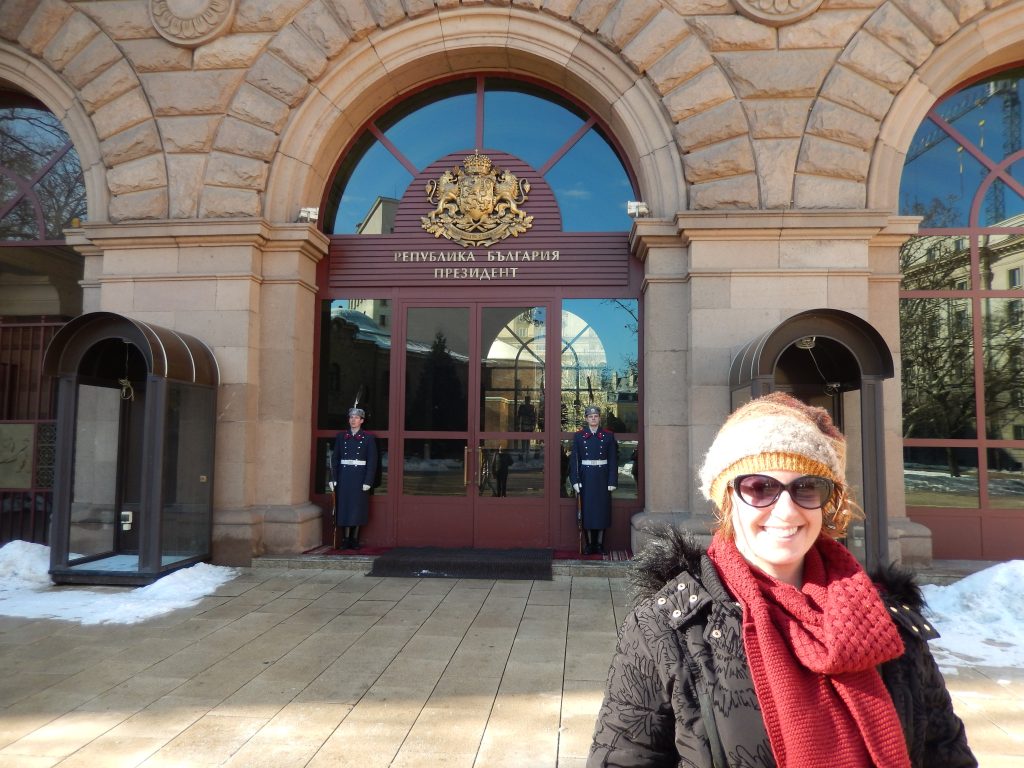 Of course, with so much history here, it should not be surprising that there are some great old churches.

This modern statue sits at the city center. 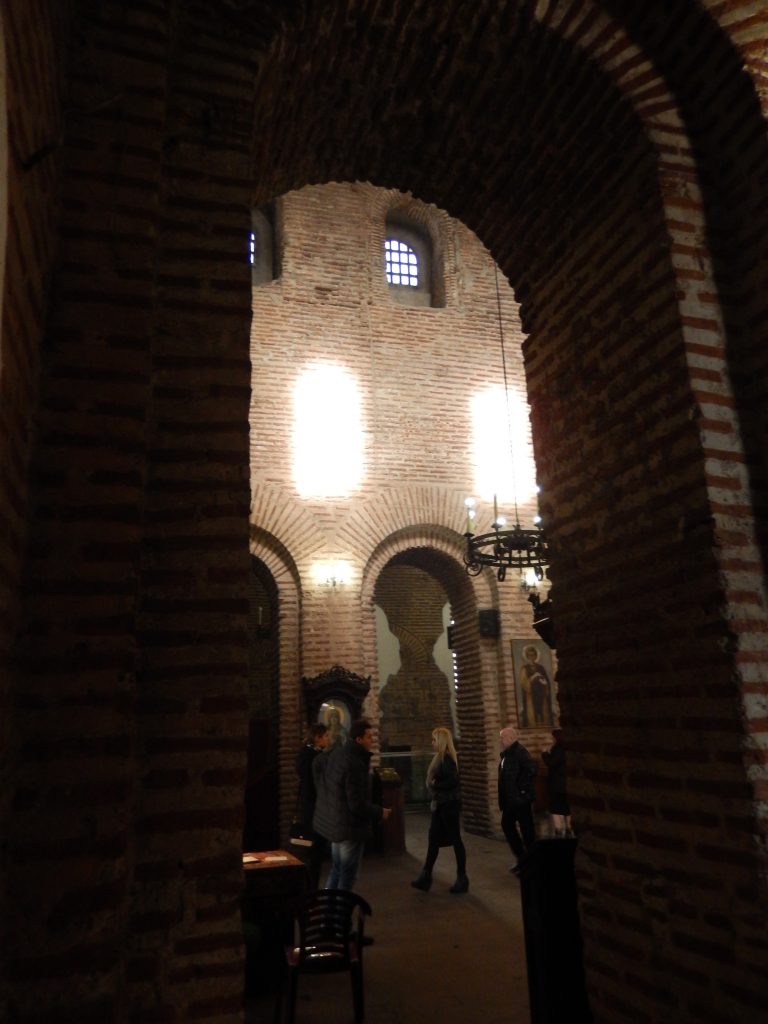 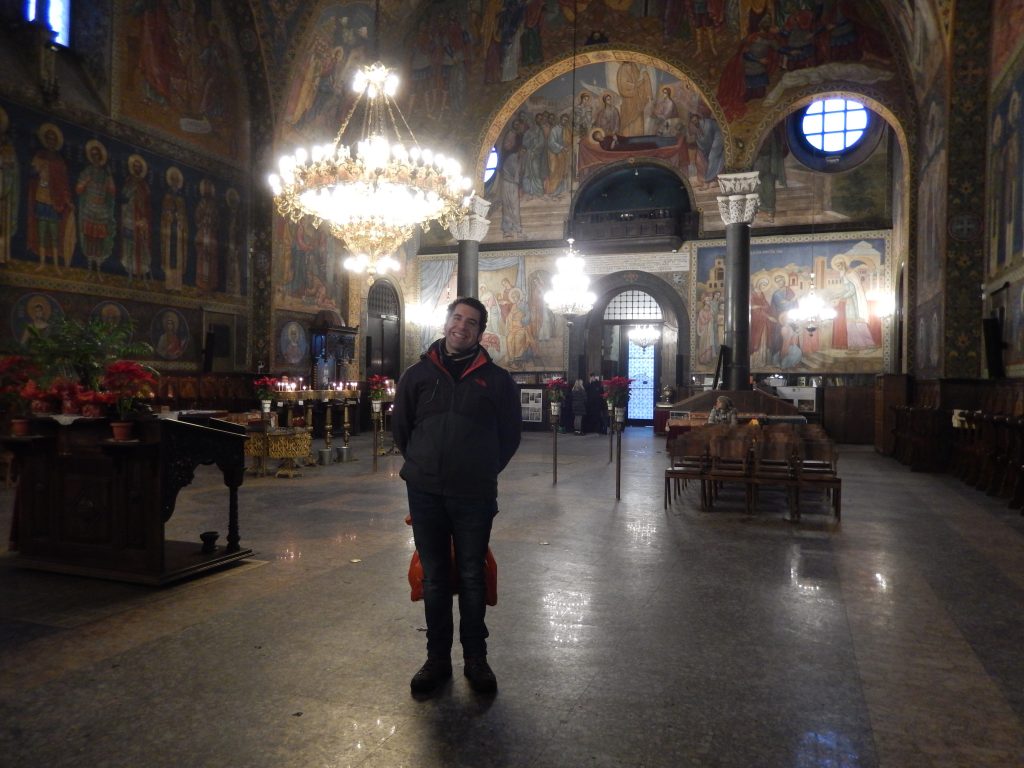 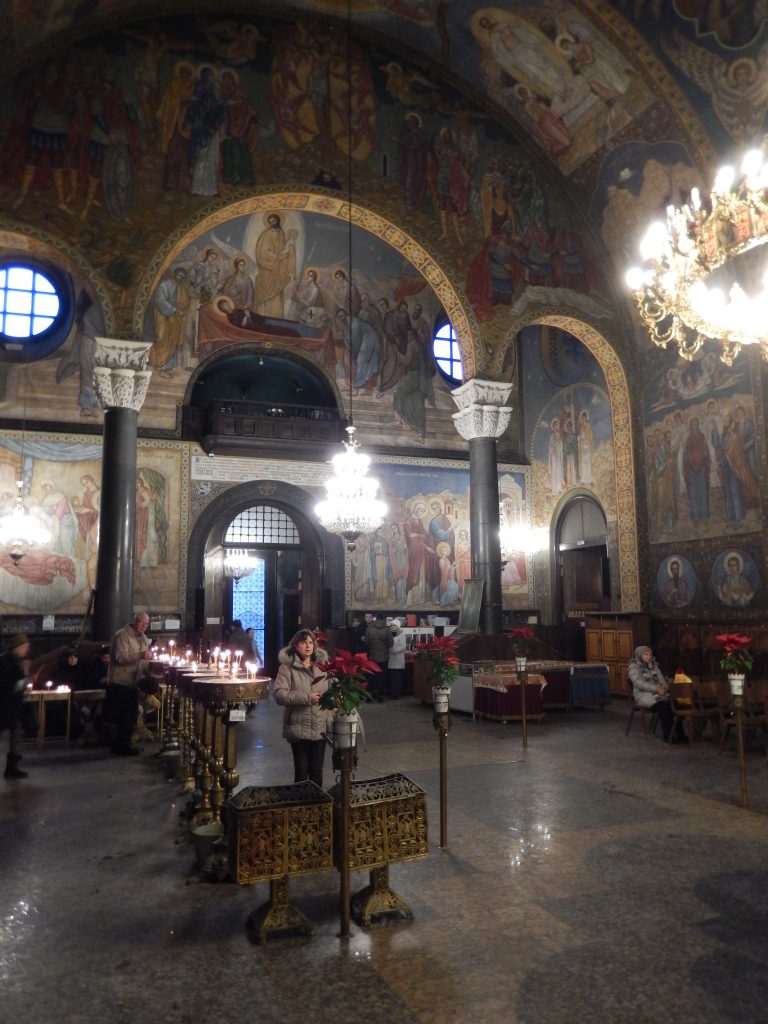 Dreamer also couldn’t resist going to the basement of The Russian Church and asking St. Nicholas the Miracle-Maker to grant her wishes. It was quite a sight, though unfortunately photos were not allowed. An entire room outside the crypt is full of tables and people writing on slips of paper, then (some very emotional) people line up – one at a time – to take their wishes up to the tomb.

So… old churches, yes. What may surprise you, though, is the number of religious institutions here that are not churches, but in close proximity to them. Omaha was in fact not first in having a Synagogue, Mosque, and Church together on the same campus. 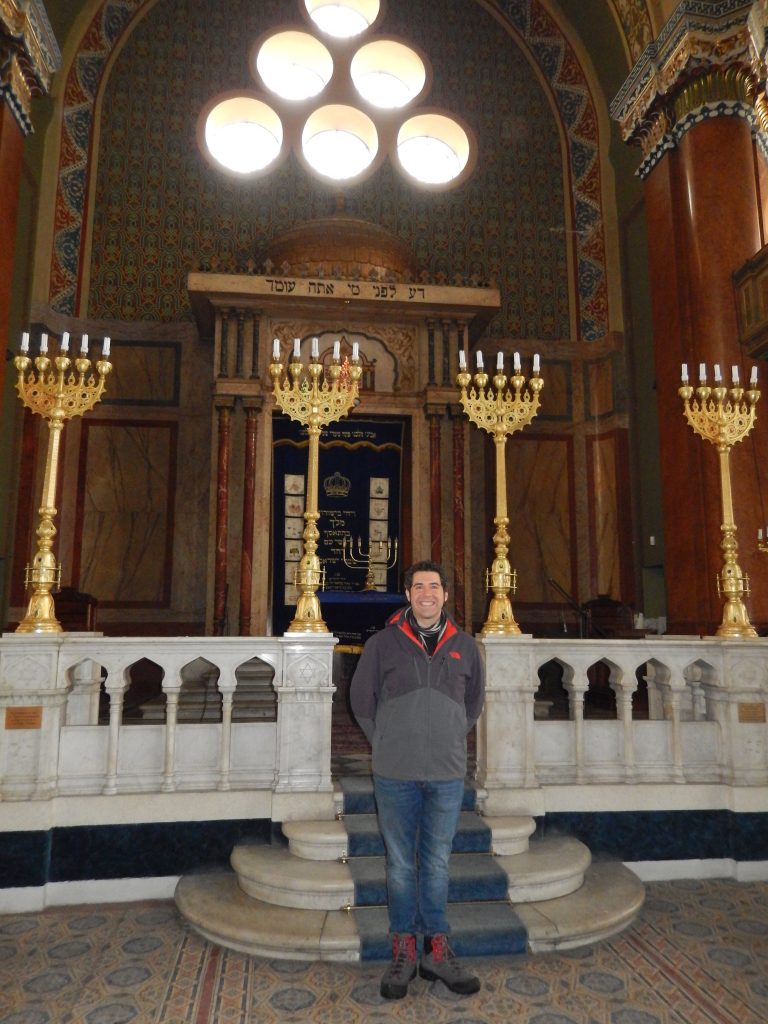 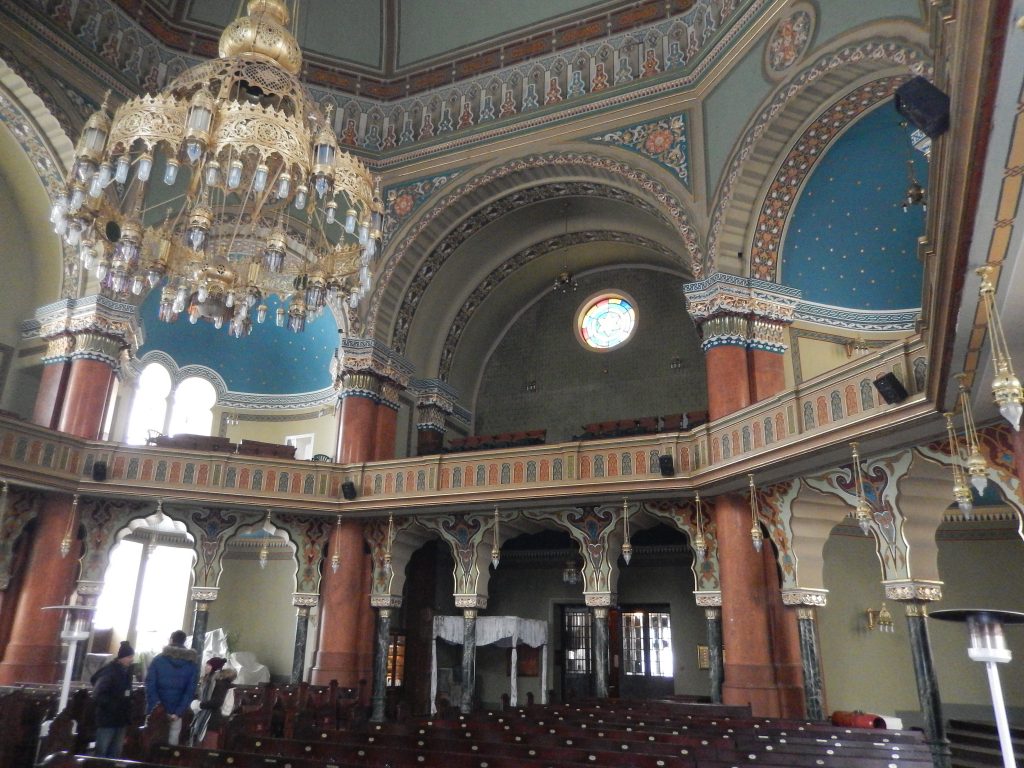 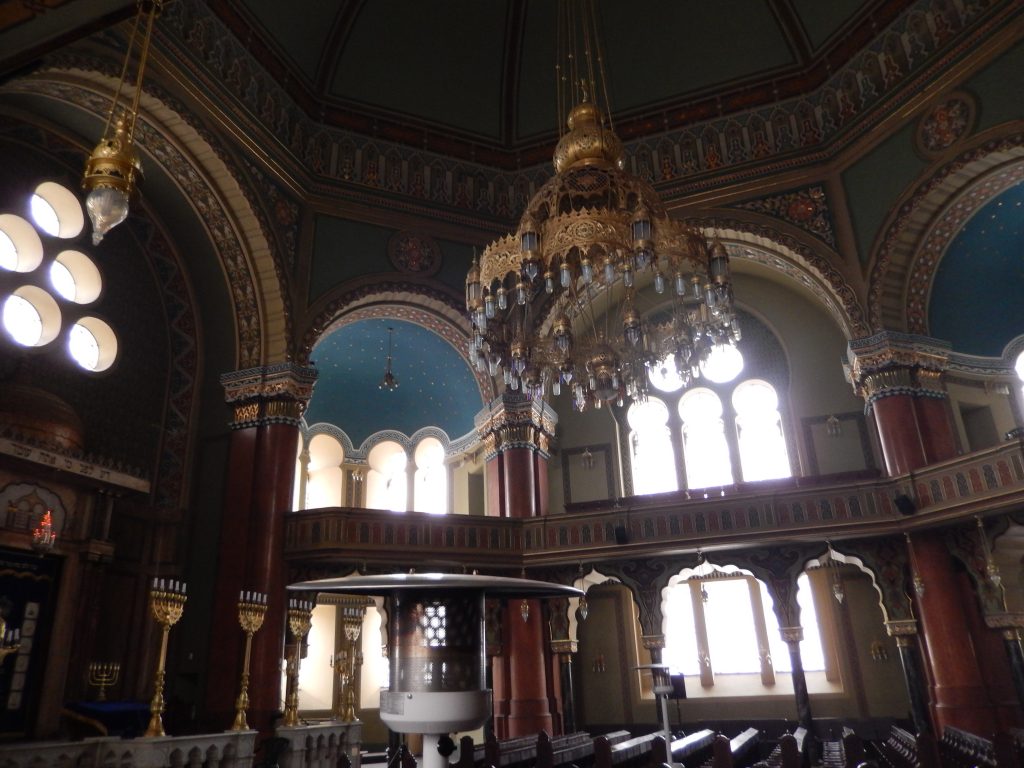 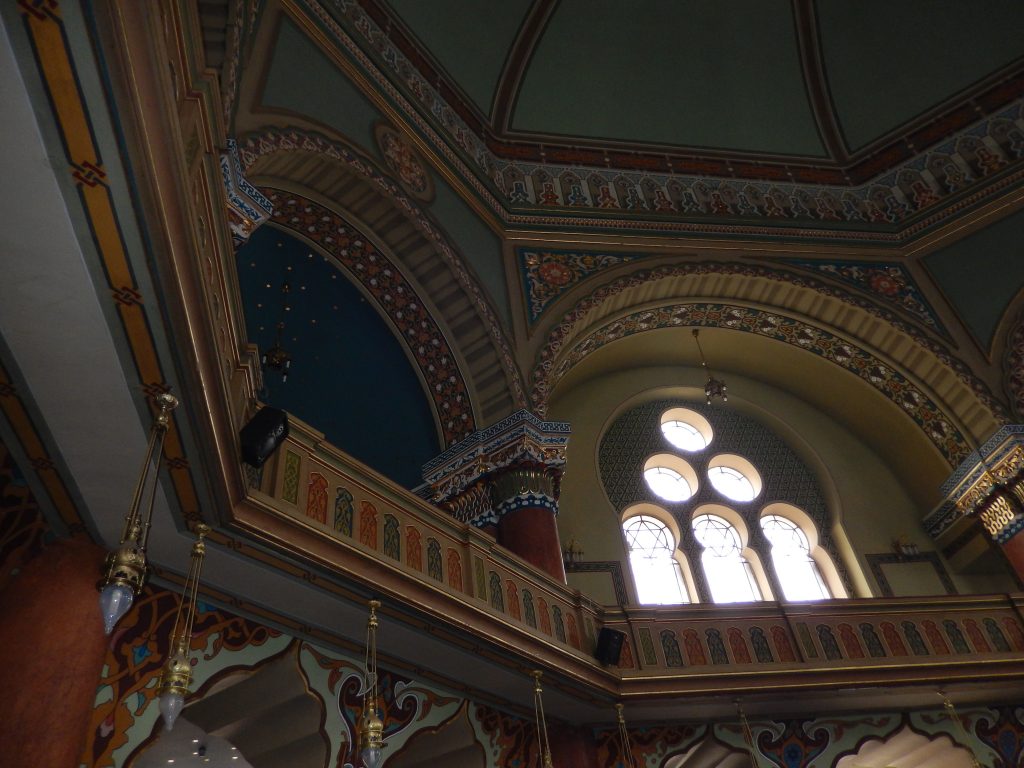 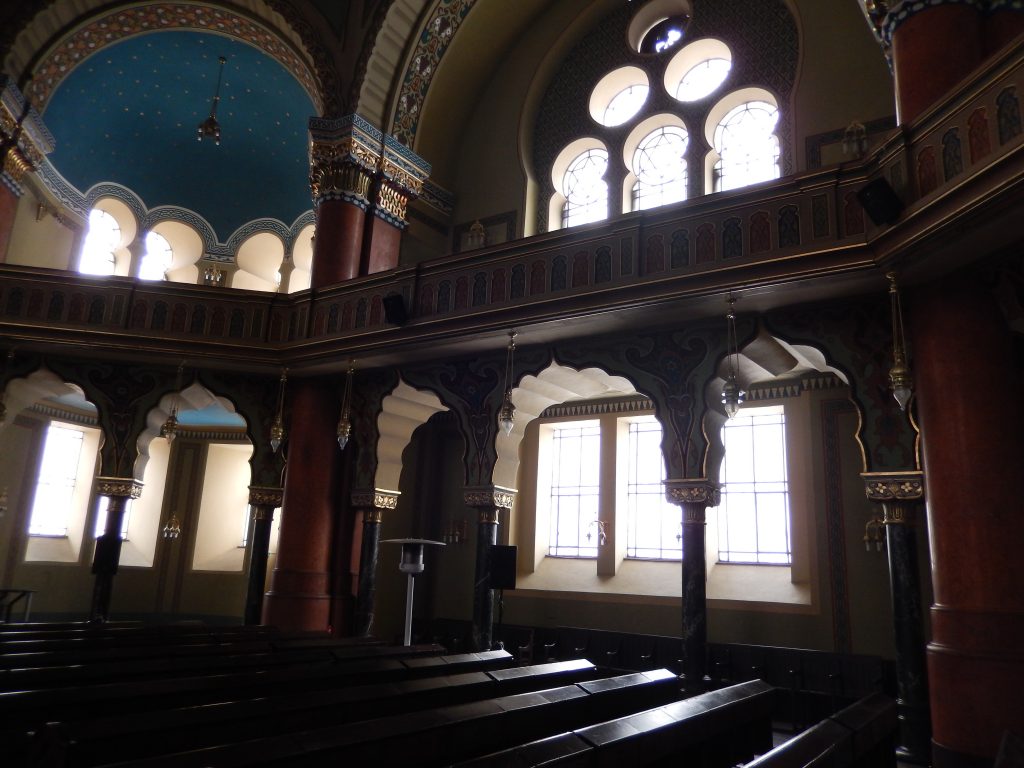 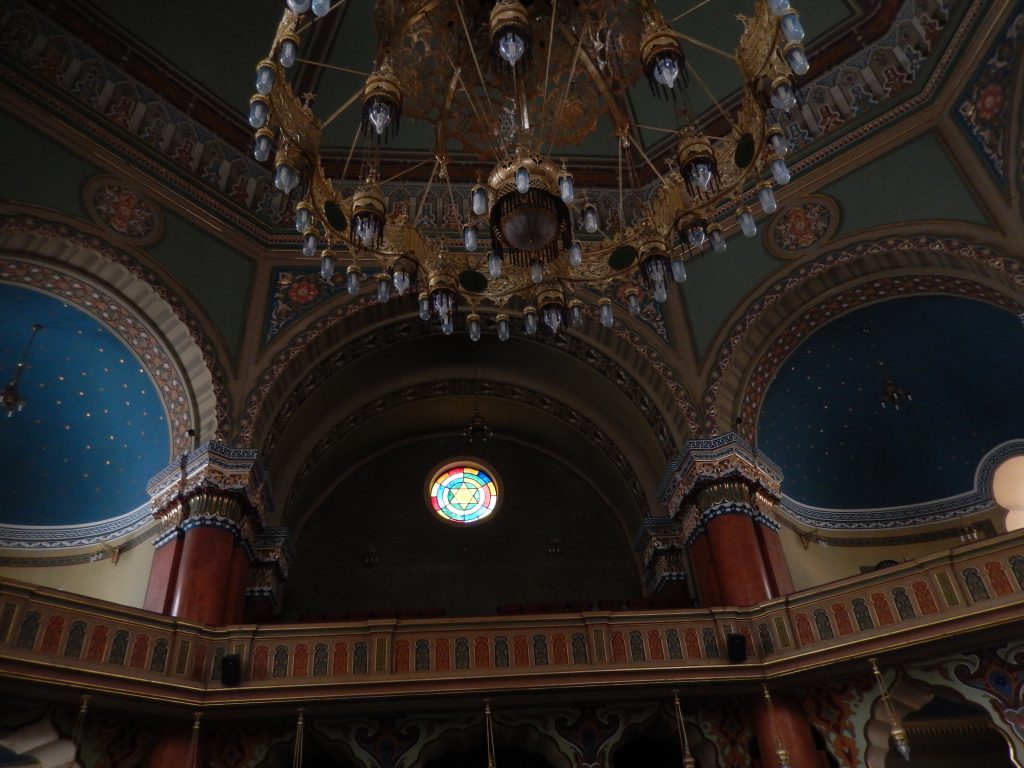 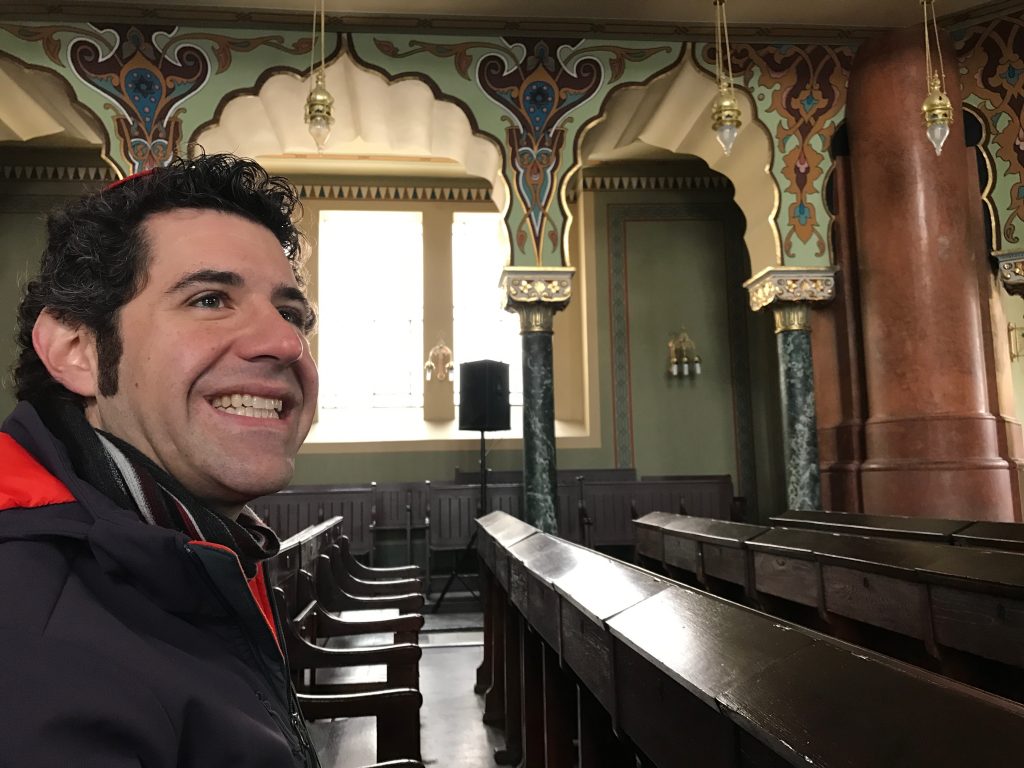 We also visited the Jewish Museum, which is attached to the Synagogue. Purportedly very little of Bulgaria’s Jewish population perished during WWII, but many did move to Israel shortly thereafter. From a population of 50,000+, all of Bulgaria is down to about 6,000 Jews today and this synagogue has to share a Rabbi with other communities.

We were even more impressed with the 16th-century mosque. Having never been inside one before, we were both struck by its beauty, altogether different than the other religious buildings up to this point. This remains the only mosque in Sofia. 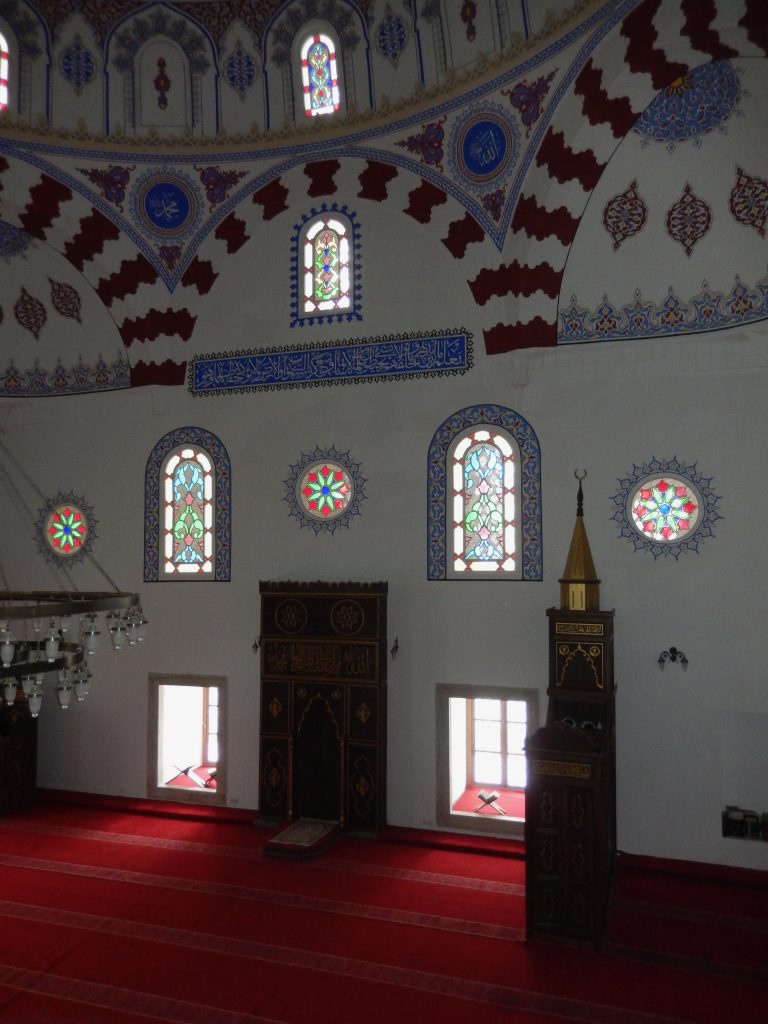 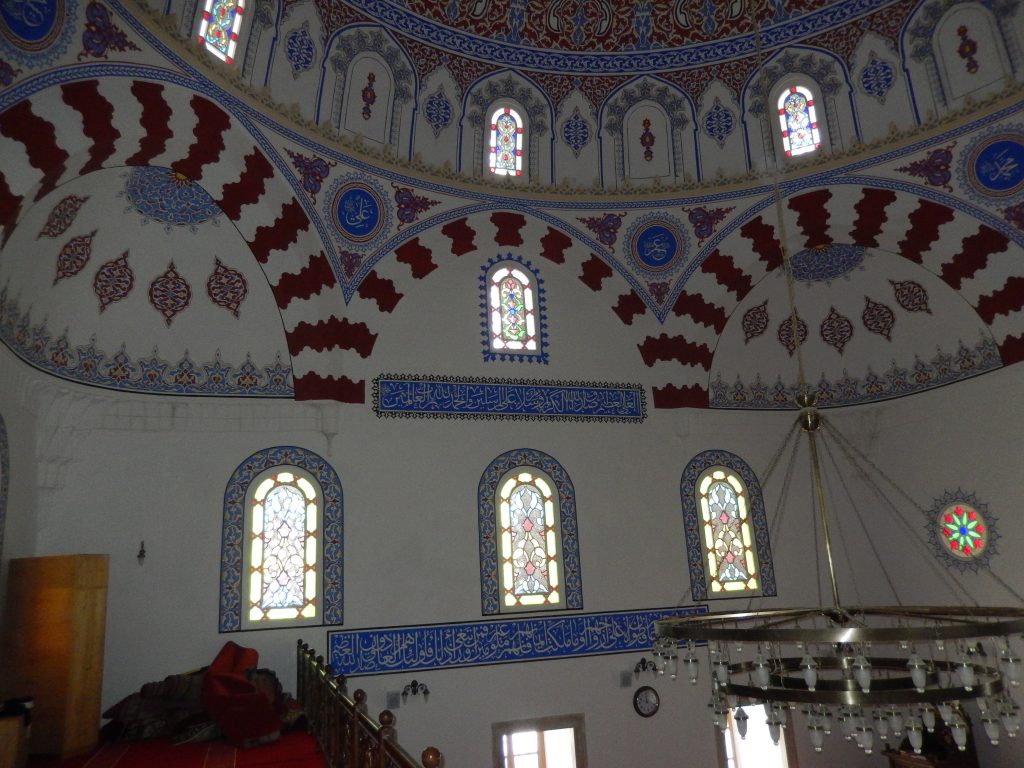 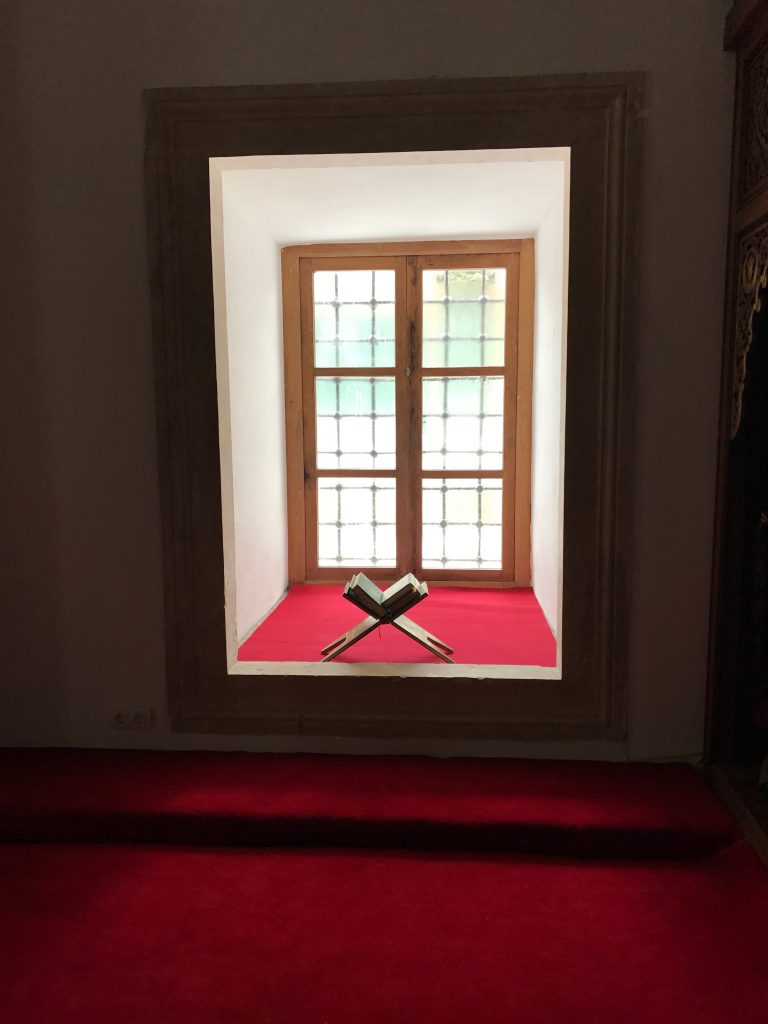 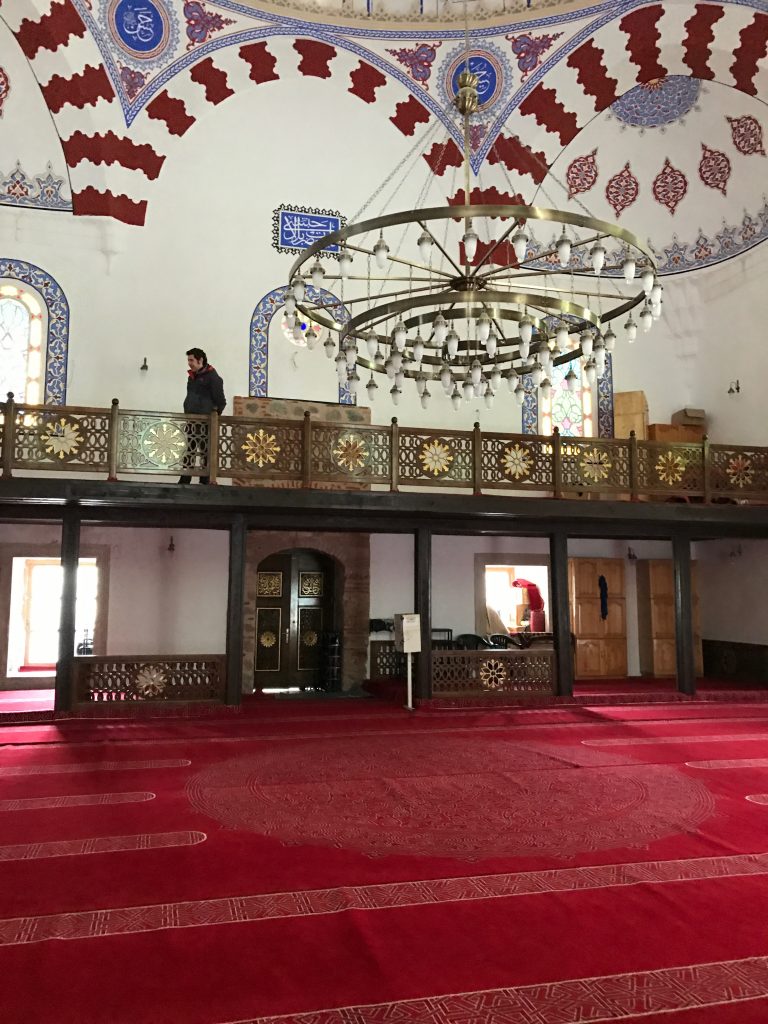 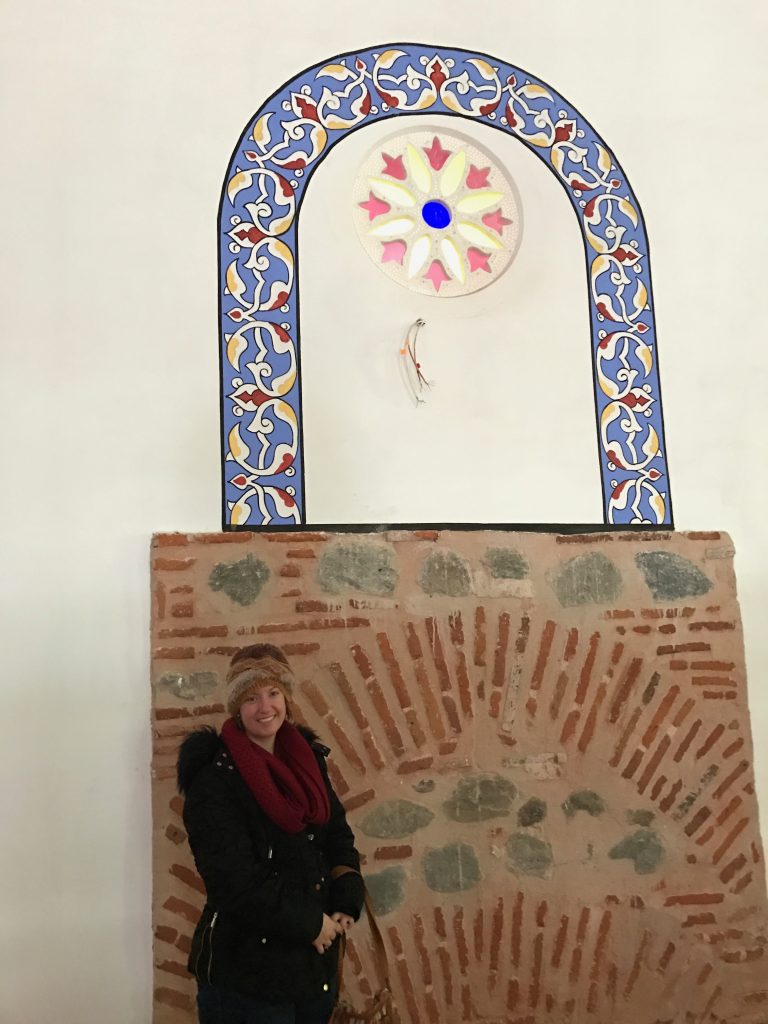 The food was excellent as well. Just maybe not this salted yogurt drink (Ayran) that Dreamer was super stoked about. I didn’t mind it – and, in fact, have developed a bit of a taste for it since.

The central market was a fun experience. I’d describe all the foods I tried if I knew what they were called.

On our last day, at our last meal, we finally found the authentic Bulgarian restaurant of my dreams. Everything was just extraordinary and I’d love to have ten meals here to try everything on the giant menu. Seriously, it was in a hardcover book.

We even had a snack at a hotel that used Micros 3700… in Cyrillic… with an old-school slip printer! 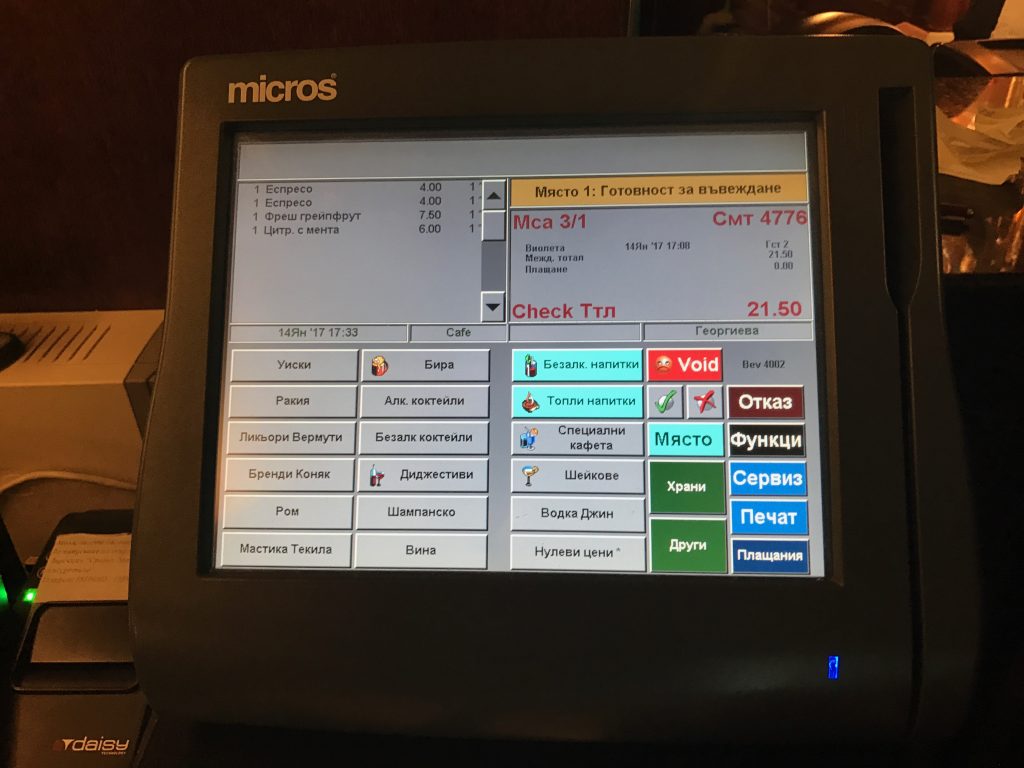 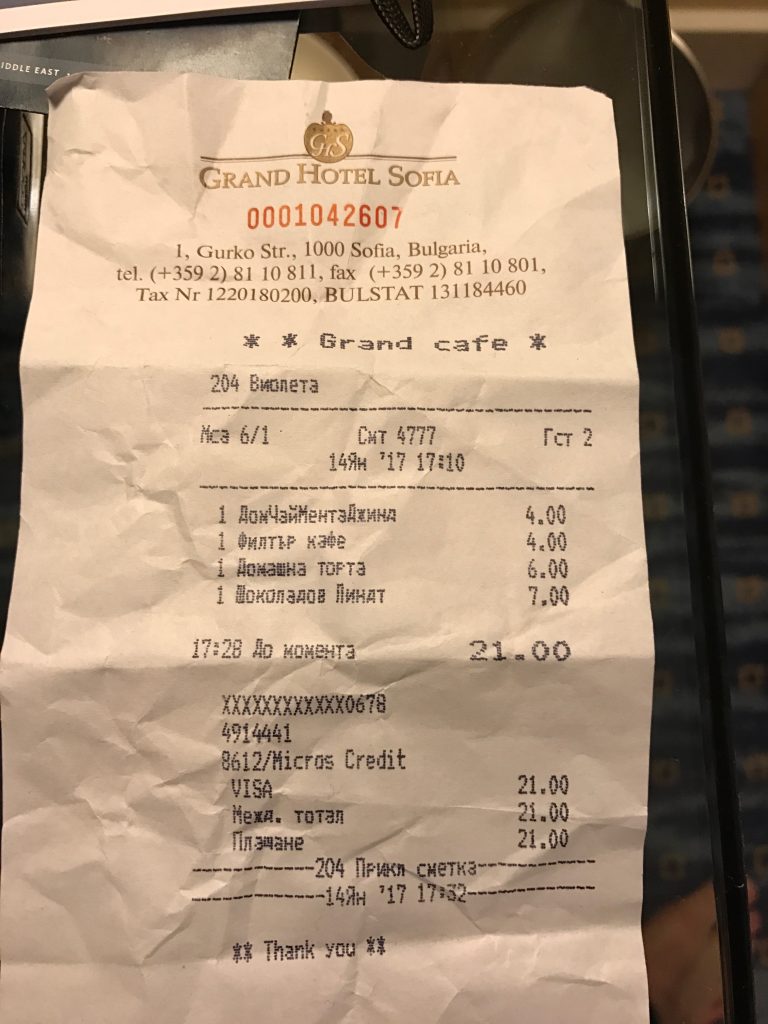 Bulgaria for us quickly went from “that awesome ethnic food we tried on our last trip to Chicago” to somewhere with plenty of fun things to do, eat, and experience. The true test at the end of our three-day weekend trips is always how much stuff went unseen. While there are places we leave without a desire to return, this was not one of those occasions. We already have a to do list for some future trip with everything we didn’t get to do this time. Our only requirement is a bit warmer weather next time! 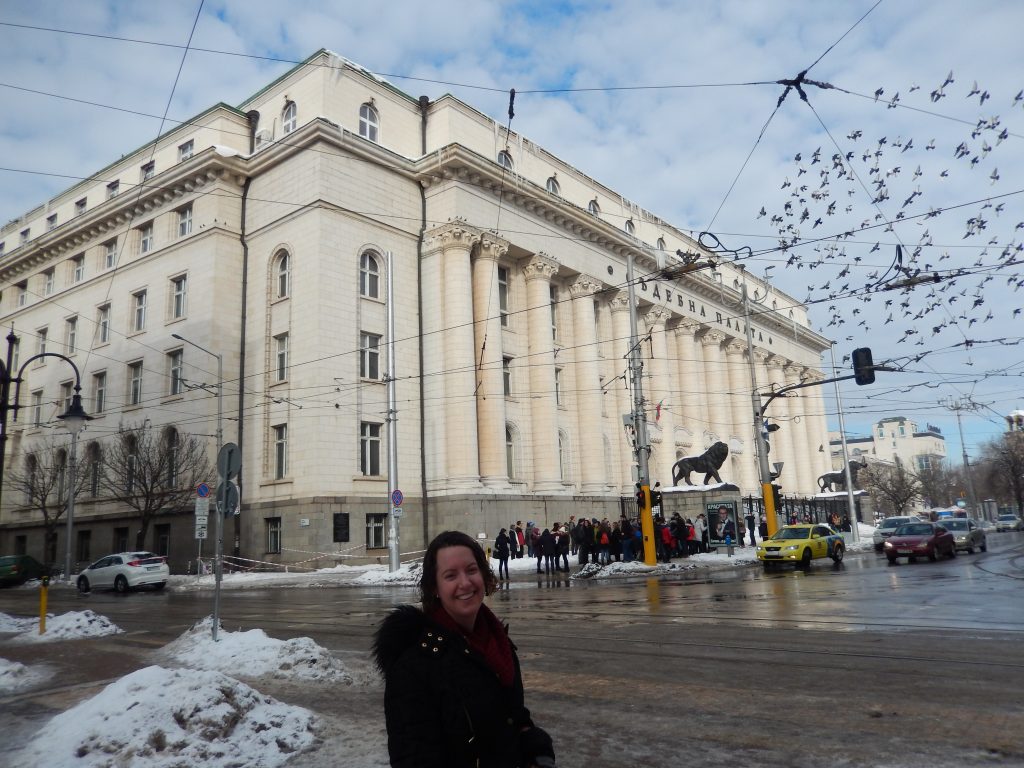 We returned on our flight back to Castellón with much turbulence on landing. Dreamer was NOT pleased. Asking the locals, this is apparently a very common occurrence with flights to this airport. Seems nobody bothered to check wind patterns at the proposed airport flight, nor in which direction the runways should be built.