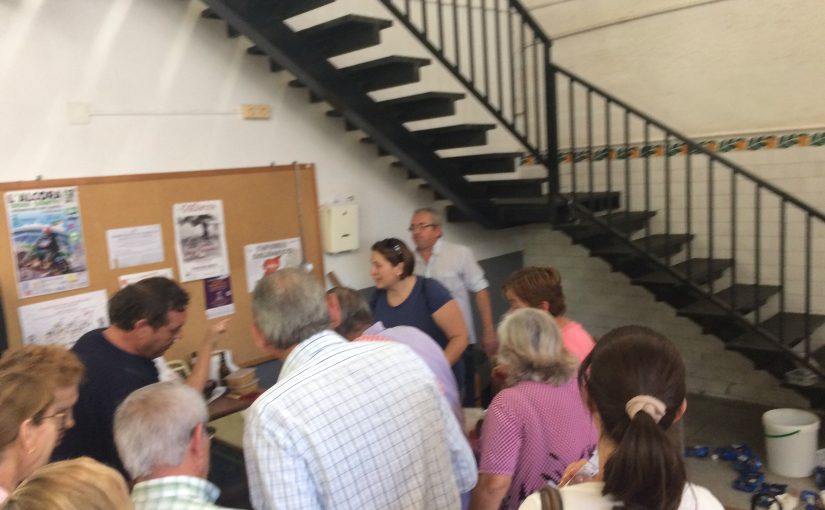 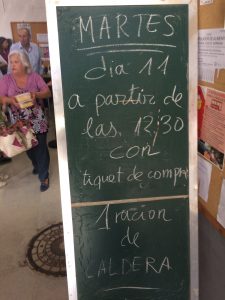 Tuesday, October 11th was a very special day at the local market. Yes, the kind of market where each vendor has a stall. The kind of market I have always dreamed of visiting and buying stuff at. Our town has one, as does every town here; bigger cities of course have several. And I love buying specialty products here.

But this Tuesday, as I entered, I noticed a crowd of people that was not normally there. Tuesday is also the flea market in the area surrounding the market building, but this crowd was not here for that; no, their presence was definitely correlated with the sign above:

My fishmongers advised me I should wait in line. Since I was already buying something at the market, I had my entry ticket and caldera [switch to English at the top; here is another] was a typical regional dish I must try. I protested just a bit: the line was long and I was scared they would run out. No, they assured me – there was plenty.

So into the queue I went, waiting 15 minutes to get to the head of the line. As I waited, I purchased some cheese in one of the stalls next to me as well, so I’d have a portion to share with Dreamer. It did not appear to be one per person but rather one per receipt. Old ladies were leaving with six containers or more.

About two minutes before I got to the serving table, I heard the moans of protest and people arguing over who was first, who should get the last portions. They had run out. Uproar, fury! I sat back and watched, learning that you should never offer anything free to a Spaniard – especially the older ones who’ve made it through a war or two. Woe to the poor beings who instantaneously went from everyone’s best friend giving away free stuff to the targets of an angry mob.

In my usual way, I calmly headed to the nearby gelato stand and grabbed a tiny tasting spoon, then returned to one of the empty pots further away from the mob, sampling some residual stew off the bottom. The verdict? Overcooked and definitely not life-changing. Pretty much what you’d expect for serving a huge crowd. I’ll add caldera to things I need to make in my own kitchen this winter.